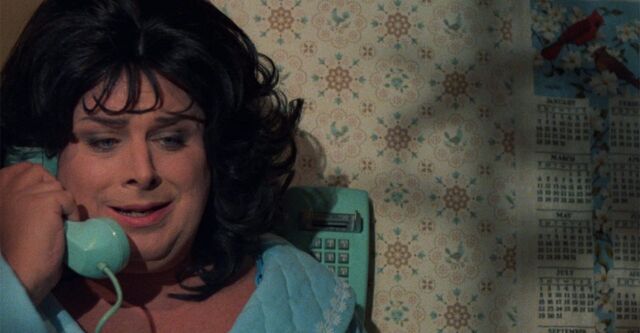 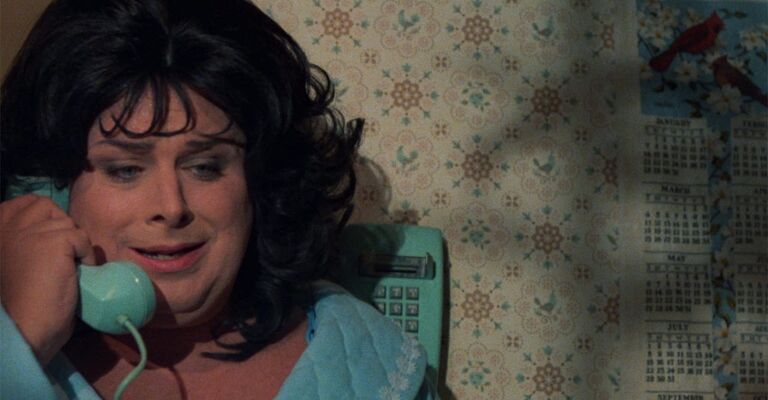 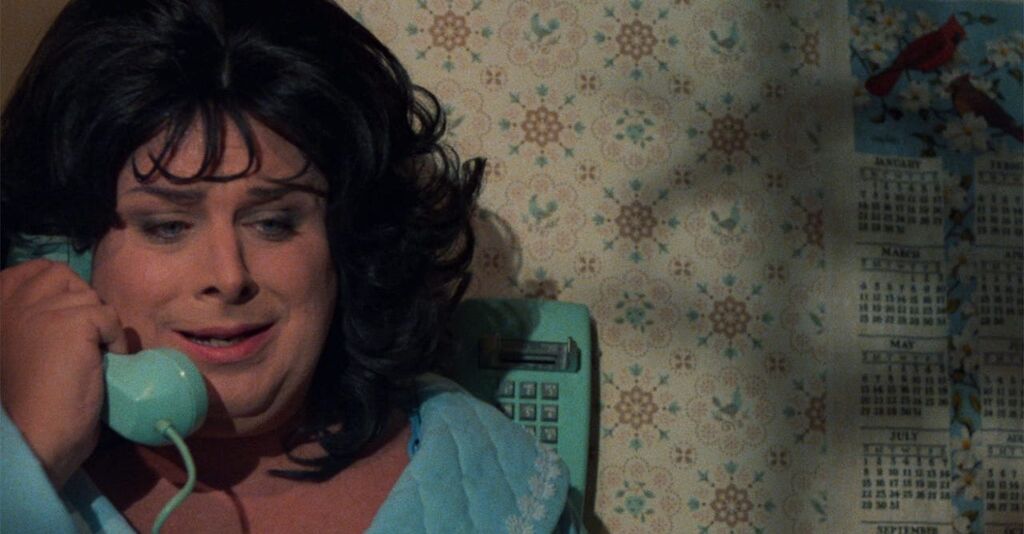 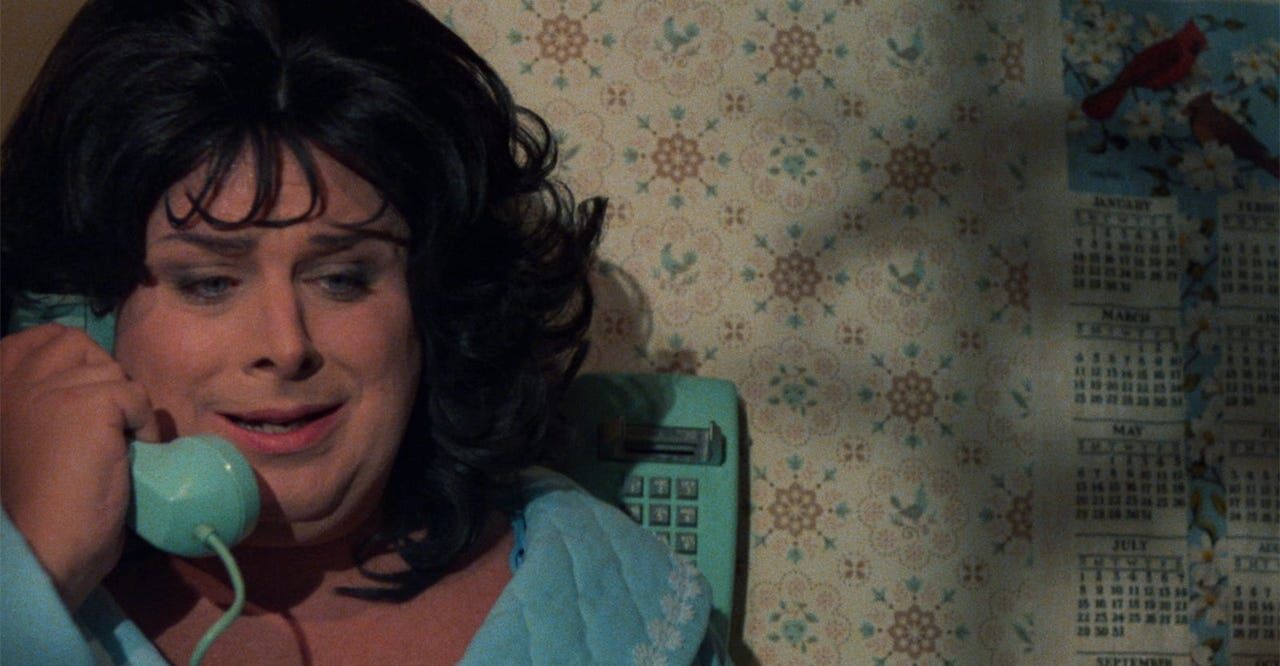 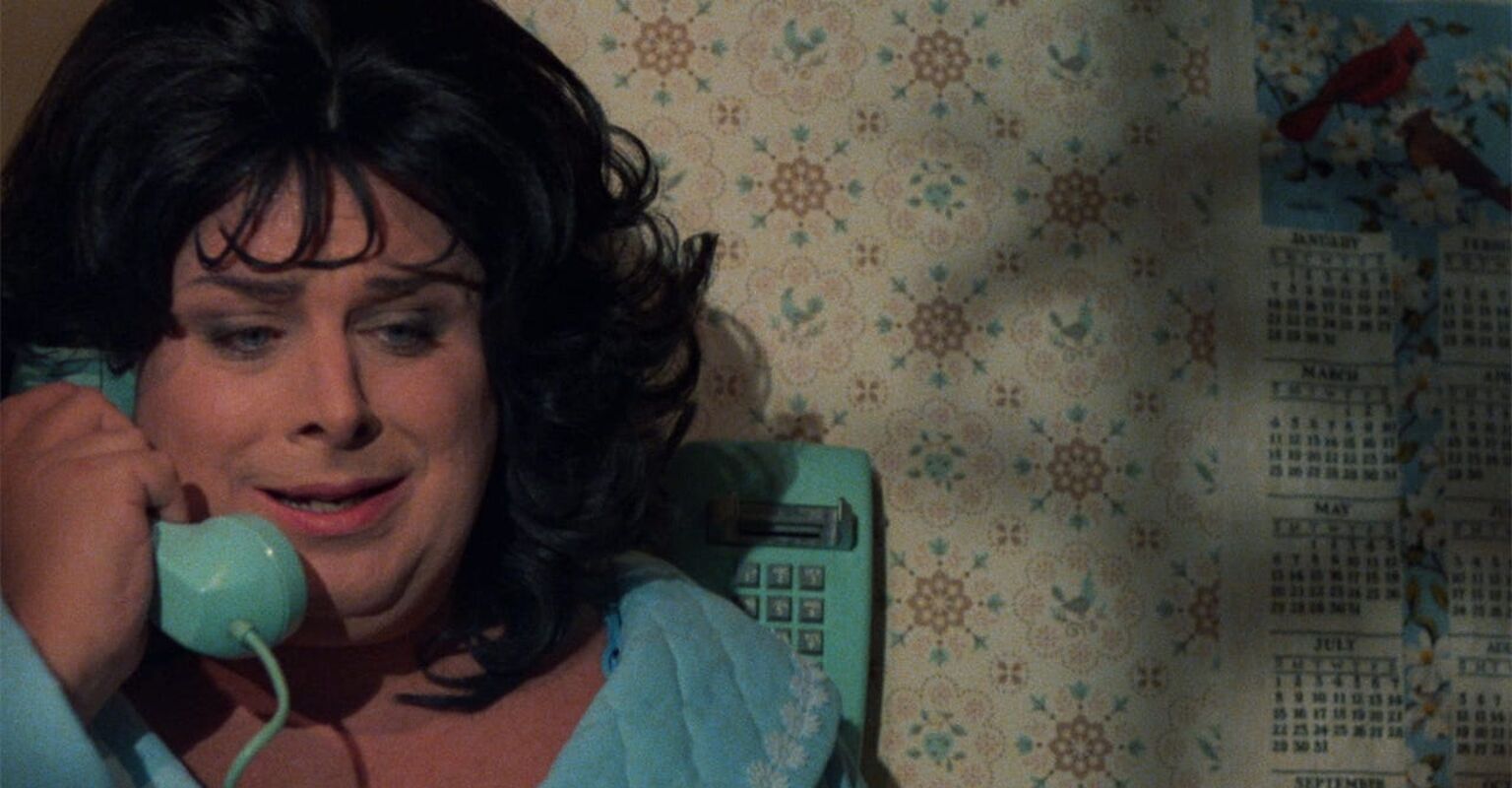 There’s an image that recurs – often in the beginning and end – of Polyester, Serial Mom, and A Dirty Shame, John Waters’ trio of suburban satires. A blue sky, the beauty of nature, and a house protected from the outside world by a white picket fence. It’s a visual cue that immediately brings to mind not only the stock image of the suburbs, but also films that reveal just how hollow that image that is—perhaps most famously in David Lynch’s Blue Velvet, where this suburban backdrop leads to a severed ear on someone’s lawn. Waters is also more than willing to show just how empty the safety and aspiration of suburban life actually are. In all of these films, “normality” is a performance, one that becomes increasingly meaningless as the narratives unfold. It makes perfect sense that Polyester opens with Divine, as long-suffering housewife Francine Fishpaw, putting on her face in front of the mirror.

In Waters’ world, the appearance of suburban normality and perfection is meaningless when it’s so clearly a mask that can’t hide the truth that lies behind it.

All three films open with the morning routines of suburban women; Divine’s makeup, Kathleen Turner preparing a perfect breakfast—only to be distracted by the overwhelming desire to kill a fly—in Serial Mom, and prudish Tracey Ullman avoiding sex with her husband in A Dirty Shame. All three of these women are, according to the rules of the worlds that they occupy, normal.

But by peeling away these masks of performance, the films show how meaningless these definitions of normal are; the perfect houses and picket fences become prisons as much as sanctuaries. What highlights these ideas as performances is how easily the mask slips, which happens most readily in Serial Mom. As soon as Beverly is on her own, she immediately goes upstairs to make vulgar phone calls to her neighbors, harassing Dottie Kinkle (Waters regular Mink Stole) by bellowing “COCKSUCKER RESIDENCE” down the phone.

As the narrative of Serial Mom goes on, Beverly’s murderous compulsions become more explicit and more difficult to hide, but as soon as she’s with her family, she becomes the Perfect Suburban Wife yet again. One of the most striking things about it is the family’s long refusal before accepting the truth about her. After she kills her daughter’s cheating boyfriend, she says to her “you got your wish, dear.” Beverly’s desire to kill is rooted in the lie of suburban perfection; that it’s all for her children, for her family, to stop people from thinking there’s anything wrong with them. For Beverly, wearing white after Labor Day is a capital crime, and that makes perfect sense because in a perfect world—one that matches up with the suburban lie—then nobody would be so vulgar as to do something like that.

By peeling away these masks of performance, the films show how meaningless these definitions of normal are; the perfect houses and picket fences become prisons as much as sanctuaries.

Vulgarity plays a much bigger role in Polyester and A Dirty Shame, particularly the former. As opposed to being a murderer like Beverly, or sex addict like Sylvia (Ullman in A Dirty Shame), Divine’s Francine truly suffers: her pornographer husband cheats on her, her rebellious daughter gets sent to a convent, and her son is the infamous Baltimore Foot Stomper. This is Waters aping Douglas Sirk, master of the suburban melodrama; Francine’s descent into alcoholism is filtered with the vivid, lurid lighting that’s come to be associated with Sirk. The world beyond Francine’s suburban home is dark and evil, the “downtown” part of town is dark and seedy, worlds away from her suburban home. Francine’s insistence that she and her children are a “normal American family,” while she’s in the midst of alcoholism, and her son has just been released from prison, shows just how little a word like “normal” means in Waters’ world. The appearance of suburban normality and perfection is meaningless when it’s so clearly a mask that can’t hide the truth that lies behind it.

Francine’s insistence that she and her children are a “normal American family,” while she’s in the midst of alcoholism, and her son has just been released from prison, shows just how little a word like “normal” means in Waters’ world.

A Dirty Shame takes a different approach, but one that still echoes the films that came before it. Existing along the lines of a war between sex addicts and Neuters, there’s an air of liberation to it, a gleeful acceptance of the freeing power of filth. This echoes the comically inept “down with filth” protestors in Polyester, or the shared love that Beverly and her son have of splatter films. Neuters are the ones that insist that they’re “normal,” and Big Edna insists that Sylvia is a “good girl: she hates sex.” Like the films that came before it, A Dirty Shame shows these suburban wives as being trapped in the lives they need to perform, and continues to explore Waters’ affinity for rebellious, exhibitionist women. The women, young and old in these films, have something in common: they’re all always performing. But the younger ones seem to know it, from the go-go dancing Ursula Udders in A Dirty Shame, to daughter Misty in Serial Mom who endlessly pouts and smiles for the camera, and it’s that knowledge of performance, finding freedom and agency in exhibitionism and filth, that shows the trap that the mothers have fallen into.♦

Sam Moore (they/them) is a writer, artist, and editor. Their work has been published by the LA Review of Books, the BFI, i-D, and other places. They are one of the founding editors of Powder, a queer zine of art and literature; they can be found (and commissioned) on Twitter and Instagram.