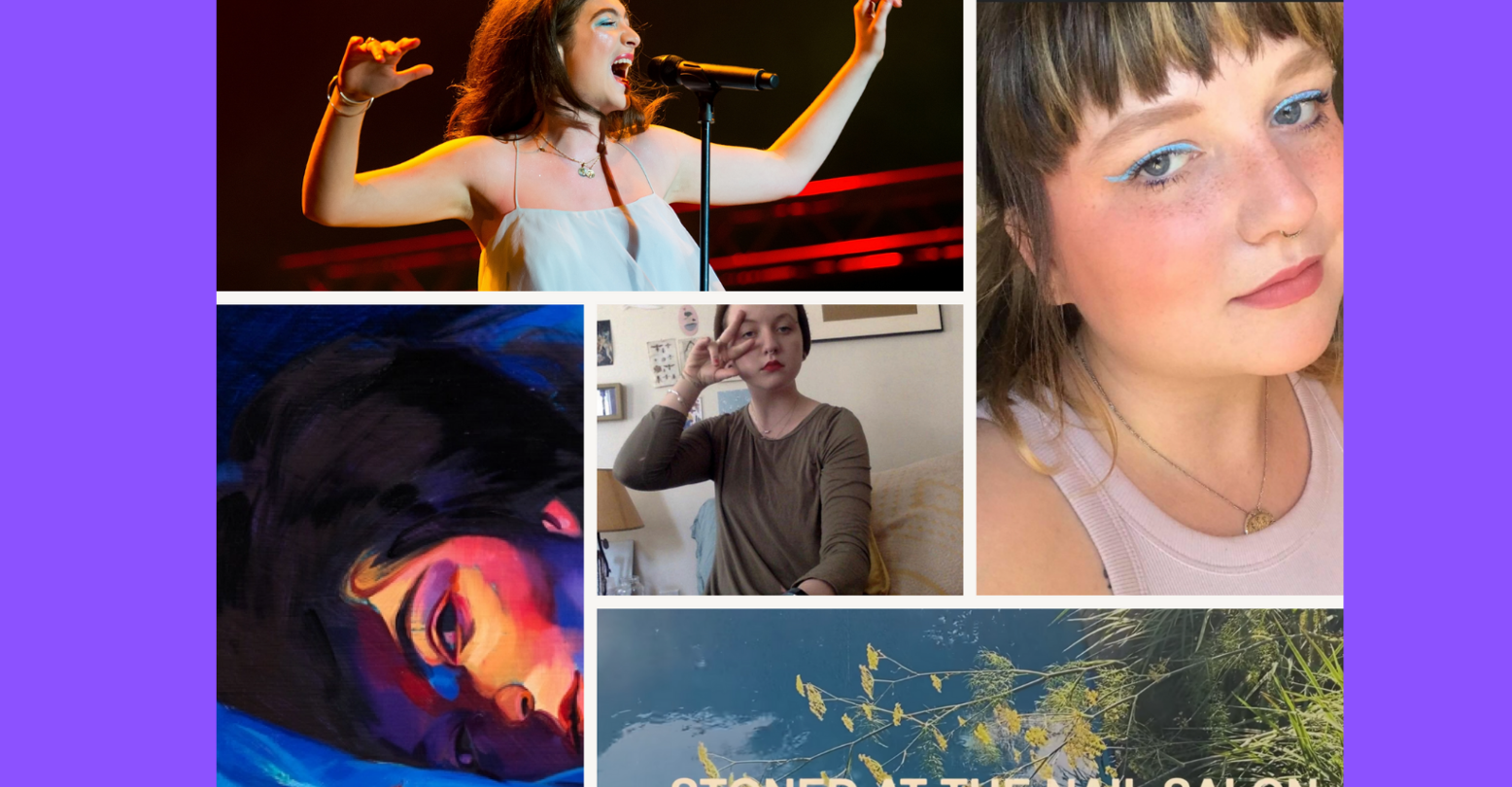 I am twenty-two, weaving between cars in rush hour traffic across the bridge that connects Boston and Cambridge. It’s 3:30 in the afternoon and I’m covered in coffee grounds, post-shift from the weird, lopsided, coffee shop I’ve come to call home. This post-work bike ride is the closest thing to scream therapy I’ve been able to come up with; as I dodge volatile and clueless cars, tell their drivers to “fuck off” and occasionally bash a car door with my U-lock, I find myself able to breathe. My sunburnt bones cool off for a few minutes and I allow myself to fly through an intersection with my eyes closed. Plugged into my ancient cracked iPhone 4, a recurring favorite plays at maximum volume. Lorde’s masterpiece sophomore album “Melodrama,”: it’s delirious, low light, high production, visceral.

My destination is a cheap and crumbling wine bar in Harvard square. My goal: to drink alone on the patio and scribble out poems until I am just buzzed enough to stand the feeling of my sweaty bangs drying across my forehead. As I unlock my bike, the album’s third track bounces through my blurry skull, “Homemade Dynamite.” The husky, clipped vocals describe exactly what the rest of my night is going to be like:

“Our rules, our dreams, we’re blind

Blowing shit up with homemade d-d-d-dynamite

Our friends, our drinks, we get inspired

Blowing shit up with homemade d-d-d-dynamite

Blowing shit up with homemade d-d-d-dynamite”

It’s 6:45 by the time I get back to my apartment, I’ve stopped by the liquor store for my usual five nips of fireball and I’m ready to throw some kind of outfit together. I knock each tiny bottle of instant gag reflex back with relish and smear silver glitter on my eyelids. My friends are taking me to a club in Allston that is the equivalent of partying in a dumpster, but there is dancing there and the drinks are cheap. If you’re lucky some tall blonde girl from UMass will share her blow with you in the bathroom. This adventure makes me feel less alone and empty, I am at home in chaos. After a lifetime of trauma and fear, I feel safe in the surreal experience of being surrounded by others who might also be in the process of crashing and burning in their own efforts to fill that sinkhole in the soul.

My friends are taking me to a club in Allston that is the equivalent of partying in a dumpster, but there is dancing there and the drinks are cheap.

This routine went on in the same fashion for a period of years. Then it escalated: a series of two-day hangovers left me suicidal and non functional. Blackouts, bike crashes I was lucky to walk away from, passing out on the sidewalk in front of my apartment, smashing my face into brick walls, having a seizure in the corner bar (don’t mix alcohol and antipsychotics, it doesn’t go over well.) It doesn’t end there.

Night after night, I find myself drunk and sobbing on the floor of my bedroom. Worried and hurt friends are their wits end. An abusive roommate rains down terror on me and my partner nightly. A restraining order against my mother, a partner struggling with his own demons, and a long list of health issues don’t help the situation.

On my little portable speaker, I would play the devastating“Liability” over and over again. I knew what I had become, yet I had no idea how to undo the mess I had made.

“They say, ‘You’re a little much for me

You’re a little much for me.’

So they pull back, make other plans

I understand, I’m a liability

Get you wild, make you leave

I’m a little much for

I wish I could say this is where my recovery story begins, but it doesn’t. As they say sometimes things have to get worse before they get better.

Let’s rewind for a minute. In 2013, my senior year at a tiny performing arts high school in Minneapolis, Lorde dropped her legendary first record “Pure Heroine,” and to put it lightly, I was thrown for one hell of a loop. But it wasn’t her infamous party anthem “Royals” that caught my attention. It was the deep cuts on the album that were the real earworms, the stoic dreamscape metaphors and whisper-soft aggression behind her voice. Those were the songs that had me shivering in my purple Doc Martens. The album’s seventh track “Glory and Gore” still creeps up and tries to take me hostage, and for good reason, at that time it was a warning. Every pill I crushed and daintily put up my face, perched on my boney ass, in the old rectory turned black box theater. Every trek across the city in a blizzard to score sticky opium and salty grey cocaine from a friend’s older brother. Every bottle hidden under my bed, every morning waking up thinking I was untouchable and terrifying, it was all leading to something much more ominous. The lyrics:

“No-one ’round here’s good at keepin’ their eyes closed

We’ll always win at this, I don’t ever think about death

It’s alright if you do, it’s fine

We gladiate, but I guess we’re really fighting ourselves

Roughin’ up our minds, so we’re ready when the kill time comes

Wide awake in bed, words in my brain

‘Secretly you love this, do you even wanna go free?’

Let me in the ring, I’ll show you what that big word means”

Once, when I was younger, they reinforced that twisted invincible feeling that so many of us have when we’re young and in profound pain. Now it carries a vastly different meaning, and I’ve spent years trying to dissect it. The line that really stands out now, as a sober person is: “Secretly you love this, do you even wanna go free?”  because years later, at twenty-five, when I found myself dying from the devastation of alcoholism and mental illness in a small New England town, I had to stare down the barrel of the bottle and ask myself this exact question. My illness was screaming that this was the only way I was capable of existing and I would simply have to go down with the ship. I can’t say this without mentioning the earlier line:

“I don’t ever think about death

It’s alright if you do, it’s fine”

I, unlike Lorde’s character, was always thinking about death. I was praying for it. Mixing my medication and endless vodka and hoping this would finally be the time I wouldn’t wake up. Fortunately for me, I seem to be a lucky, blessed, and resilient piece of work. I have survived overdoses, alcohol poisoning, attempted suicide, and a freak illness that should have killed me.

Once I decided I was tired of the endless blending of days into nights, failures, losses, selfishness, hospitalizations, causing harm to others, causing harm to myself, and losing pieces of my entire being to this disease, the “melodrama,” as Lorde so wisely puts it in the track “Sober,” I entered rehab. I was introduced to Alcoholics Anonymous. It wasn’t cut and dry: I was terrified, I was resistant, and I did not want to leave behind the only method of coping I had ever really known. After some trial and error, a relapse, and a lot of throwing my Big Book across the room in searing frustration, I was left with an unwavering amount of support.

I began working with a sponsor, attending regular AA meetings, working the 12 steps, and developing a relationship with a higher power, which I’ve yet to fully comprehend but I am held by and find guidance through. Through that, I found shreds myself cracking open geodes of humility, gratitude, faith, and an ability to take radical self-inventory I didn’t think I was capable of. I have found my way into the world of sobriety.

This coincides, oddly, with the latest chapter of Lorde’s strange, scathingly accurate and liver-wringing soundtrack of my journey back from the bottom of the bottle.

It wasn’t cut and dry: I was terrified, I was resistant, and I did not want to leave behind the only method of coping I had ever really known.

Three days ago, her newest track, “Stoned at the Nail Salon,” dropped. When it first found its way to me I found myself a week away from eight months sober, standing in my kitchen with tears in my eyes. The song captures the exact feeling of grieving a former self, however toxic that self might have been, and holding that part of you in loving kindness. I had a moment of being totally overwhelmed. As you gather more sober moments—hours, days, weeks, months—it becomes your normal. You don’t ever take it for granted, but it no longer runs your entire life, it becomes surprisingly easy to settle into this new normal and just roll with it for periods of time. You do your recovery work. You show up. You put your life back together piece by piece.

Well, my hot blood’s been burning for so many summers now

It’s time to cool it down, wherever that leads

‘Cause all the beautiful girls, they will fade like the roses

And all the times they will change, it’ll all come around

When you have a moment of surrender and realize that you’ve somehow managed to pull this off, it’s pretty incredible. Lorde’s song is a reflection on the passage of time, the daily things that exist around you, and a sensitive homage to a naive, aching, and dangerous past. So here I am, sober in the nail salon. ♦

Jade Alexis Wollin (they/them) is a nonbinary poet, storyteller, and multimedia artist living in Western Massachusetts. They are dedicated to promoting destigmatization through sharing honest, compassionate, and sometimes comical insights into their lived experience with mental illness, addiction, and chronic illness. They have been published in The Boston Hassle, Bloodroot Literary Journal, Art & Letters, The Bodily Press, and have one chapbook (The Good Death, 2016.)

You can check out their current daily video project on Tiktok @humanairplant and follow them on Instagram @Jadealexisdanger.