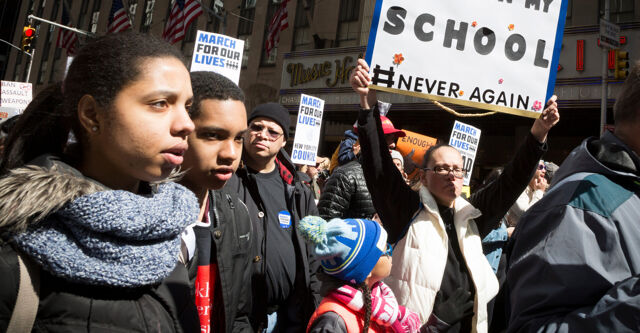 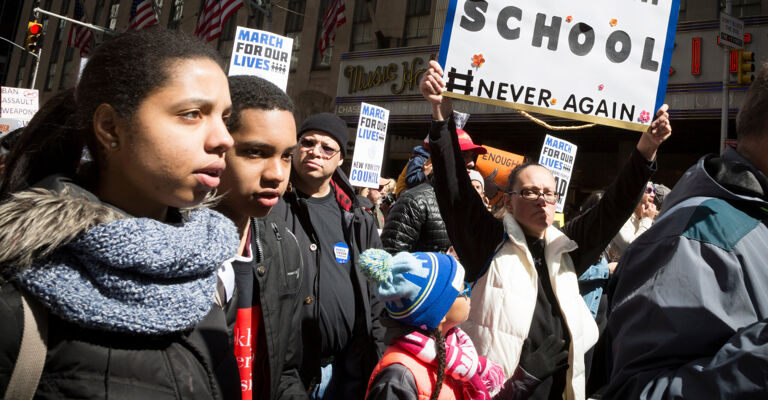 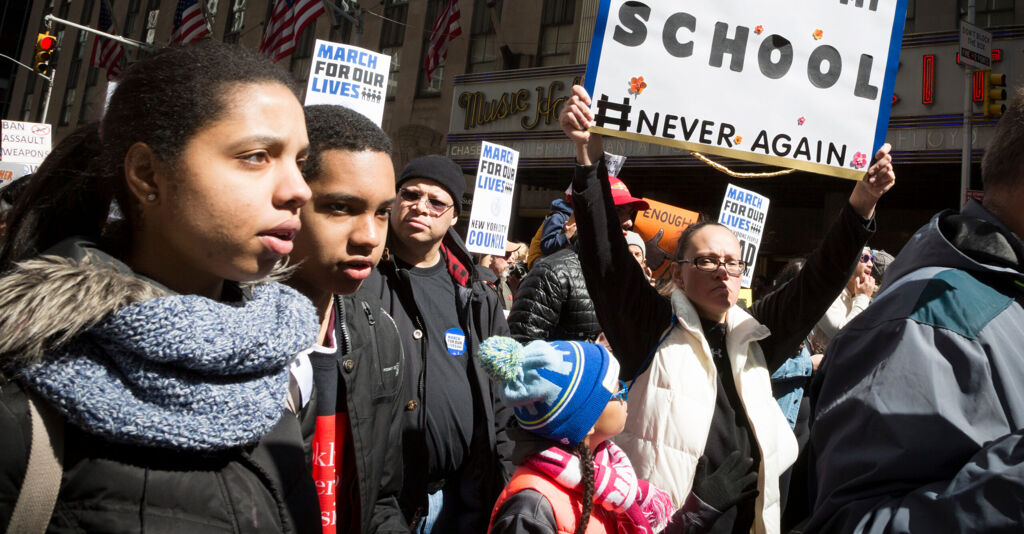 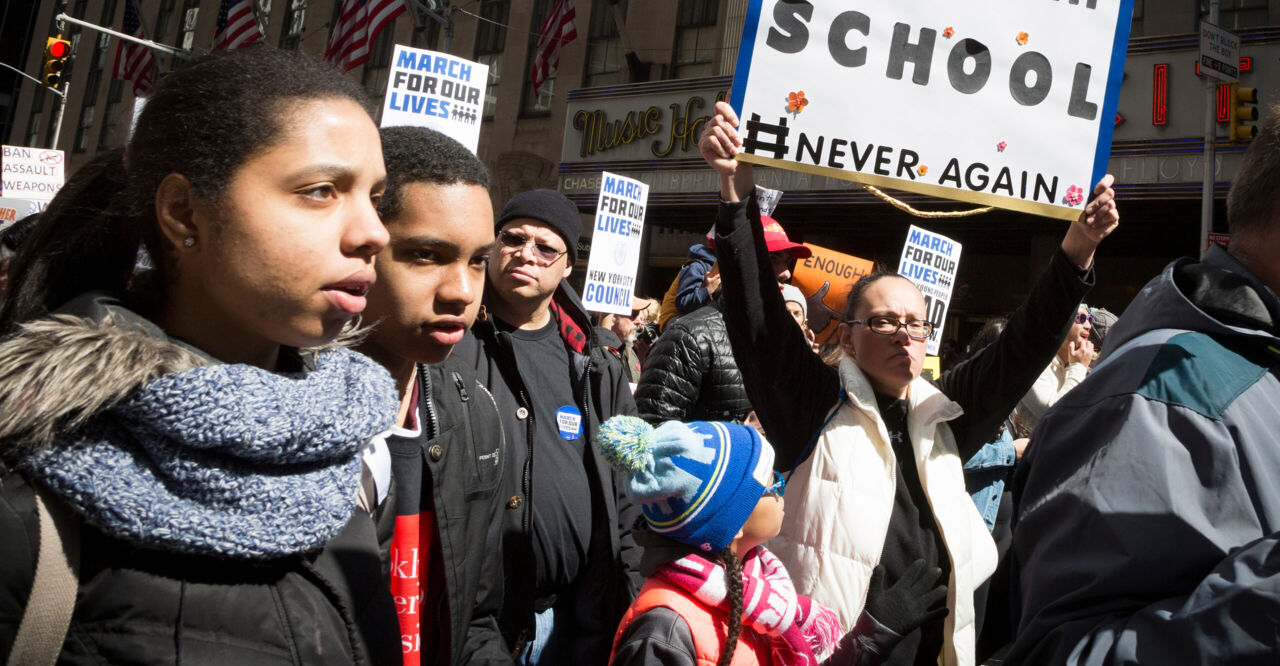 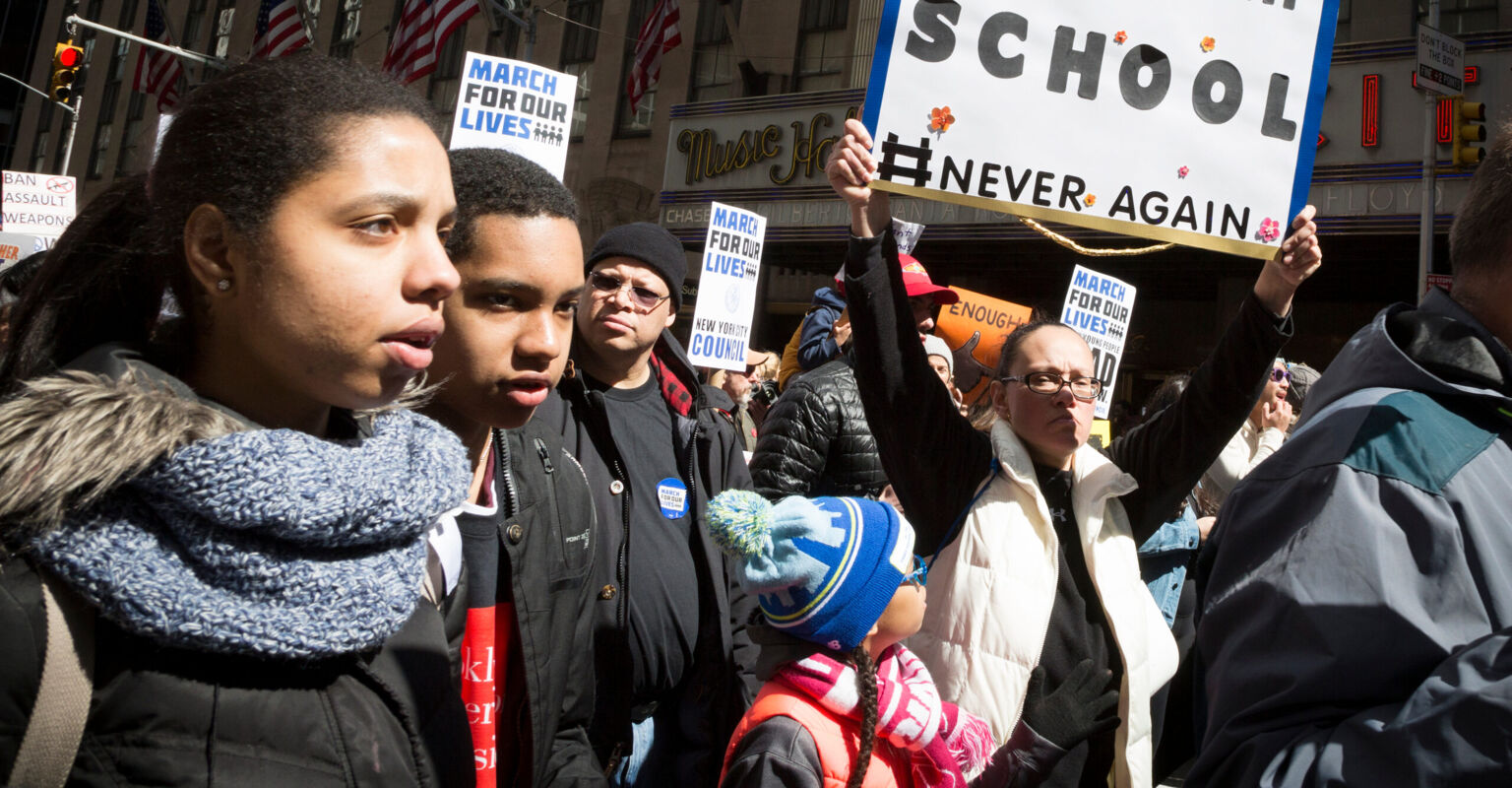 This story from the INTO archives is part of our seven-part series, in which we’ve asked queer voices to respond to the surge in gun crime and the sixth anniversary of the Pulse shooting. We hope these varied perspectives encourage dialogue and change to end the needless violence plaguing our country.

Seven activists from Gays Against Guns (GAG) screamed as they dropped to the floor for a “die-in” in the Hart Senate Building in Washington, D.C. on November 6th, 2017. All were arrested and released shortly thereafter, but their message was clear: The appalling state of U.S. gun laws has landed us in the middle of a very deadly public health crisis, and our government must find a cure.

Borrowing ACT UP’s unmistakable “in-your-face” tactics, GAG declared that just like any other epidemic, gun violence is not only contagious: it is also fully preventable. This time it was a down and dirty die-in, but GAG also regularly employs white-clad, veiled “human beings,” silent activists embodying the victims of gun violence, to haunt and shame political, commercial, and financial figures and institutions accused of inaction or profiteering from the crisis.

Bawdy chants and signs, irreverent political performance, and media savvy messaging have also been inspired by the work of ACT UP and enlisted in an effort to force the public and the government to address gun violence as the public health crisis it is.

The appalling state of U.S. gun laws has landed us in the middle of a very deadly public health crisis, and our government must find a cure.

Much like HIV/AIDS activists did 30 years ago, “GAGtivists” and some of their GVP allies are confronting policymakers in Congress and scientists at the CDC with the fact that they are not doing their jobs. GAG chapters in New York, New Jersey, Washington, D.C., Provincetown, and Orlando are now creating a shift in the gun violence prevention (GVP) movement by purposefully sidestepping the entrenched rhetoric of “gun rights” and “thoughts and prayers,” framing the ferocious debate in more objective public health terms. 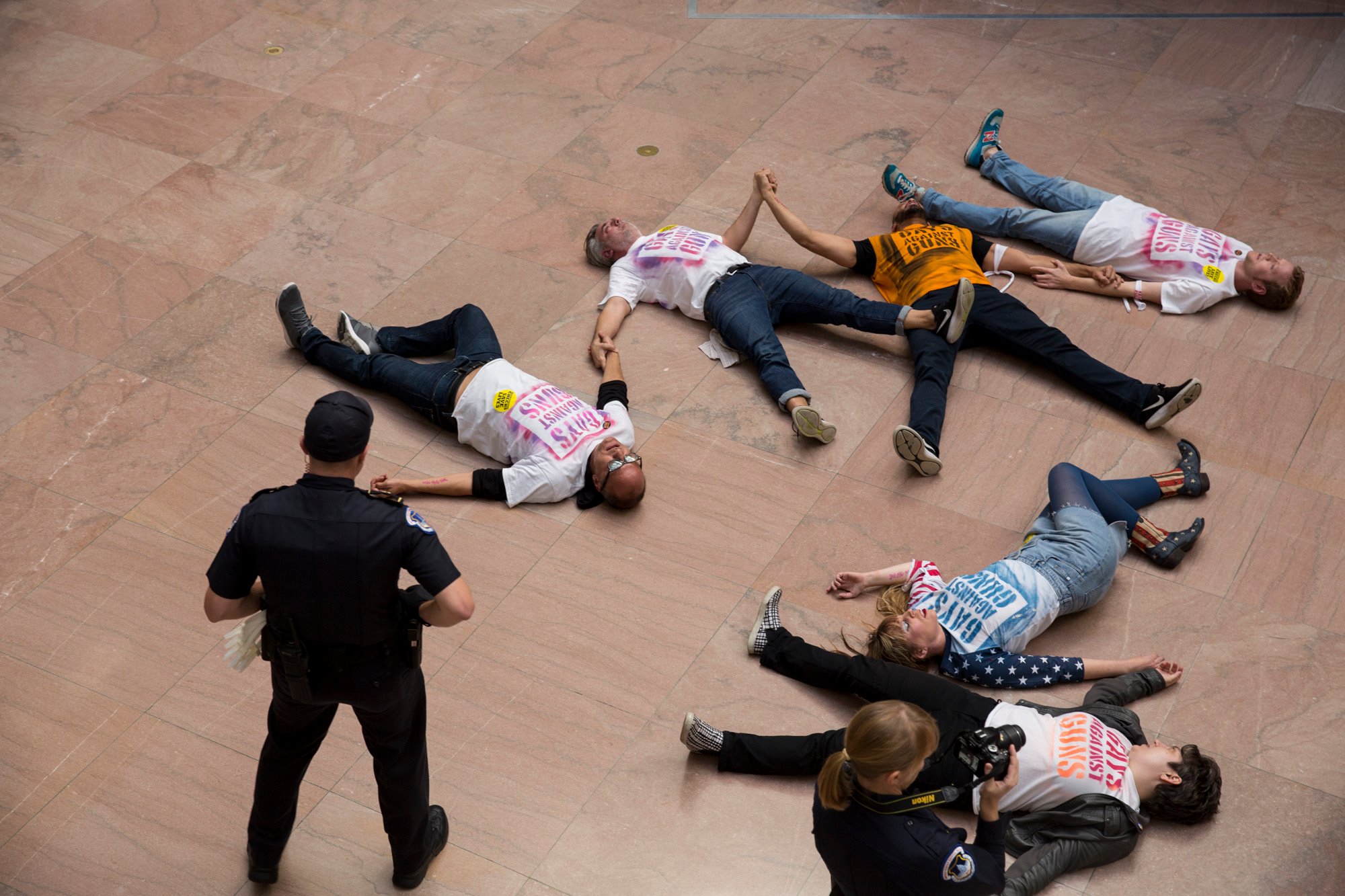 As with the history of HIV/AIDS research, scientific study into the gun violence epidemic is being stymied by a conservative bias that views the majority of the plague’s casualties as being responsible for their own deaths and thus, not worthy of being saved. When Gays Against Guns formed in June 2016 immediately after the Pulse nightclub massacre in Orlando, gun rights advocates immediately messaged the group’s Facebook page and website. They declared that the LGBTQ victims whose blood covered the dance floor that night would have been able to fight off their attacker had they been armed.

Judging by their lack of action, Congress and the CDC agree with that perverse sentiment.

Similar to Big Pharma companies in the 1980s and 90s who dragged their feet finding HIV treatments and then marketed the drugs at exorbitant prices gun manufacturers, investors, and lobbyists devote huge amounts of energy and money to keeping federal gun regulations lax, so their bottom lines remain untouched. That presents a significant challenge to GVP activists, but history shows that continued application of the right pressure tactics can produce results.

When ACT UP stormed the Centers for Disease Control (CDC) in Atlanta and the National Institutes of Health (NIH) in Washington, D.C. in 1990, they used banners, costumes, and lots of noise to compel those stubborn institutions to expand the definition of AIDS to include symptoms that were more common to women and people of color. As a result of the group’s confrontational strategies, the definition was expanded. Almost 50 percent more women were diagnosed with AIDS, enabling them to receive expanded benefits.

Much like their predecessors in the HIV/AIDS treatment struggle, today’s breed of queer GVP activists realize negotiations are not on the table, so they have embraced their outsider status and put their bodies on the line. The die-in arrestees in the Hart Building in 2017 were preceded by 10 activists arrested during a sit-in at Senator Marco Rubio’s Florida office in 2016, one month after the Orlando massacre. No doubt, more will follow.

A Not-So-New But Growing Epidemic

An epidemic is defined as a widespread occurrence of infectious disease in a community at a particular time. In 2014, there were approximately 33,000 gun deaths in the United States, and that number jumped to 38,000 last year. That’s almost 100 gun deaths daily, which comes out to one fatal shooting every 14.4 minutes. Certainly, the dramatic increase in the overall number of gun deaths and the much higher rates in states without strong gun control laws signal that gun violence is increasing significantly over a relatively short period of time. That screams “epidemic.”

To treat any epidemic, you must first study the means by which it is transmitted and then develop a contagion model. But the U.S. government can’t do that: In 1996, the Dickey Amendment eliminated Congressional funding allocated to the CDC for gun violence studies. After an earlier CDC-funded study found that guns in the home were associated with an increased risk of homicide, the National Rifle Association (NRA) embarked on a massive, successful campaign to block any further studies that might “advocate or promote gun control.”

Since then, the $2.6 million previously used to research gun violence annually has instead been earmarked for traumatic brain injury studies. The CDC has never again used federal funds to investigate gun violence, and popular outcry has not been strong enough to challenge this.

But there is also plenty of evidence that says gun violence, in all its virulent forms, is contagious.

The three main causes of gun deaths in America—homicides, suicides, and mass murders—all lend themselves to the contagion theory. When breaking down the total figure, it is important to understand that approximately 62 percent of those deaths are suicides, while the rest are homicides. While mass killings grab headlines on a near-weekly basis, they account for approximately one percent of the overall homicide figure. However, all three categories of deadly gun violence (i.e., individual homicides, suicides, and mass killings) carry epidemic-like traits. 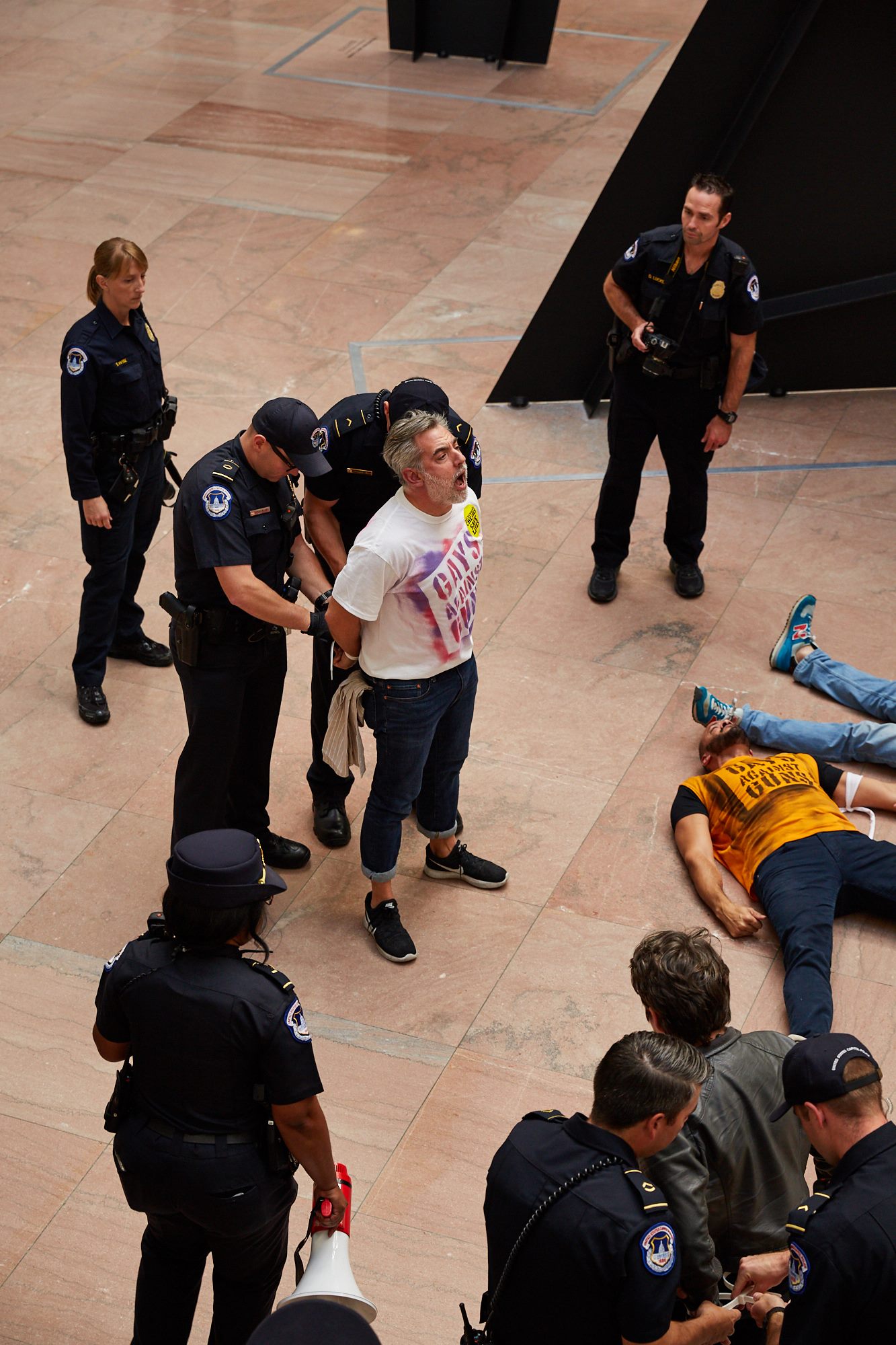 A Yale study published in January 2017 found that the spread of gun violence could be compared to a social contagion because it tends to be “transmitted” through networks of people. Applying an epidemiological analysis to over 138,000 individuals arrested over an eight-year period in Chicago, scholars found that 11,000 subjects were shot and 63 percent of those shooting victims were socially connected to someone who had also been shot.

These subjects, predominantly young black men living in racially segregated and economically disadvantaged communities, were facing greater risks for shooting just by the nature of their social circles. Year after year, half the victims of all gun homicides are young, black men.

A 2016 Centers for Disease Control (CDC) study revealed that suicide rates in the United States grew by 24 percent between 1999 and 2015, with over half attributed to guns. Suicide attempts involving a gun are successful close to 90 percent of the time, and suicide can “spread” among clusters of adolescents, especially with heightened media coverage. Significantly, suicide is the second leading cause of death among LGBTQ youth.

While mass shootings in Charleston, Orlando, Las Vegas, and most recently, Sutherland Springs, Tx. struck very different demographic groups in disparate parts of the country, the increasingly grisly facts of each incident and the mounting numbers of deaths in each incident point to the role of contagion.

Gun massacres when multiple individuals are shot or killed simultaneously in one place have increased in number and in degree of deadliness in the past two decades. Scholars at Western New Mexico University found that approximately 10 times as many mass shootings were recorded in 2015 as in 1999. There have already been 394 shootings in 2017 (at the time of writing), even with a little over six weeks left to go. Researchers with WNMU also theorized that contagion could be to blame here, singling out the role of media in exacerbating the spread of violence.

“Mass shootings are on the rise and so is media coverage of them,” wrote the psychologists.

The 24-hour news cycle and the social media saturation that accompanies these increasingly horrifying slaughters, they conclude, seem to entice shooters searching for a warped sense of glory. In this sense, mass shootings operate very much like a contagious disease, with copycat killers acting as the virus and mass media as the vector for accelerated transmission. 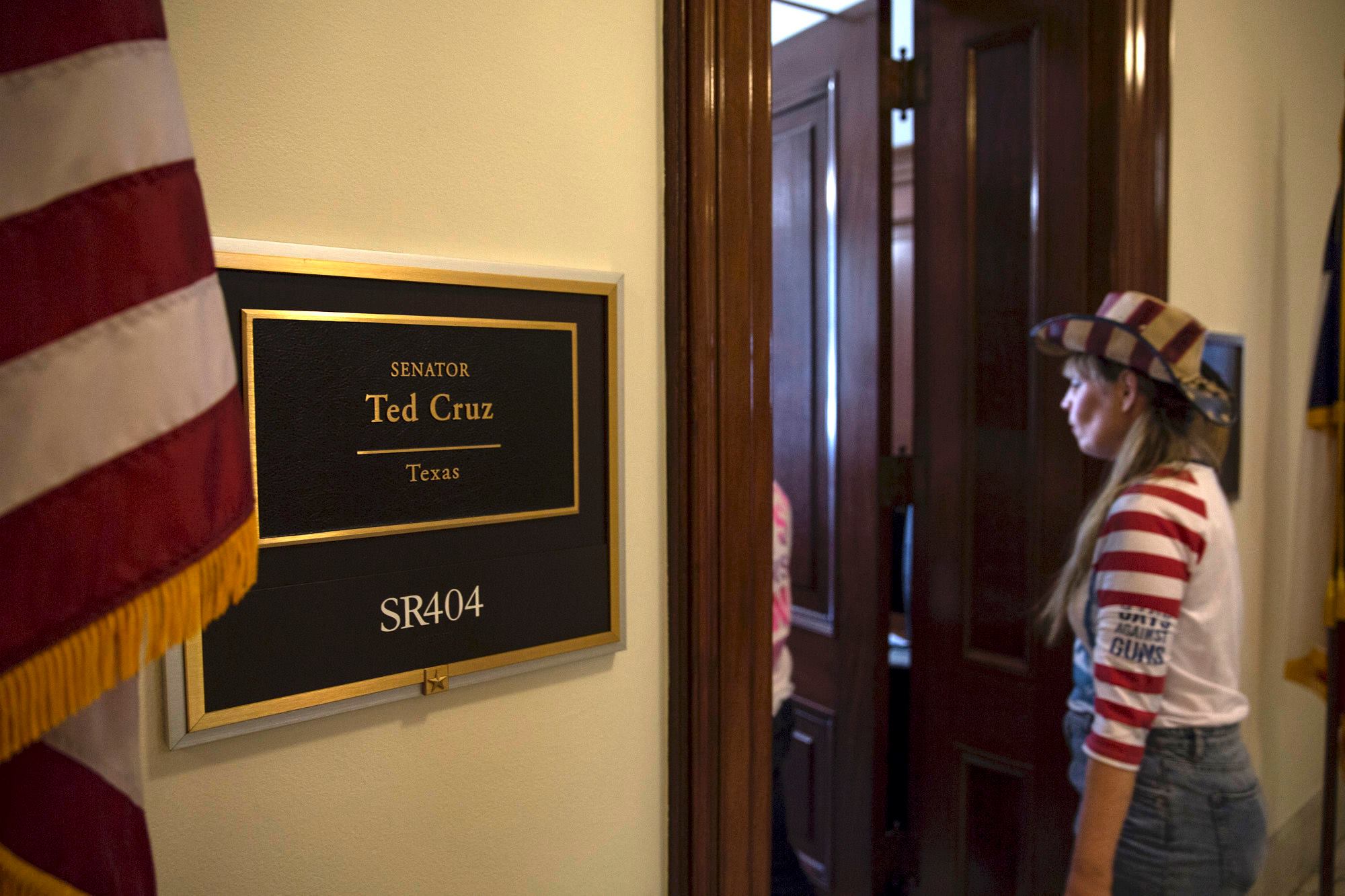 How To Survive The New Plague

Ultimately, AIDS activists were victorious when their boisterous (but fact-based) tactics humanized the conversation around HIV policy and pressured policymakers to take their demands for research and treatment seriously.

It will take the popularization of similar efforts around the discussion of gun violence as a public health issue to prompt more communities to realize what is at stake. All of us must unequivocally demand that our government implement systemic changes to America’s broken gun policies.

As GAG brings public health messaging to its protests, its media, and its public, we are eager to talk. But we are also eager to fight.♦

Terry Roethlein is the communications manager at Gays Against Guns (GAG) New York and at the Center for Economic and Social Rights.