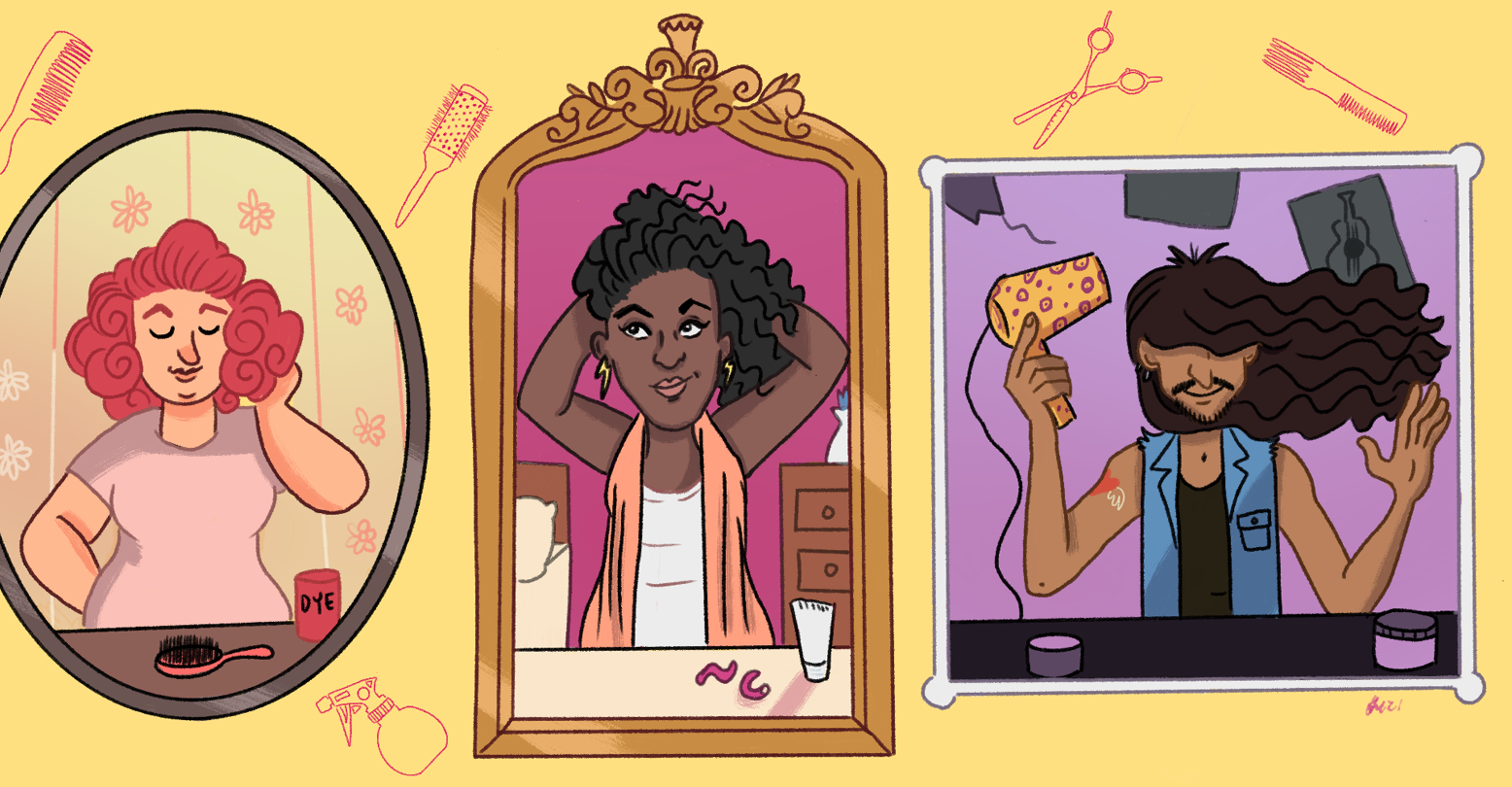 Welcome to Hair Week on INTO! This week, we’ll be exploring the thing we love to hate the most: our hair. Queer hair is a whole thing, and everybody’s queer hair journey is different. Today, INTO contributor Becca Barglowski remembers their first de-lousing, and the queer hair awakening that followed.

The electric shears are buzzing. At least, they should be buzzing, but the individual chattering teeth are seemingly clacking together with fits of laughter. Turned on, off, and then on again, the sound remains the same. For these specific clippers—having cut the hair of my father and brothers for decades—knew much of men but little of me. The steely points chitter obnoxiously amongst themselves as they recall the circumstance under which we had previously met only once before.

It was way back in 2005, when much of queer adult life was lived covertly. Because I was a second-grader, most of my life was led in a way that simply didn’t work for me. While adults practiced self-preservation, a childish receptivity kept me squarely in the world’s line of fire. I wanted to do and be as I pleased with a foolish intensity.

For someone so interested in pleasing others, to be good meant being easily recognizable as a whole person while remaining unknown as an individual.

The things I wanted were not by any means unrealistic for the average eight-year-old, but what became extreme was the extent to which I’d go to satisfy these fairly ordinary cravings. Obsessions replaced hobbies as fixations did friendships. More than anything, I wanted to be good. Immediately upon being met, I wished to be held up at arm’s length, viewed from all angles, and then deemed “good” in the fashion of a painter instinctively deciding which singular brushstroke is the last of any piece.

For someone so interested in pleasing others, to be good meant being easily recognizable as a whole person while remaining unknown as an individual. My personality passed around predictable and pleasing archetypes: the teacher’s pet, class clown, the girly girl. Without regard to the consequences, most decisions were made with a hunger for the instant gratification of cheap appreciation. Looking back, it’s fair to label the year 2005 and all its subsequent suffering as the start of a very involuntary growth spurt; one that began with an uncontrollable elementary school lice outbreak and continued long after the first touch of electric shears to the base of my skull.

I wanted to do and be as I pleased with a foolish intensity.

As soon as my mother jokingly suggested dehousing the lice with a buzz cut, the idea presented itself to be an instant fix. After quarantining from school for weeks on end to no avail, I was hooked on the mere thought of returning to my peers, of plugging back into the main vein that fed my confused sense of purpose. So, being the hero I thought I was, I did it: I shaved my head to go back on the last day of second grade. I did it for them because that’s exactly what I wanted.

Is gender euphoria taking pics with my airpods sticking out pic.twitter.com/jK7GWXZmfa

The electric shears are still buzzing. Only now, I hear it loud and clear. My classmates were laughing at me. At twenty-three, I still hear the laughter. I hear the pretty girls at summer camp asking me why I would wear a skirt if I, bald and flat-chested, were a boy. I still remember feeling so small. That is how I know I’m not doing this for anyone else. Hands tremble from fear and vibrations as I shave my most feminine feature to befriend the long-neglected boyishness within my body.

What I’m going for this season is a body with a handsomely aerodynamic skull. I used to believe the dead hair at my feet made me beautiful. A part of me wants to romanticize my long locks even now, and so I will: those scattered remains are going to be weaved cozily into a bird’s nest. When I daydream about a detached piece of myself finding new purpose in the natural world, and then later place my chopped hair in the backyard, I finally feel as if the spontaneity of unreserved nature interacting with my hair indicates a return to the original self.

With my cowlick combed into a coiff, I will just be.♦