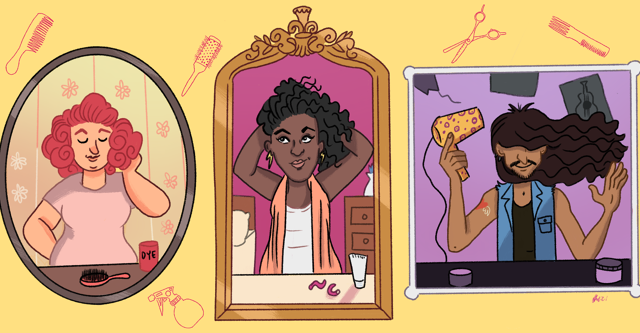 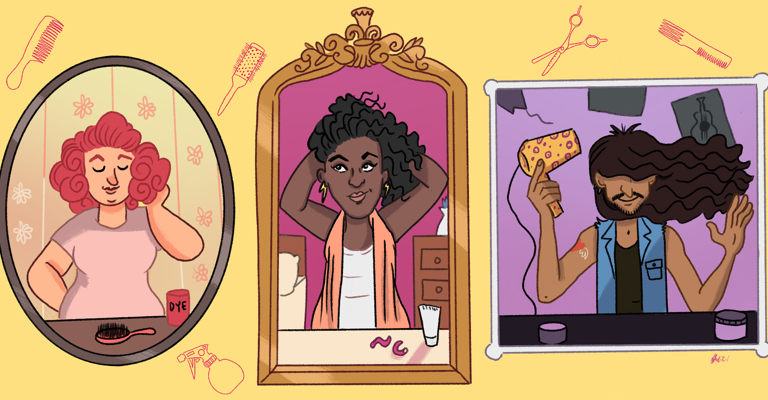 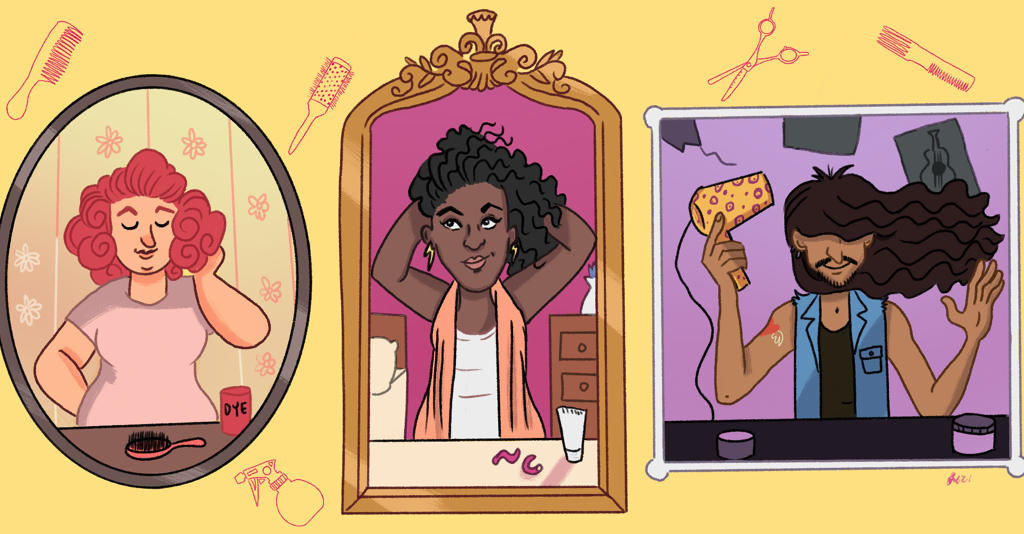 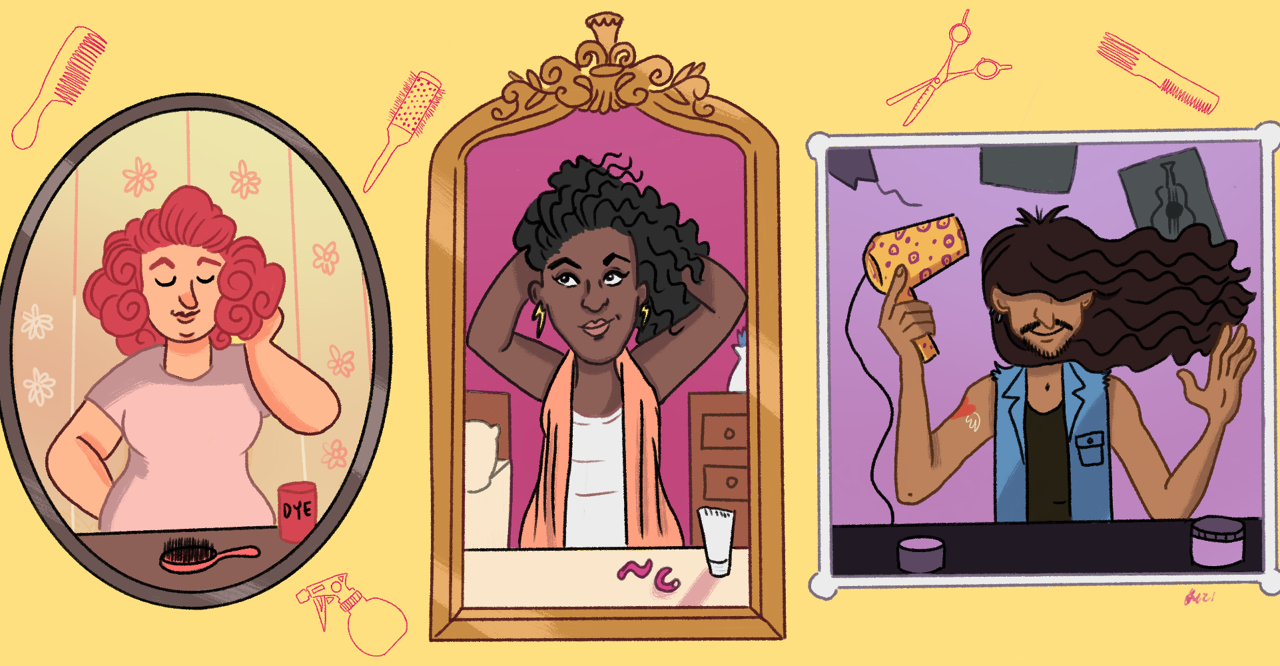 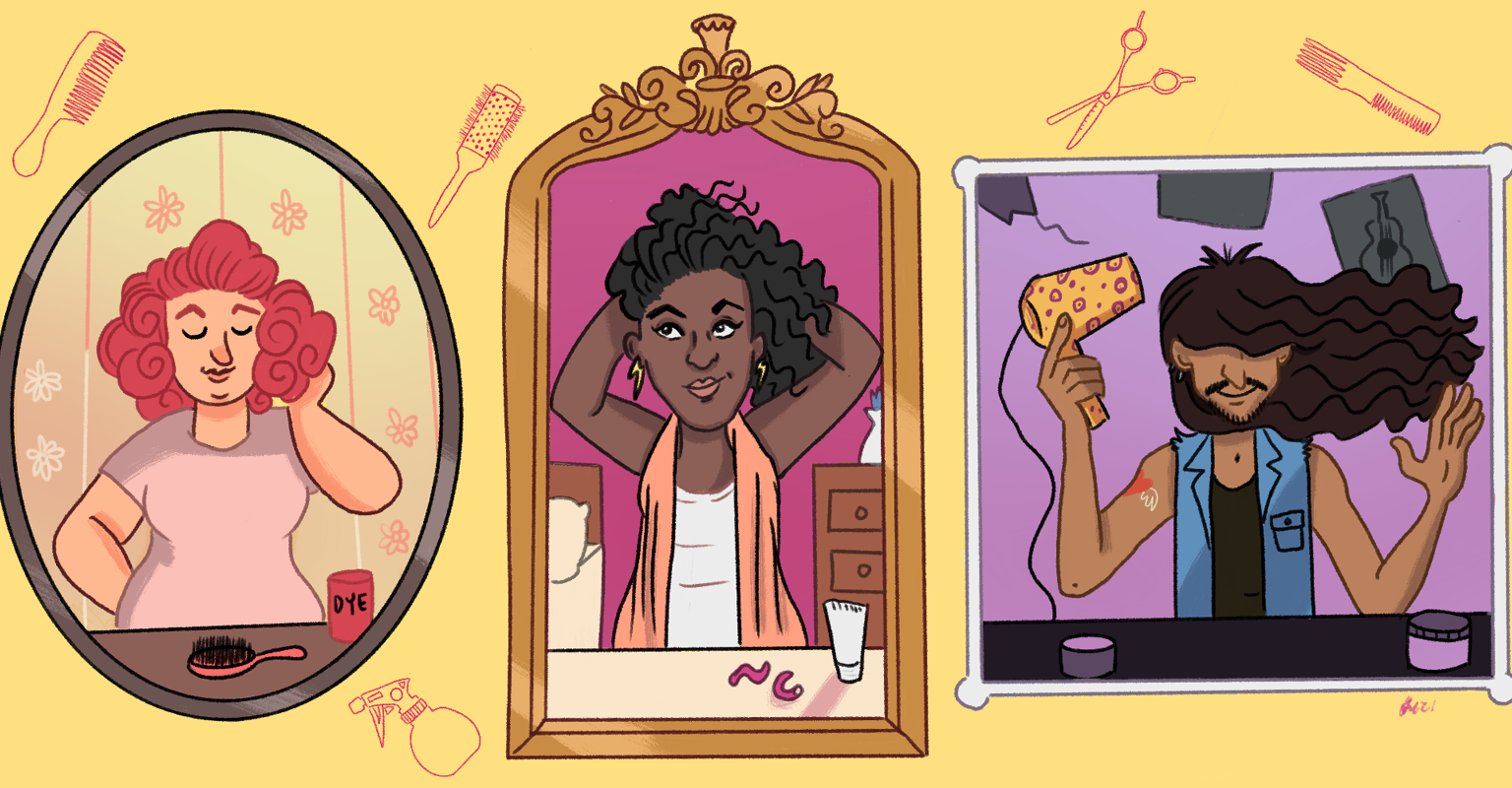 As long as I’ve been conscious, I’ve hated my hair. It was always there, and always overwhelming. I was always told by adults that I came out of the womb with a mohawk: the baby pictures confirm it. Every photo I’ve seen has me looking fresh, wrinkly, and pissed off with a slick bang across my forehead and one chunk standing straight up in the air.

Not much has changed in 30-odd years. My hair has always made it very clear that it’s gonna do whatever the hell it wants, no matter what. If it wants to stand up straight or just list to one side all day, that’s just what’s going to happen. Product? Useless. Straighteners? Who the fuck are you kidding!? Using product on this shit is like trying to put out a fire with hand sanitizer. If there’s one thing for sure, it’s that my hair outnumbers me. There’s never been much I can do about it except let it do its goddamn thing.

Perhaps that’s why, for about 15 years, I tried to have as little of it as possible on my head. Because my hair journey—like so many other queer folks—has been long, storied, and shitty. Strap in.

I’m in Kindergarten and I’ve opted (rather, my parents have opted) for a Louise Brooks helmet cut. This is the first and only time this look actually works on me, because after puberty something will happen to my hair to make it horrible and unmanageable, but for this brief moment, I’m actually enjoying the look, mainly because I’ve told everyone at school that I’m a boy and they’re like, “yeah ok.”

I’m still rockin’ that bob, now without bangs, but it’s not reading quite as unisex as it used to. Soon enough, I’ll let the bob grow out, not because I don’t like it anymore, but because I’ve left my body entirely. I don’t know exactly when it happened, but I do remember losing a chunk of time between the ages of about 12-15. I was going through puberty, but do I remember it? Nope. Not even a little bit. One day I got my period, and the next day I woke up and was 16 and had boobs and realized I needed to go to the store and buy a bra. That’s literally all I remember. The in-between time clearly exists, because I’ve seen pictures. But that kid—with compulsively waxed eyebrows and a half-assed ponytail—is very clearly Not There. He’s staring into the camera with a dead look in his eyes, wondering what the hell is going on.

I wake up from the puberty nightmare, and there’s hair everywhere. Body hair, head hair, hair on my fucking toes, because apparently I’m a hobbit. My hair is very long, almost to my waist, and I keep it that way for a long time. Mainly because that’s how all my friends are wearing their hair. My friends are cis girls in jeans and t-shirts. We all have huge tits and long hair and talk like Angela Chase from “My So-Called Life” even though that’s technically too old a reference for us. We’re the Ghost World girls—we don’t give a shit about high school or college or whatever the fuck else. Because who does? I’ll keep my hair long until senior year, when I attempt the Louise Brooks bob once more. It will be a disaster.

I come out as trans. I don’t know what this means for my hair.

First I don’t really understand how to come out—do trans people “come out,” I wonder? The internet isn’t much help at this point. I realize that I’m afraid of cutting my ass-length, now curly hair, because I’ve been used to hiding away inside of it. I’m the Ring girl: I don’t want my face to be seen. I want to disappear behind my velvet curtain of hair.

Nonetheless, I don’t know what else to do to signal to the world that I’m gay, so I go to the Aveda salon where you can get cheap haircuts from the students. I tell them to chop it the fuck off and give it to Locks of Love. The hairdresser shears it off in layers, I become emotional and try not to show it. At the end, she gives me my hair—four long, braided chunks—in a Ziploc bag. She tells me to mail it off and that I’ll make a lot of bald people happy.

I resist saying “Mama, I am a happy bald person.”

But I’m not quite bald yet. I look like a fuzzy baby chick, says one of my high school friends who still has her long hair. That night, as I turn over on my pillow, I marvel at how light and easy it is now. To move without all that weight.

I’m sick of having my classic high-and-tight grow back into a horrible chipmunk shag. I decide to take matters into my own hands by using my disposable Bic razor to keep the sides shaved close every night, creating a kind of reverse-tonsure that will become stylish a few years later. I use this practice to take out my anger on myself at the end of the day. Living in New York makes me so mad and I don’t know why. Sometimes I hack away at my bald skull until I bleed. I get out of the shower, wipe the fog off the mirror, and see myself with blood running down the sides of my scalp. This feels good and right. One night, in search of something like queer community, I go to a lesbian bar, even though I know it’s not right for me. Somebody shouts over the music, “you look like Travis Bickle!” I leave immediately.

I’m still shaving my head, now every other day. I’m letting the top grow out until it gets curly and I look like an Italian in those old Ellis Island photos, but punk. I’m still trying to figure out how to hold my head. I’m drawing my eyebrows thicker, above the line. Later on I’ll start filling them in from the bottom to make them look less shapely and more masculine: Morrissey-style caterpillars.

Sick of my hair, sick of my silhouette, sick of quarantine, I start letting the hair grow around the sides. I always had this idea that if I just gave myself a traditional masculine cut it would still look weird, or have too much volume to lay flat. A pair of at-home clippers fix this problem– I can do touchups whenever things get too unruly, which ends up being once every few days. Soon, I have a fluffy-ish flattop that matches something I’ve seen in my head before. It’s also weirdly close to the hair I had when I first cut it. I don’t look like a baby queer anymore. I look like an adult, at least. I still get misgendered every single time I leave the house, but it’s been 10 years of that now. I’m used to it. I know how to do it now. Years of learning taught me how to have hair I don’t hate. Slowly, the self-hatred melts away and I’m just left with my appearance. It’s not that bad. ♦