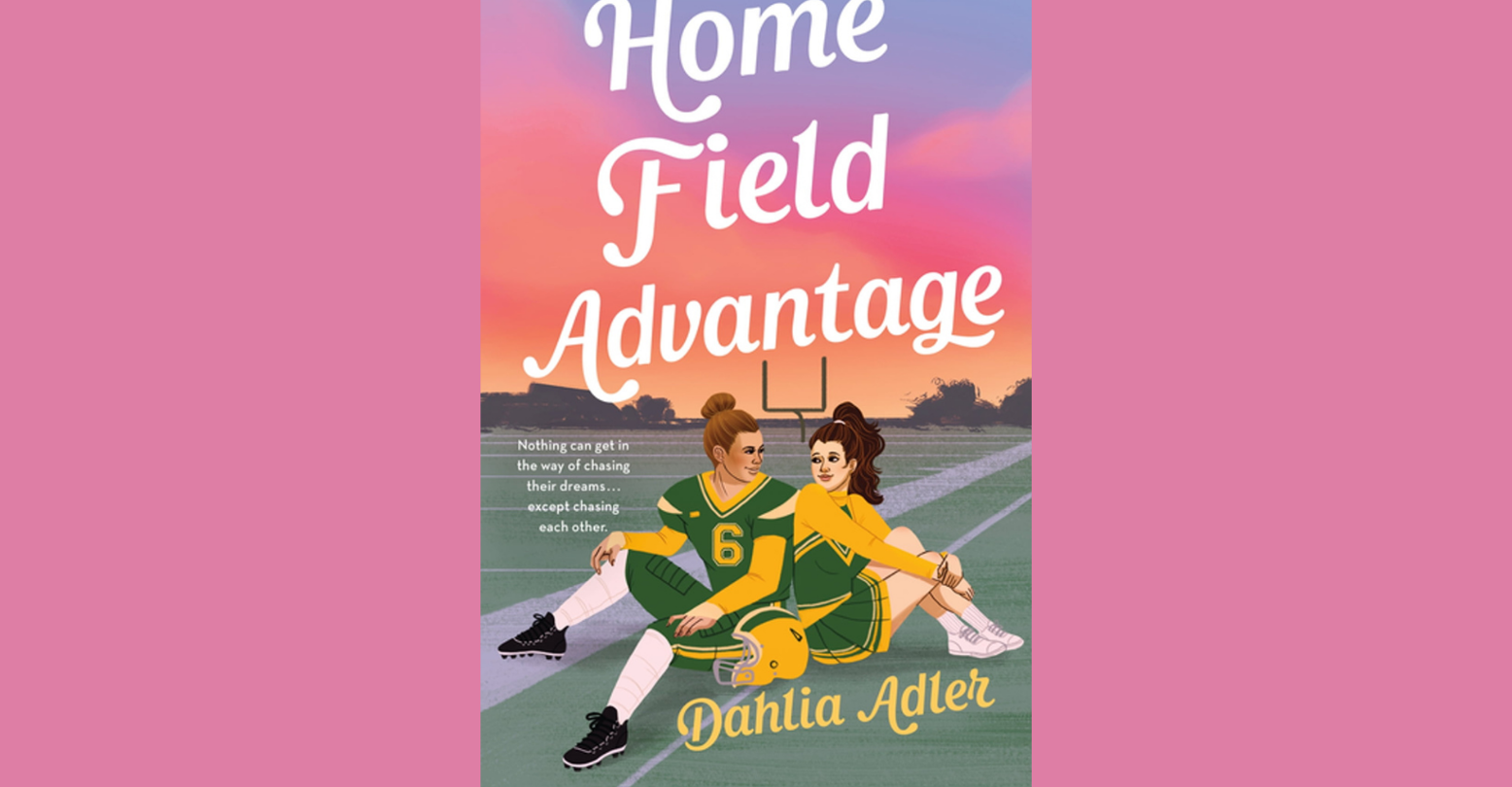 It’s a high school romance classic: a tryst between the star quarterback and the standout cheerleader. But in “Home Field Advantage”, Dahlia Adler’s latest YA romance, this genre standard gets more than a queer twist — it puts a whole new meaning to the phrase playing to win.

Amber McCloud’s dream is to captain her high school cheer squad: her only hope for a scholarship to get her out of her conservative Florida town. Her plans to secure the spot by supporting her crew through their first season since their star quarterback Robbie died in a car accident get derailed when replacement quarterback Jack Walsh turns out to be Jaclyn Walsh, and all hell breaks loose. Sparks fly between them, but with both the football team and the cheer squad turning Jack into Public Enemy #1, Amber has to make some hard choices about who she wants to be — not just for her teammates, but for herself.

Early praise for “Home Field Advantage” called it “cinematic,” and that couldn’t be truer. Jack and Amber’s chemistry leaps off the page from the moment they first connect, a meet-ugly that turns the “love at first sight” trope on its head when Jack’s protective defensiveness (understandable, given the cold shoulder she receives on her first day with her team) makes her throw up her walls at Amber’s first attempt at an olive branch — not that Amber tolerates it for a second.

“Not having a dick doesn’t mean you have to be one, FYI,” she tells Jack when they meet. “Rah-rah and a sunny fucking day to you, too.”

That first meeting gives way to a magnetic attraction and a swoony romance, complicated by Amber’s fake public romance with Jack’s teammate and the school’s refusal to accept Jack in her new role, no matter how many games she wins for them. Adler gets story beats in a way that keeps the pages turning, building tension and laying down hints that give way to a powerhouse third act.

Early praise for Home Field Advantage called it “cinematic,” and that couldn’t be truer.

On its own, Home Field Advantage is a sparkling, heartfelt queer take on the high school football romance, but its timing adds an extra layer of impact to the story.

Home Field Advantage will hit shelves as a queer sports romance set in a small Florida town just a few months after Florida governor Ron DeSantis signed the now-infamous “Don’t Say Gay” bill into state law. It’s also been a hellish year for trans athletes, with a record number of anti-trans laws drawing sharp lines around sex and gender in school sports in multiple states. In a year like this, a high school romance about conquering a culture of silence and closeting that also features a female quarterback breaking all her historically-male team’s records hits like a balm to the soul.

Reading Home Field Advantage isn’t just a fun game of “Republicans would hate this” bingo (though you’d win if you played). It offers a callback to queer classics like But I’m a Cheerleader while bringing the challenges faced by today’s queer teens front-and-center, from digital bullying to the frantic need to establish a “uniqueness” in order to make a college application stand out. But this year especially, the secrecy and silencing — specifically self-silencing — that run through the novel give it an extra layer of meaning and importance.

Both Amber and Jack come into the story aware of their own queer identities, both out to their (supportive!) families and a few close friends. But neither of them are out to the rest of the Atherton community. Amber leans into the power of a public fake romance with her friend (Jack’s teammate) Miguel — an arrangement that benefits them both, keeping Miguel’s sexuality as far off the Atherton radar as her own.

Reading Home Field Advantage isn’t just a fun game of “Republicans would hate this” bingo—it offers a callback to queer classics like But I’m a Cheerleader while bringing the challenges faced by today’s queer teens front-and-center.

Jack takes more of a glass closet approach: she knows people will make assumptions, but she’s also frankly aware that heteronormativity is a hell of a drug. “You’d be amazed by how much people can ignore if they want to,” she tells Amber. “There are literally people who assume I’m in this just to see guys naked in the locker room, because they can’t imagine a girl could have zero interest in boys.”

But in a moment of social awareness that’s more than a little heartbreaking, she makes it clear to Amber that whatever people assume, things are hard enough at Atherton without giving people more ammunition to use against her. “There’s a difference between being visibly and quietly queer and putting it all out there,” she says.

In an increasing number of states, putting it all out there is riskier than ever for queer teens. Despite lawmakers early insistence that “Don’t Say Gay” bills wouldn’t apply to students’ own abilities to talk about their experiences, students like Zander Moricz, the youngest plaintiff in the first major lawsuit against Florida’s bill, are being threatened with censorshsip and public consequences for talking openly about the law. But they’re fighting back, too. Florida students like Will Larkins have done everything from flouting the rules by giving class presentations about Stonewall to taking to the pages of the New York Times to call legislators out on the flagrant attack on queer youth.

Home Field Advantage was well on its way through the publication process when Florida’s bill hit DeSantis’ desk. But even though the anxiety that follows Amber through the pages is social, not legal, it’s still pervasive. In safe spaces like her home, she’s able to talk openly about her queerness, even if she’s still working her way toward choosing a label that feels right to her (in a startlingly refreshing scene, she tells Jack about the different labels she’s tried on, crediting “the wisdom of the Internet” for the information that’s helped her explore) — but in school, around town, and even with her best friend Cara, she lets the assumptions people make about pretty, feminine cheerleaders enforce her personal closet walls.

Amber’s cheerleading isn’t just central to the plot and her own story arc, it also plays a sweet homage to another queer classic: But I’m a Cheerleader, the movie Autostraddle called the best lesbian film of all time (they’re right, and they should say it). But I’m a Cheerleader is a darker comedy than Home Field Advantage, with its protagonist literally being sent to an over-the-top conversion camp, but the ways in which femininity is simultaneously weaponized and used as a protective mantle shows up in Adler’s book as well. Both texts also call out the ways that cheerleading — despite being one of the most dangerous sports out there — is often dismissed as silly or frivolous. It’s also not an accident that, in both How to Be a Cheerleader and Home Field Advantage, that attitude comes not just from social messaging but from other female characters.

But Amber is clear: she doesn’t do cheer because people make assumptions about cheerleaders being Nice Straight Girls. She does it because it’s hers.

“I love cheerleading,” she tells Jack, with no room for argument. “I get to be athletic and make people happy and have fun with my friends and show off amazing skills, and I’m good at it. Cheerleading was my choice. It will always be my choice.”

Amber’s choices — about herself, her relationships, and who she wants to be — shape every beat of Home Field Advantage, as she struggles to reconcile her goals for her future with her values, her identity, and her feelings for Jack. It’s a character arc that hits differently in 2022, as efforts to erase queer youth identities not just from bookshelves but, in some ways, from public view altogether. Attempts to ban queer books from school and public libraries have increased exponentially this year, and while neither authors nor teens themselves plan on letting them go quietly, the messaging is clear: the people making those laws don’t want happy queer stories because they don’t want happy queer kids.

In a year like this, a high school romance about conquering a culture of silence and closeting that also features a female quarterback breaking all her historically-male team’s records hits like a balm to the soul.

But that just makes us root for stories like Amber and Jack’s even harder. “Writing queer stories for children and teens…is about about showing them that they’re good, wonderful natural, just the way they are,” said writer Karis Rogerson in a recent article about the ways that queer authors have responded to book bans this year. “Queer lit can be lifesaving. What’s on the line is nothing less than the livelihood of queer teens. And you know what? They matter. They matter so much.”

Through plays on long-loved romance tropes, delightfully complex characters, and the tender-handed approach to teen drama that’s made Adler such a powerhouse in the queer YA world, Home Field Advantage is exactly the kind of representation and hope that every queer kid — out or not — deserves. It’s a reminder that even in a world that wants you silenced, you deserve to be as loud (and proud) as you want.

It’s a reminder that people out there are cheering for you, no matter what.♦