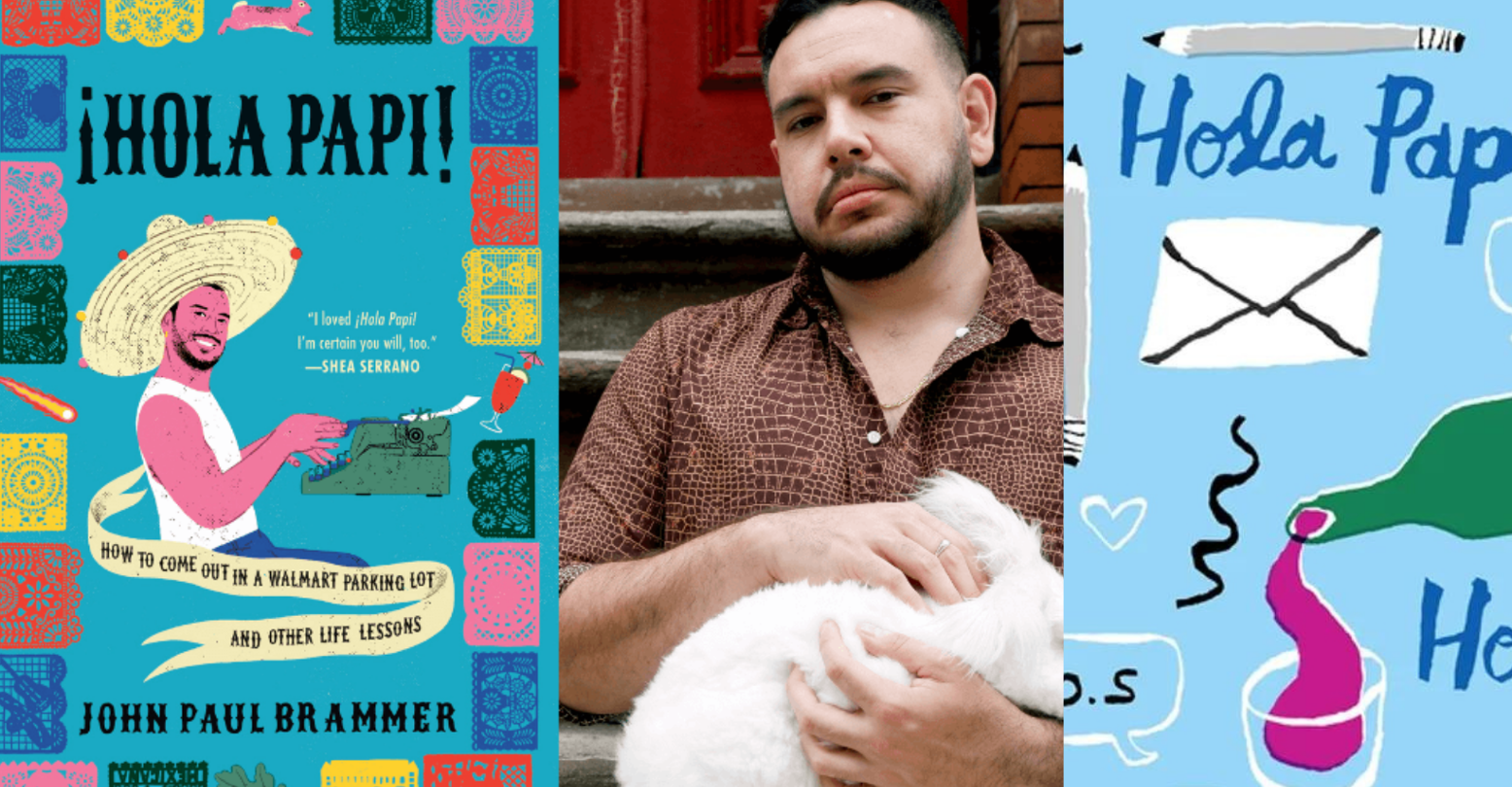 “A Queer Latino ‘Dear Abby’ huffing poppers.” That’s how JP Brammer pitched Hola Papi, his popular advice column originally published on this website. At the time Brammer had never written advice, nor did he feel qualified to do so, but he was a busy freelancer who knew having readers provide a weekly topic guaranteed an endless supply of material. And a weekly column meant weekly pay.

“I had everything to gain,” Brammer admits in his new memoir Hola Papi: How To Come Out In A Walmart Parking Lot and Other Life Stories. First published in 2017, Grindr (Into’s former owner) broadcast Hola Papi through the app, where it became an overnight success with millions of users. From the start, Brammer’s confessional impulse was at home in the column as readers’ questions triggered his memory. As he mined personal experiences for common themes, he learned to give advice in earnest. To his readers, and to himself. In the book, Brammer threads his rural past to his urban present in graceful retellings of coming out, traumatic bullying, first loves and eventual self-discovery, revealing a life-long tendency to authorize stories he’s told himself in order to survive.

In early May, I caught up with Brammer to discuss his new book and to wish Hola Papi a happy homecoming.

When you began Hola Papi, did you have high hopes? I think most writers, whenever they start a new intellectual property, especially if we don’t have a whole lot of money, all harbor some hope that this can be our thing that lasts so we can ride it wherever we need to go. There was that flicker of hope when I started Hola Papi, but at the same time, the media landscape did a really good job of managing those expectations and beating them down a little bit. It’s hard to make money in the media. It’s really hard to make it your living. I’m really happy that Hola Papi ended up being my segue into what I’m doing now.

How does one become an advice columnist?

In the book, I talk about how I never really set out to become an advice columnist. It was a happy accident. I was always looking for a convenient medium to do the kind of writing I like to do, which tends to be pretty personal, and tends to be evocative and emotional. With the column, my thinking was, I’m broke. I need to maximize the number of columns I’m going to write for this website, how do I do that? I really didn’t trust myself to write about something new every single week. That’s where the advice column stepped in. To make up for my lack of expertise in that field, I asked myself, What if I make this a parody advice column? The joke is I am a gay Mexican guy pretending to be Dear Abby. For people that aren’t in big cities and don’t have a lot of connections to a wider gay community outside of their immediate circle, the column, because it was getting pushed through Grindr, ended up reaching people who I think we’re really looking for a sense of community, and who were really looking for a mentor figure who had a lot of questions to ask. Hola Papi got there first. That’s what the book is about, getting there first and having the responsibility to take it more seriously.

To an extent, Papi is a character. It’s a cartoon with a really confident, funny voice that I put on more than I actually have.

When did writing advice become an activity in working with your memory?

Almost immediately. The very first column was about this guy who was worried that he was fetishizing Latino men by only dating Latino men. As a Latino who’s experienced that firsthand, I thought it would be a great opportunity to pull from my book of experiences to talk about what that was like and what knowledge could be gleaned from it. This was always [the column’s] DNA, which made it really handy when it came time to write this book, because it wasn’t such a radical departure from how I’ve been running Hola Papi all along. To an extent, Papi is a character. It’s a cartoon with a really confident, funny voice that I put on more than I actually have, but Papi relies heavily on my life experiences. I tend to tell anecdotes and use my own life events to make the column happen.

If there’s one thing this book has launched in me, it is an interrogation into what my goals are with writing in the larger context

Is this why you gave JP in the memoirs a character arc?

I wanted to avoid making the book a list of things that have happened to me, or about the worst things that have happened in my life. I don’t think that is the goal of my memoir. I wanted the book to make a point. I wanted a narrative. I wanted an arc because — and the book itself talks about this— we are story-driven creatures. We arrange our lives into a narrative and make commentary on that. I wanted to talk about the events in my life that I have used as my blueprint for how I understand myself and my life. In the book, I talk about the bullying and abuse I went through in the eighth grade and how I left middle school to start living a different life. That, to me, is a story about how the stories we tell ourselves about our lives can end up impacting the way we live every single day. I’m trying to show you probably have memories that act the same way mine do, and here’s how we can recognize our role as an author a little bit more, and look at things a little differently to help us.

What has giving advice taught you about yourself?

If there’s one thing this book has launched in me, it is an interrogation into what my goals are with writing in the larger context. I have been sitting myself down and writing every single day since I was 20. It’s this deeply ingrained fabric of my everyday existence. In that process, I stopped thinking about who I was going to reach; What are people going to feel when they read it? The end goal was always a book because I saw that as the ultimate expression of the written form. Now that it’s coming out and people are actually reading it, it’s hard for me to think about. On the one hand, I obviously want a whole bunch of people to read my book. That would be great. I think I have stuff to say. I think I say it in a fun, interesting way.  I also want it to be a good book. I want it to express something that I found it difficult to express. I want it to hit on things that I think are important, that illuminates things in ways readers didn’t expect. ♦