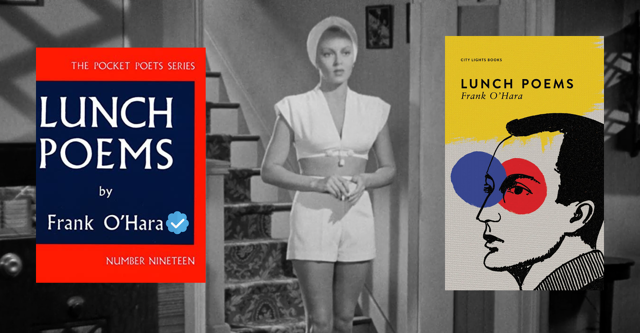 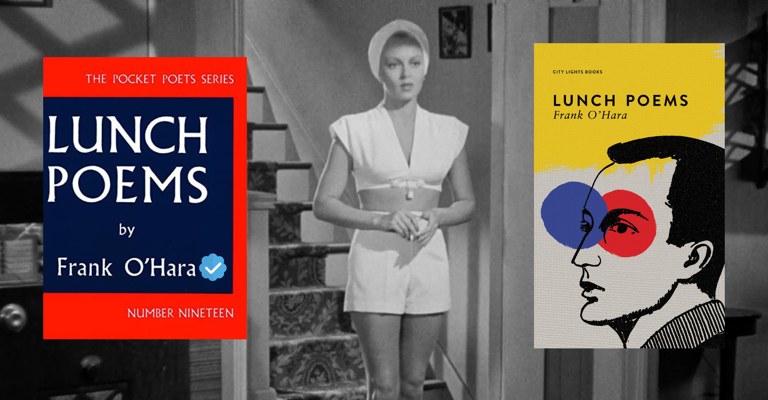 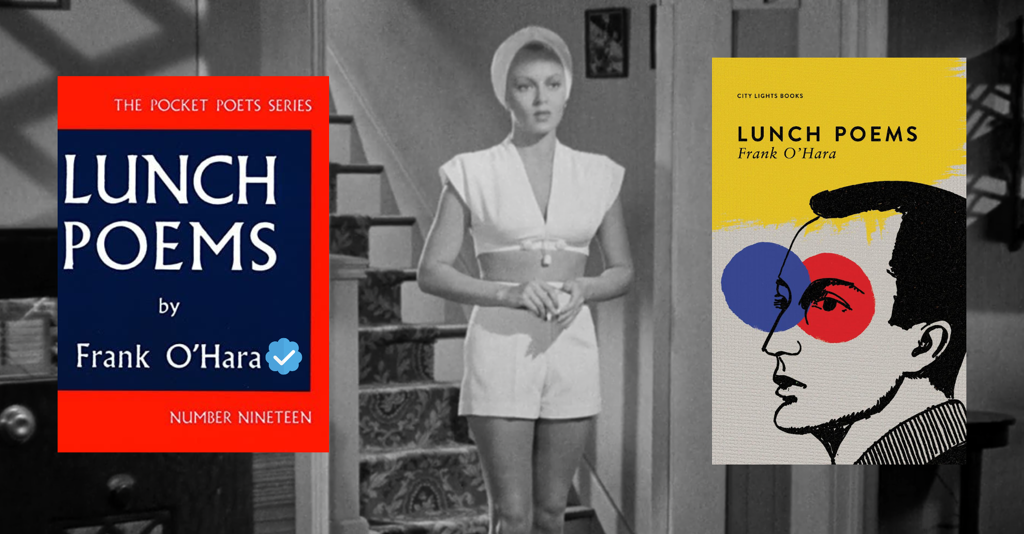 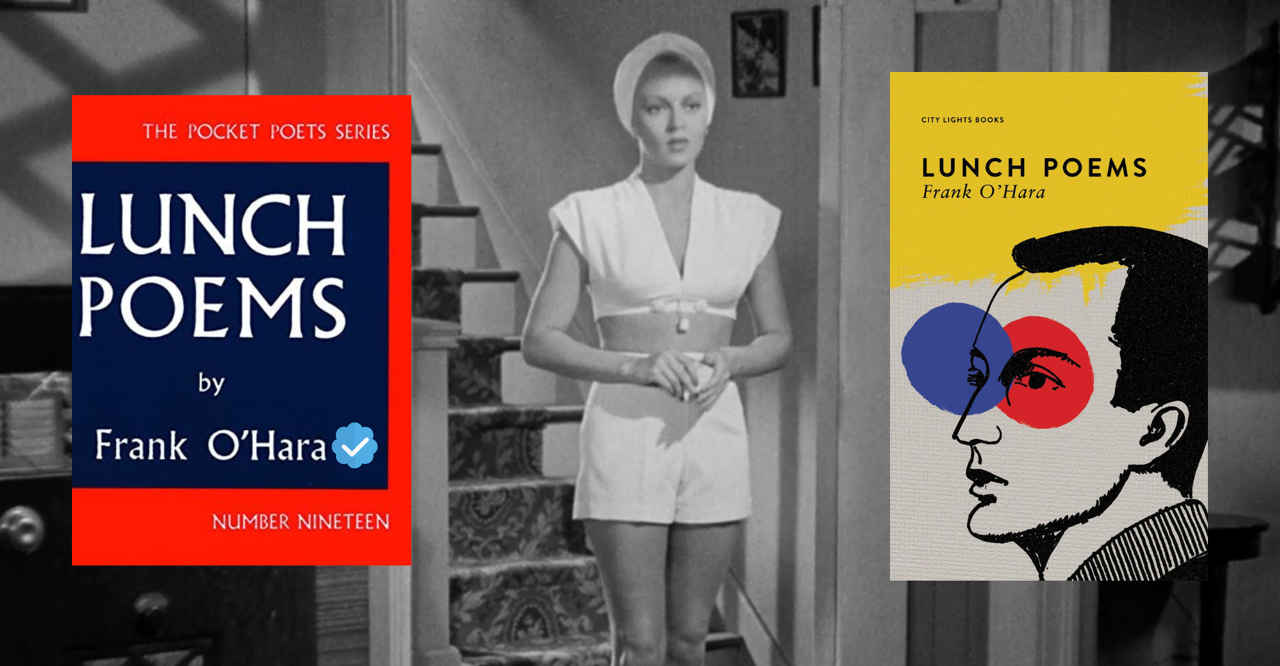 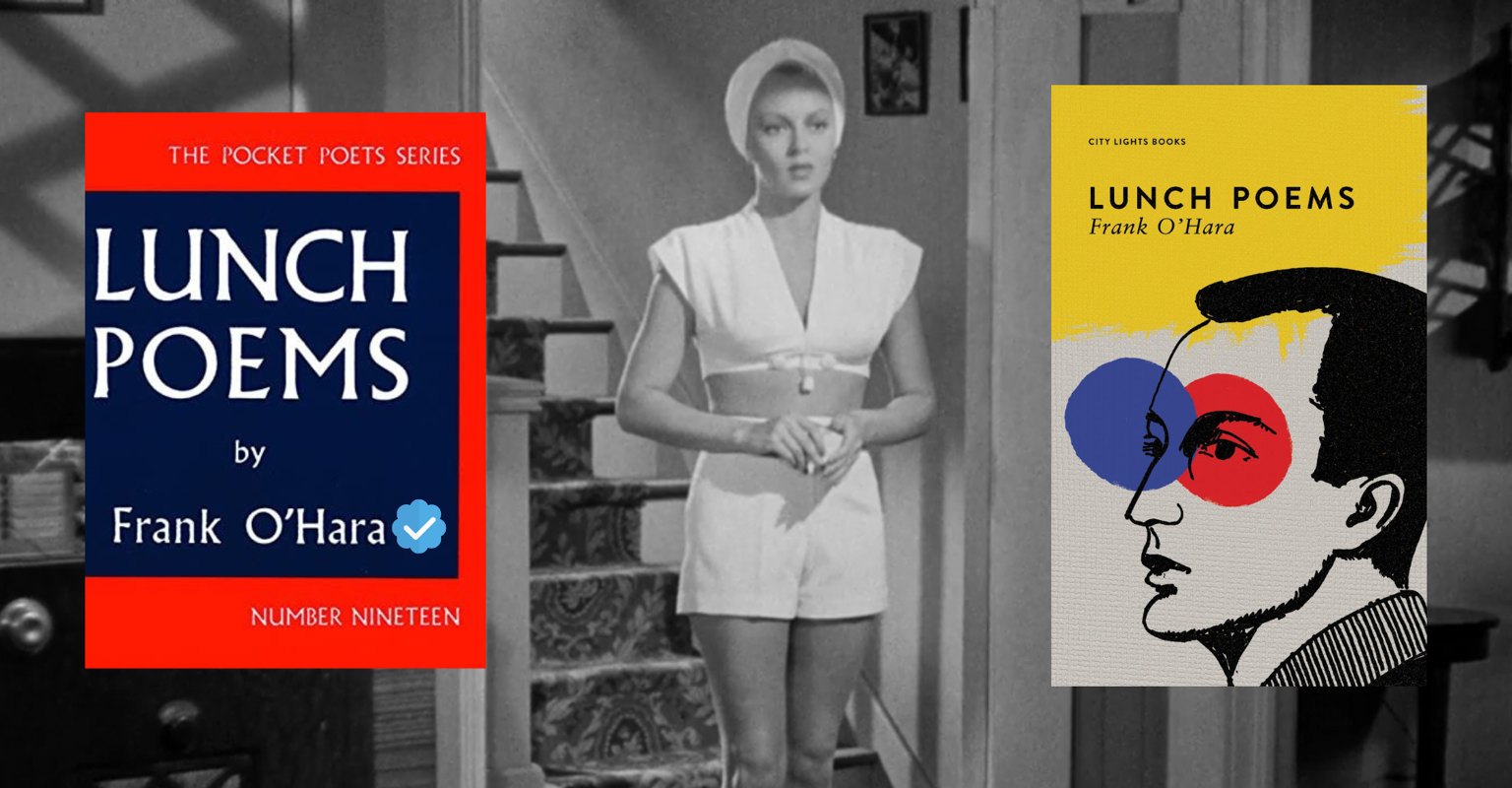 Life is to be lived by the moment, by the sweetness of serendipity: i.e., by the tweet. Once sent, a tweet becomes an indicator of a moment in time; a moment that, for whatever reason, was deemed worthy of being publicly commented upon. Like a bug in amber, tweets are thoughts frozen in time and made to be observed.

No one knew how to cherish the small and seemingly insignificant facets of continuous living better than the famously Twitterless poet Frank O’Hara. For all his mindful musings, it could be said that O’Hara’s signature poetic style set the furious pace at which Twitter operates today. More specifically, the works of his collection Lunch Poems (1964) were written like tweets, zeroing in on the oddly specific details of a general experience.

Infused with the sights and sounds of New York City, Lunch Poems is the product of O’Hara’s daily lunch break. Just like he says in “A Step Away From Them” :

O’Hara, who worked as a MoMA curator while he wrote “Lunch Poems,” began his lunch break each afternoon by strolling through Times Square. Written in literal motion, the flow of each poem takes on the instinctive rhythm of walking, of stopping and going, and having your other senses triggered into alertness without warning – as if the reader is right beside O’Hara, meeting him step for step in real time.

To capture the heat of the moment and transcribe it into tender recognition as Frank O’Hara did is a feat also achieved through a viral tweet. O’Hara and Twitter users alike use pop culture references, melodramatic declarations, and real-time accounts as the means by which they make sense of a humanity that is both shared and personally percieved.

Crafted on a whim while O’Hara rode The Staten Island Ferry, “Poem [Lana Turner Has Collapsed]” presents the most prolific example of how Lunch Poems set a precedent for Twitter’s casual form and effortless function. Showcasing  the human eye’s vigilance for movement, O’Hara begins the piece with a succession of:

I was in such a hurry / to meet you but the traffic / was acting exactly like the sky / and suddenly I see a headline / LANA TURNER HAS COLLAPSED!

O’Hara sees the tabloid in real time; immediately thereafter, his words, reading without punctuation like an inner monologue, are abruptly halted by way of a lonely exclamation mark. Frank O’Hara responds to the drama of the tabloid in kind with a flair all his own:

I have been to lots of parties / and acted perfectly disgraceful / but I never actually collapsed / oh Lana Turner we love you get up.

As an ode to the classic Hollywood cinema legend Lana Turner, O’Hara’s tongue-in-cheek playfulness conveys admiration and admonishment in equal parts; the expertly balanced satire which serves as the blueprint behind stan Twitter.

With a cry of “oh Lana Turner we love you get up” O’Hara happily concludes his poem in conflict. Even as he dismisses Turner, the tenderness of  “we love you” remains true and deeply felt. It is only because Frank O’Hara adores the Hollywood starlet that he can so easily trivialize the tumult of her life in the public eye.

Where a fan sympathizes, stans satirize. O’Hara himself exacerbates the gossip by referring to his own perfectly disgraceful actions. At the same time, he also makes light of the situation, cheekily stating that he’s never collapsed; a claim justified by a deliberately irrational comparison between his experiences as a poet, and those of Turner, a screen legend and pop culture icon of classic Hollywood glamor.

While O’Hara may never be as widely recognized as Lana Turner the blonde bombshell, his keen eye for spotting and articulating the beauty of mundanity lives on every day in the poetic process of tweeting. In the midst of another lunch poem – this one titled “Personal Poem,” O’Hara writes,