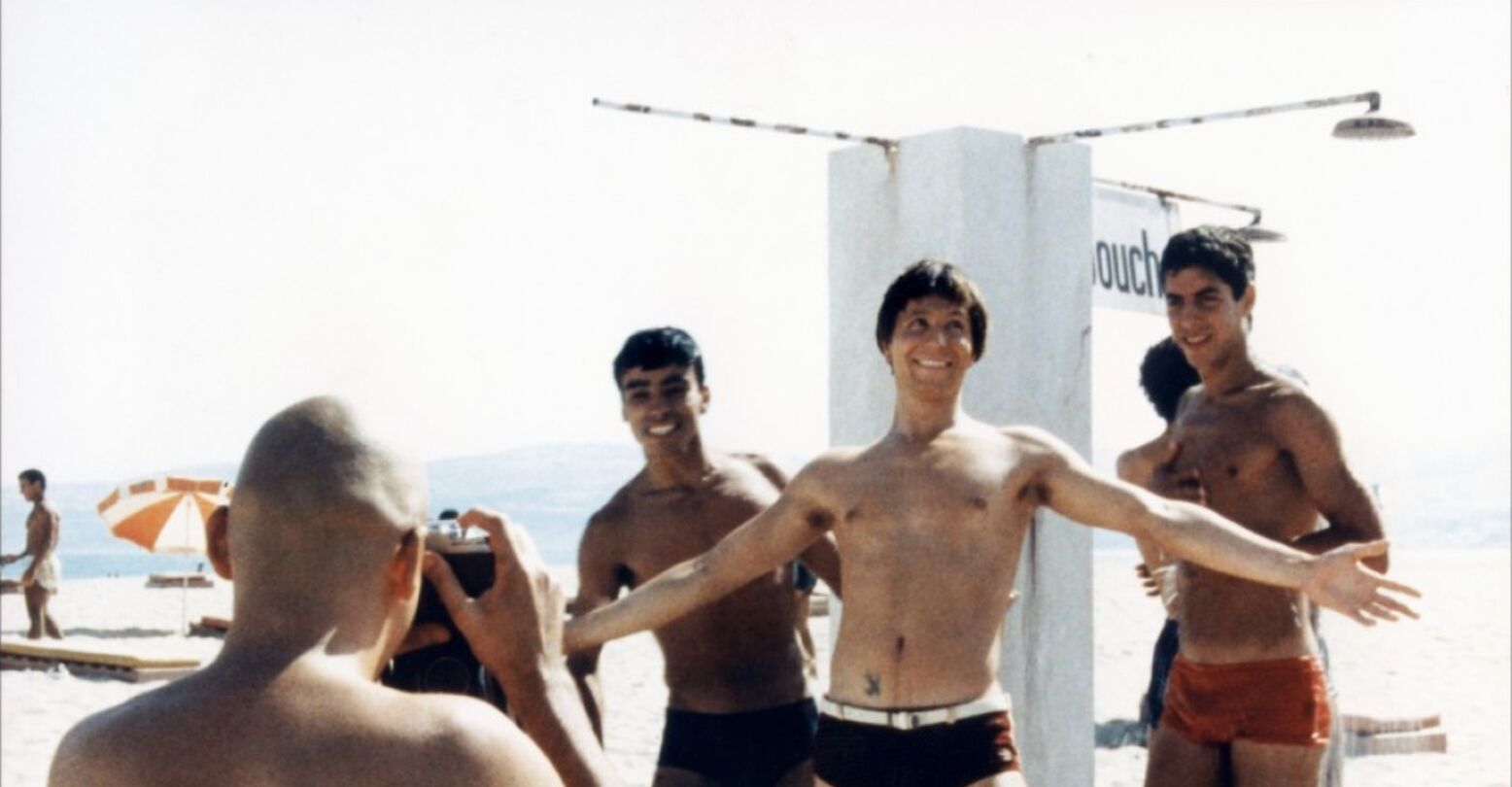 The story of Joe Orton and Kenneth Halliwell is one of my favorite fairy tales. Not in the modern sense of romance and happy endings: fairy tale as in cautionary tale. As in Brothers’ Grimm, as in Hans Christian Andersen. As in talking horse heads, dead parents, and missing limbs. Orton and Halliwell’s romance is a tale of the macabre, and I have been drawn to it for years, and almost every attempt to write about it sends me into a fugue state.

Yet I persist. Why? Because I hate myself. I am drawn to the edge and I can’t stop myself. There’s something about this story that I have to figure out, even if it kills me. And if you, too, love tales of tragic homosexuals, maybe you’ll understand what I mean.

There are so many things about Orton that are fascinating, almost addictively so. He’s the opposite of every other gay artist you’ve read about from the same time period. Far from being terrified of his queerness being “found out” as a young man, he openly flaunted his gayness during a time when the anti-sodomy laws that sent Oscar Wilde to jail in 1895 were still firmly in place. Orton loved public, anonymous sex and wrote about it freely. Many of his characters are gay or bisexual, and when asked about his sexuality by just about anyone—including the press—he was honest about his orientation. Taken all in all, Orton is a very modern type of gay man. In his diaries, he’s open about enjoying a variety of partners, disdains traditional ideas about partnership, and spits on the religious frameworks surrounding monogamy. One exchange between himself and his boyfriend-cum-murderer Kenneth Halliwell in his diaries has Kenneth saying that “a person should live only for another person or for God.”

He and Halliwell did, in fact, go to prison for six months, though it was technically due to defiling library books. He was the kind of person who never wanted to make a bid for respectability because he saw through it all so clearly. He seemed to understand the notion of systemic failure: that it’s not just being in a country that criminalizes certain sexual acts that’s the problem, but that the entire notion of respectability itself must be thrown out if any of us are to experience true freedom.

But Orton is many things, and that’s part of what makes him so confounding and so fascinating to me: he was my favorite thing of all, a gay bully. He laughed at prudes and straight people and queen and country. But he was also a victim: of homophobia, of domestic violence, and finally, of murder. Which is why telling his story is so hard. If one is to truly celebrate Orton, he can’t be turned into a pure victim. And yet that is what he was, in many ways. The hard thing about wanting to take control of your life and image—especially in the late 1960s—is that what happens to you, and who gets to tell your story, is still going to remain out of your control.

This is all a part of why Stephen Frears’ Prick Up Your Ears, an Orton biopic, gave me a panic attack halfway through. It’s a scary movie: not in the sense of ghosts or jumpscares or even obvious violence. It’s a cautionary tale with no moral, which is the scariest kind of all. Just as there’s no protecting yourself from Orton’s plays—which have also given me panic attacks in the past—there’s no protecting yourself from Orton’s life.

In Prick Up Your Ears, faithfully modeled on John Lahr’s brilliant biography of the same name, we’re treated to a surprising mix of tone that itself feels subversive. The film is freewheeling, at times hilarious, self-referential and deliberately Ortonesque. The pacing is insane: some developments happen far too slowly, while others happen in the blink of an eye. Most of the scenes are slice-of-life style, totally unconnected to the rest of the story. And yet, viewed as a whole, it gets it right: Orton’s life was a hilarious freewheeling adventure, until his sudden death, at which point it flipped over into being a textbook tragedy.

Some are terrified by the randomness of a crime: that’s the mystery that won’t let go. Others are frightened by stories of broken trust or deception: John List murdering his entire family and making a sandwich afterward, or Lizzie Borden giving her parents “40 whacks” for no apparent reason. On the surface, the scariest thing about the Orton story is the abuse entailed. When Orton and Halliwell met at RADA in the 50s, Halliwell was an aging, balding actor with some years on Orton. He took in the young man in and mentored him, and the two developed a romantic relationship. In Halliwell’s view, it was he that “taught” Orton how to read and write critically. Yet Halliwell always felt he should have been the artist. So when, after 10 co-dependent years and a prison stint together, Orton suddenly found himself a runaway success in the London theater scene, Halliwell fell into bitter resentment and let his mental health worsen.

But it’s not as simple as saying that Orton was a monster and Halliwell was a victim, and it’s not as simple as success made it too difficult for them to stay together, and it’s definitely not as simple as “Orton wanted to leave Halliwell and Halliwell knew it, and that’s why he killed him.” The film understands this, to its credit. The murder-suicide was due to a cocktail of mental illness, codependency, and the general temperature of the time toward queer people and specifically queer art, especially art that questioned the dominant narrative. Both Halliwell and Orton were doomed not because they were gay, or because the culture was intolerant, but because they were almost too able to digest the kitchen-sink drama imperatives of the culture that made them. They never moved out of their one-room Islington flat covered in Halliwell’s collage art, not even after Orton started making real money. Not even after the Beatles enlisted Orton to write them a new movie script for “Up Against It,” a movie that would for once acknowledge and play with the foursomes’ inherent homoeroticism (they were sick of “the old Richard Lester shit”, according to Orton.)

Orton and Halliwell were stuck in so many ways, and stuck together, in a mutual state of stuckness. Imagination died for them, in a sense. The last imaginative act Halliwell could perform involved braining Orton to death in his bed and subsequently overdosing.

Watching the Frears movie, you can maybe start to understand why anyone would be obsessed with these two. It’s one of those movies with so many brilliant turns and idiotic simplifications that you spend the whole time wondering whether or not it’s actually good. But good is beside the point: it’s illuminating. Gary Oldman’s take on Orton is oddly similar to his take on Sid Vicious one year earlier in Sid and Nancy, another incredible domestic abuse movie. Oldman is insouciant, playful, darkly comic: it’s the swagger of his young, pert-assed body that really seems to understand Orton more than the lines or the performance itself. And Alfred Molina as Halliwell is every bit the verbose, depressed, “bitchy queen” that Orton’s diaries make him out to be. But of course, the only version of Halliwell we get is the version Orton gave to us. He called him a “bilious queen” or a stupid queen or any other number of shitty insults, often to his face. It was only a matter of time, you’d think. But abuse happens all the time without ending in murder. So what happened, really?

I guess it’s not worth trying to find out: this is the kind of exercise that breaks my brain and gives me panic attacks in the first place. I know that there’s no saving Orton, but somehow, every time I watch Prick Up Your Ears, I want things to go differently. I’m consistently shocked when they don’t. I’ve forced myself to read Orton’s plays and his diaries and to bury myself in his story, but there’s no real way to save him. He was awful, and also kind of wonderful, and also kind of sad, and I think there’s something about that combination that I’ll always love, no matter how bad for me it turns out to be. There’s a reason this is one of my favorite movies of all time: there’s a truth to it that isn’t easily arrived at, especially when you’re telling a story that’s often described as “stranger than fiction.”

On the contrary: it’s fiction that needs to account for every odd action or tie things up neatly by the end. In real life, everything is random. Nothing makes sense. No ending is happy or unhappy, but thinking makes it so. And it’s always left to us, the people who remain to make sense of insane moments in history, to try and explain why something happened the way it did. It’s a foolish exercise, but I guess we have to keep at it. At least, I do.