The story of the AIDS crisis and those who survived it has come a long way since Hollywood tackled this issue in the popular but ultimately ‘safe’ movie, Philadelphia. Last year, Robin Campillo’s 120 Beats Per Minute dove deep into the world of AIDS activism with far more authenticity, exploring what life was like for French protestors who fought for change out on the frontlines. Sometimes though, we need to look back and return to our roots in the most literal sense in order to see how far we’ve come and how far we still have to go.

In 1985, Malaysian-born director Yen Tan transports audiences to a Dallas suburb where a closeted gay man (Cory Michael Smith) tries to enjoy the holidays with his deeply religious family. Contending with both the small-town mindset of his father (Michael Chiklis) and the stubborn resentment of his younger brother (Aidan Langford), Adrian struggles to maintain his composure in what might possibly be the saddest Christmas movie ever made.

In the three years since Adrian last left New York City to visit his family, much has changed in his personal life and yet nothing has really changed in his nondescript hometown. As if that doesn’t sound melancholic enough, Tan also shot every scene in grainy black-and-white, heightening the claustrophobic atmosphere that each character perpetuates by striving to keep hold of their many secrets.

Much of the script relies on the empty spaces that exist between Adrian and his family, both physical and emotional. Because of this, the rare moments where characters do connect are even more heartfelt than you might expect, whether it’s Adrian and his younger brother bonding over their shared love of Madonna, or Eileen (Virginia Madsen) confessing that she voted Democrat in the last election.

While later scenes consciously tug at the heartstrings, it’s these quieter moments early on that help encapsulate the dynamics of this suburban bubble so effectively, helping 1985 veer away from potential melodrama into something far more poignant. 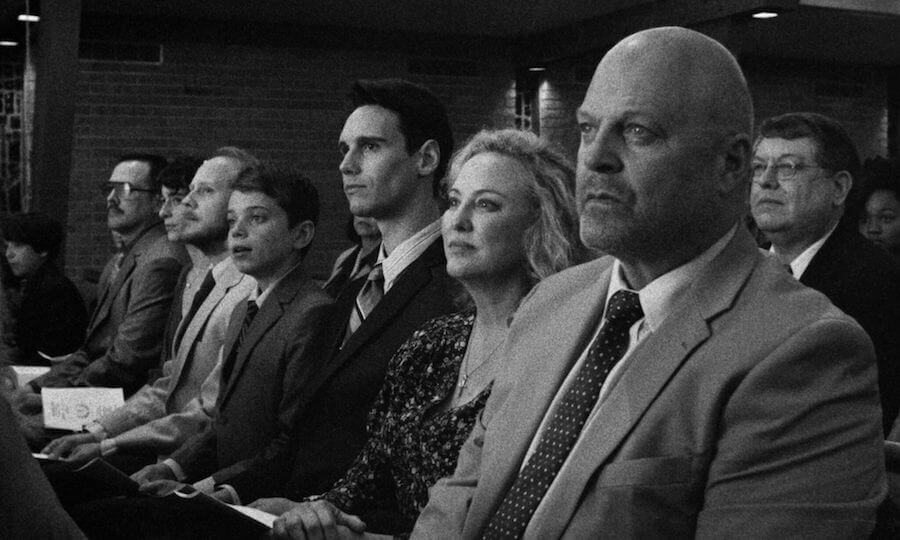 None of this would work though without someone relatable in the lead, and it’s here that 1985 impresses most, thanks to a quiet yet haunting performance from Cory Michael Smith. Best known for playing the Riddler on Gotham, the young star has also been making a name for himself in period dramas like Carol and First Man, yet it’s here that his star shines brightest.

For most of 1985, the script only hints at the suffering that Adrian endures inside, yet Smith still conveys this pain as something that threatens to break out from under the surface at any given moment. When heartbreak does inevitably arise, there’s still an impressive level of control on display which sadly reflects how Adrian himself can never fully open up to his parents in the ways that matter most.

Instead, the only people that Adrian can truly be authentic around are his younger brother Andrew and his ex girlfriend, Carly (Jamie Chung). Hints that Andrew might be gay too provide a glimpse of how Adrian must have also struggled while growing up in their family home, so it’s heartening to see them relate to one another while fending off concerns from a father who worries that they’re too “soft.”

It’s not until he meets up with Carly that we finally see the “real” Adrian, though, and learn what’s really going on behind his collected facade. While the focus is understandably on the protagonist at this point, Chung is still a vibrant addition to 1985, imbuing the usually thankless role of rejected girlfriend with agency and a poignancy of her own too.

Chung isn’t the only one whose character flips convention on their head either. Throughout 1985, Virginia Madsen displays a rare restraint as Adrian’s mother, and yet the love that Eileen feels for her son shines through regardless. In one particularly touching scene towards the end, she delivers a far briefer and yet arguably even more heart-wrenching monologue than seen in either Love, Simon or Call Me By Your Name: “You don’t have to tell me until you’re ready.”

In the role of the hard-working yet resentful father, Michael Chiklis embodies a figure that might be painfully familiar for queer audiences who grew up in a similar environment. Tan slowly builds the tension between them throughout until it simmers into something more confrontational during a backyard heart-to-heart. In a four minute long take that feels excruciatingly longer, Tan keeps the camera at a respectful distance before finally diving into a close up shot that verges on invasive.

It’s here we learn that Dale doesn’t really know how to handle what life has thrown at him, and in his own way, he still tries to do right by his sons, even though his father raised him to be aggressive and closed-minded: “I don’t know what to do.”

With these words, Dale echoes something that Adrian also said to himself while sobbing outside earlier against the backdrop of an empty skyline. Just like in real life, none of the characters depicted here really know what to do, and instead, they muddle through with what they’ve got, even if they don’t have much time left.

Unspoken secrets and hidden fears loom over every shot in 1985, embedded in even the most mundane of conversations. In the production notes, Tan acknowledges that AIDS movies might seem “passé in this day and age,” yet there are still plenty of LGBTQ people living today in 2018 that understand and actively resist such bigotry, fighting to dispel these secrets and fears from their own lives.

Just as the themes explored in 1985 echo modern concerns, the final scenes of the film transcend time too, taking us back to the beautiful moment where Adrian first met the love of his life in a gay nightclub. Although this is shot in very a different way from the infamous club scenes that 120 Beats Per Minute pulled off so well last year, the two films share a desire to authentically explore the AIDS crisis firsthand. By taking Adrian’s relationship with Leo full circle, director Yen Tan also takes the AIDS movie back to its origins, resulting in a stunning period piece that truly feels like a lost gem from 1985.

1985 is available to watch in limited release in cinemas now.