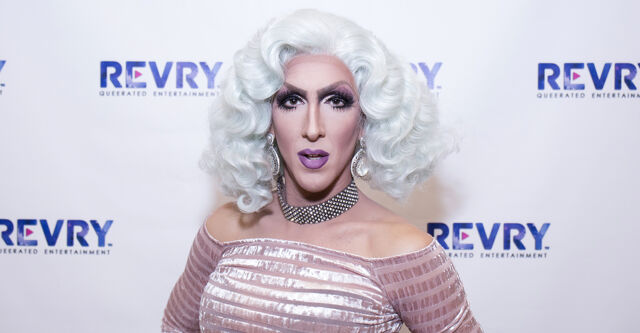 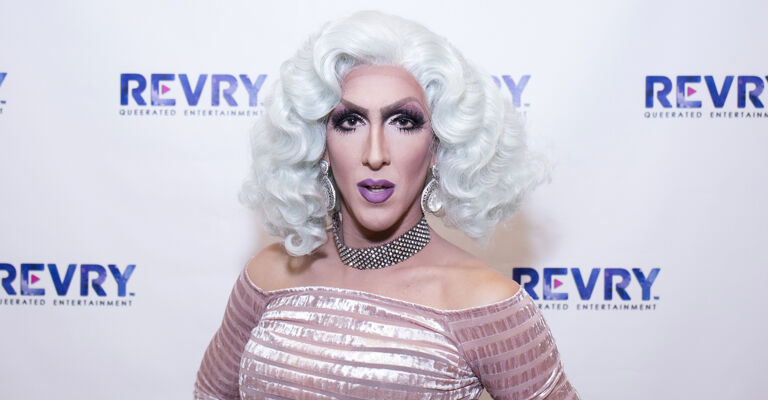 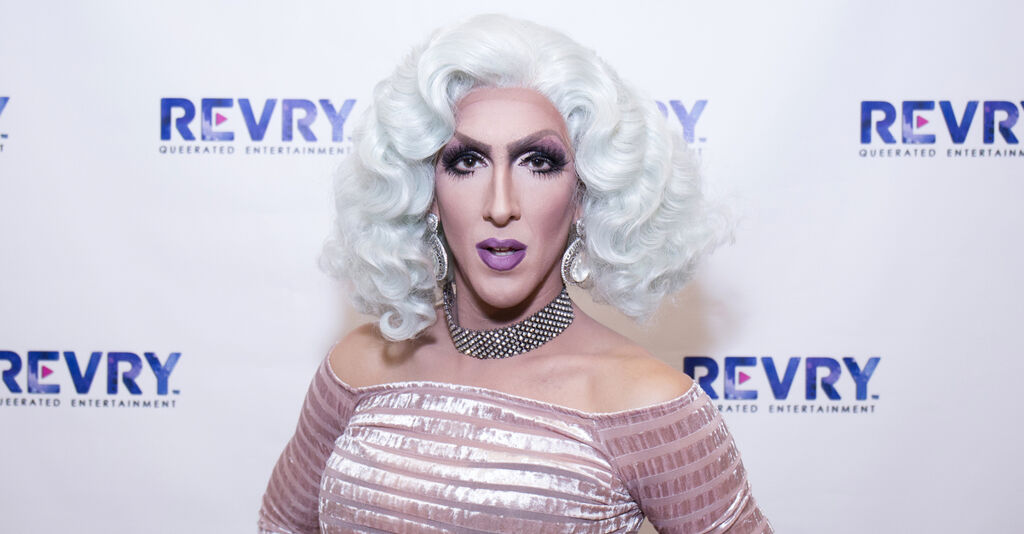 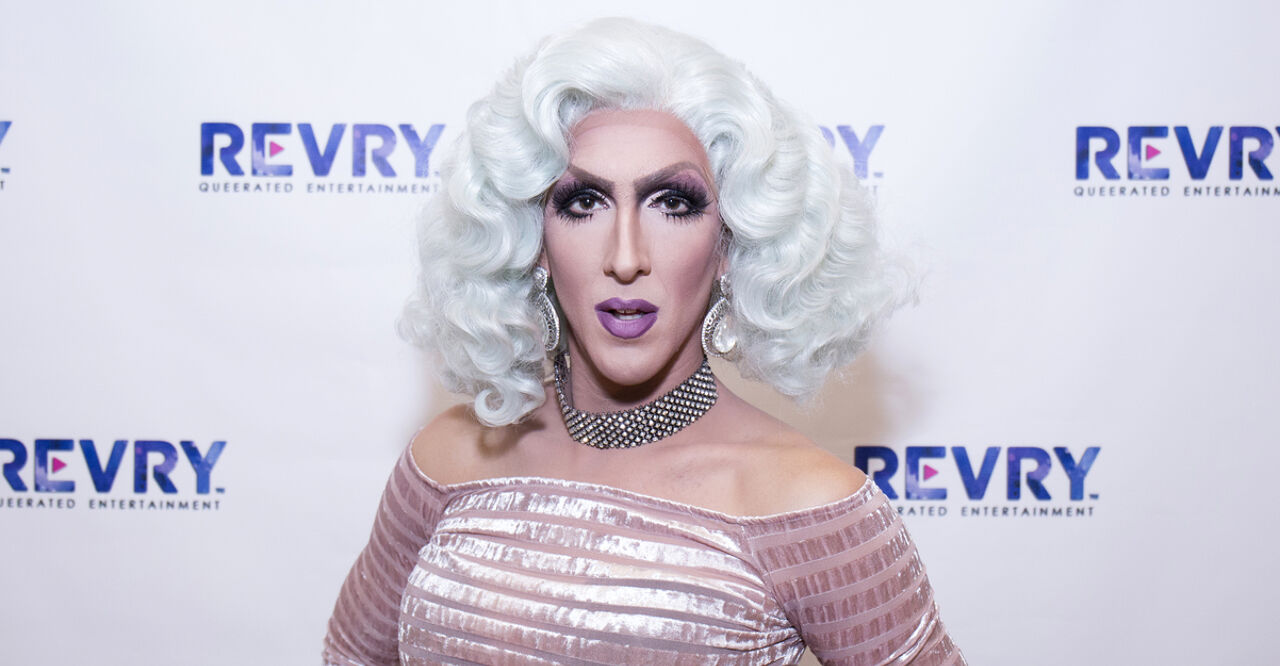 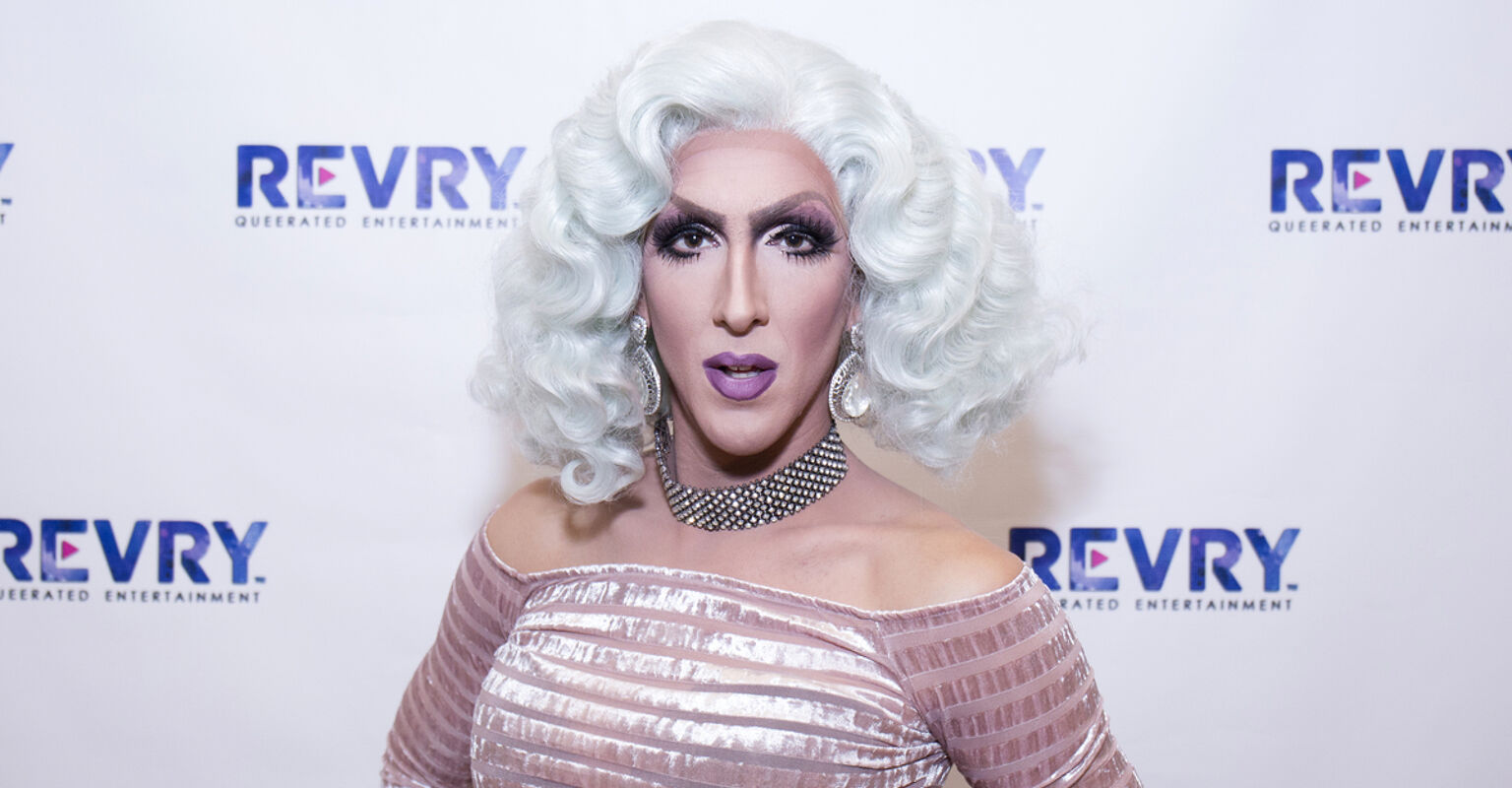 Intimate conversations have subjects talking about questions from their favorite drink to order and whether they prefer a night in or out to more in-depth questions like the ease or difficulty of making gay friends, discrimination and racism in dating, tackling stereotypes, and the people that inspire our subjects.

Get to know NYC-based drag queen Marti Gould Cummings. Marti has had a lengthy career performing in bars all over New York City who was recently featured in Fusion’s Shade: Queens of NYC and has become politically active in his community. Learn more about what he loves and his thoughts on various topics surrounding the LGBTQ community. 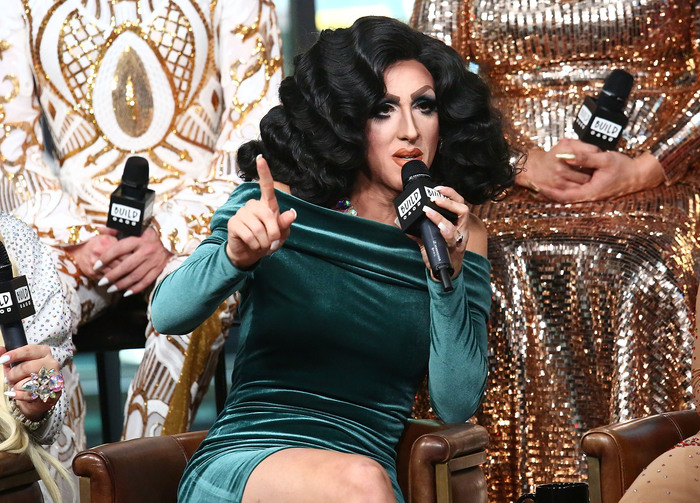 Age: 30
Preferred Pronouns: Out of Drag: He. In Drag: Doesn’t Matter
Sexually Identifies As: Gay Male

I love that it’s so diverse. I think the beauty of the LGBTQ community is there’s room for everyone. You can come from any socioeconomic background, religion, race, gender identity, and it’s all-encompassing because queer people are just people and make up different colors.

I think PrEP is amazing. I think the marketing done for it is great, and I think we now need to market PrEP to straight people as well because HIV is not just a gay issue. Some people try to label it as a gay issue but I think PrEP should be available to everyone. If there’s a drug that can prevent a disease, it should be distributed. Any extra preventative measure is great.

3. What are your thoughts on dating in the LGBTQ community?

I think dating is difficult in general. Connecting with another human being is so awkward and weird on the first and second date because you’re not sure of what you can and can’t say and what the rules are. I think dating is awkward for everybody, but it’s a necessary evil if you want to have a relationship. Dating is also fun, even if a relationship doesn’t work out, even if you date someone for three weeks, the experience is still fun because you’re putting yourself out there. Enjoy the date for what it is and move on.

4. What does Pride mean to you?

By today’s standards, with how our country’s going, Pride is a huge form of resistance. I think the Pride parade over the years has taken a celebratory turn which is great because we should celebrate the achievements we’ve made. But as our rights continue to be attacked, Pride has to be a protest again. Pride is knowing who I am, knowing my queer culture, and knowing that it’s a culture that was started by people who paved the way long before I was born, like Sylvia Rivera and Marsha P. Johnson. I think Pride is resistance now and I think we need to use our Pride march and parades to fight back and show a positive message. 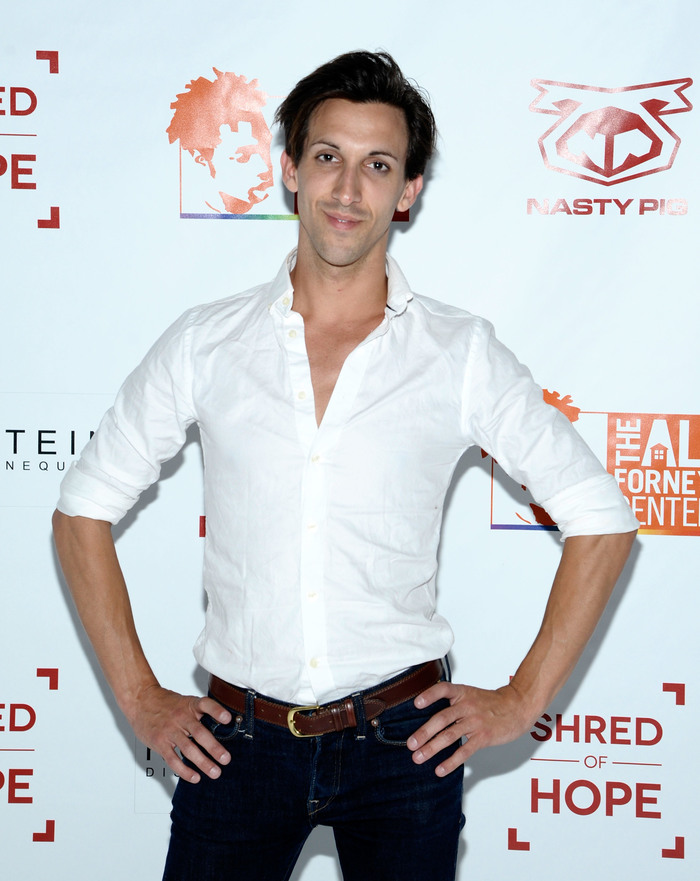 5. Who is someone you consider to be an LGBTQ icon?

Harvey Milk. I’ve become political lately and I love how Harvey, before queer people were political, he said, “If a bullet should enter my brain, let that bullet destroy every closet door in the country.” I think it was brave and courageous for a time when it was illegal to be gay and to run for office until he won, I think that’s a hero. He gave his life for the movement, I respect that and I think LGBTQ people who are heroes are the ones we don’t hear about every day. The people who are working for organizations to make sure queer kids are given housing and education. I think the heroes are the ones that are making sure that the homeless kids have somewhere to go at night.

6. What’s a song you consider to be an LGBTQ anthem?

I really gag for Patti LaBelle’s version of “Over the Rainbow.” I love Heather Small’s song “Proud” from Queer as Folk. I think it’s such a great song, I love it!

7. What advice do you have for LGBTQ youth?

Be nice to one another, get active politically, educate yourself, don’t bow down to racist, homophobic ideology that’s taking a wave in our country, and stay loud and strong. Know that the setbacks we’re facing may seem like big hurdles, but they are hurdles that have been overcome before and they can be overcome again.

I love somebody who is into life with their whole heart, mind, and spiritual well-being. My husband is such an amazing guy. I look for someone who is genuine. Genuinely owning your flaws and non flaws and knowing that who you are right now may not be who you are in five years and that’s okay. We evolve as people, and I think the evolution of someone is beautiful to watch in a partner.

10. Describe what the LGBTQ community is to someone who knows nothing about it.

The LGBTQ community is strong, unique, powerful, diverse, and a force to be reckoned with. We get shit done and are literally from every fabric of life, and I think it’s beautiful. We’re the outcast and I think the outcast are becoming more the mainstream which is okay, but I hope we keep the jagged edges to us. It’s no different than the heterosexual community, we just identify differently. 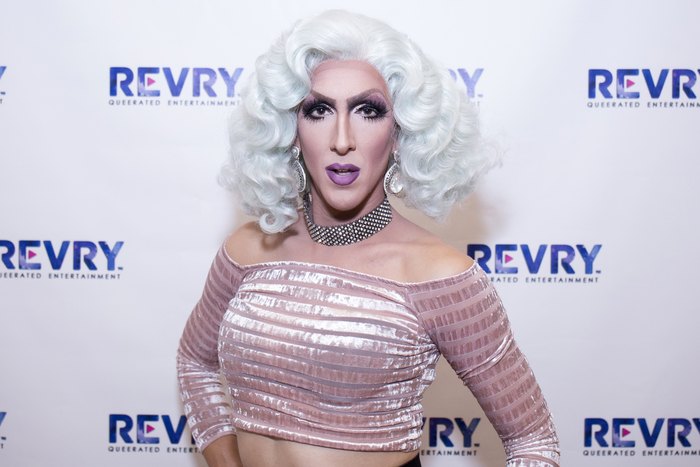 11. Do you think cis, hetero women should be in gay bars?

I think gay bars should be welcoming to all people. I obviously don’t care if a straight woman comes to my show, I’m happy to entertain anybody, that’s my job as a drag queen and people should be allowed to see shows, go to bars, and have a good time with their friends. My issue is if you’re a group of girls and you’re going to have a bachelorette or birthday party, what are your intentions of going to the bar? All people do this but sometimes, I notice girls acting a certain way in a gay bar whereas if I was in a sports bar or straight bar, I would be made fun of, kicked out, or harassed. You’re welcome in this space, but this space is a designated safe space for people who are outcast, who don’t feel safe going to a bar where you don’t feel safe. It’s a fine line, I think it’s about being respectful to the community and knowing the community.

12. What’s the first piece of media where you saw an LGBTQ person? How did it make you feel?

Will & Grace in eighth grade. I remember this guy, Chris came into school one day and said, “You’re just like Jack on Will & Grace!” And I felt found out, I was terrified, but I also loved seeing him on TV. I was terrified that someone my age saw Jack and recognized me in that.

Morning coffee in bed with my husband and our two dogs. 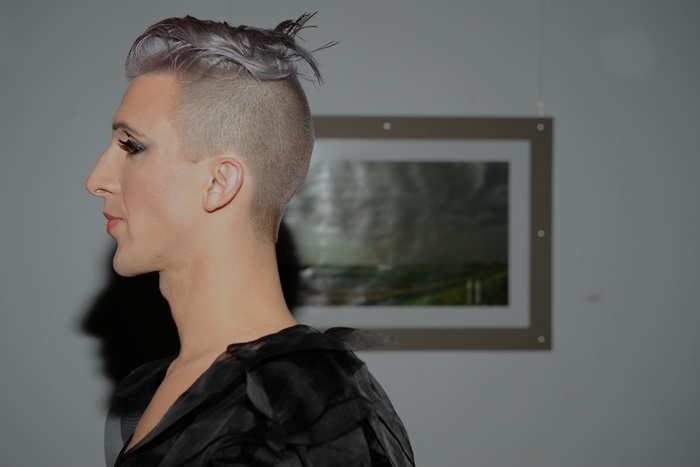 15. What’s your earliest memory that you felt you were different?

When I was in Kindergarten, there were boxes labeled “girls’ toys” and “boys’ toys,” and I always wanted to play house and kitchen. Growing up, my dad was the one who made me breakfast so I wanted to play in the kitchen because I wanted to be like my dad, but I also wanted to play with Barbies. And this girl, Bianca, complained to my teacher and said, “Only girls are supposed to play with these. That’s what the moms do.” And the teacher wouldn’t let me play in the kitchen. After school, I heard my mom yelling at my teacher saying, “How dare you make my child feel like this.” I knew I was different because I heard the teacher telling my mom I wasn’t allowed to put on the toy dresses and I realized that I don’t play like the other kids.

16. What is the title of the current chapter of your life?

Spaghetti on the Wall.

18. What are deal breakers for you when forming relationships?

I think the value I’ve gained is self-acceptance. Some days it’s easier than others. If I’m doing a show in Alabama, I don’t want to go outside because somebody’s going to make fun of me or call me a faggot on the street. But the acceptance of being like, “Okay, it’s not my business if someone calls me a name or says something about me because that’s their own insecurity projected.” So what I’ve learned is, every day working a little bit harder to love myself, and by loving myself, I’m able to show up for myself and for those around me.