The stage is a cemetery of gray file boxes. Dr. Alfred A. Gross (Derek Lucci) shuffles on, back to the audience, with no introduction. A gay psychiatrist and early pioneer in the LGBTQ rights movement, Gross delivers, in vivid monologue, the story of his lifehis practice, his challenges, and the overlap of his work with the late Dr. John Fryer, the mysterious figure in a serial killer’s rubber mask on the front of the playbill. But this Dr. Gross is not merely the historical figure largely known for his liaisons with male clients and antagonistic relationships with mid-century gay rights groupsthis ghost knows his place in history.

He calls himself “the Cro-Magnon of homosexual freedom” to provide context for the white, male privilege that limited the work of him and his contemporaries“We were building the structure upon which you now are. Our vision is what allows you now to see where we were short-sighted.” Such is the compassion, dignity, and self-awareness afforded Gross and two other of Dr. Fryer’s intimates in Ain Gordon’s 217 Boxes of Dr. Henry Anonymous.

But who is Dr. John Fryer? 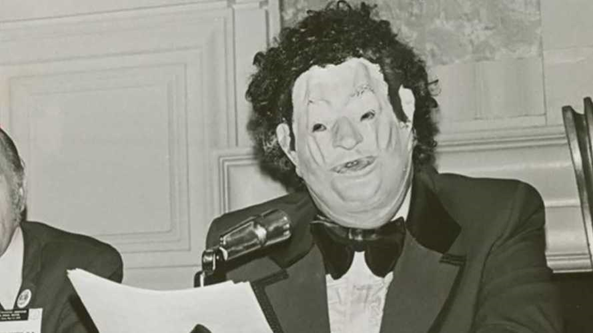 In 1972, Dr. John Fryer donned a mask and spoke as “Dr. Henry Anonymous” to out himself as a gay psychiatrist to a room full of other psychiatrists. The panel, “Psychiatry: Friend or Foe to the Homosexual: A Dialogue,” included lesbian activist Barbara Gittings, gay astronomer Dr. Franklin Kameny, and Fryerin disguiseas part of the American Psychiatric Association’s annual conference.

As a result of his speech, the APAin an historic turnaroundvoted to remove homosexuality as a mental illness from the Diagnostic and Statistical Manual of Mental Disorders the following year. Far from simply a victory of bureaucracy, its removal ended the practices of aversion therapy, chemical castration, and lobotomy as institutionally-sanctioned treatments for homosexuality. The 217 boxes of the play’s title refer to Fryer’s massive collection of documentscurrently held and maintained by the Historical Society of Pennsylvania in Philadelphiawhich serve as the source material for Gordon’s exhaustively researched work.

The cast of three charactersGross, Katherine M. Luder (Laura Esterman), and John Fryer’s father, Ercel Fryer (Ken Marks)tells its stories in monologue, one by one, to offer a remarkable, elegiac portrait of Dr. Fryer and the times in which he lived and worked. The characters are aware that things have changed, but they’re not omniscient or all-powerfulthey struggle to embrace the full force of their freedom as ghosts. Alfred stops to euphemize his wording at times, Katherine still has to treat her diabetes, and Ercel has a hard time saying “homosexual.” They are imperfect apologists for their secondary roles in queer history, lovingly rendered in three dimensions by master actors at the height of their powers. 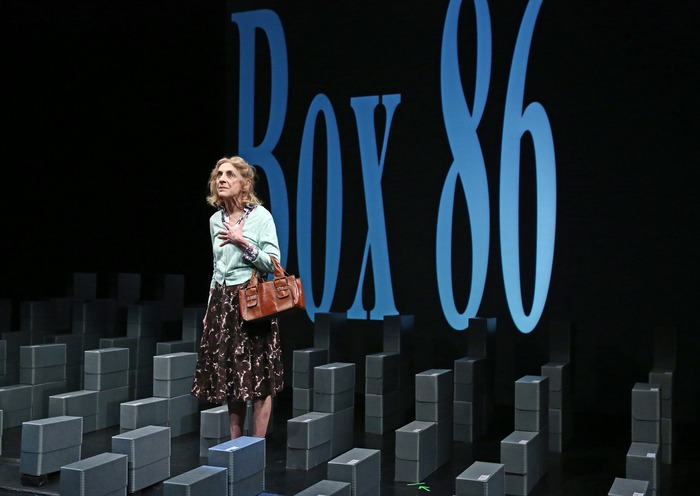 Audience members should be prepared to listen attentively, as each monologue is about 20 minutes long. Those after a rousing evening of revelry should look elsewhere, as the mood of this one is more funereal. But for those willing to sit with its heaviness, it offers a unique space for LGBTQ folks of all stripes to grieve, contemplate, and practice gratitude for the lives we get to lead as a result of the risks taken by our forebears. Moreover, the thesis of the playthat important change only happens when ordinary people take extraordinary actionsneeds the right kind of setup, and by the time it gets there, it’s a slam dunk.

Gross tells us exactly how to get to his box at the Historical Society of Pennsylvania (call number 3465, box #41); Luder says, “Everything here masks more that you can’t see.” Perhaps the play intends to prepare us to interact with historical documents as they areas text on paper, from which whole universes of imagination can arise with the right mindset. Gordon’s project is to interrogate history and reanimate characters swept away by mainstream narratives. Should it become our project, too?

217 Boxes of Dr. Henry Anonymous plays at the Baryshnikov Arts Center, 450 West 37th Street, New York, NY 10018, May 3–11, in tandem with the American Psychiatric Association’s 2018 conference. This production partners with Equality Forum, the nation’s “leading LGBT history organization,” and Pick Up Performance Co(s). More information, as well as supplemental materials, can be found at 217boxes.com.