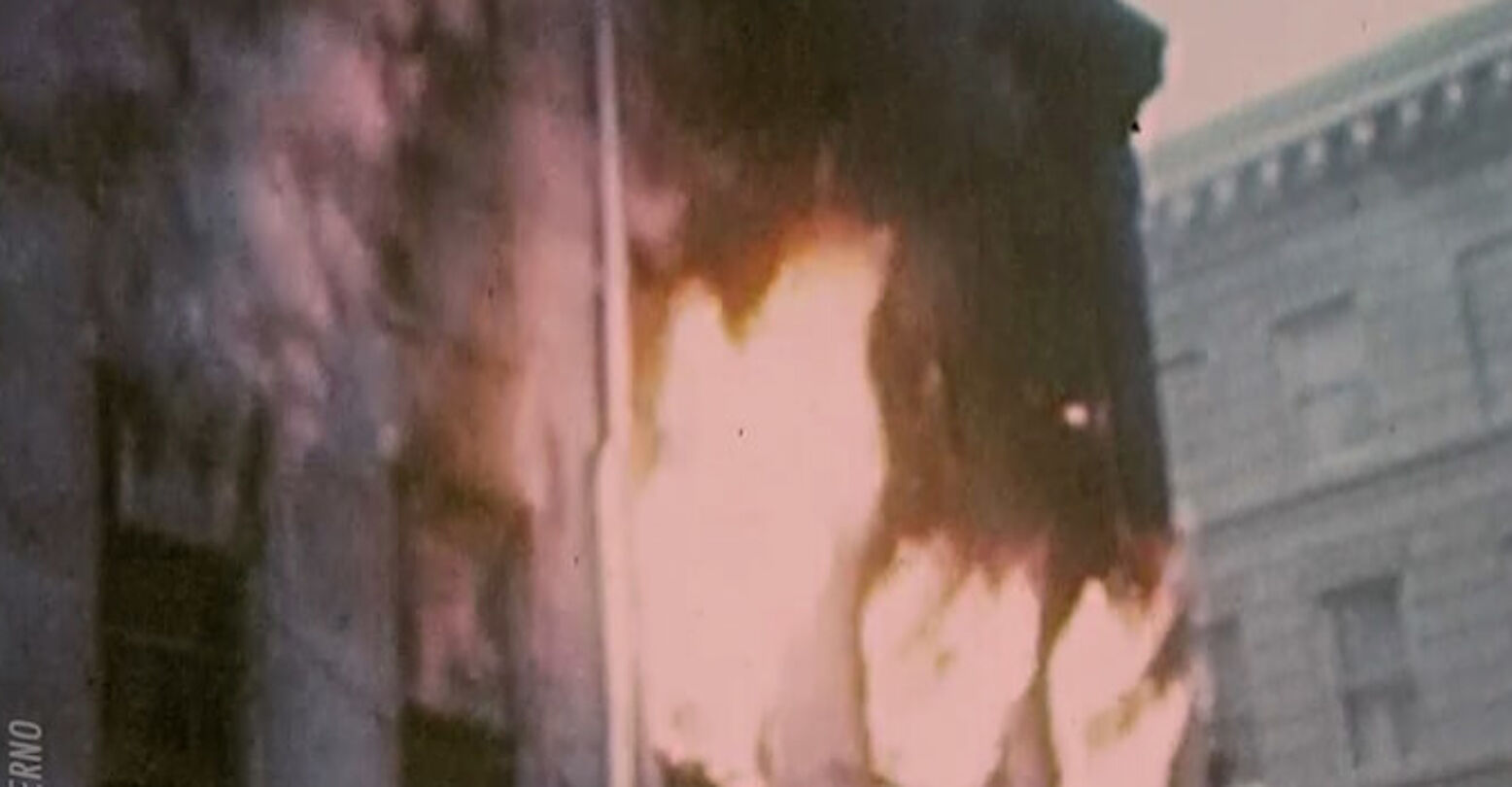 Over two years have passed since Omar Mateen walked into Pulse nightclub in Orlando and killed 49 people, but even now, we can still feel the ramifications of what happened that day. New media coverage and celebrity tributes flooded social media just a few months ago on the anniversary of the attack on June 12, and will presumably continue to do so for years to come on a day that still holds such pain for so many.

While reports have since claimed that the shooting wasn’t rooted in homophobia, the fact that such horrific acts are still commonplace in today’s society tells you everything you need to know about modern day attitudes towards the queer community. At least people are still talking about it though. Decades before the Pulse shooting took over as the deadliest incident of violence against LGBTQ people in U.S. history, a horrific massacre in a New Orleans gay club claimed the lives of 32 people on June 24, 1973.

Where were the tribute songs for those who burned in the arson attack that was ignited in The UpStairs Lounge all those years ago? While nearly $8 million has been raised for Pulse victims through a GoFundMe account, only $17,900 was collected by The National New Orleans Memorial Fund in the aftermath of the ‘Upstairs Inferno.’ Of course, tolerance for the queer community has come a long way since then, but 45 years later, it’s still vital that we pay tribute to a largely forgotten era in LGBTQ history that must be remembered if we are to ever achieve equality and keep new generations safe from these kind of attacks.

One filmmaker who has already done his best to educate people about the horrors of that fateful night is Robert L. Camina, who released a documentary about the massacre a couple of years ago that has since won numerous festival awards and was even invited to screen at the Library of Congress in 2017. Through exclusive interviews with the survivors and people who knew the deceased, Upstairs Inferno offers a disturbing snapshot of both the night in question and the subsequent impact that this attack had on the LGBTQ community at large.

Three years earlier, owner Phil Esteve opened the UpStairs Lounge on Halloween with the help of his friend, bartender Buddy Rasmussen. For the first third of Upstairs Inferno, the focus is on the community that this pair formed in the bar, helping patrons express their sexuality without fear of reprisal. Not only did the UpStairs Lounge play host to cross-gender plays affectionately referred to as “nellydramas”, but this safe space also became the temporary home of the Metropolitan Community Church (MCC) in New Orleans, a religious organization that uniquely catered to LGBTQ Christians.

More than just a bar, this was a place where people could escape the intolerance of everyday society in the early ‘70s and feel truly safe. By highlighting the vital role that the UpStairs Lounge played for the local queer community, Camina’s film forces us to emotionally invest even more in everything that comes next, to the point where it’s almost too hard to watch. It’s vital that we do, though, or the memory of these 32 people who lost their lives could very well disappear. 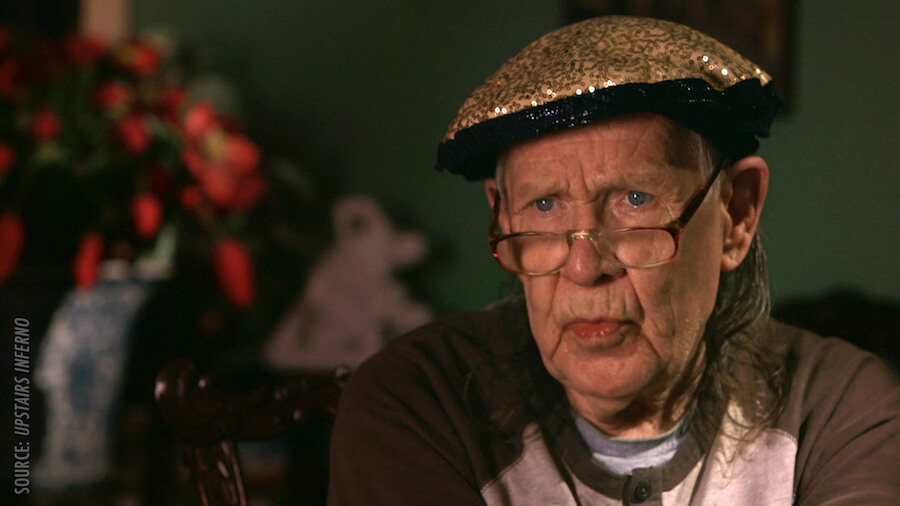 On the evening of June 24, 1973, an unknown assailant set fire to the carpeted stairwell under the UpStairs Lounge and then rang the doorbell. In response, co-founder Buddy Rasmussen asked a regular named Luther Boggs to answer the door, unwittingly sending him to his death. The resulting backdraft created a fireball that then tore through the bar, which regrettably didn’t have an emergency exit. Panic took hold and people clamored for safety, but the fire moved fast and each of the windows was covered with security bars, so only a few made it out alive.

Rasmussen managed to lead about 20 people out through a back door to safety, but in an attempt to prevent the fire from spreading, he then locked the fire escape door, which trapped the people left behind. Onlookers from outside could see people burning to death at the windows, including MCC pastor, Bill Larson, who was caught in the bars, trying to squeeze through.

Assistant pastor George Mitchell was one of the lucky few to escape the fire, but when he realized that his boyfriend hadn’t joined him outside, he ran back in to rescue him. The two were later found dead with their bodies wrapped around each other, seeking comfort in their final moments together. Mitchell’s son, Duane, was only 11 years old at the time of his father’s death. In Upstairs Inferno, the now grown man gives a testament explaining how it took days for him to learn that his father had died. While Duane didn’t know that his father was gay at the time, he now calls him a “hero” in one of the film’s most moving moments.

It took just 16 minutes for the firefighters to contain the blaze upon arriving, only to discover the bodies of 28 people piled up at various doors and windows who had presumably tried to escape. Four more later died from injuries sustained in the fire, bringing the total up to 32. Although a few of the casualties might have been straight, this massacre was nonetheless the largest attack against LGBTQ people in U.S. history up until the Pulse shooting 43 years later.

What’s almost worse than the hatred that inspired this attack in the first place is the mockery that these victims endured in the aftermath. Not only did the Governor and Mayor of the city both refuse to publicly comment on the massacre, but the wider community of New Orleans either ignored the fire entirely or jokingly referred to it as “the fruit fry.”

With no official day of mourning appointed by the city, Carmina instead devotes a huge chunk of Upstairs Inferno to the impact that this tragedy had in the weeks, months and even years that followed. Although no one was ever arrested for the fire itself, a number of interviewees suggest that the man in question might have been Rodger Nunez, a man who had left the bar earlier that day in a fit of rage who then went on to kill himself just one year later.

Even people who weren’t present at the UpStairs Lounge that day were affected. Local writer Toni Pizanie didn’t attend the initial memorials because she “didn’t want my being a lesbian to mess up my future,” but decades later, she helped organize the 25th anniversary memorial in 1998. Fear of being associated with the queerness of the victims extended even to one of the parents who refused to claim the body of their son because it had been found at a gay bar. Churches also turned away mourners and the newspapers that did bother to cover the tragedy did so by including homophobic quotes from citizens disgusted by what the UpStairs Lounge had represented.

In a state where homosexual acts were still illegal and queerness itself remained in the American Diagnostic and Statistical Manual of Mental Disorders, people feared that grieving openly could lead to the loss of their jobs or families. What’s even more disgusting is that the identity of some victims remain unknown even now, because no one spoke up for them after they went missing. Unfortunately, such cruelty was the reality for many gay men back in 1973.

This massacre will always remain one of the most agonizing chapters in LGBTQ history, but the Upstairs Inferno film still strives to end on a more positive note, arguing that tragedies of this nature can help galvanize a community in crisis and help build acceptance on a wider scale. Although it was devastating to see an attack of this scale again in the form of 2016’s Pulse shooting, the global outpouring of compassion that followed was worlds away from what people endured in the wake of The UpStairs Lounge fire.

As painful as this all might be, at least progress is being made. The next step now is to prevent attacks of this kind from even happening in the first place and to ensure that the memory of those we’ve lost is never forgotten, lest history repeat itself yet again.