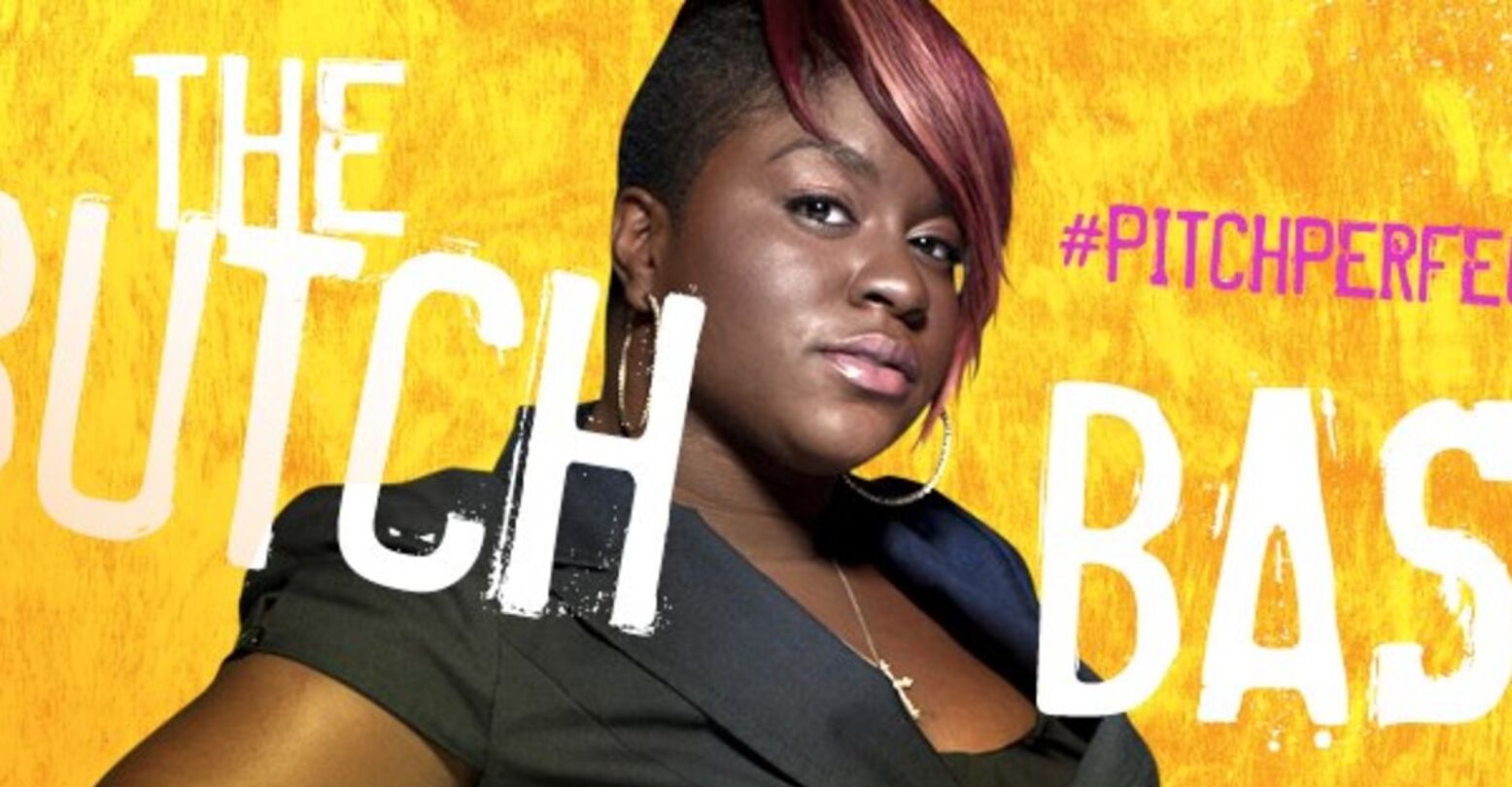 Lez be honest: Pitch Perfect has always been problematic.

As a queer female fan of the franchise, I can’t help but feel disappointed by the offensive lesbian jokes that were laced throughout each Pitch Perfect movie. The three-quel hit theaters December 22 and tapped into all the nostalgia and lore of the previous films, which of course meant continuing to portray queer women as predatory outcasts. While it’s nice to see queer women of color represented at all, the films are totally tainted by the light in which Cynthia Rose, said token lesbian, is painted.

Admittedly, the derogatory jokes in the third installment weren’t as pervasive as they were in the first and second films. In the original Pitch Perfect, Cynthia Rose, played by Ester Dean, is introduced during an audition when a character misgenders her. She reveals her pink hairdo, to which the character quips, “Oh, not a dude.”

Throughout the entire movie, Cynthia Rose being closeted is a running joke. The other girlsspecifically Fat Amy (played by Rebel Wilson)pick on her and make gay jokes until she comes out. After the aca-initiation ceremony, Fat Amy suggests that one of the 10 girls on the Barden Bellas is probably a lesbian, placing her bet on “Black Beauty.” From here on out, Fat Amy makes it her mission to out Cynthia Rose, and when Cynthia does finally come out, Fat Amy celebrates, “Whoomp, there it is,” like it was somehow a relief for Amy to know the truth.

The Bellas do nothing but make Cynthia Rose feel like a social pariah. At one point, before she comes out, the squad leader Aubrey actually outs her when she says, “No more wasting time on school or work or boyfriendsor partners. I’m sorry, Cynthia Rose.” Cynthia darts her head around in fear, feeling the eyes closing in on her.

As a queer woman, watching this play out is mortifying for multiple reasons. For one, an environment where queerness is made out to be gross and feared isn’t conducive to coming outit’s almost as if the Bellas cosplay as allies while silently making Cynthia feel unsafe. In real life, the effects of LGBTQ discrimination, as portrayed on-screen in Pitch Perfect, are real and can severely damage one’s mental health. Outing someone before they’re ready can lead to suicide.

Even without such grave effects, being the only queer woman in a group of straight women can sometimes be intimidating. We are raised to believe that homosexuality falls somewhere on the spectrum from wrong to uncommon, so at some point, queer people are forced to reckon with our own sense of internalized homophobia. With that being said, queer women typically act oppositely from Cynthia Rose; we’re so horrified at the thought of straight women viewing us as predatory that we shut down. We glance away when you’re changing, we set boundaries, and we don’t try to pressure our friends into doing something they don’t want to do. But in Pitch Perfect, being predatory is basically Cynthia’s sole personality trait.

In the first movie, she randomly gropes Stacie’s breasts during a group argument, to which Stacie snaps, “Get off of me,” and backs away from her in fear and disgust. Cynthia is always ogling Stacie or touching her without consent. In another scene, Fat Amy gets smacked in the face by a burrito and falls to the ground, and Cynthia Rose jumps on the opportunity to straddle Amy, hold her down, and try and force mouth-to-mouth resuscitation. Amy, obviously uncomfortable, shoves her off and spits, “No need for that.”

In the second film, when the girls are all forced to sleep in a tent together, Cynthia Rose offers a creepy smirk and quips, “I hope the sun never comes up.” While in the dark, Staciewho at this point is a victim of serial sexual abusefearfully asks Cynthia if she’s touching her goodies, and Cynthia says she is. So, not only does Cynthia Rose make every straight woman in the group feel uncomfortable because of her aggressive behavior, but she’s also committing nonconsensual sexual acts. The scene is revoltingand as a queer woman, it made my heart sink, because it further reinforces a harmful (and untrue) stereotype about lesbians.

Sexual assault aside, Cynthia Rose is always checking out the other girls. In Pitch Perfect 2, we’re introduced to Hailee Steinfeld’s character Emily Junk, whose mother was a famed Bella. She shows up at the Bellas’ house to audition and the women almost slam the door in her face until she yells, “I’m a Junk!” Cynthia Rose jeers, “What’d you say about your junk?” and ushers Emily inside, checking her out along the way. In Pitch Perfect 3, Emily gets all dressed up for a night out and Cynthia can’t help but look her up and down in a sleazy, misogynistic way. Every time Cynthia is confronted with attraction to another girl, it’s portrayed in an icky light that makes the other womenand the audiencecringe.

Stepping away from our out lesbian character, all three movies share another queer throughline: flirting with the idea of a romance between Beca and Chloe, played by Anna Kendrick and Brittany Snow, respectively. Chloe is always coquettish and aggressive with Beca, whether she’s getting into her shower with her, pulling her close to say they’re going to be very close friends, or wrapping her arms around her during training. However, Beca always resists in a way that reflects the general tone of the movie’s views toward lesbianism: it’s weird and wrong.

In the same problematic tent scene in Pitch Perfect 2, Chloe offers Beca a back rub and admits that she wishes she experimented more in college, and Beca says, “You’re so weird,” before turning away from her, uncomfortable again. The next movie follows suit: Chloe corners Beca to have an intense chat, and in doing so, gropes her chest and pushes her into a wall. Just then, the other Bellas approach and spot Beca and Chloe extremely close, with Chloe’s hands still on Beca’s breasts. Aubrey asks what they’re doing, and they both surreptitiously reply, “Nothing!” Like all the other queer moments in Pitch Perfect, girl-on-girl touching is displayed as secretive and the product of nonconsensual encounters.

But just because Beca and Chloe never actually happen doesn’t mean the studio can’t promote it as such. Last week, Universal Pictures tweeted out a “Bechloe” montage, including the boob-grab clip in Pitch Perfect 3, luring, “Will Bechloe ever happen?” This storyline has never been an integral part of the film and has always functioned as just a running joke, so Universal’s tweet was an unfair, blatant grab at baiting queer fans into seeing the movie, and queer women were hurt. What’s even stranger: Beca repeatedly denies Chloe’s advancesdespite her character’s own sexual confusion in Pitch Perfect 2.

Beca’s attraction to her opponent Kommissar, the leader of the German acapella group Das Sound Machine, is a major punch-line in the second movie. She repeatedly gets overwhelmed by her opponent’s perfect figure, and even blurts out that she’s feeling sexually confused during a confrontation with her. While the jokes Beca makes about questioning her own sexuality aren’t problematic, it’s arbitrarily placed and confusingly juxtaposed with the rest of the films’ POV on queerness.

At the end of Pitch Perfect 3, Chloe comes to terms with the inevitable; the Bellas as we know them must go their separate ways. Attempting a heartfelt message, she quips, “I am inside of all of you and it feels so good.” Like clockwork, all the women get totally skeeved out.

The Pitch Perfect franchise was disappointing, and queer women are almost never represented fairly in major studio comedies. But luckily, it has been done well before, so I have high hopes for the future of queer female comedies.