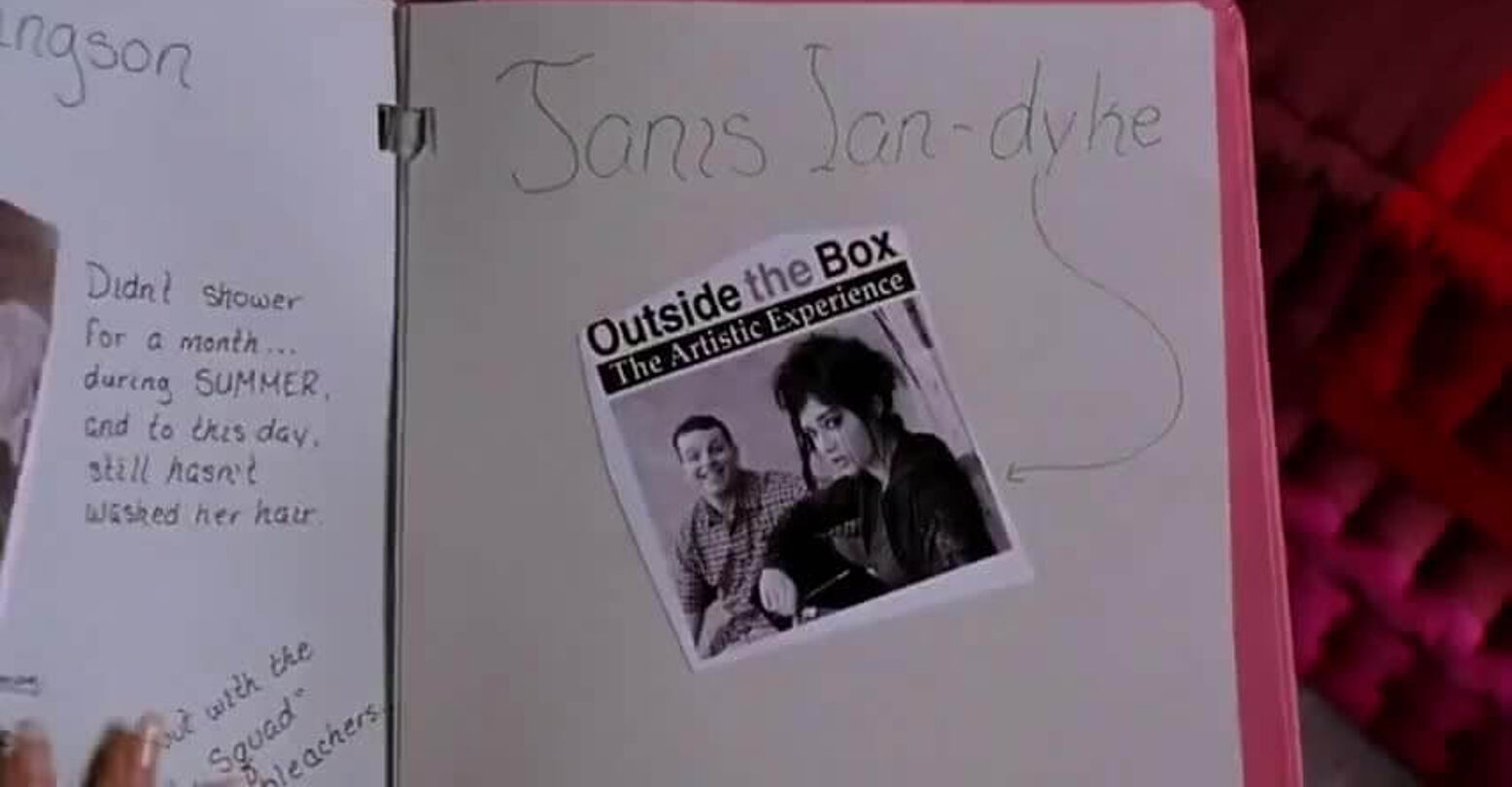 In the 14 years since Mean Girls’ release, Janis Ian has been lionized for her sharp-tongued quips, her goth teen-chic getups, and her rise to fame as a lesbian icon. Even though Lizzy Caplan’s now infamous character may or may not actually be queer, queer women have embraced her as their own. Not only did Janis coin the phrase, “I’ve got a big lesbian crush on you,” but she is and always has been a role model for us.

No person has ever been more unabashedly herself in the face of homophobia than Janis, and that’s more than commendable—it’s heroic. Janis Ian gave queer women someone to look up to, a blueprint for How to Lesbian. So, on this October 3rd, also known as Mean Girls Day, here’s to you, Janis.

Janis — when you said “Your mom’s chest hair,” I felt that.

Your character was named for the iconic lesbian singer-songwriter of the same name, who came out as gay in the early ’90s. And while you’re nothing like your namesake, a folk singer from New York City, we know that queer people come in all forms. Some are 1960s folk lesbians who wear wide brim hats and rough padded fingertips; some are black-hearted 2000s scene queens with loose tendrils of hair gelled to the sides of their face; some paint sincere portraits of their friends in an extremely not gay way, just because they’re friends and friends love each other and nothing else. They’re all great, and you embody so many of the qualities that queer women admire in other women.

To quote stan Twitter, “Ugh, Janis, your mind.” It’s your strength and persistence in the midst of homophobia and bullying that was so noteworthy. You never once denigrated LGBTQ people or threw us under the bus to take the heat off of yourself—even I, an out and proud lesbian, can’t say I did the same when I was bullied in high school. You’re a perfect best friend to Damian, and exactly the kind of ally that queer people need; one who uses herself as a human shield to protect us; one who knows that being called “gay” or “lesbian” isn’t a bad thing, but rather that being queer is a gift.

When you were bullied by the beast of North Shore, Regina George, you took a stand. She dared you to dive into a big pile of girls, which honestly sounds so warm and comforting regardless of any sexuality, and you did it — but not before throwing your arms up and performing the queer female mating call that has stood the test of time: The “ayayayay” battle cry from Xena: Warrior Princess. You gave young queer girls at North Shore a reason to believe it gets better after the Wrath of Regina — sure, you’re not real, and thus neither are these imaginary queer women at North Shore, but allow me to do what queer women do best and project my emotional trauma on to a person I adore.

Plus, there are your fashion choices — some would argue a lack thereof, but not me. I long for the day when a woman will drag her fingers through my hair and get stuck on my ’90s-style hairclip from Claire’s. You were a style icon in your own right, from your jet-black locks to your knee-high striped socks and your chunky combat boots. And lest we forget the once-cherished 2000s lewk of sporting a graphic tee over a long-sleeved shirt. Or your midnight-colored JNCO jeans. Or your oversized utility jackets with endless pocket options. In 2004, I was still clutched in the vice-grip of heteronormativity, and I didn’t fully appreciate your unique fashions. But now, I lust over your “Rubbish” shirt and loosely-buttoned work uniform, the warm embrace of your orange apron, and being your plus one to an art competition.

I know you and Damian made the perfect prom dates, and your matching ruffled tuxedo shirts, purple suits and spotted bowties made for a gay outfit that will be burned into the back of my skull until the day I die. But even still, I wish I could’ve been your date. And though you found your weirdo love story in Kevin Gnapoor, who appreciated your lesbian — er, Lebanese — heritage, I hope you know that you are seen.

We see you, and if you’re straight that’s cool — but if you’re queer and you find out in college and subsequently fall in love with another woman who also has a gay folk-rock namesake, like Ani or some shit,  that’s cool too. You will always be welcome in the rainbow arms of the queer community, even though you’re not real and I’m speaking to an imaginary character torn from the great mind of Tina Fey.

Janis — we see you. We love you. We would love to drink awesome shooters with you, listen to awesome music, and then just sit around and soak up each other’s awesomeness. And if you’re looking for an all-girls pool party invite, come to mine. There will be girls there in their bathing suits.