What’s the matter with Alabama and Mississippi?

A Tuesday report from the American Values Atlas project at the Public Religion Research Institute (PRRI) shows that a majority of residents in these two Southern states still oppose same-sex unionseven three years after the Supreme Court legalized marriage equality.

Of the 1,100 Alabamians polled by PRRI, just 41 percent came out in favor of the freedom to marry. In contrast, 51 percent of state residents do not believe LGBTQ partners should have the right to wed.

The PRRI findings may not be a total surprise, as these states have some of the nation’s harshest laws targeting LGBTQ people. In 2015, Mississippi passed House Bill 1523, a “religious freedom” law allowing sweeping discrimination against queer and trans individuals in nearly every aspect of public life.

Meanwhile, around 10 percent of residents in these states claimed they weren’t sure of their stance on the issue or simply refused to answer.

On the flip side, the most affirming states were Vermont and Massachusettswhich tied for the top spot. Eighty percent of residents in each state supported marriage equality. Other states with wide majorities favoring the freedom to marry included Rhode Island (78 percent), Connecticut (73 percent), New Hampshire (73 percent), Washington (73 percent), and Maine (71 percent).

Overall, 61 percent of all Americans believe queer couples should have the right to marry, while just 30 percent believe marriage should be exclusive to heterosexuals. That’s a significant increase in support from four years ago, when 52 percent of people in the U.S. supported same-sex unions.

But while the nation makes significant strides in the acceptance of LGBTQ people, statistics show many areas of the country lag behind.

While 70 percent of Americans support nondiscrimination laws preventing bias against LGBTQ people, the Deep South is still warming up to the concept. States with the lowest support for inclusive protections in housing and employment include Mississippi (57 percent), Alabama (58 percent), North Dakota (58 percent), Tennessee (60 percent), West Virginia (61 percent), and Montana (61 percent). 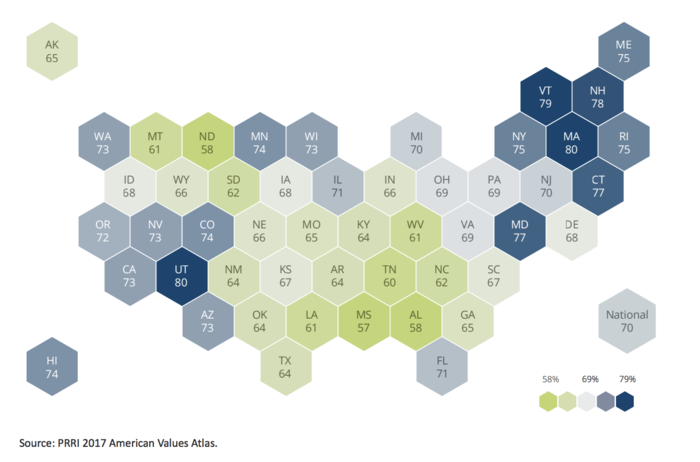 Three states actually came out in support of discriminationat least when it comes to religious entities providing services to members of the LGBTQ community.

Residents of Utah (48 percent), North Dakota (49 percent), and South Dakota (49 percent) said it should be legal for businesses to deny service to queer and trans people on the basis of their sincerely held faith beliefs. Although Utah became the first Republican state to pass an LGBTQ-inclusive nondiscrimination law in 2015, critics noted the legislation left significant carve-outs exempting religious groups.

Overall, 60 percent of Americans say it should be illegal for businesses to refuse customers on their basis of their gender identity or sexual orientation. 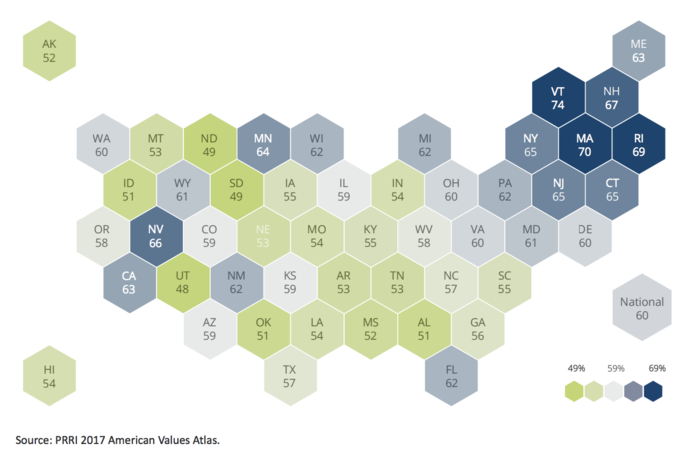 The American Values Atlas noted a number of significant milestones as the data shows increasing support for LGBTQ rights across the board. For the first time, a majority of U.S. Muslims (51 percent) say they support same-sex unions, while just over a third (34 percent) oppose marriage equality.

Those number have flipped since 2014, when 51 percent of Muslims said they were against the freedom to marry.

But as these groups move to the left on LGBTQ rights, a handful of religious groups still strongly oppose same-sex unions. Just 13 percent of Jehovah’s Witnesses support the right of all couples to wed, while nearly six in 10 white evangelical Protestants (58 percent) believe that marriage should be between one man and one woman.

Support for the freedom to marry among Mormons lags at 40 percent.

PRRI notes that even these conservative populations are making progress on marriage equalityif more slowly than other groups. Opposition to same-sex unions among Mormons has dropped 15 percentage points over the last four years, decreasing from 68 percent to 53 percent.