During the 2018 Winter Olympics, 28-year-old figure skater Adam Rippon became the first openly gay athlete to make the U.S. Winter Olympic team. He emerged from the games as a prominent LGBTQ figure, but not just because of this milestone achievement.

When it was announced that Vice President Mike Pence would be leading the US delegation of Olympians, Rippon expressed his disapproval.

His remarks got national attention, with Pence even attempting to set up a meeting between them. Rippon refused, but his words created a dialogue about supporting LGBTQ youth, which continued after the Olympics concluded.

In March, Rippon delivered a powerful speech while receiving the Human Rights Campaign’s Visibility Award. In June, he and fellow openly-gay Winter Olympian Gus Kenworthy will co-host Trevor Live, an annual event in New York to raise funds for The Trevor Project, the non-profit which works to prevent LGBTQ suicide.

I spoke to Rippon, who just recently won Dancing With the Stars, about making the decision to speak out during the Olympics, dealing with criticism, and how he recommends people best support LGBTQ youth. 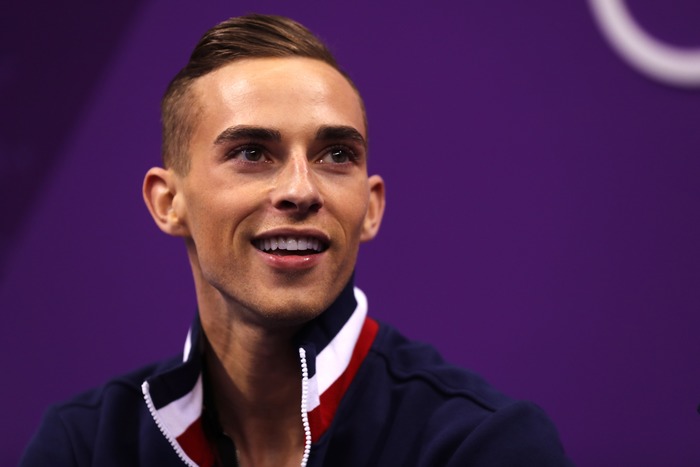 How did you deal with the fallout from speaking out against Mike Pence during the Olympics?

I mean I definitely got my fair share of “stay in your lane” comments, as I get often. But, I think it’s important to say what you think is right, and say what you believe in.

I also think it’s important to be tactful, and not just say the first thing that comes to your mind. You should think about it.

If there is something you believe isn’t right, or is right, or it’s problem that just needs a voice, then speak out. If something is an issue that rings true to who you really are, then it doesn’t matter what other people think. But it needs to come from your heart. No matter what the issue is, people can always tell if its genuine and it’s coming from the heart.

What advice do you have for people who have an issue they want to speak out about, but are scared about the fallout?

If it’s something you truly believe in, and are truly passionate about, and it needs a voice and needs power, then go after it. It doesn’t matter what other people think, because the backlash is truly minimal, and it’s much more important how you feel about yourself, at the end of the day.

If you feel you’ve done something to better the world, or better someone else’s life, or help someone else, that’s what matters. If people have a problem with that, it’s their own problem, and it’s usually a reflection of what they think of themselves. Honestly, it’s usually a resistance to change, or being afraid of something.

If you’re confident, and believe in what you’re saying, then your point will get across.

Why did your words resonate with so many people?

What I think has really resonated with people is that I don’t think I have asked anyone to like me. I’ve just assumed that people would, and that made it easier to connect with them. I wasn’t asking for their approval. I was just presenting myself to the world and telling them, “You’re going to like me.”

A lot of times we, as gay people, want people to like us, and we ask people to like us. I think it was different for someone to go into Olympics as an out athlete and not ask for that approval, but almost demand it.

I wasn’t really expecting the attention, but I was ready for it. When you go into the Olympics anything can happen and there’s going to be a lot of attention.

But more than anything, and more than just being an out athlete, it’s important to speak up for things that you think matter.

It’s almost a responsibility to share your story, and where you come from, to make the journey of the people who come after you a little easier.

How can straight allies and members of the LGBTQ community best support LGBTQ youth?

I think the best thing an ally can do is find people who they believe are inspiring, or who they are impressed by, and share their story. No matter who you are, if we find young people who we find inspiring, we should embrace them and highlight what they do so we can lift each other up.

We, within the LGBTQ community, should also find stories and causes that we think are important, and elevate them.

How are things changing for LGBTQ youth?

Even right now, the change is so crazy to me, even in the small town I’m from.

I was just talking to my siblings who just recently graduated high school, or are in high school, and the amount of people they’re in school with who publicly identify as LGBTQ, is crazy to me. When I was young, no one publicly did.

But it’s sort of a sign of the times. Yes, there are definitely people and hurdles out there that we need to push past, but it’s so cool and it’s so inspiring. I mean I’m only 28, and kids who are 15, and 16, comfortably go to school, and chat with their friends, and can be open and share that part of themselves. It’s so foreign to me, and so awesome.