One of my earliest memories of going online happened visiting my aunt in Montreal. My cousins were older than me, and they had a computer with a modem along with a few AOL trial CDs around, each offering hundreds of free hours.

The company apparently spent over $300 million on them, which sounds about right since every house accumulated a small stack. (Eventually we used them as cheap coasters.) I convinced my dad to give me his credit card and, after my cousins bored and left me alone with the computer, I ventured into a gay chat room.

A young teenager raised in the suburbs, I knew that I liked the idea of binding up cute boys but no understanding beyond that. Given the chance to learn more about myself, I did the comically embarrassing thing of pretending to be an investigative reporter. I was writing a piece on gay sex, and I had questions!

A generous soul answered them, letting me know the type of sex he had, where he met men, and how long he’d known he was gay. When he turned around and asked me if I was gayboop!I left the chat room. But I had got more than I had hoped: I learned there were men like me out there and plenty of them.

Young people spent afternoons on AIM, along with ICQ and MSN Messenger, now able to chat with people from around the world, at a time when calling a nearby city could be prohibitively expensive. It became such a way of life that Carrie Bradshaw getting confused how to use AIM in the fourth season of “Sex and the City” to chat with her ex Aidan felt like a “programming the VCR” moment. (The modern equivalent would be adults confused by Snapchat.)

Yet the sex columnist overdramatically ducking behind her chair, worried her ex could physically see her when he went online, wasn’t completely off. Compared to our always on culture now, smartphones glued to our hands, being online at that time did feel a bit like running into someone at the coffee shop. It was always a pleasant surprise to see who was onlineand even reading people’s away messages brought on its own delight.

Now, our conversations are pervasive, never having clear beginnings and endings: I’ve found more than once waiting to verify if a chat was over before turning my attention elsewhere.

The announcement of AIM’s sunset evoked nostalgia among many queer men not just around the instant messaging service but the whole early AOL ecosystem. Suddenly, new spaces opened up for connecting with one another, both publicly and privately. You could hit it off with someone on a forum or dating site and then move that relationship forward to IM.

Part of the nostalgia likely comes from the formative period in my and my friends’ lives when we used AIM. But it also represented a simpler time, if only because technology was less sophisticated. We could only reach each other at a computer. It was a dedicated space.

Replies on Twitter, DMs on Instagram, videos on Snapchat, texts on Signal: nowadays, I chase people across platforms and yet none of it feels as engaged. We’re more connected than ever, but it feels somewhat hollower. My attention span is split in 12 ways and I know so is everyone else’s.

The era was by no means perfect.

My friend Zach points out that while he used AIM to chat with other queer men, and even checked out LGBTQ chat rooms for cities before applying to law school, he felt a sense of danger meeting strangers. Meeting people felt weird back then and it followed that the people who did it must be weird too.

I learned there were men like me out there and plenty of them.

But let’s be honest: for queer people, meeting strangers in all manner of places isn’t that weird. It feels like it took Tinder before straight people felt comfortable saying they met online. (OKCupid was just for nerds.) We know services like Grindr and Manhunt paved the way for that, but, like most things mainstreamed, never get any of the credit.

When I think of sub-populations on Twitter, like Gay Twitter or Black Twitter, I wonder if part of the ease and skill these groups have come from being outside the majority. For the most part, the world was made for straight white peoplethe more normative the betterand so they never had to explore or become comfortable with meeting and connecting with people in alternative ways.

Still, the risk has for the most part subsided. You can interact on a daily basis with many, many more people and that exposure doesn’t really put you at harm. In part, it is because we know so much more about one another: we get dozens of daily updates, including photos and videos, and you can assess how authentic this personand personais.

Another friend, Justin, mentions how one friendship in his AIM days ended after the girl he was talking to learned he, a boy who loved Silverchair and comic books, was black. He’d never hidden it but it also has never come up. Her awful behavior aside, it’s a reminder of how much construction we had to make up in our heads back then, during an era where a photo took 20 minutes, not seconds, to post.

Justin also noted how we’ve transformed what our conversations can do: take the increased activism online. Once dismissed as slacktivism, social media platforms have helped many people become more politically aware and vocal for causes they believe in. People can meet others invested in the same values and work toward marriage equality in Australia or against a racist, homophobe running for the Senate. 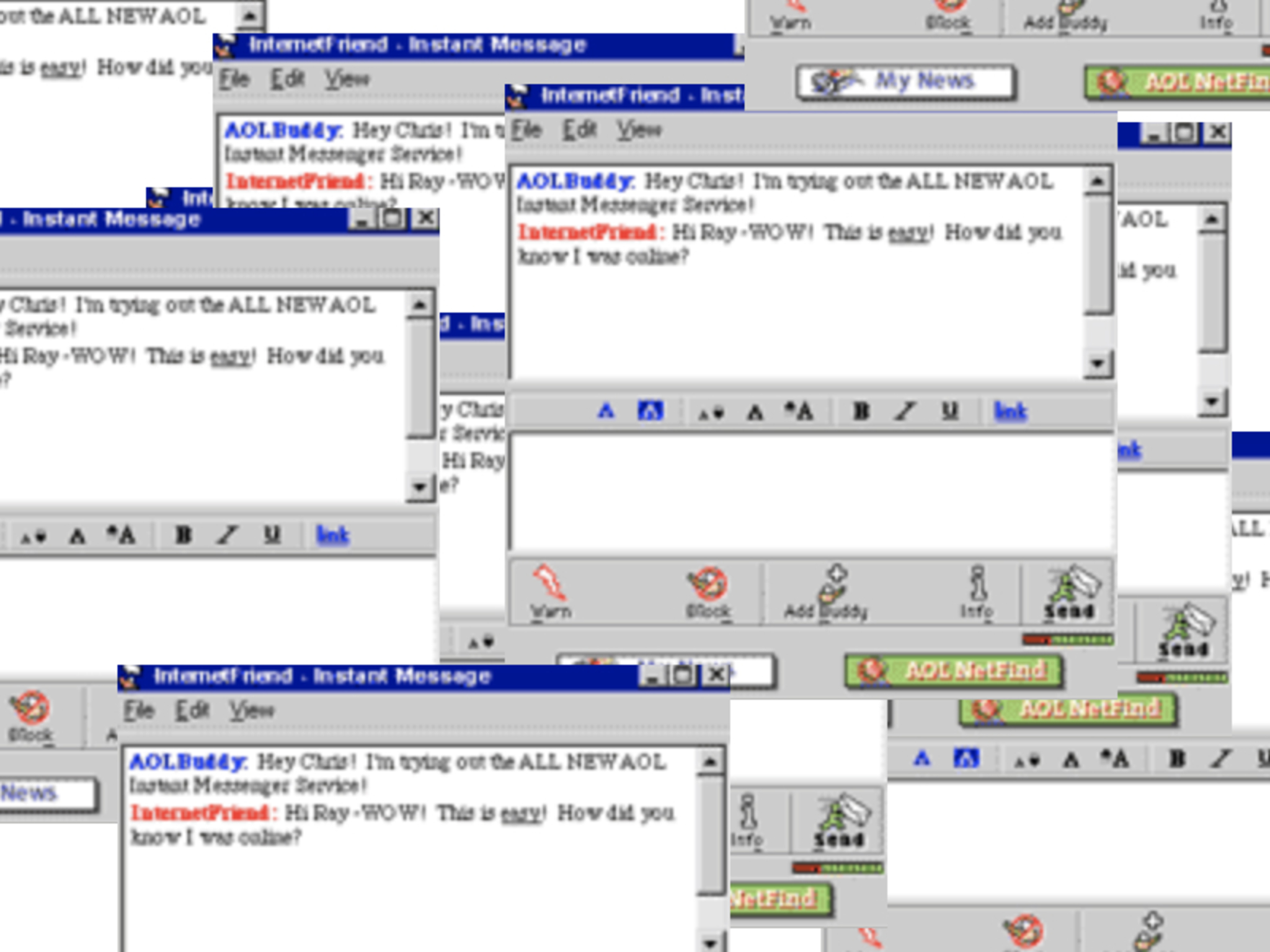 During my conversations with friends, I realized we all saw social media as the evolution of AIM, versus, say, WhatsApp.

Sure, functionally, people may use iMessage for group chats but in terms of the spirit of AIM when I meet new people, they’re more likely to get my Twitter handle than my phone number or email address. Platforms like Twitter, Facebook, Instagram, and Snapchat are where we share, engage, and connect but at a much larger and visible scale.

I also realized getting more came at a cost. These platforms drive us to interact at a frenzied pace, happily gobbling up the data we provide. As the source of their revenues, they’ve engineered the platforms to be as addicting as possible, rewarding users that go viral or draw lots of engagement.

The idea of a personal brand comes to mind, and surrounding the real conversations we’re having are nudges to become social media famous, with a promise that somehow that’ll pay off in the future. The accrual of followers and views and retweets: it’s all become a form of laborand I can’t help but wonder if we’re getting less than we’re giving up.

That’s my guess why the sound of a modem buzzing and trilling, once annoying, has almost becomes a form of meditative noise. It was, in some ways, a golden and innocent era.

The new book Kids These Days explores how the demands placed on children to succeed in the working world means replacing play with copious amounts of work. And, a lot of research has come out on why teens today are the most anxious ever, under the omnipresent pressure to be perfect. I think of that often when I’m using social media: people are always “on,” and putting in work.

We can’t go back in time, and progress marches forward, so I’ll take a moment to mourn that there are fewer spaces for a naive kid to pose as an investigative journalist, and never have to wonder how many likes that conversation might get.