This episode of Untucked started as any other, the girls grabbed their drinks, sat down and started talking about the challenge. However, it wasn’t long until Monique Heart brought up the elephant in the room.

“I would really like if y’all hoes learned how to play well and work with each other,” she said, pointing at Aquaria and The Vixen.

What Monique is referring to is the verbal scuffles that The Vixen and Aquaria have gotten into since pretty much day one. It started in the beginning of episode two with The Vixen bringing up drama between Aquaria and Miz Cracker that Aquaria felt was none of her business. Which, true.

The more recent incident was when Aquaria brought up the fact that The Vixen borrowed a wig for her “Best Drag” runway and won the challenge in it. I think it was at this point that Aquaria knew she fucked up. The Vixen immediately clapped back at her and Aquaria was left tripping over her words.

In the Untucked, this gets brought up again when Monique tries. The conversation is pretty calm at the beginning, The Vixen says that when Aquaria comes for her, she should know what she’s getting into. And yeah, she should. Although I think it’s clear that Aquaria’s wig comment was just a reaction to The Vixen’s original drama initiation, she should have just let that go and not tried to start shit again. That would have been safer.

So, after The Vixen explains her side, Monique and Cracker explain to Aquaria that she doesn’t really think about how she talks to people. After that, Dusty also came on to tell Aquaria what she thought of her. Then The Vixen came back and it was at this point that Aquaria started to cry. 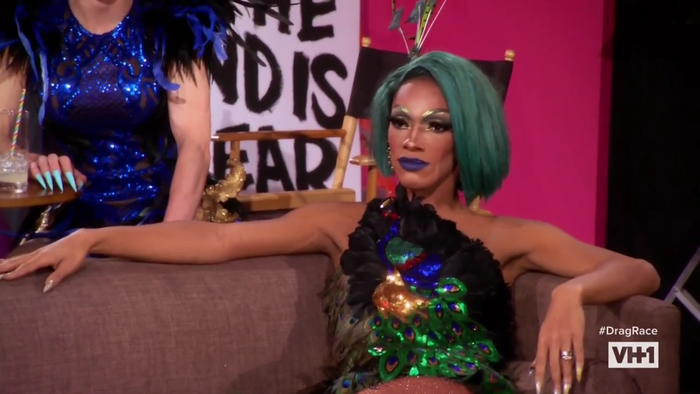 This is where things really get started.

“You say something, I say something, you start crying,” The Vixen said. “You have created a narrative [where] I am an angry black woman who has scared off the little white girl. When you get super defensive and tell me that I’m negativewhen I’m just responding to what you brought to methat will always read to these [cameras] as a race issue.”

In addition, Katya did a livestream a couple years ago talking about the double standards between black and white Drag Race queens, specifically citing how the show and fans treated Jasmine Masters.

This has been a huge problem and I’m beyond thrilled that it was addressed on the actual show (well the Untucked, but still). On the inverse though, it seemed pretty clear that Aquaria was crying because she was overwhelmed and trying to get her words out, not specifically because of what The Vixen said.

I understand why The Vixen was worried about her optics in that sceneshe has 10 years of Drag Race to support her pointbut I’ll still say that it’s a bit confusing. From the first words out of her mouth, she has portrayed herself as the aggressive queen. Like, that’s basically her entire brand so far, and that’s clearly intentional. She’s obviously one of the queens who realized that doing well in the show isn’t always as important as being memorable and having a character. As a fan, and as someone who writes about the show, I’m confused at what narrative The Vixen wants for herself and in some ways, I think she might be confused, too.

The Vixen continues, “I can’t with the fucking tears. It’s justit’s so gross.” Monique then comes in and tells The Vixen that this is her own shit. “You’re always on the defensive, so you’re just like ‘Bitch, I’m a 10 and I’m always at a 10 and I’m ready to attack,’ but I feel like that is going to hinder what is your blessing.”

Miz Cracker makes a request that The Vixen bring it down to a five when she’s reacting to people because “this is hard as it is.” While The Vixen immediately shut down this proposalwhich I probably would have done because it comes across as a form of tone policingI thought Cracker’s position was unique. While the rest of the queens were thinking about optics, Cracker was just trying to survive the production.

One thing that frustrated me about this interaction is that I just wish they let Aquaria cry in peace. I get itit bugs me when white people cry and make things about themselves, but the conclusion of this conversation amounted to basically nothing. Aquaria is silenced by fear of coming across racist and what could have been a really productive conversation about race dynamics on Drag Race turned into meaningless squabble.