Andrew Logan has been staging Alternative Miss World since 1972, a time before RuPaul’s Drag Race, when drag was a part of a long tradition of British cabaret performance. Previous iterations have seen queer icons such as Derek Jarman, Divine, David Hockney, and Grayson Perry competing and hosting, not to mention Andrew Logan himself, who is something of a cult figure in his own right. 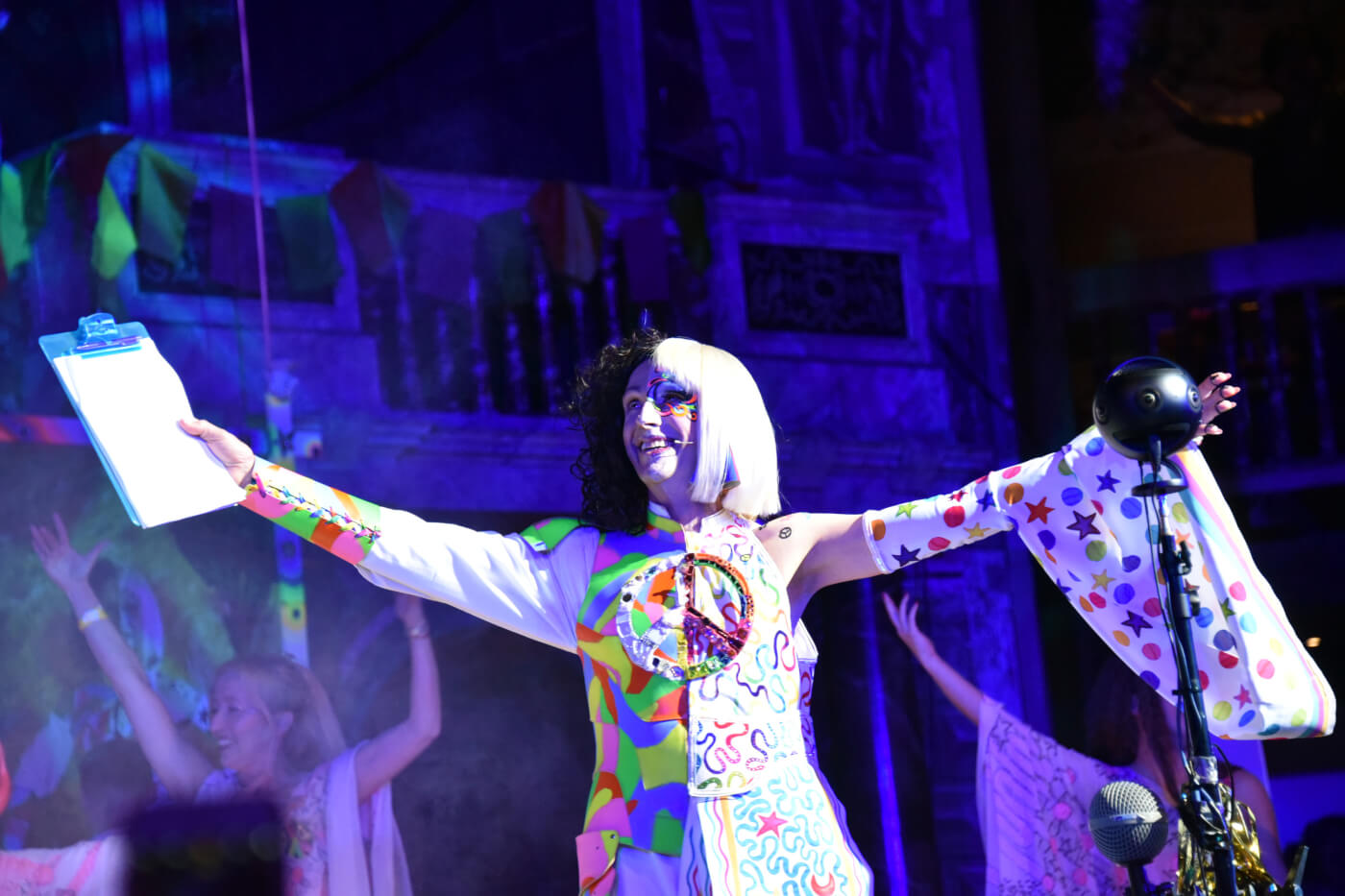 The only living UK artist with a gallery dedicated to his work, Logan’s brand of drag is compassionate, chaotic, and eclectic: women and men, groups and individuals, animatronics and papier-mâché all compete against one another with equal opportunity in his queer take on the Miss World pageant.  For Logan himself, “It’s about transformation. People say drag. Which it is. I mean drag is man to woman, woman to man. I think it’s rather a lack of imagination just man to woman. There’s so many other things you can be.”

This year’s sold-out event was highly anticipated, with the last edition taking place four years ago. Since its inception, this is only the 14th Alternative Miss World to be held. The 2018 theme was auspicious: ”Psychedelic Peace.“ It seemed especially appropriate given that a 700,000 strong protest against Brexit had taken place in London earlier that day. Logan was explicitly political about his intentions, calling it: “An evening themed around unity and connectedness, a temporary refuge away from the world’s strife, division, and obsession with wall-building,” and the evening’s events continued to make reference to the increasingly divisive and oppressive politics that have emerged in the Trump era. Indeed, it’s worth noting that Trump was a former owner of the Miss Universe pageant and this pageant is a welcome antidote to Trumpism.

“And all must love the human form,

In heathen, Turk, or Jew;

Where Mercy, Love, and Pity dwell

There God is dwelling too.”

It was a timely and moving reminder on the need for inclusivity in the queer scene and an admirable opening statement, though it’s worth noting that the contestants themselves were notably less ethnically diverse than in the Miss World competition. It nonetheless proudly placed Indian spirituality at its centre; following the statements of peace, the crowd were led in a meditative chant of “Om Shanti Shanti” by Angelika Grohmann.

For his own part, Andrew Logan has incorporated Hindu spirituality into his own life and artistic practice over many years, so this felt a natural expression of his practice and not a tokenistic gesture, even if there were moments when one felt as if they were inside a queer Marigold Hotel. The theme of psychedelic peace was inspired by a trip to India to see the Holi festival of colours, described as “the most psychedelic experience of [his] life.” 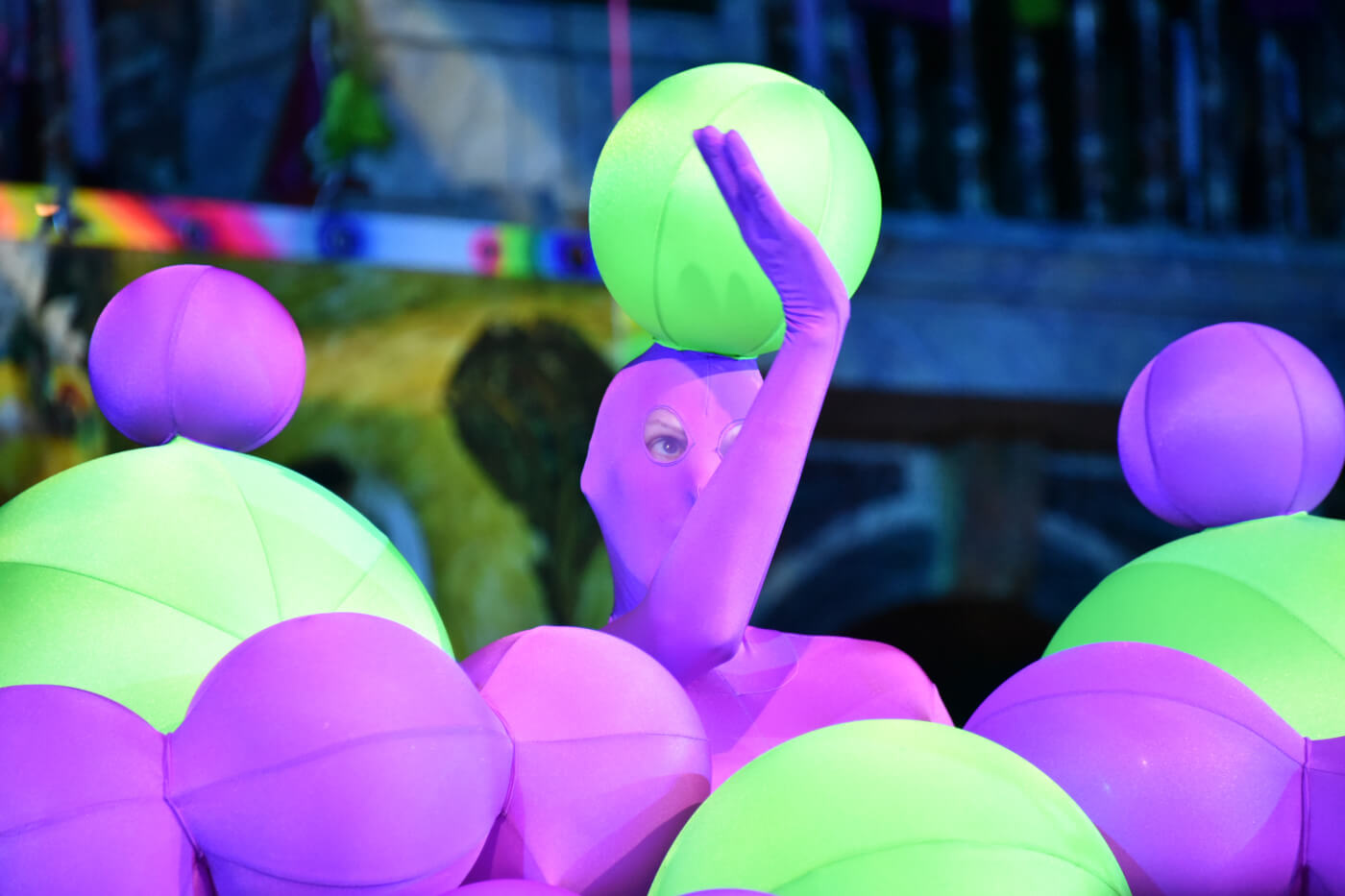 This psychedelia was picked up on by Miss Ann Hedonia, who underwent a performative transformation from a cold, pleasureless, conservative to become dedicated to world-peace and funding the NHS, all after being spiked with a tab of LSD.

As one of the youngest contestants, Miss Ann Hedonia, aka 23-year-old writer and model Harald Smart, was drawn to compete by the lure of being part of queer history. “I think I’ve been preparing mentally for almost a year… since I applied,” she told INTO. “It’s been this looming presence in a way; it’s like this legendary event.”

For Hedonia, Alternative Miss World stands as “a great example of uncompromising creativity and freedom. It’s a space of true expression and appreciation, everyone is welcome! It sounds like a bit of a cliche, but you really, really could feel the love from all directions on that stage.”

The outfits themselves were both theatrical and interactive. Miss Una Nimity’s dress unfurled into a giant rainbow flag with the globe sewn into the middle, above which she staged a “Punch and Judy”-style fight with puppets of Trump and Kim Jong-un before nuclear peace was brought through their defeat. 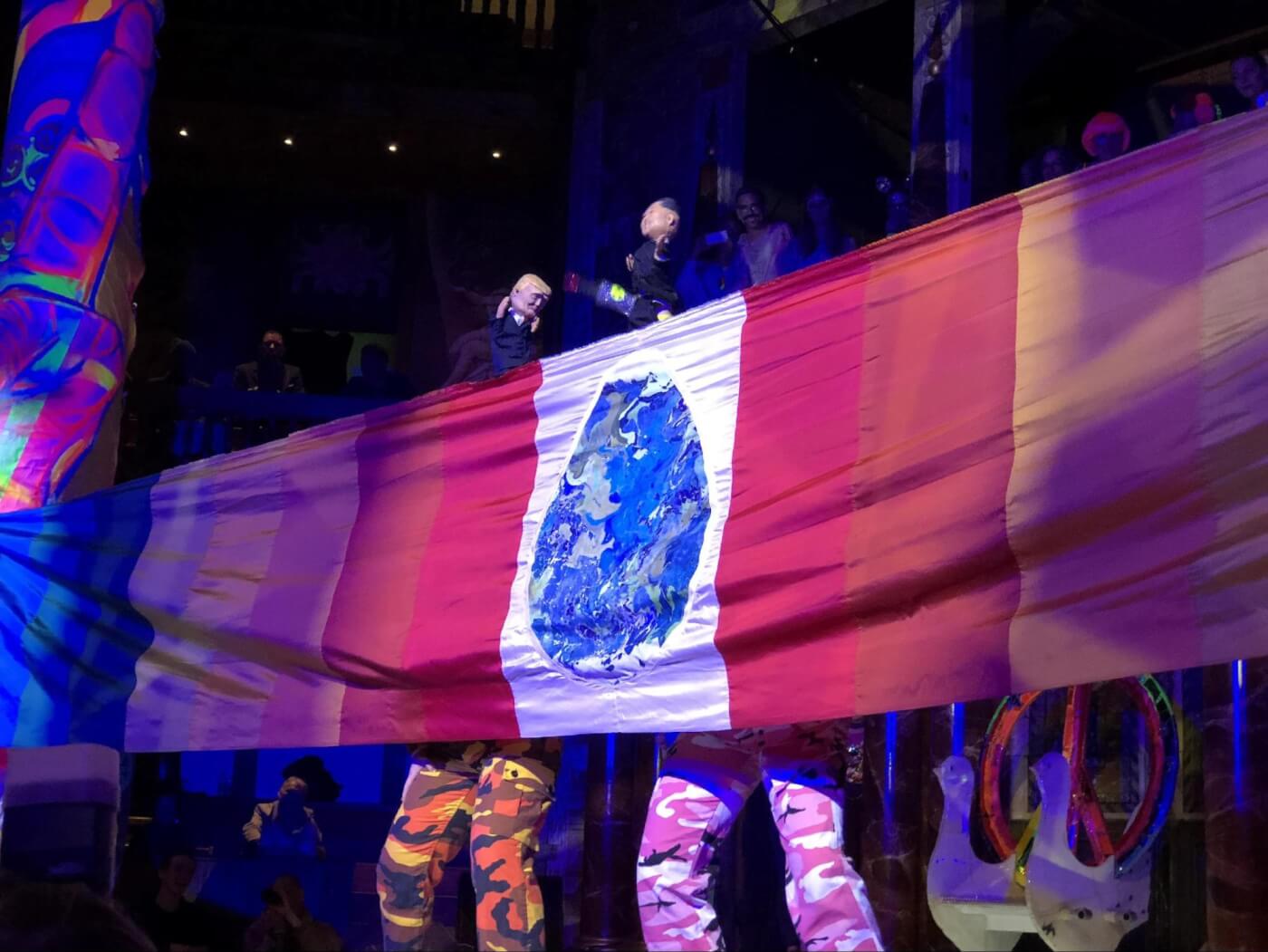 Another contestant, Miss Lysergic Acid, was left to the side of the stage when her animatronic love machine, which raised to almost the height of the globe, failed to descend. Miss Cariad Cymru On Me’s outfit was in part a frame of champagne flutes which they distributed to the eager crowd, declaring simply that if they were crowned the winner that they would make sure everyone had a good time.

As the contestants emerged one by one in the final round of evening wear, a single bum note was struck by the contestant who ultimately became the runner-up. The aptly titled Miss Who Gives A Fuck? emerged as a gameshow duo, with one dressed as a glittering version of Lord Shiva chanting “Shanti shanti/Mahatma Gandhi/Is really spinning in his grave.”

While it’s only right that drag should interrogate, parody, and critique the world around us, it was an offensive provocation that pointedly targeted the religious cultures of people of colour in an environment that was almost entirely Caucasian. Disappointingly, it was met with approving cheers from the crowd. Perhaps there was a joke that went over my head as a British-Panjabi queer but I think more disappointingly I got the point. For Logan’s own part this inclusion was not one for which they were personally responsible as they “never know the people who are entering. It’s really wonderful to have a surprise when I come out on stage.” Of course, those surprises can go either way as in this case. 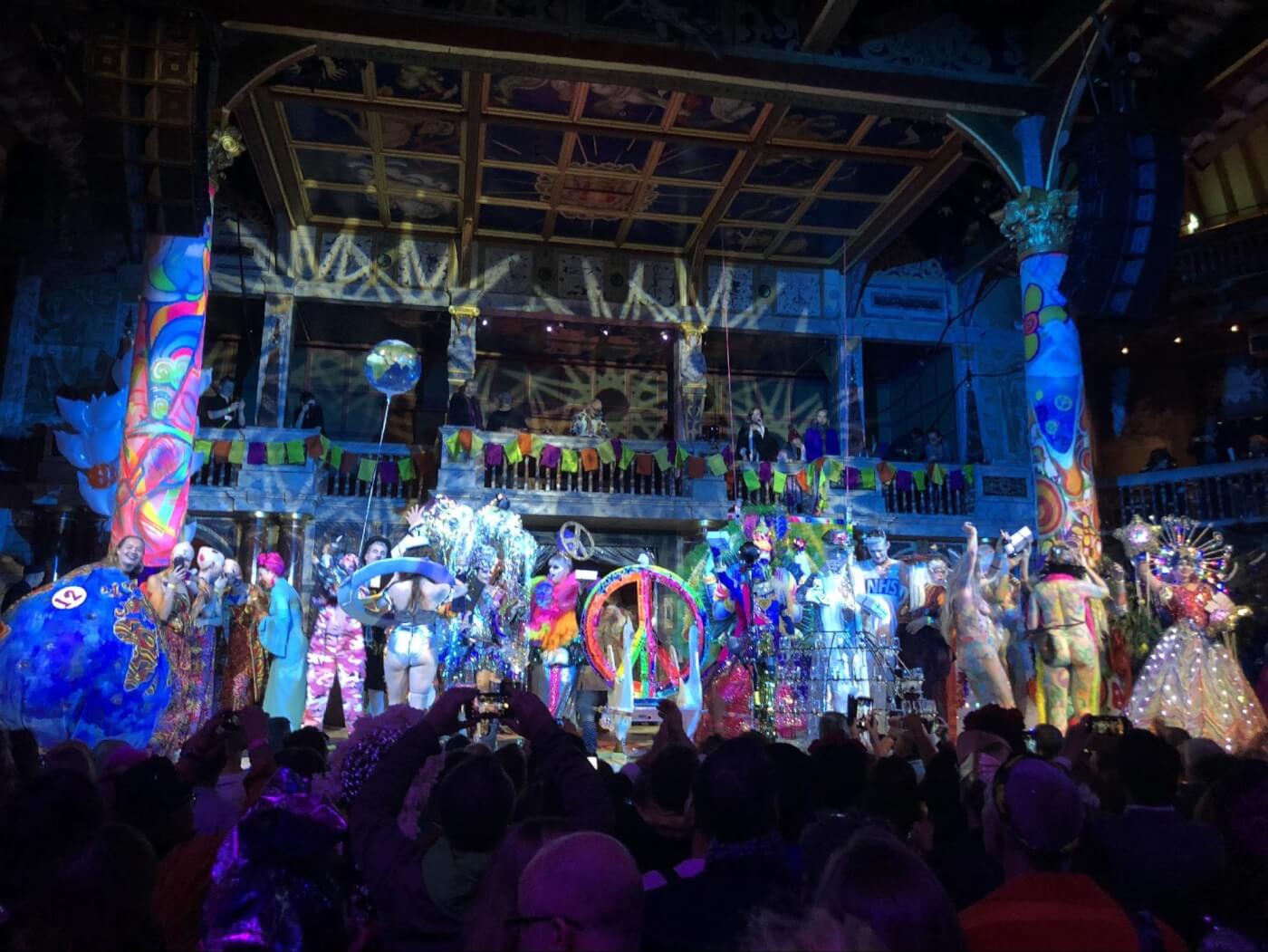 Ultimately, the deserving winner was Miss UFO, whose final costume bore 17 heads and a giant phallic inflatable that was bounced joyfully through the crowds before she herself was carried through the pit adorned by the coveted Logan-designed crown jewels. The only thing she had to say before being crowned was the peaceful chant of “Om,” which rang out resoundingly through Shakespeare’s Globe. 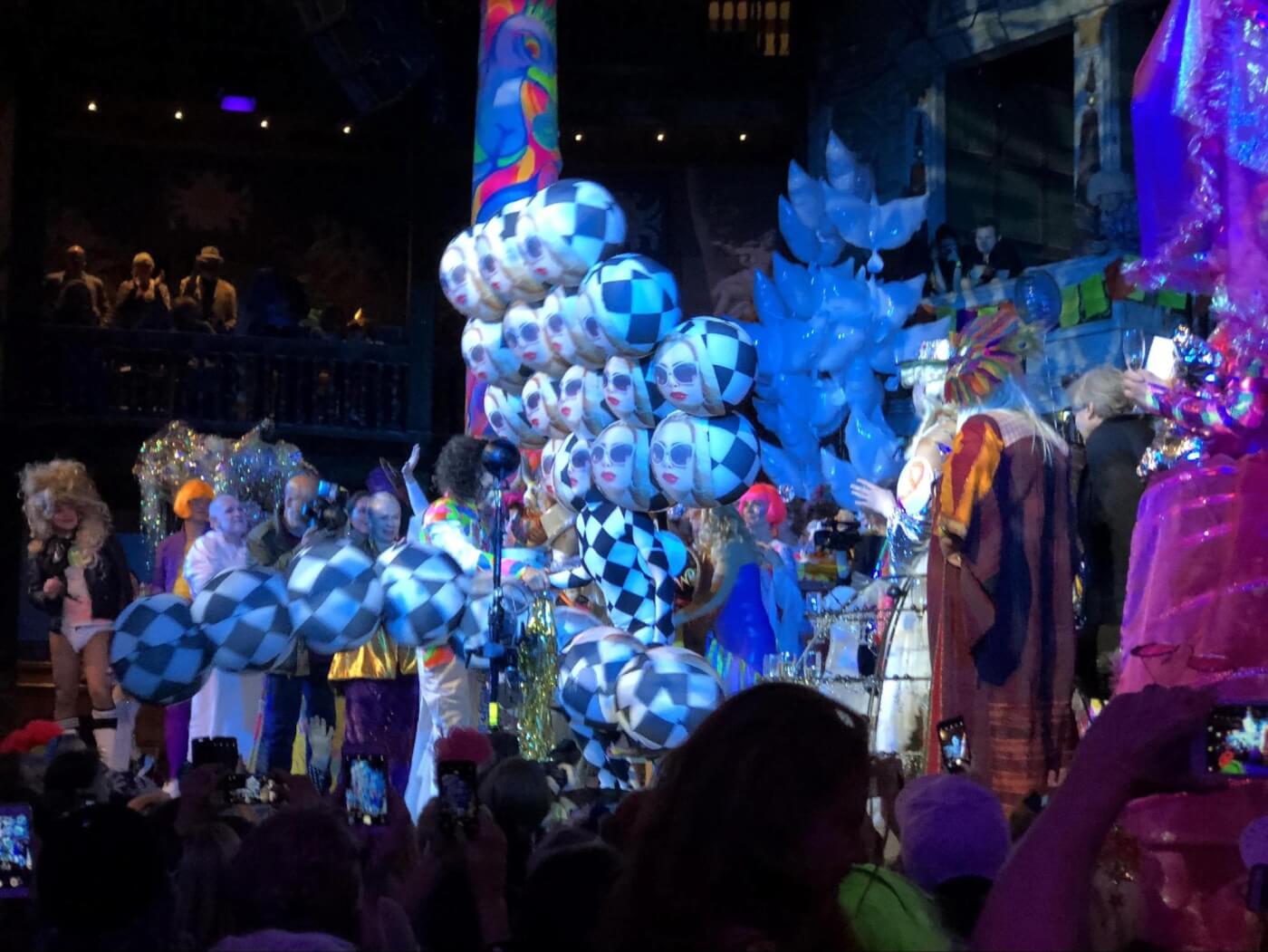 Alternative Miss World remains a much-needed reminder of the need for diversity in a changing world. Indeed, for Logan, Psychedelic Peace is one great big universal Om that transcends division: “It’s all about peace and love for humanity,” Logan says. Long may Alternative Miss World continue in that vein and Logan continue to bring this celebration of expression and transformation to the stage.