Since appearing on the fifth season of RuPaul’s Drag Race in 2013, the Texas queen has toured the world as a fan favorite of the franchise. She became even more popular when she sashayed back into the workroom in 2016 for All Stars 2. This October, Edwards launched her own Netflix docu-series, Dancing Queen, which focuses on her Beyond Belief dance school in Mesquite, Texas.

But just when you think Alyssa — whose real name is Justin Johnson — has done it all, she’s here to surprise us again by adding “camp counselor” to her resume.

Edwards teamed up with TAZO tea to launch an immersive sleepaway camp for adults, where lucky campers will get to spend three days with the drag superstar in an attempt to break out of their comfort zones. 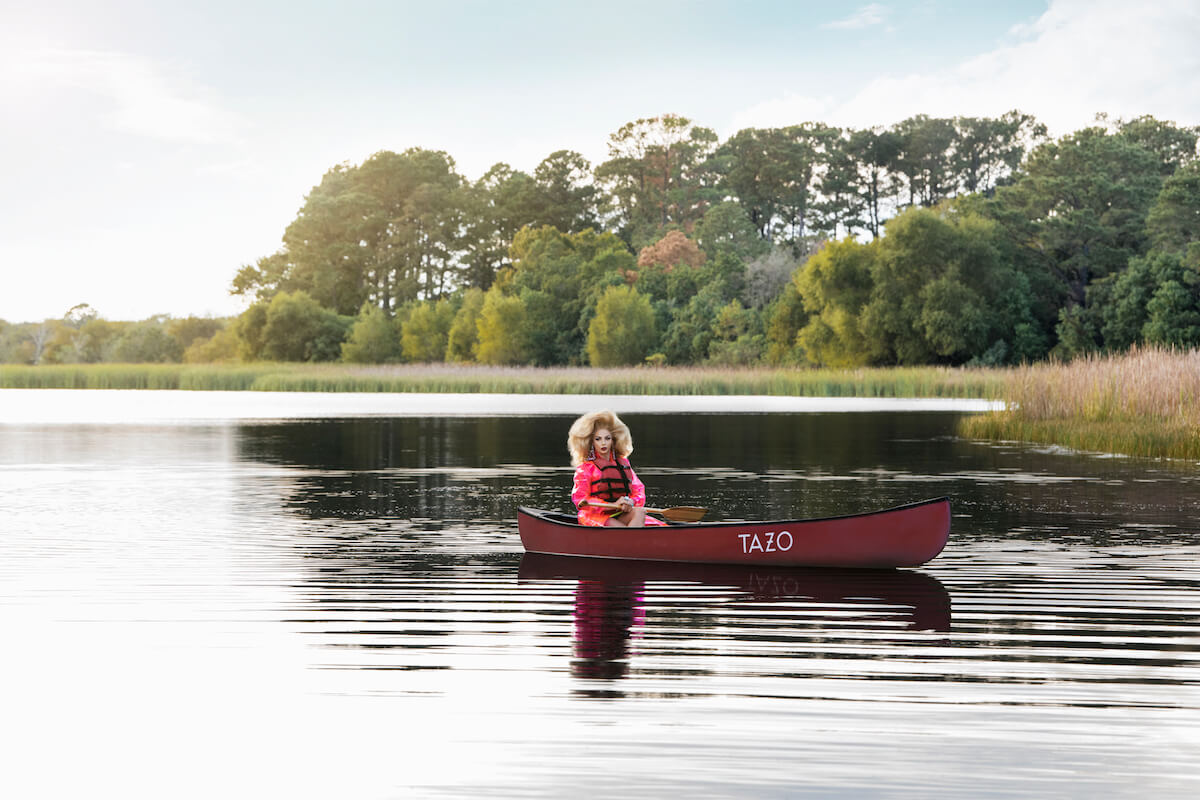 The camp, which Alyssa says was inspired by her love for church camp as a child, will feature a curriculum of activities created by the queen herself that were designed to help people break out of their routines and face their fears.

While shooting promotional photos for Camp TAZO earlier this month, Alyssa told INTO that she found out firsthand just how the experience will help push people out of their comfort zones.

“There’s me canoeing,” said Edwards, “And the whole time in my head I’m like, ‘Oh my gosh, what if this canoe tips over? What if an alligator jumps in the canoe? What if my wig sinks me to the bottom of this lake? What if? What if?’”

“And I reminded myself that’s exactly what this camp is,” Edwards continued. “It’s exactly what drag did for me as a person. So it’s gonna be three days of all Alyssa Edwards-inspired activities.”

One of those proposed activities includes a choreography lesson, which means campers would get a chance to experience what it might be like to be one of Alyssa’s students at Beyond Belief.

“Dance is good for the soul, it’s good for the heart, and it definitely changed my life,” Edwards told INTO. “When I was lost for words as a little boy — it’s hard to believe that I was introverted. I was just really shy. I found my way of communicating through the art of movement in my dance classes. And then let’s fast forward to me putting on the very first wig: every fear, every doubt, every insecurity I had diminished. I felt like I was Batman to Bruce Wayne.”

But she added that not all activities have to be physical in order to help people have new experiences.

Edwards suggested another activity she hopes to see at camp: “Something as simple as sitting around a campfire roasting marshmallows, sharing life stories. I say that’s simple, but if you would have asked me 15 years ago, that would have been very difficult for me. That can be a lesson.”

With an experience that is shaping up to be as inspiring as the Dancing Queen docu-series itself, it begs the question: Could the Netflix cameras show up at the camp to film footage for a possible second season of the show?

“Well,” Edwards said before taking a long pause, “Since you asked, I’m really hoping that possibly I can shoot a section of my upcoming music video. I thought, ‘This is great.’ If the campers wanted to be involved — once again, another activity to get them out of their comfort zone — I would include them.” 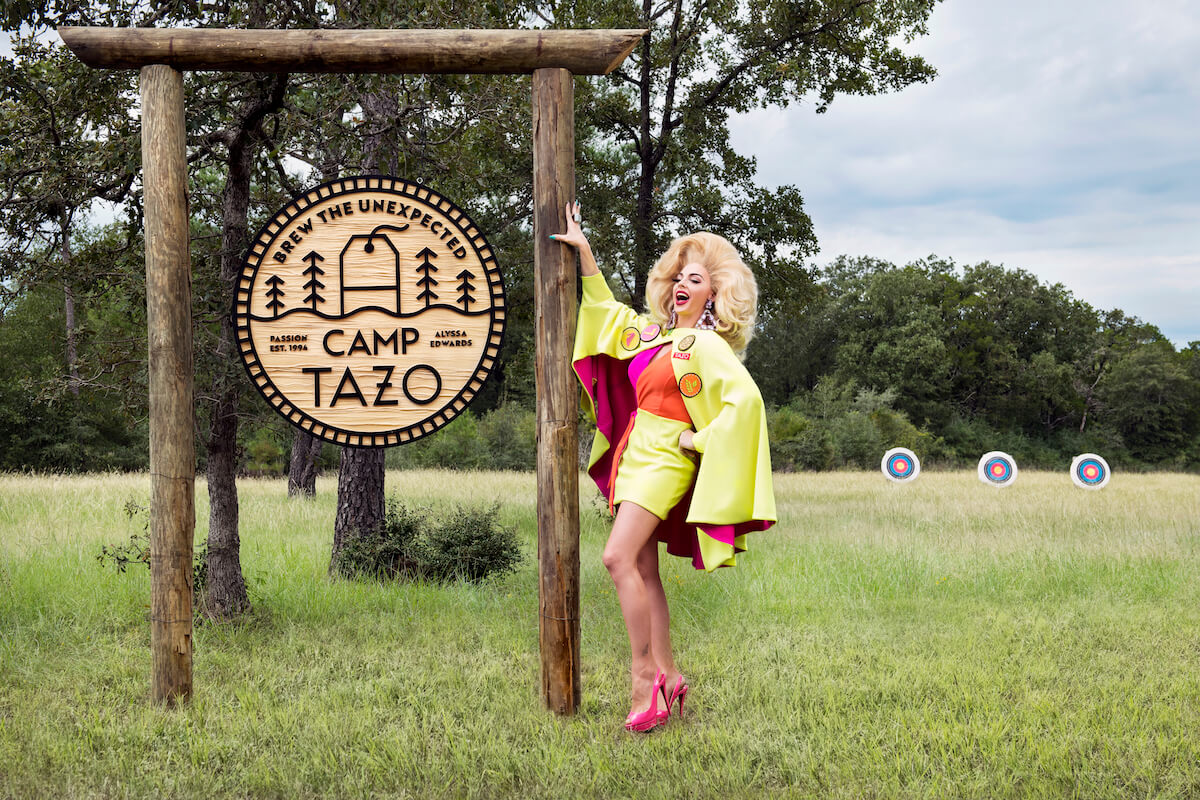 So that’s exciting news for fans hoping to get an album from Alyssa, something she says to look out for in 2019, but it also means she hasn’t heard anything about a second season of Dancing Queen…yet. But while the future of the series may still be up in the air, the success of the show is undeniable.

“The response has been so overwhelmingly positive,” Edwards said. “It’s always nerve-wracking when you shoot something like this that’s so personal. I learned a long time ago, don’t get lost in just reading all the comments. Be proud of what you did. Be proud of the work. Bask in the moment and celebrate the ones who really appreciate it.”

“I think that is something that’s so amazing from all of this,” she added. “People knew of Alyssa Edwards. They’re now being introduced to Justin Johnson. What it is I really do. The man behind the makeup.”

But don’t worry, Drag Race fans. This new chapter of Alyssa’s life doesn’t mean we’ll never see her back on the show that first launched her to this level of fame.

“I would definitely go back on another All Stars,” she revealed. “Why not? I mean, you only live this life once. I will take my drag stuff and go. I will put all my good wigs in my carry-on and I’ll be out the door to have another good ol’ gay heigh-ho time.”

Edwards added: “Here’s my fantasy dream All Star cast: Me, Shangela, Bianca Del Rio … I wanna see Latrice Royale. I wanna see Valentina. I wanna see up on this season: Raven. It would be fun.”

But while her return to Drag Race is just a dream for now, and a second season of Dancing Queen has yet to be announced, fans can get their Alyssa fix by heading to CampTazo.com and registering for the event, scheduled to be held in Austin next year.

“I never pictured myself going camping in full drag, full getup, but I love to camp and I think this is gonna be more than just a camp,” she said. “It’s gonna be motivational. Inspirational. I think it reminded me that my role in life is so much bigger than just being a drag performer.”

“So welcome to Camp TAZO with Alyssa Edwards,” said the queen. “Talk about a dream come true.”