Anyone who is a fan of Ryan Murphy shows (Popular, Nip/Tuck, Glee, Feud, American Horror Story) knows to expect a certain amount of camp, pop culture-infused cynicism and well-trodden television tropes in his workbut they’ve chosen to embrace them, should they keep watching his empire grow. His latest, American Horror Story: Cult, is on the nose on purpose, and offers a similar blend of eye-roll worthy character traits and expected terrors but in Middle AmericaMichigan, to be specific.

For Cult, Murphy (who FYIin case you’ve only recently found your way out of the closet and off YouTubeis openly gay) and co-creator Brad Falchuk decided to center on a wealthy white lesbian couple living in an upscale, seemingly progressive suburb of Detroit. Together, they have an adorkable child they affectionately refer to as Ozzy (after Osbourne, I’m sure) and a restaurant, The Butchery on Main.

The irony is that neither of them is particularly butch (though Alison Pill’s Ivy has a slightly androgynous pixie haircut and a penchant for sportier get-ups), and they’re both vegans. (Just kidding about that last part.) Sarah Paulson’s Ally is the slightly older femmey one, and we learn so much about her when it’s revealed mid-season premiere that she voted for Jill Stein.

Considering Cult begins on Election Night (also the episode’s name), the season is skewing highly political with the Trump v. Clinton campaign kicking off the “horrors.” The franchise has borrowed from reality before, with conversion therapy and cannibalism co-existing with the likes of demons, vampiric children, and other supernatural beings, but Cult is the first to be completely free of anything otherworldly or undead. This time, the terrors are the true desires of the people in your family, across the street, or working at the local grocery store.

Ally and Ivy have a “diverse” group of friends, and they’re all watching the returns together (on MSNBC, natch) in the couple’s massive modern home. Ally is so infuriated and so devastated that she’s crying and crouching down onto the floor for Ivy to come coddle her. (Something viewers will surely become less empathetic about once they realize she threw away her vote to a third party, and Donald Trump won Michigan by less than the 1.07% who clicked the box for inevitable loser Jill Stein.)

Across town, AHS regular Evan Peters is humping his television. This season, he’s Kai Anderson, yet another maniacal loner who is looking for validation from the most abhorrent of placesput a Polo shirt on him, and he’d fit right in at Charlottesville. He sees Trump’s election as his time to shine; as the permission he’s been seeking to throw condoms full of piss at a group of Latino men getting off work, throw hot coffee at lesbos on the street, and revolutionize anyone who will listen, from the city council to his sister, Winter (Billie Lourd).

Speaking of Winter, she’s a thinly-stretched character that highlights how Murphy can work so hard to prove he loves women with final girls usually played by Paulson or Jessica Lange, but that others are subjugated to being influenced by a box of tricks he pulls into and pulls out, placing them on his quirky, lesser fleshed-out characters like personality-less paper dolls. She left Vassar (where she studied English and women’s studies, where it’s still called women’s studies) to work on the Hillary Clinton campaign, but is so distraught by her loss that she gives up all hope and decides to trust her crazy brother Kai, who asks intrusive questions like if there was poop or blood when she first tried anal.

Winter applies to start working as Ally and Ivy’s nanny after their first one just vanished (“either she went back to Guatemala or she was rounded up,” Ally tells her therapist, played by Cheyenne Jackson.) It doesn’t occur to her (or the writers’ room) that maybe the nanny thought it was a bunch of bullshit that a rich white woman who voted for Jill Stein made the election all about her.

But Ally is continuing to go through heightened anxiety, the paralyzing kind that sends her into a frenzy. Because now, not only is she distraught at the idea that Trump is President Elect, but evil clowns are haunting her, playing on her coulrophobia and popping up at the market, her restaurant, or the backseat of her Prius (of course), but mostly just staring at her creepily or fucking in the produce aisle. (For some reason, Murphy insists on inserting overtly hypersexual imagery into American Horror Story, often depicted in a decidedly fucked up way rather than a nuanced exploration of sexual curiosities.)

So when Winter admits to having had a childhood crush on Paula Abdul, I silently hope that for her sake, she’s not, as her brother phrases it so eloquently, “a dyke,” because she’s Kai’s first faithful follower, and I’d hate her to be another sad, predestined for disaster lesbian on this show. It doesn’t seem like Ally and Ivy checked her references, or even heard anything she had to say other than “women’s studies,” so she’s hired! And immediately, she fucks it up by getting the cops called. 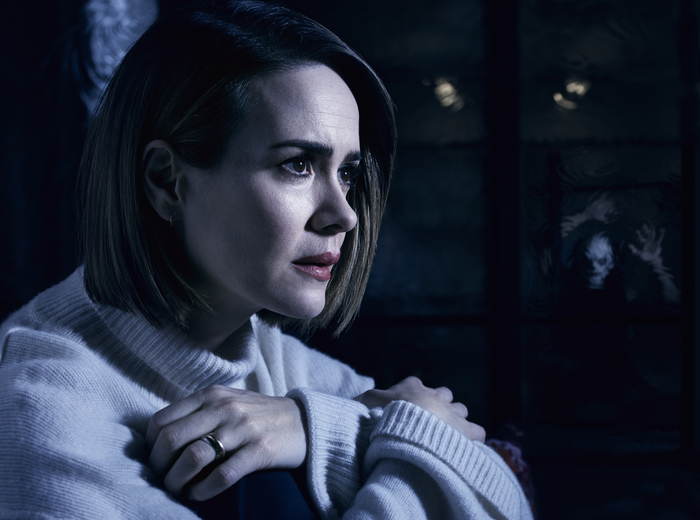 Truthfully, it’s not her faultbut she certainly has something to do with it. The evil clowns pop up on Ally and Ivy’s block, and Ozzy spots them out the window. So Winter (who is a truly awful babysitter and logs onto the dark web to show Ozzy what “a real dead body” looks like) takes Ozzy across the street to peek inside the window of their neighbors, The Changsjust in time to see their throats being cut and torsos being stabbed. The ringleader, who not long ago was riding a razor scooter through the market, wielding a knife and dodging bottles of rose Ally was flinging at him, paints a smiley face on the front door with the late couples’ still fresh blood.

Ally and Ivy arrive home from a botched half work/half date night (wherein the former, who was supposed to be trying her chef wife’s new menu items, swore the spinach soufflé was bleeding out and the carrots were severed fingers) to see ambulances and police tape. They bust through it (duh), screaming about their sonwho is OK. Except, he saw a bunch of evil clowns murdering their neighbors. Winter calls him “imaginative,” a backward compliment they happily accept, and blames his crazy notions on the Twisty The Clown comic book she found in his room. (Fans of AHS know that there are both secret and blatant nods to other seasons and characters in every new offering, and Twisty is of Freak Show infamy, now crossing over just to give Ally a consistent heart attack at the very sight of a painted face and party hat.)

It looks like the Changs are dead and the nameless nanny is missing (have they checked Facebook?), but Ally and Ivy are going through some personal things. Like Ally is acting crazy again so Ivy is getting fed upis she really going to have to be there through this whole “sickness” part of “in sickness and in health”? And Ally doesn’t want to take the “mild” anti-anxiety meds, which her wife likens to wine pairings. At least they have a women’s studies major taking care of their son. (If only they knew, she asked him the exact questions you’re not supposed to ask the child of same-sex parents, like “Which one’s your real mom?” “Where’s your dad? Everybody has one.”)

Essentially, Cult expects us to believe Winter dropped out of a double major at Vassar to ask people to vote for Hillary Clinton, and suddenly became entranced with her racist, homophobic, xenophobic brother who puts his badly-dyed blue-hued hair in a man bun to tell the city council they shouldn’t approve a measure to add more security to the local Jewish community centerthey should blow it up. His equal parts dangerous idiocy and narcissistic tenacity make him a detestable villain, but do we really need to be reminded how tragic it was that not just one, but thousands of white women are willing to follow the deranged proselytizing of a self-congratulatory bigot?

And should she suddenly (at the last possible minute) have a change of heart, will she be the one to save the day? Or will it be Ally, the one who voted for Jill Stein? Which one of them will provide us with the happy ending, saving us all from the terrible reality that is an American Horror Story.

“There is nothing more dangerous in this world than a humiliated man,” Kai ominously offers in this episode. But that’s to imply they had any humility in the first place.