Amy Adler likes to put herself in her art, which means both the gaze and the reflection are inherently feminist and queer. But should the viewer be less clued into who Adler is outside of her portraits and photography, the work might be more reflective of themselves, which is what the artist hoping for with her new series, Hotel.

“Over the past 10 years or so, every time I’ve stayed in a hotel room, I’ve taken a picture,” Adler tells INTO. Based on some of those photographs, Adler created large-scale oil pastel on canvas drawings, now on display at the Susanne Vielmetter Gallery, Adler’s first L.A. show in four years.

“The way I was thinking about it is just sort of transient space,” Adler says of Hotel. “It’s a kind of intimacy that is yours for a moment, and then it quickly becomes someone else’s.” 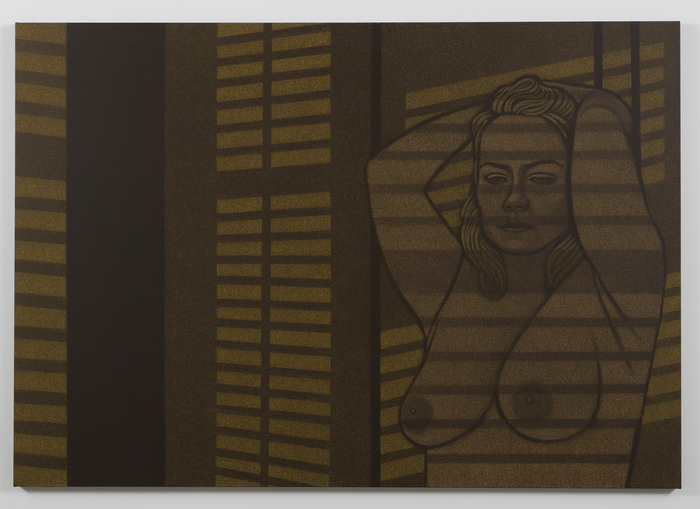 A hotel room lends itself well to Adler’s invitation for viewers to attach their own feelings to a work. For one, she says a canvas or surface for her drawing is a blank space that then transforms into something else entirely. She sees that as a direct parallel to “all the possibilities of what could have happened in that hotel room.”

“What might have happened, what one thinks about happeningthe potential of that sort of space is very rich with possibilities,” Adler says. “And so I didn’t really provide any context for the images along with the show so I think there’s a lot of room to project what might or might now be going on or what the figure might be thinking about. If it’s before something or after something or during something. If there’s somebody else there? These kinds of potential, kind of unanswered questions are very interesting to me.”

Hotel offers six shots of Adler in what are seemingly expressionless posesin a bathtub, hunched forward bedside, holding back her hair in the light coming in through the blinds, seated looking out the window, looking at herself in the mirror, naked on a chair with her leg up on the bed. Each one shares the same subject, of course, but also, the same color palettemuted yellows and warm browns that reveal nothing about the room. Others have referred to it as film noir-esque, and while she does see it as cinematic, she also says her references were more those of early morning light, street lights, low lights.

“It could be a kind of a color that is associated with a certain kind of photography, and kind of maybe a certain kind of time period even; maybe a slightly aged photograph,” she says, committed to the many possibilities one image can have. “I think that complimented the fact that the rooms are also distinctly notit’s not the Mondrian or the Standard. It’s definitely sort of out of this era a little bit, the hotel rooms, so there’s a lot of things about the way I guess photography is shifting and the way the idea of photographing or filming one’s self is shifting away from cameras and into this kind of selfie culture.” 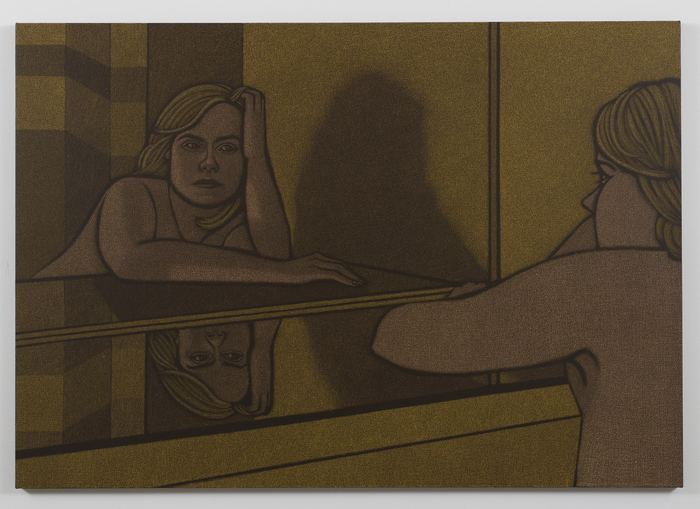 And self-portraits are, of course, the original selfies. Adler has been using herself as a subject for 25 years, in work that has appeared in museums and galleries in Berlin, Tokyo, Milan, Oslo, and New York. She says sees it as a performance, one that is informed by details the viewer isn’t privy to but that inform her art nonetheless.

“I’m stepping into the frame for a reason. And so it’s not so much about me personally as it is about this idea of fitting in the space that the figure is sitting in in the drawing,” she says. “However, it’s of course layered with personal in this kind of personal background that I don’t really make a part of the sort of narratives of the work. So even though it’s performing as something, it always has a kind of back story that’s very personal to me that isn’t really something that I think is important to share.”

In her 1995 work “What Happened To Amy?” a younger Adler is drawn from photographs taken by a stranger. She’s posed in a a similarly expressionless, but the title is perhaps more leading. Still, the question being posed invites the same kind of curiosity from viewers, and allows her to be free of the inherent vulnerability that drawing oneself–especially nude–can bring.

“I really love the idea of this shifting, like if there’s another person in that room, who is that person? And how old are they? And what gender are they? And why are they looking at this other person?” Adler says. “My putting myself in the picture, it allows me to kind of shift the character that’s looking at me, and so I’m not always Amy, 30-year-old or 40-year-old, or now 50-year-old Amy, but I can play different roles. And so I’ve often thought about that as a kind of ventriloquism that’s unique to drawing in a way because it allows me to kind of stand in two places at the same time.” 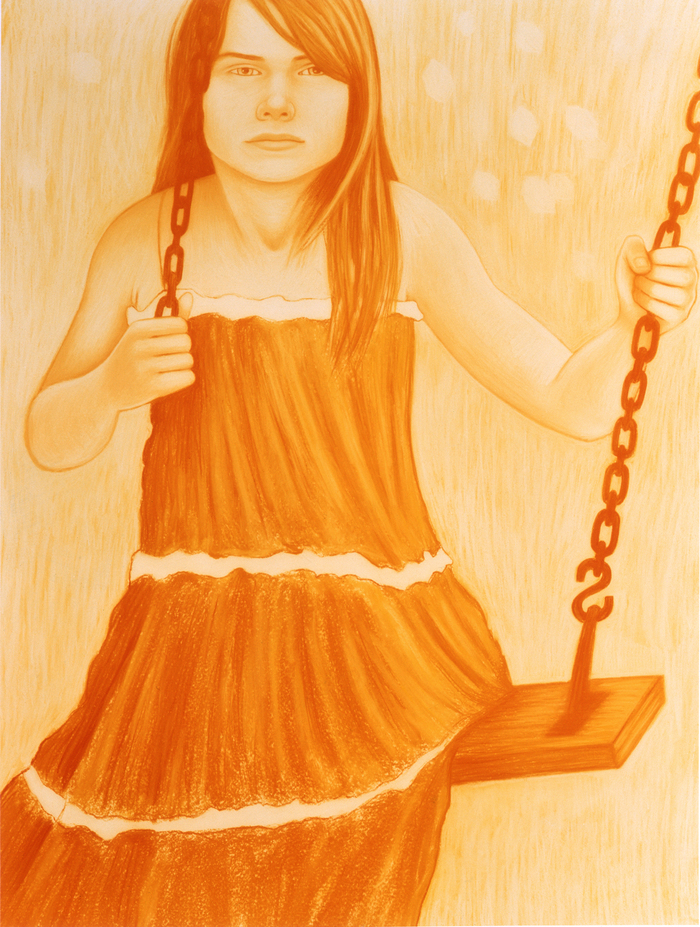 In 2001, Adler’s photo-turned-prints of Leonardo DiCaprio brought attention to her work, as celebrity portraits are wont to do. But her approach to the famously elusive actor wasn’t posed. Instead, DiCaprio appears, in all six drawings, to be mid-thought, mid-conversation–in the moment. What is he talking about? Thinking of? Adler says this series isn’t so different from those that feature herself or other less public figures.

“I was thinking about how characters on screen mirror our own lives, or do our lives mirror the characters we see on screen, and the complications of that blurriness between how identities are formed,” she says. “It doesn’t have to necessarily be limited to one gender. Leonardo DiCaprio was partially cast as this sort of interesting character that could be both someone I identify with or who someone else desires; someone else feels maybe more like a different kind of relationship. But this person is a vehicle for a lot of different kind of shifting desire, and so I think I’ve foregrounded those kinds of questions in my work forever.” 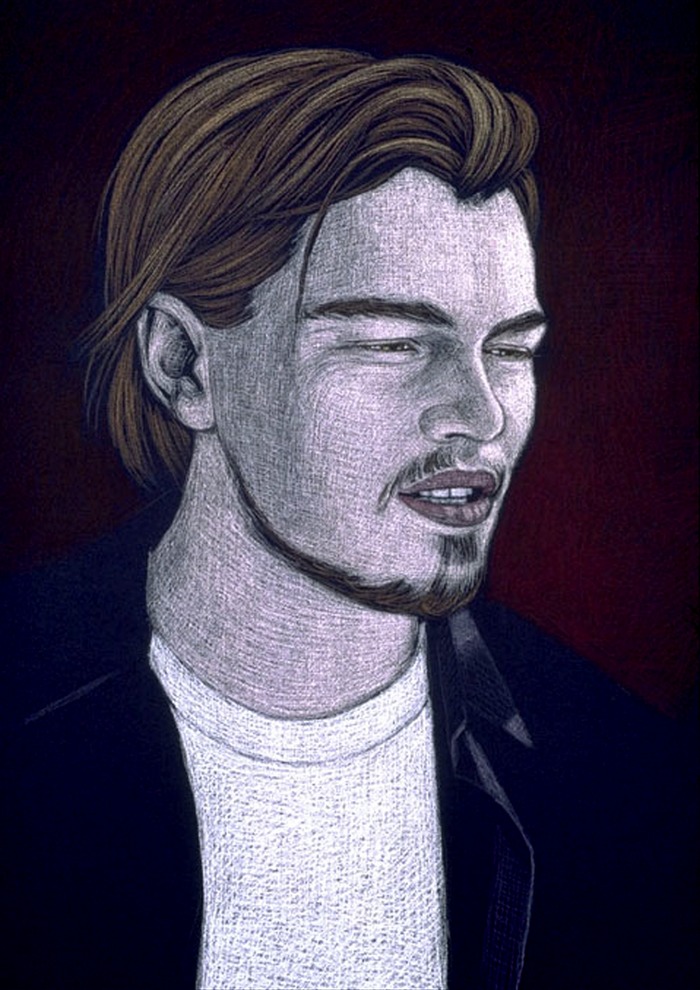 In more recent years, Adler has also been working in film, writing and directing the 2013 family discovery documentary Mein Schloss, and directing the 2016 short festival award-winning Tear Jerker, which followed a man whose mother struggled to recall his transition as she dealt with Alzheimer’s. Currently taking a sabbatical from her work as a professor and vice-chair of the Visual Art Department at the University of California San Diego, she says she’s focusing on her first feature film, and will see more of her visual art in galleries in Norway and Japan.

What excites Adler most, in Hotel and throughout her work in all mediums, is the exploration of desire and projection, and complications therein. Whether she’s in front of and behind the camera or both, she’s shifting the gaze to provide opportunities for the audience to create their own.

“[I like to work on what] I think are complex questions of sexuality and desire and gender, and to put this kind of nude figure out there in this moment of time has a lot of really interesting kind of connections to some things that are going on presently in terms of women’s bodies and questioning the gaze,” Adler says. “What assumptions do we make about the kind of desire that might be going on through those photographs? Is it male? Is it female? To me, I’ve always been interested in how complicated things are, and trying to use the best medium to reflect on that.”

Hotel is currently on view at the Susanne Vielmetter Gallery in Culver City through June 1.