Andrea Gibson‘s spoken word is so affecting, they frequently make their audience cry.

“Sometimes it’s hard for me to look directly at people, and sometimes it’s amazing that it can pull me through a piece that is hard for me to read,” the poet tells INTO. “It’s one of the things that I love about spoken word is that it’s one of the main art forms that asks the performers to have eye contact with the audience throughout. It can be really intense, and then it can really overwhelm me with this feeling of connection, like I know somebody, and get what they are experiencing.”

With six albums, seven books (including Take Me With You, available January 23), and a handful of awards from renowned poetry slam competitions, Gibson is one of spoken word’s most prolific poets. Their national tours are consistently successful, with venues full of devotees; some with Gibson’s quotes tattooed on their bodies, lots of them LGBTQ-identified. (Gibson, who uses they/them/their pronouns, identifies as nonbinary.)

The crying crowds are responding to Gibson’s guttural style; their marriage of personal and political in lyrical storytelling that would elicit an emotional response in the coldest of hearts. The crying, Gibson says, isn’t just for the the crowd.

“I cry so much,” they say. ” And I cry when I am writing, and it just spills out onto everyone. I woke up crying this morning and then it was a great day, and I thought ‘God I should start my day every day with, like, five minutes of crying and see how every day goes.’” 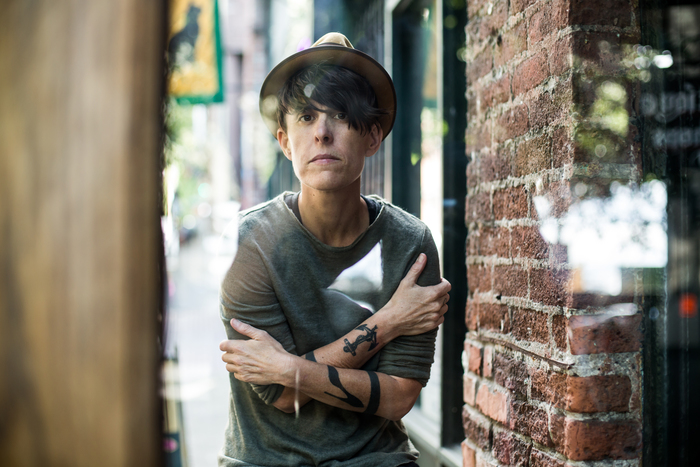 Which isn’t to say that Gibson’s work is all heavy or sad or joyless, but that it’s affecting. Gibson says that the connection they establish with fans is often as freeing as it can be painful, which is to say there are no trigger warnings before performances despite the content including themes of violence, racism, homophobia, and otherwise difficult topics to navigate pertaining to identity and general personhood.

“Sometimes something that is resonating is something really joyful for somebody,” Gibson says, “and then something else, you know, might be a piece about sexual assault. And to watch that resonate with so many people in the audience is intense.”

Gibson says they believe in finding comfort through the sharing of even the most harrowing and tragic of experiences.

“It always feels nurturing to me to have that experience,” they said. “Not that I am wishing negative experiences on anybody, but it definitely feels like a place of feeling and in some ways just to be talking about something and to know you are not the only one that has experienced it.”

On their new album Hey Galaxy, Gibson isn’t afraid to touch the third-rail. In a piece titled “Letter to White Queers,” Gibson asks their audience, which inevitably includes a bevy of white queers like themself, to question their culpability in a perpetually racist society. The poem, Gibson says, was inspired by the reactions some of their fans were having to Facebook posts the poet made in support of Black Lives Matter and subsequent social actions to hold law enforcement accountable for their actions that resulted in the needless deaths of Black people.

“One of the first times I read it,” Gibson says, “I was reading it near St. Louis and there was a police officer from Ferguson at the show who asked me to come on a ride with her and spend a day with her in the patrol car, so I could get a more ‘well-rounded’ perspective. And I said no.”

Gibson says performing poems like “A Letter to White Queers” can prove difficult in some spaces more than others. One of the “main issues” they have with the piece, they say, is that “depending on how I might read it, I sort of lean in the direction of it being riddled with white guilt that I don’t find ultimately helpful.”

“Sometimes I can’t read it because I am having moments of, ‘Okay, so I’m going to read this piece, but how am I not taking this moment to call out the white supremacy of the president of the U.S?’ Like I am addressing the community specifically in it,” they said. “And that’s also hard when I am reading in a space that I feel like is occupied by a lot of straight people, and then to read a piece unpacking the racism of white queer people and in that space sometimes will feel tricky to me. But generally, I read the piece and am just open to discussion afterward. I learn a lot from talking to people after shows about the pieces I have written and have changed a lot of lines and deleted whole poems from my set because of conversations I have with people.”

Gibson isn’t afraid to self-edit, even after having published, recorded, and performed pieces for years, which creates an ongoing revision process based on their own evolution.

“I have even had pieces that I may have written two to three years ago that I can look back and think ‘God, that is so ablest or racist or that’s maybe homophobic,'” they said. “I just didn’t know enough at the time to have written something, so I have actually gone back and deleted them from albums online and reprinted the album without those tracks on there. I am changing things constantly. There are for sure things that after the album came out, I thought ‘God, I don’t like how that sounds.’” 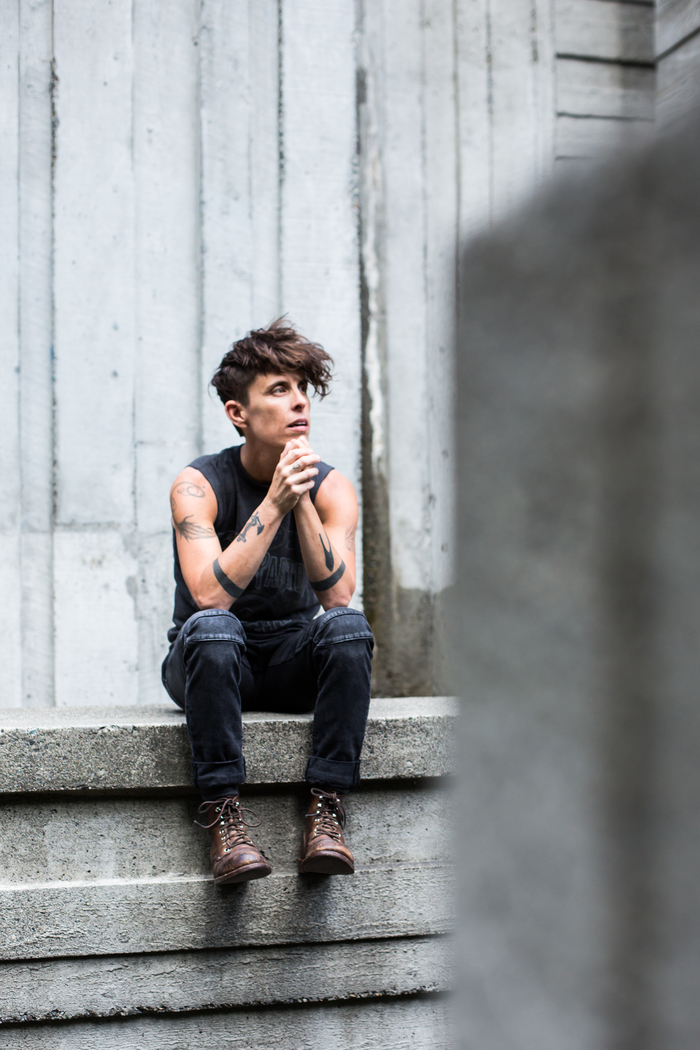 In modern America, where callout culture has become the norm, Gibson says they aren’t afraid of being called on something that others might find hurtful or offensive.

“It’s just something you have to go in and dive in and say, ‘If I’m going to be an artist these days, and I’m going to have any sort of political message, or if I am invested in writing things that might be of service to the world, I have to recognize that I am learning at the pace that I am learning at, and there are people who are learning faster than I am, and so there are people who are going to catch somethings that might be harmful to people,'” Gibson says. “And just to have a constant willingness to be wrong.”

Gibson finds a refusal to listen to others’ constructive criticism as limiting to creation, which inevitably requires audience response.

“It’s part of the process of being an artist and being a learner,” they say, “and also being willing to listen to people and know you are going to mess up and just try to mess up with grace and try to learn as fast as you can.”

Hey Galaxy includes another poem, “Orlando,” that might elicit more tears from a queer and allied audience as they embark on their winter/spring tour. An ode to the 49 who lost their lives at Pulse, and the community who has suffered in their wake, Gibson says it took them some time to be able to formulate the thoughts and emotions that turned into an impassioned plea for humanity.

“It varies for me, depending on where my mental health is at the moment, and if I am in a place where writing is actually helping,” Gibson says. The election, they say, made creating more difficult.

“I went into this place of political despair that I don’t think I have ever personally experienced in my life, and so it took me a long time to actually start writing piece,” Gibson says. “I was writing maybe what you would call think pieces on social media, but I couldn’t get myself to try to write poems about it for quite a while because I couldn’t even stomach the idea. I think art is beautiful even if its gut-wrenching, but I couldn’t even grapple at that time with what I was feeling inside.”

Those feelings forever affected the mood and theme of Hey Galaxy, which was intended to be more about love, Gibson says, until the election. But inevitably, they wrote toward the hope they wanted to have, and to give others. They cling to the quote “Art should comfort the disturbed and disturb the comfortable” as a guiding force.

‘”I want to comfort the people that need to be comforted, and I want it to disturb the people who need to be disturbed,” Gibson says. “That’s what I was thinking throughout. I wanted it to be a balance of truths that are maybe harder for us to look at but also sprinkling some kind of positivity or hope throughout.” 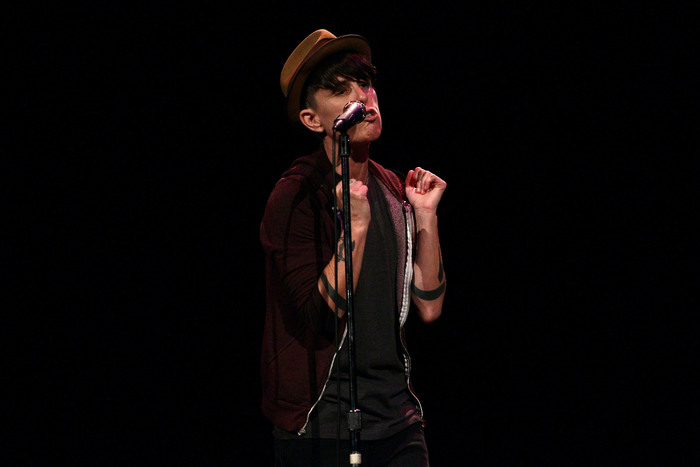 And while they struggled to find their own hope in 2017, Gibson says they have created a space for themselves and others to remain optimistic about a reimagined futureone that is inherently more political and progressive because it has to be.

Those who see Gibson on tour or take a listen to Hey Galaxy could instead leave with tear-stained cheeks, inspired by empathy, nostaligia, sadness, or maybe even joy. But largely, it will be because they feel seen and heard and beautifully articulated. And should they find something problematic or worth talking to Gibson about, they’re just happy to have started the conversation.

“I think a lot of what spoken word does intends to make people uncomfortable with its emotion and its sort of a brutal truth in a way,” Gibson says, ” so I think sometimes it’s not for everyone. But I have seen it positively grow, and also have watched it impact what we think about the world. It’s certainly changed my politics just listening to poetry and learning through that process.”

“Hey Galaxy” is available now. The Hey Galaxy Tour kicks off on January 14 in Detroit.