This week, Nickelodeon threw their hat into reboot-mania and announced that Rugrats is coming back in a major way–the hit ’90s cartoon is getting 26 new episodes and a major motion picture, which will feature all our old favorite characters, plus some new blood. And while that sounds super exciting for people who are four, us ’90s kids only want nostalgia.

So while I don’t care much for new episodes or new characters, I absolutely do care about rehashing past characters–like queen Angelica Pickles. I think it’s high time we had a dialogue about Angelica, the volatile villain of Rugrats, who is indisputably a lesbian icon. 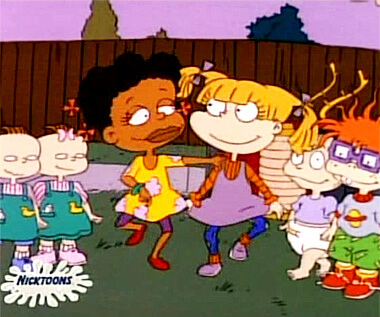 I am henceforth declaring that Angelica is canonically gay. Allow me to explain. The three-year-old evil cousin of lead baby, Tommy Pickles, possessed all of the most basic characteristics of a queer woman: she’s moody, pushy, and bossy, and says things like, “I know,” “get real,” and “you’re disgusting.” Angelica fancies herself the smartest and most important woman in the room, and carries the confidence of 1,000 Queen Latifahs in Set It Off–which, if you’ve ever been on a Supergirl Tumblr thread, you know is also true for lesbians.

Angelica is into herself in a way that only a queer woman could understand. “Sometimes I wish I could be you, just so I could be friends with me,” she once quipped. As an out lesbian, many (idiotic) people have asked me for years, “So if you’re gay, does that mean you’re attracted to yourself?” After much rebuttal and pushback on this moronic, reductive comment, I eventually realized–of course I’m fucking attracted to myself. 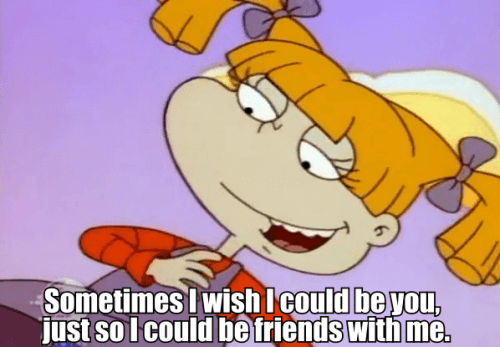 Sometimes, on a rare but powerful good-body-day, I’ll ogle my naked self in the mirror and just admire myself–a quality I definitely learned from Angelica’s bull-headed body positivity. She’s not necessarily narcissistic in a superficial or materialistic way, but she knows her worth, because she knows how dope women are–and nobody appreciates women like girls who date girls.

Angelica reeks of early queerness. Many of the traits and interests that made me me as a kid are things I can look back on today and realize, “Oh, that was super gay.” Angelica is obsessed with her now-infamous Cynthia, a decrepit Barbie doll that she carries with her everywhere. I used to think that Cynthia was a partly-scalped doll with only half a ‘do, but now I realize Cynthia actually had a butch side shave–on both sides. Cynthia was a gender-bending, dress-wearing butch queen, and Angelica loved her. Plus, Angelica always projected her own emotional turmoil on to Cynthia–which I’ve definitely done to a romantic partner–and maybe I’m reaching now, but look we all had a doll that we cared about a little too fucking much.

Angelica is petty, she’s intimidating, she’s jealous, she loves revenge, she loves having enemies… Angelica craves tumult in ways that I’ve seen many-a-toxic queer woman mirror. Of course, all of her negative qualities are a reflection of her own insecurities, combined with the possibility that she’s harboring one mega-secret–and for that reason, I wholly identify with Angelica. She was the very first portrayal of unhinged, hormonal, adolescent queerness that I ever witnessed on-screen. The only Rugrat more canonically lesbian than Angelica is Chuckie, who is bogged down by social anxieties and allergies (which like, same). 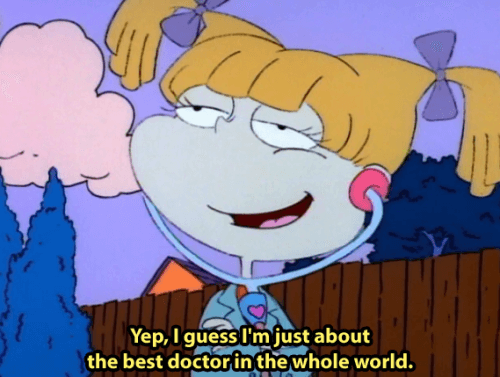 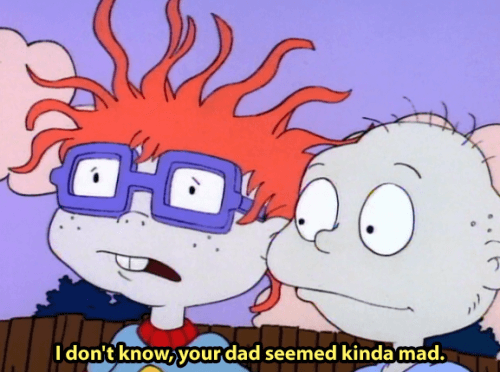 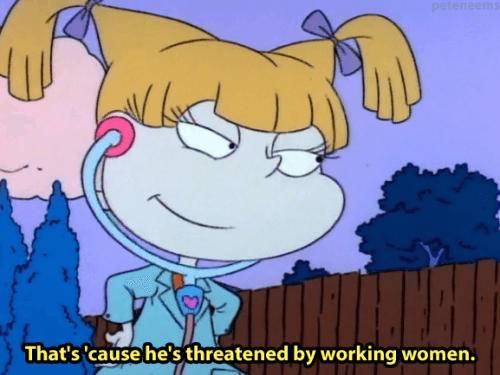 All I’m saying is: there’s a reason I grew up wanting to wear purple, clashing patterns, pigtails, and overalls. And it’s because both Angelica and I are both canonically gay.