Whether you call him by his real name or only refer to him now as “Oliver,” Armie Hammer and his short shorts struck a chord with the gay community in Call Me By Your Name last year, inspiring a thousand dorky dance memes and a newfound obsession with fruit which has redefined everything that the peach emoji stands for.

However, this isn’t the first time that Hammer has played a friend of Dorothy on screen.

Back in 2011, the walking thirst trap starred as Clyde Tolson in Clint Eastwood’s J. Edgar, sharing a brief kiss with Leonardo DiCaprio, and it’s fair to say that both The Lone Ranger and The Man from U.N.C.L.E. included their fair share of homoerotic moments too. Of course, each of these films were released in the dark times that we now refer to as BCMBYN (“Before Call Me By Your Name”), so why is it that a brand new gay role for Armie Hammer is being overlooked now in 2018? 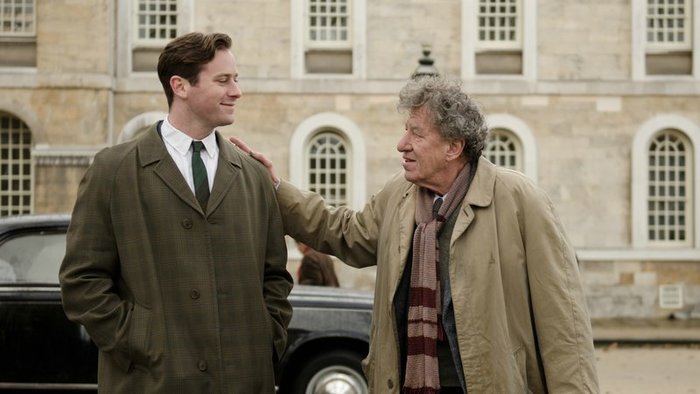 Put Your Trust In The Lord

Much like Call Me By Your Name, Final Portrait also revolves around an intense relationship shared between two men from different generations, but here, the affection that they share for one another is strictly platonic. In Paris, 1964, American art critic James Lord (Hammer) visits the painter Alberto Giacometti (Geoffrey Rush) in Paris and agrees to sit for a portrait. At first, Hammer’s character is bemused by his friend’s temperament, but is soon perplexed by his refusal to complete the painting.

Geoffrey Rush’s portrayal of the chaotic painter draws focus throughout Final Portrait, yet it’s Hammer’s performance in the role of Lord that anchors the story, grounding us in ways far more relatable than Giacometti’s love of brothels and adultery. In Call Me By Your Name, Oliver’s brash confidence belied the depths of his vulnerability, but here, Hammer exudes an elegant, almost zen-like calm that still hints at the frustration which builds under his preppie exterior as the film progresses.

In real life, James Lord was famous for writing the memoirs of famous artists, one of which was called Giacometti: A Biography, and now forms the basis of Final Portrait. Openly gay in his later years, Lord was initially forced to hide his homosexuality while serving in the United States Army during World War II. After his death in 2009, an unpublished memoir was released posthumously that detailed many of Lord’s sexual encounters during wartime. Titled My Queer War, the book is a stark reminder of Lord’s legacy as a queer pioneer, but director and writer Stanley Tucci kept this out of Final Portrait for the most part, instead focusing his admiration almost entirely on Lord’s friend, Giacometti. 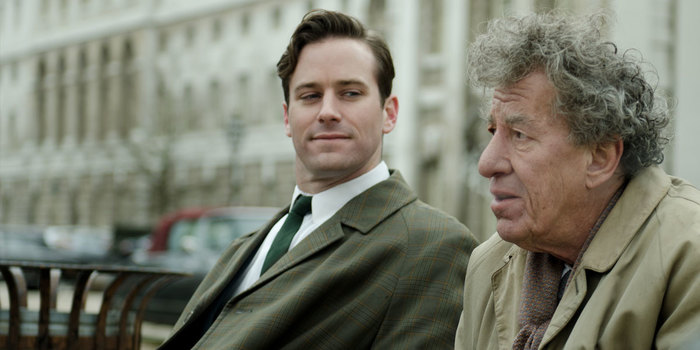 Call Me By No Name

Although Hammer’s performance in Call Me By Your Name was snubbed by the Oscars, nominations at both the Golden Globes and Critics’ Choice awards still marked a new chapter in his career. In spite of this though, hype for the star’s second gay part in a row remains nearly non-existent, and this might have something to do with the niche subject matter of Final Portrait. Despite scoring a decent 78% on Rotten Tomatoes, Tucci’s fifth directorial effort is hardly a mainstream affair and the relative lack of promotion will relegate the film to a limited arthouse schedule when it hits cinemas on March 23.

However, these factors haven’t stopped other movies starring LGBT characters draw attention from the gay community, including the likes of Beach Rats and The Wound over the last 12 months alone. No, the real reason why Final Portrait hasn’t built a following from queer audiences is because the film sidelines Lord’s sexuality to almost the point of non-existence. Some audiences might bemoan the lack of explicit sex in Call Me By Your Name or the way that it was briefly marketed as a straight romance, but at least the romance is there in the final product.

In Final Portrait, Lord continues to postpone his journey back to New York so that Giacometti can finish his painting, and as the film unfolds, it becomes clear that an unseen boyfriend waits at home for him with increasing impatience. However, by the time that the credits roll, we’ve still learned next to nothing about this mysterious figure aside from the fact that he exists. Sure, the core themes of Final Portrait revolve around artistic struggle and the platonic friendship shared between Lord and Giacometti, but erasing the author’s sexuality is still a major misstep. 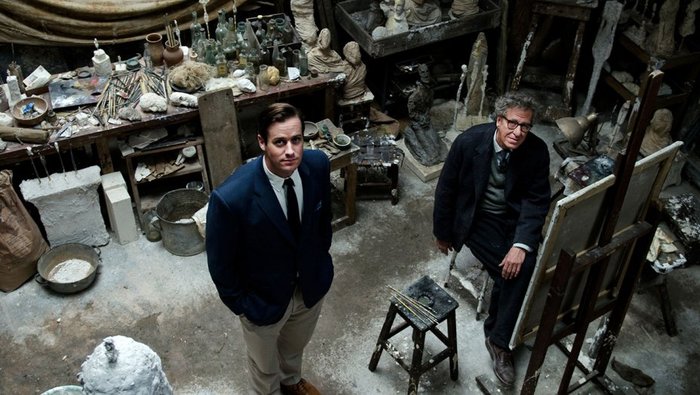 The closest that Final Portrait’s depiction of Lord ever comes to satisfying gay audiences is merely on a superficial level when the critic decides to take a swim. Tucci’s lens curiously parallels Call Me By Your Name here by focusing on Hammer’s naked torso with lingering adoration. Aside from this though, his character remains sexless throughout. In contrast, Giacometti’s sexual proclivity becomes a key plot point as Rush’s character swings between his neglected wife (Sylvie Testud) and the insatiable lust he holds for a prostitute named Caroline (Clémence Poésy).

Final Portrait was always intended to focus more on Lord’s desire to leave Giacometti’s studio than his own physical desires, and because of this, it’s easy to see why the film was never marketed to queer audiences. However, further acknowledgement of Lord’s sexuality could have been a respectful way to mark his legacy as an openly gay writer without detracting from his relationship with Giacometti.

On its own merits, Final Portrait is a charming story of friendship that dives deep into the creative process of painting. Unfortunately though, Hammer’s latest film also feels like a missed opportunity that paints over Lord’s truth with the broadest of brush strokes and because of that, it’s not hard to see why queer audiences have ignored the release of Final Portrait for the most part.