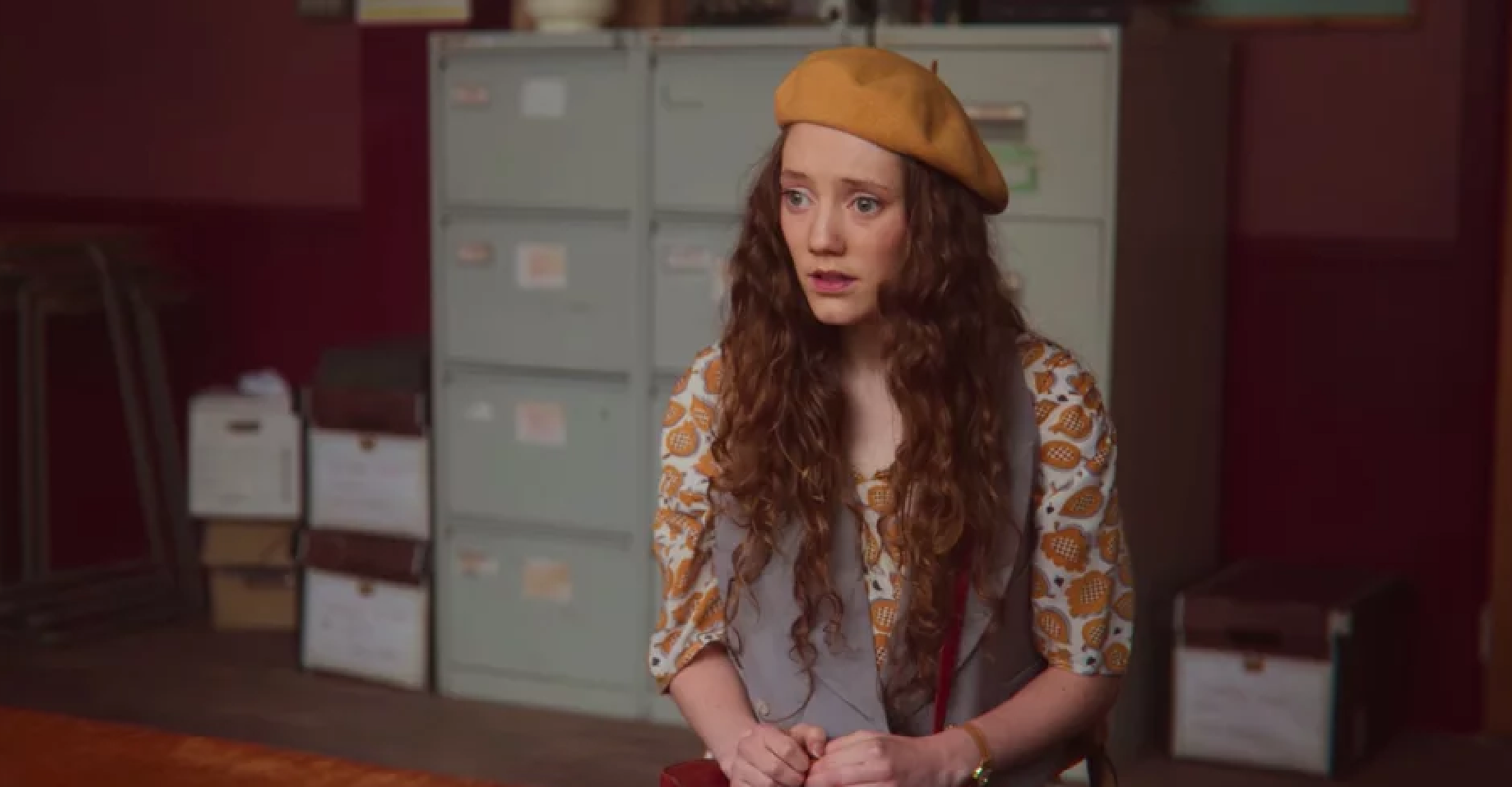 Steve Morley’s sign struck me. “I think I’m demisexual,” it read in black, all-caps lettering on a string around the muscular neck of the blond, curly-haired Moordale student. He stood in the auditorium in a sea of his peers, all also wearing supposedly shameful signs and dancing as the school choir belted out an epic cover of Peaches’ epic “Fuck the Pain Away.” Steve’s (Chris Jenks) sign was less attention-grabbing than “I love a finger up the bum!” Less funny than “My mom caught me wanking.” But the fleeting moment in Season 3 of Netflix’s Sex Education was more important than it might have seemed.

Demisexuality, an orientation that falls under the asexual (or “ace” umbrella), is not one often portrayed on TV. In a hypersexualized world, all ace identities are overlooked on screen. Aces experience, to varying degrees, the lack of desire to have sex (distinct from abstinence and celibacy); demisexual people typically need a strong emotional connection to feel sexually attracted to others. We’re all hurting for adequate pop culture representation.

With Steve’s sign—which is never discussed—and an even more minor asexual character named Florence (Mirren Mack), who appears in one Season 2 episode, Sex Education has dipped a toe into the space vacated by Freeform’s Shadowhunters and Netflix’s BoJack Horseman in 2019 and 2020, respectively. With the absence of prominent characters like Raphael Santiago (David Castro) and Todd Chavez (Aaron Paul), in one season the only ace character on screen, according to GLAAD, it’s been back to square one for viewers. We’re left reading tea leaves to determine which characters might be ace and latching on to tiny crumbs of representation wherever we can get them, like in Sex Education or High Maintenance.

It’s hard to feel full off those crumbs, especially when Florence didn’t return in the new season of Sex Education, which typically shines in converting seemingly minor characters into series regulars in an expansive, diverse cast. But in Season 2, the lead in the school’s space-age, kinky Romeo and Juliet, Florence feels pressure from her friends because she’s not sexually attracted to anyone at Moordale, where people are basically always going at it. “I don’t want to have sex at all,” she tells a professional sex therapist after advice from her peer, protagonist Otis Milburn (Asa Butterfield) was dismissive. “Ever. With anyone. I think I might be broken.” That feeling is familiar among many ace people starting to come to terms with their identity. After defining asexuality (and assuring her that some aces still want romantic connections), the therapist, Jean, who also happens to be Otis’s mother, counters, “Sex doesn’t make us whole, and so how could you ever be broken?” It’s a beautiful, true sentiment.

We’re left reading tea leaves to determine which characters might be ace and latching on to tiny crumbs of representation wherever we can get them, like in Sex Education or High Maintenance.

Steve’s sign and Florence’s brief arc, lovely as it was, are consolation prizes: They’re a far cry from the regular representation BoJack in particular offered—albeit in goofy, cartoon form—and from what ace viewers were hoping for from the series, which many initially thought was hinting that Otis himself falls under the ace umbrella. Who’s a more perfect foil for a sex therapist mother than a mediocre-sex-advice-dispensing son who doesn’t himself desire sex? It’s still possible he’s ace, though the show has not—and might never—explored the option, instead leaning further and further into Otis’s sex life, to the point where he even has a recurring casual hookup pal in Season 3.

There is one show this year with a prominent asexual character: Freeform’s Everything’s Gonna Be Okay features Drea, a homoromantic, autistic asexual woman. Meanwhile, characters like Florence, High Maintenance’s Evan Waxman (Avery Monsen), and Todd have a little too much in common besides being ace: They’re all white, cisgender, non-disabled, alloromantic (interested in forming romantic relationships), and, so far as we know, heteroromantic. Asexuality, as Sara Ghaleb put it for Vox in 2018, is not “heterosexuality-lite,” and it does diverse ace communities a huge disadvantage to portray it as such.

Aside from explicitly labeled characters to savor, fans can scour headcanon and creators’ interviews to figure out who might be ace. Steven Universe storyboard artist Maya Petersen said in 2020, only after the Cartoon Network show stopped airing, that Peridot is asexual. There are other characters aces may relate to—like The Big Bang Theory’s Sheldon Cooper (Jim Parsons) or even the titular murderer in Dexter (Michael C. Hall), but they aren’t sure things, and those characters are (obviously) very flawed. Riverdale squandered an opportunity to make Jughead ace, as he was revealed to be in the Archie comics. These are slim pickings.

Better, more consistent and more overt representation will hopefully come in time. As I’ve written before, TV writers have to walk before they can run in terms of learning ace vocabulary and teaching it to viewers, hence the danger of bordering on didacticism that shows like Sex Education, Everything’s Gonna Be Okay, High Maintenance, and even BoJack have faced. As BoJack creator Raphael Bob-Waksberg put it to me for Bustle in 2018, “I would love it if like, 10 years from now, people look back at BoJack and watch some of our asexual episodes that describe what asexuality is and how it works and the different kinds of asexuals and go, ‘Duh. This is so boring. Everyone knows this stuff.’”

For everyone to eventually know this stuff, though, Sex Education and other shows will have to keep telling ace stories and building upon the foundation that BoJack and Shadowhunters laid down. Season 4, which has already been greenlit, may explore Steve’s demisexuality. Florence may make a return. But aces shouldn’t have to beg for our stories to be told and then act grateful for the scraps and signs we’re handed.♦