I’m in a graffiti-splattered concrete skate bowl near the Tottenham Marshes. It’s hot. The music is like seagulls amplified into static insanity. The carnival punks have taken over, and queercore band Poisonous Cunt is in full effect, but all I can see is the slumped over punk puking next to himself.

“Will nobody help him?” I ask the wind. I drop over and leave my bottle of water next to him. Nobody notices. A minute later, a second male slumps down, partied out, and vomits in solidarity onto the concrete. I place the bottle halfway between them.

I haven’t slept. I can’t remember how I ended up here. I sit on the edge and stare at the two paralytic punks. I feel all right about it.

The band cuts out, and the assembled sticky crew roar with drunken encouragement. My pair of puking princesses pop more punk-purge on to the floor. The grand finale. I slide off the precipice like pasta down the edge of a toilet bowl.

As I reach the bottom, I realize the skatepark is livewire electric with skateboarders slicing back and forth like hummingbirds. One of them is singing, their voice falsetto above the grinding of wheel on concrete.

“We are the grandchildren of the witches you failed to burn …”

Maybe it’s the heat. Maybe the Poisonous Cunt. I am paralyzed, caught between the flashing pulses of color and laughter whipping past me on all sides like frights on a fairground ride. I tighten into a protective knot, ready to be rumbled, when one phantasm grinds to a halt before me and reaches out a hand.

I look up, and atop a harlequin medley of polychromatic chiaroscuro is the beaming face of Yaya Bones. 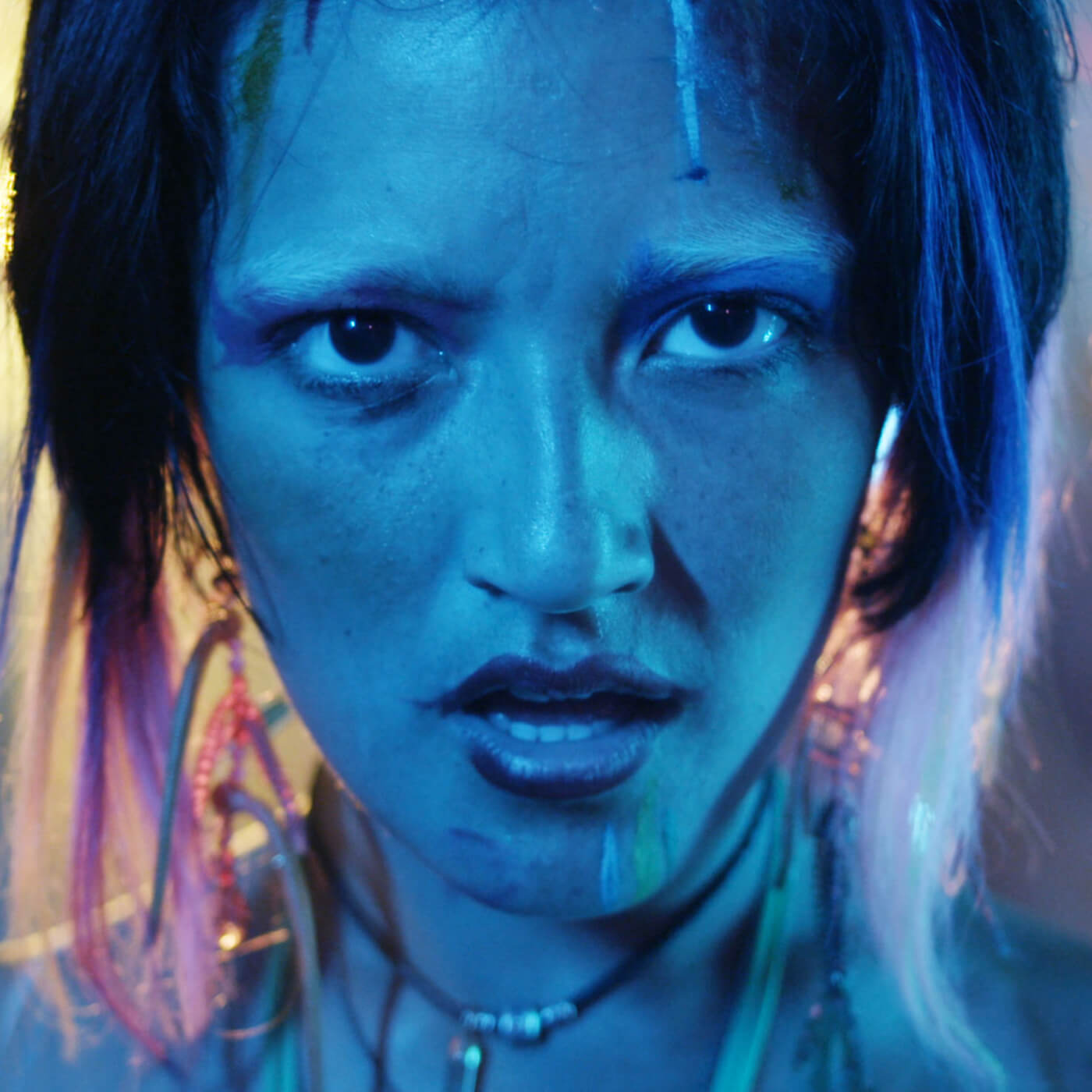 They smile. “You know I speak Mandarin not Bahasa. Come on, get up.”

Yaya Bones (nee Ayesha Tan-Jones), community organizer and nonbinary witch, scrapes me off the bowl and toward the ragged bursts of plants breaking through the asphalt towards the sunlight, growing, even when the humans stamping drunkenly around seek to destroy them.

“Herbal magic flourishing through the cracks,” they say, picking a piece of mugwort from between the shattered asphalt and crushing it between their fingers. They let me smell it. It smells how I imagine someone who has been hunting in a forest by moonlight smells.

“What were you singing?”

They repeat the line, clapping their hands along to punctuate their explanation.

“During the European witch craze, witches were often people who were seen to be a threat to the new capitalist/Christian conformity. They were the village healers who used nature as their remedies, the young vivacious creature with sexual positivity, the elders with wisdom and a hunger for the old ways. They were people who were cast out of the society for their ways of life. They are our ancestors. Being queer, we are rejecting society’s stereotypes and expectations.”

“In the west,” they continue, “the reclaiming of the witch is empowering many womxn, queer folk, and other siblings. Our beliefs can be practiced and celebrated. But there are other parts of the world that still today women are being killed, burned or stoned for heresy and suspected witchcraft practices.”

They spill all that and then casually roll across the bowl and cruise around physics as if composed of mercury. Between the effortless rolls of other members of their genderfluid coven, they pop up on the opposite ledge and then cruise right back.

“What do you call your kind of music?”

“Dream and bass.  Drum and bass to ecclesiastic chanting, lo-fi experimental electronic circuit bent noise to operatic baroque laments, hyper candy pop to punk plus to infinity…. The music that forms from this amalgamation of sounds is dream and bass. its the soundtrack to my dreams, it is grounded, political, ethereal, ephemeral, genre-less, gender-less, and pretty much changes its own definition with each new song created.”

“I feel like I am an archaeologist from the future, uncovering and revealing the remnants of the dead Anthropocene. Psychic excavation,” Ayesha says. “I see my whole craft as sculptural sound, space and material – organic material like tree branches, moss, leaves, and synthetic objects, often obsolete electronics, metals, and other trash. ”

They look out over the bowl of soaring skaters, a balletic waltz transposed against the frenetic jig of the moshpit behind. A shadow darkens their face. They brush their fingers through a burst of dandelion. 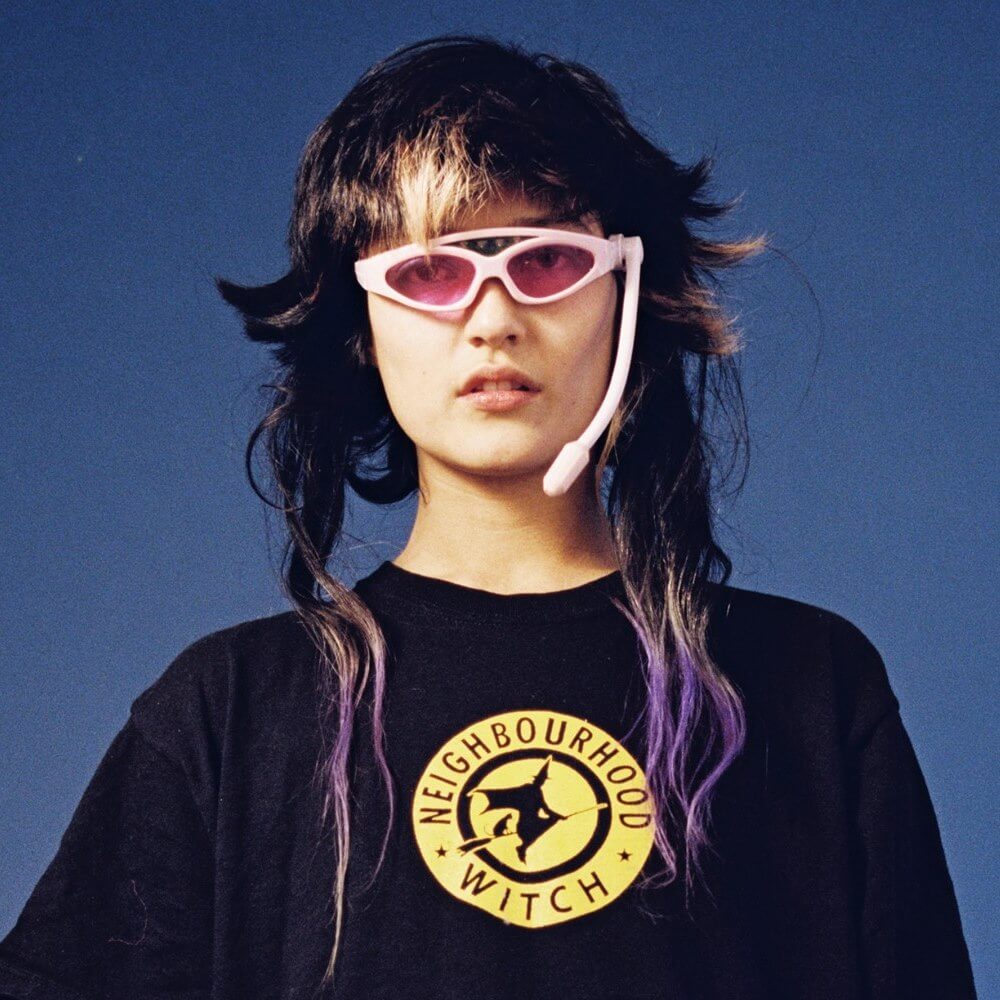 “The hands that dig out the rare earth minerals for our iPhones and computers are the hands of child laborers. The pollution from China’s electronic factories have created a toxic lake in inner Mongolia.”

I feel weird. I start to feel like I am tripping. They spot my eyes going crossed and forgive it with a smile.

As I look at them, they transmute, shapeshifting between glamours, from Una Jynxx, 16-year-old mystic blogger turned electronic conspiracy theorist, to Indigo Zoom, the genderless skateboarding eco-warrior in a world with no clean air, the psychic archeologist, and back into YaYa Bones.

“You’re like Bowie on a skateboard. But less of a dick.”

All at once things happen, so that all I am left with is a final image, an echo of the phenomena that preceded it, impressed upon the eyelids, and a faint doubt in the reality of what is happening. A wildly thrashing punk shrieking NAGADANAMI has been spun, and turned, and gently flipped out of our field and back into the crucible of thrashing bodies. He might have had a sprig of mugwort in hand. I’m not sure Ayesha even moved.

“Ah, my Shadow Sistxrs.  We are currently on our sixth series, which is based on the Elements: earth, air, fire, water, and spirit. We meditate on these energies, work with herbs that relate to the element of the week, and practice moves that embody the element. In our Earth class, we focus on rooting, staying grounded, setting up our solid base, upon which all other moves can be practiced from, mixing it with self-defense both personal and metaphysical.  Collective healing. Connections are the catalyst. Hang on.”

Another punk, drenched in sweat, eyeballs spinning, lunges up to us.

And off she staggers, swept back into the maelstrom of bodies slamming against one another.

“Did you hear about the TERF action at Pride?”

Ayesha sighs like someone exasperated by a crossword puzzle.

“I refuse to see these people as feminists because they clearly do not fight for the rights of all women, only the rights of people they ‘deem’ as being acceptable to societies gender norms. Maggie Thatcher and her mutant clone Theresa May are the conceptual embodiment of TERFs. The witches in the club scene for our video cast a hex on the TERFs, to possess their leader and burn down the binary code.”

“Sounds great. What you up to now?”

“An apocalyptic overthrow of the patriarchy, gender binary, and capitalism. We will live in queer polymers communes in the woods, growing food and fungi, tending to the land that our generation has fucked.”

We hold hands, skip over a puddle of vomit, and head into the dusk.