The boys hail a skull-faced deity throughout called “Trevor,” but not even Trevor’s power can save them from the trial that ensues. Stripped of their Purge-like masks, the five protagonists seem too young to have committed such heinous crimes, yet the lies they’re quick to spin prove that they weren’t just under the thrall of some demonic power. These boys are genuinely evil, representing the very worst of toxic male aggression, which makes the casting choices here even more interesting. 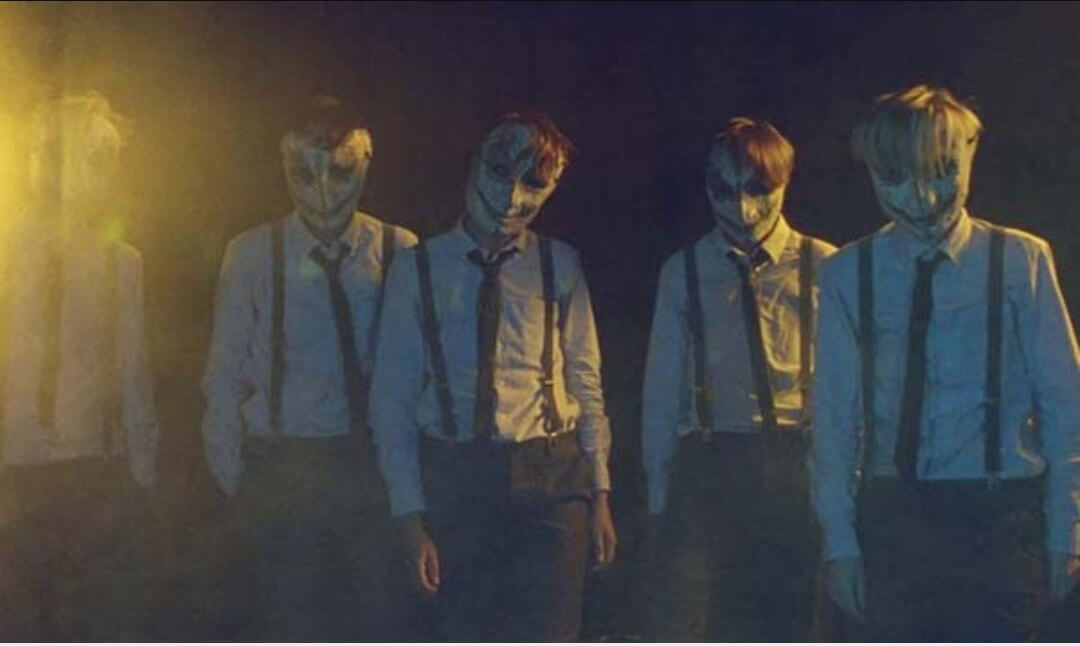 Although it might not be obvious from the outset, every member of the titular gang is actually played by a woman. While this adds an even more unnerving edge to the early acts of violence, it soon becomes clear that this decision was made for reasons that extend far beyond mere stunt casting.

The “anatomy” in question is the captain’s tattooed penis, which has directions marked out on it like a treasure map that leads to something even more precious than gold. If it weren’t for the age difference, lines like “If you want something to read, come and see me” would be more amusing than disturbing, but not even all that can prepare audiences for what comes next.

One of the reasons why this emphasis on sex works so well is because of where the film is leading us. After enjoying the island and all its pleasures, the boys discover that the fruit they’ve been eating has transformed them from male to female. Cue some howling as their genitals fall off onto the sandy beaches in a scene that is likely to either amuse or horrify you depending on your own gender identity.

Noted academic Judith Butler once said that “Masculine and feminine roles are not biologically fixed but socially constructed” and it’s clear that such concerns are what Mandico’s script strives to explore. By casting women in each of the initially male parts, the audience’s perception of gender is toyed with throughout, forcing us to question where various aspects of each performance lie. Cross-dressing isn’t exactly new to cinema, but few films visually convey the fluid boundaries of gender like this one.

Sex and gender are blurred even further after we learn that Tanguy and the Captain are caught halfway in between the masculine and feminine, sporting one breast each. Gorgeous, old-school aesthetics combine with modern-day technology to recreate this personal limbo on a visual scale, imposing various colors and layers onto the almost mythological, dream-like world that the “boys” have found themselves in.

Popular Romanian-American actress Elina Löwensohn brings some gravitas to the film in the role of Dr. Séverine, the former man who has capitalized on the island’s peculiar powers, and it is she who argues that the “Future is woman.” Once the ‘Wild Boys’ overcome their male fears and accept their femininity, their situation inevitably improves, proving her right for the most part, although Séverine’s claim that “a feminized world would stop war and conflict” still comes into question by the film’s end.

Séverine tries to explain to our gender-bending protagonists at one point how this experience will affect them, suggesting that “A new perspective opens up to you,” and the same is true of watching The Wild Boys. Words and images might wash over you like a fever dream, but the overall impact of the film will provide you with a whole new insight into the complex intersection of gender and sexuality.

Between the vulgar eroticism on display and the splashes of Raul Ruiz-inspired surrealism, Les Garçons Sauvages isn’t an easy film to watch and some may give up on this journey long before the island is ever reached. However, those who persist and embrace the inherent queerness of Mandico’s vision will find a tale that authentically explores the dangers of toxic masculinity in more unique ways than the inevitable #MeToo retrospectives of the future ever will.

The Wild Boys will open in the US on August 24 before arriving on home video in late fall.