Fabien (Thomas Scimeca) wakes up with no memory of how he arrived in this strange forest, surrounded by the rotting remains of a picnic. After taking a moment to consider his options, the young man begins to converse with some fellow picnic-goers nearby and then proceeds to run off with their bowl of salmon. It’s not long before Fabien then crosses paths with another outsider of sorts called Yoni (Basile Meilleurat) who blames himself for the death of his boyfriend and will do whatever it takes to attend the funeral.

Early on, Yoni “accidentally” steals his boyfriend’s severed head, and embarks together with Fabien on an anarchic road trip through France on their way to Paris. While this sounds fairly straightforward in theory, the truth is that Bêtes blondes actively resists labels of any kind and is therefore impossible to categorize as a love story, a road movie or anything in between. Attempts to deconstruct the narrative in a conventional sense are therefore frustrating for the most part and instead, Bêtes blondes is better enjoyed as a fragmented sensory experience akin to that of a dream.

It’s no wonder then that the film was awarded a prize for innovation by the Venice Critics’ Week committee and a huge part of this is due to Fabien himself. Unreliable narrators are often par for the course in arthouse cinema, but the way that his short-term memory loss is explored here directly grounds the audience in his confusion, throwing bizarre situation after situation at both him and us alike. Nowhere is this more evident than in later scenes where Fabien’s past life as a sitcom star interrupts the narrative, transporting us to an artificial and antiquated environment that will seem strangely familiar to anyone who enjoyed primetime TV in the ‘90s.

Such a description might evoke the work of director David Lynch or the fractured narrative of indie hits like Memento, but Scimeca’s performance in the lead imbues these surreal and often disjointed chapters with a warmth that’s rarely found in these films. Although it’s not always easy to identify with Fabien as a protagonist, it’s far easier to like him as a character and the audience genuinely feels for him when memories of his former partner Corrine seep in and begin to take their toll. 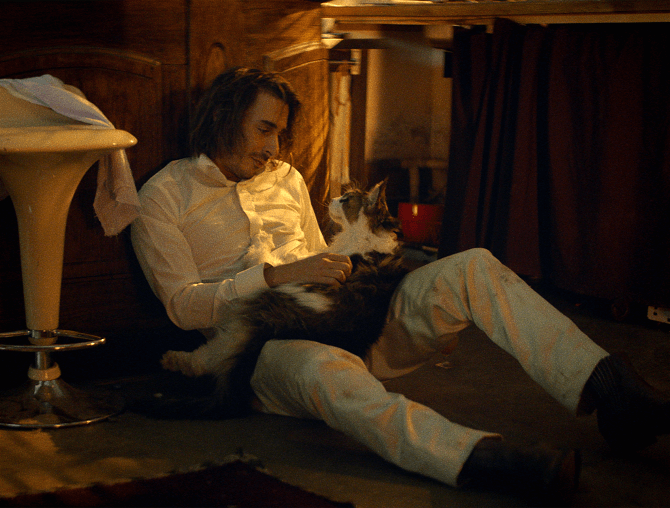 These painful recollections slip in and out of the narrative like a dream, distorting the film’s already slippery take on logic and plotting. At one moment, Fabien is eating ash because his taste buds don’t work and in the next, he’s chewing an earring off a decapitated head. Later on, he and Yoni enter a sex shop where the owner also happens to be the President of Fabien’s fan club because why the hell not? It’s impossible to predict what will happen next, and while there’s something rather intoxicating about this, patience is required for some of the film’s more absurd moments.

Fortunately, Walther and Matray help unify these odd, disparate elements through a nostalgic lens, hearkening back to the Eurotica of old with beautiful, retro-styled shots. Even when the hallucinatory nature of Bêtes blondes becomes wearying around two thirds in, the film itself is still stunning to watch, defying expectation stylistically as well as narratively.

Just like its protagonist, Bêtes blondes is confused, chaotic and often lacks taste, but the film as a whole remains charming nonetheless. It’s safe to say that no other feature has explored the disintegration of identity with such charm and innovation in recent years and although it might not be for everyone, audiences who are willing to set aside the film’s flaws will discover that Bêtes blondes is the strangest and perhaps most unique queer movie they’ll see all year.