There is perhaps no other film nominated for a Golden Globe this year as timely and relevant as Battle of the Sexes.

Based on the highly-public battle tennis legend (and now out lesbian) Billie Jean King fought for gender parity in professional tennis in the ’70s, the film, starring Emma Stone, illustrated how difficult it was for women to have access to the same pay rates and sponsorship money as their male counterparts. On top of that, they dealt with sexual harassment and a general lack of respect simply because they were women.

Unfortunately, things haven’t changed that much in three decades, and tonight, King walks the Golden Globes red carpet not just as the subject of Sexes, but as an activist speaking out in support of Time’s Up, the movement and defense fund that is directly supporting gender parity and the combatting of assault and harassment of women.

King will walk with Stone, and join several other activists who are the dates of nominated actresses, including #MeToo founder Tarana Burke (with Michelle Williams); Alianza Nacional de Campesinas’s Mónica Ramírez and Calina Lawrence, an advocate for Native Treaty Rights, with Big Little Lies stars Laura Dern and Shailene Woodley; the Co-Founder and Co-Director of the Restaurant Opportunities Centers United, Saru Jayaraman, with Amy Poehler; Ai-jen Poo with Meryl Streep and; Rosa Clemente with Susan Sarandon; and Marai Laras, Executive Director of Imkaan, a black and minority ethnic (BME) women’s organization working to respond to and prevent violence against marginalized women and girls in Europe, with Emma Watson. 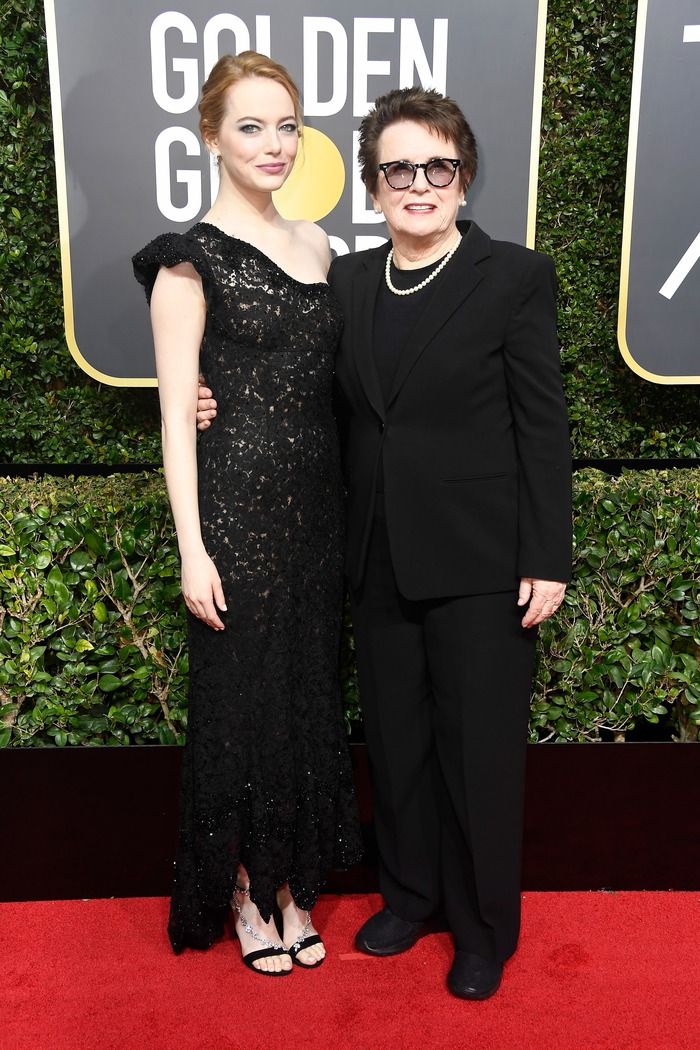 “I think it’s one step at a time,” Stone said on the carpet. “Every generation has to fight for equality and its now Emma’s turn with her generation,” King said on the red carpet. “And it’s great to be here tonight wearing black. We really have toit’s gotta stop, it’s gotta stop now. And we have to help each other and it’s everybody, all genders together.”

“Billie Jean has been using tennis as a platform since the very beginning,” Stone said. “That’s pretty much the conversation that happens with Billie Jean.”

Time’s Up on imbalance of power. For all individuals across all industries…we are working together in unity. #timesup @timesupnow

So far, Time’s Up has raised $15,885,919 of their $16 million dollar goal. The money “will provide subsidized legal support to women and men who have experienced sexual harassment, assault, or abuse in the workplace and while in pursuit of their careers.”

Tonight, activists, actors, and other entertainment industry executives are showing their support by wearing black or Time’s Up pins, and speaking about the movement on the carpet and stage.