The 2018 Winter Olympics are already shaping up to be the biggest year ever for LGBTQ Olympians. Just a few hours before Canadian figure skater Eric Radford became the first openly gay man to win a gold medal at the Winter Olympics over the weekend, Dutch bisexual speed skater Ireen Wüst earned her 10th medal, making her both the first out queer medalist at Pyeongchang and the most decorated LGBTQ Olympian to date.

”I just went for it,“ Wüst told Reuters after Saturday’s 3,000-meter race, for which she took home a silver medal. “I think I had a really strong beginning of the race. I raced for the gold, not for silver or bronze. I went really well, only the last lap was really hard. In the end I was so close but it’s not good enough. I have to be satisfied with the silver, although it hurts a little bit.” 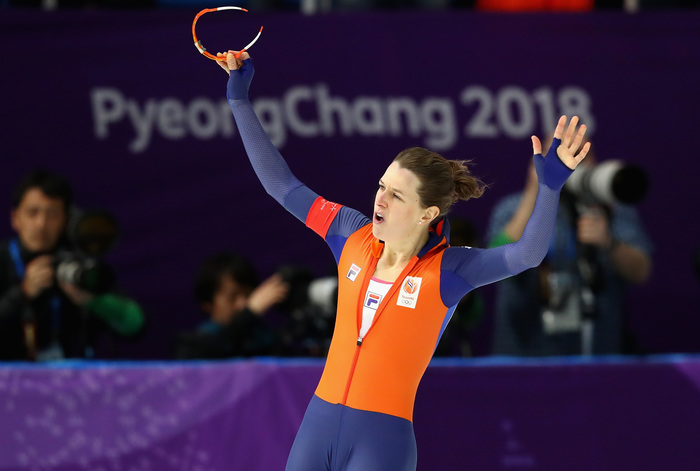 On Monday, though, the 31-year old Olympian took home the gold medal in the Women’s 1500-meter race, finishing in 54.35 seconds, narrowly skirting Japan’s Miho Takagi. This is the fourth Olympics she’s competed in, and the fourth Olympics in which she’s won gold (previously in Turin, then Vancouver, then Sochi). In total, the speed skater has accrued five gold medals, four silver, and one bronze.

But Wüst isn’t just shattering records for LGBTQ Olympiansshe’s also making history in her sport. The skater became the most decorated Olympian in speed skating. She’s also a six-time world speed skating champion and the youngest person from her country to earn the title of Olympic champion.

Wüst, who came out publicly in 2009,announced her relationship with girlfriend Letitia de Jong, also a competitive speed skater, last year. In the Olympic Qualifying Tournament, de Jong placed 11th, but only 10 speed skaters were allowed to go to Pyeongchangwhich is the best gay sports romance story since Battle of the Sexes.

“I‘m feeling really happy and I still cannot believe it,” Wüst said of her latest win. For me, it’s incredible.”