Penny Arcade (aka Susana Ventura) is a modern-day Ruth Draper, if Ruth had been a hooker with a heart of gold and a degree in sociology. She’s a queen of body politics, monologue, and aphorism. She’s been there, done that, and still has the wherewithal to bare it all in service of the space she creates with a sound system, a projector, and a troupe of strippers. Her Bitch! Dyke! Faghag! Whore!: The Penny Arcade Sex and Censorship Show, co-created with multidisciplinary artist Steve Zehentner, is a joyful, sex-positive, queer carnival that asks us to get up from our seats and dance, even as it nurses our political and spiritual wounds.

Penny submitted B!D!F!W!, a “totally improvised performance on sex and censorship,” to the NEA as a “fuck you” in 1990, when the institution became embroiled in a censorship and funding crisis. The show spawned an international gay burlesque movement and remains a fixture of the Gay Shame movement. Though 28 years and 800 performances have come and gone since its premiere at P.S. 122 (aka Performance Space New York, the space in which the show currently runs), the respectability politics characteristic of the early ‘90s continues to dominate public discourse around censorship in 2018. The show could easily have been conceived and developed during this decade. 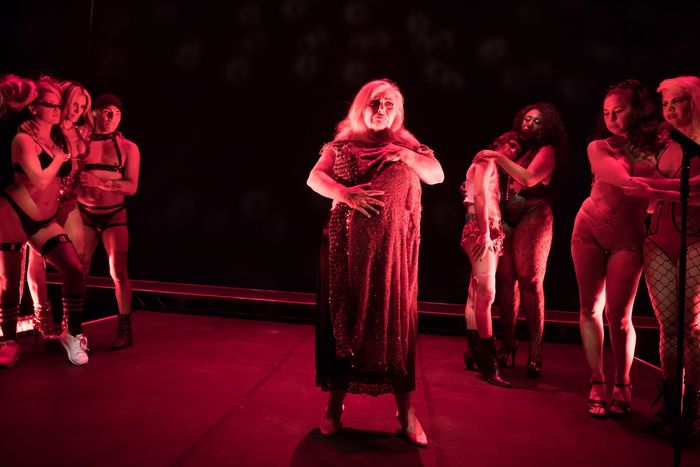 Penny begins by introducing her erotic dancers one by onefemale, male, and other, in looks that draw from Folsom Street, Las Vegas, and Alexander McQueeneach with their own backstory. (One of them, Kevin Aviance, was famously assaulted in 2006 and left for dead in front of an East Village gay club, where no one offered help.) She says we shouldn’t worry about distracting her or the audience if we need to step over and grab a drink at any point “If, after 50 years of performing, I can’t hold your attention, that’s my problem, not yours.” There will be an audience dance break, and if we’re concerned about being judged by other people while dancing, well judging is what people do.

She manages to deliver this, and other hard-earned life lessons, throughout the evening without venturing into cynical tough love. However, she admits to periods when she has struggled to connect with an audience that didn’t suffer the heartbreaking losses of the AIDS crisis in the ‘80s understandable, since she’s lost over 300 friends to the disease. She doesn’t hesitate to remind us that rates of HIV infection in the United States are the highest they’ve ever been. But the evening is far from weighed down by its moments of seriousness it’s really a lot of fun, from the opening “Phone Girl” monologue on. 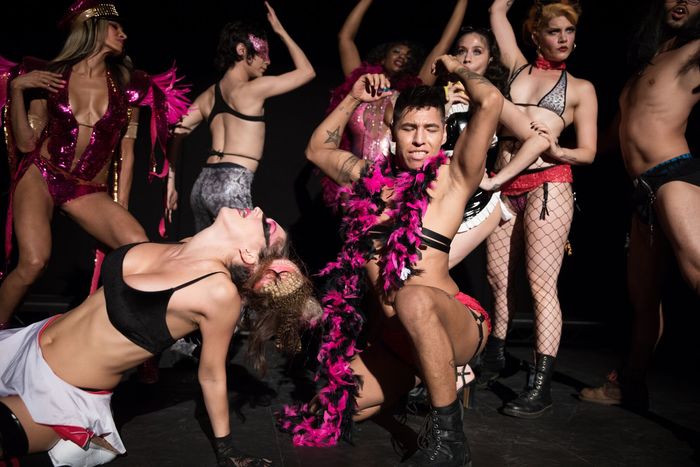 Though every one of Penny Arcade’s one-liners could serve as the basis for an entire evening of theater, one resonates particularly deeply. “We need a new language, not from academics or politics we need a new freedom of expression” lands as an urgent call to action at a time when institutions like the NEA and the NEH find themselves again on the edge of annihilation, and conversations around freedom tend to spring from First Amendment concerns or misdirected neo-Marxist critique. She seems to suggest that the human body itself, and human bodies in communion, may serve as the basis for the new language she proposes, a new locus of power. “People who fuck think,” “Erotic dancing is the one thing women have invented to control men,” and “Most people lead lives of constant deprivation” all speak to an untapped source of influence, at once consolidated and disavowed, in the bodies of people who love to have sex. But sexual communion isn’t limited to the bedroom. Penny speaks to an erotic knowledge we can all access when we’re brave enough to face our fear of isolation together “Sometimes, when I’m morbidly depressed, I go and sit in the dark in other people’s audiences.”

The ultimate delight of Penny Arcade’s act is that, at its heart, it’s a unique place for erotic dancers to be featured with respect for the athleticism and artistry they bring to their work, a “temporary autonomous zone” where their livelihoods are treated with dignity, with all the details that are required to flesh out fully formed, sympathetic characters. They’re not backup dancers this is an ensemble show. Blaine Petrovia, Pole Sport Organization’s 2017 U.S. National Championship winner, stands out as an especially versatile performer, scaling the pole with agility and strength. Juan López, clad in leather gear and a whip, gives a bodily connected, heart-centered performance that is most touching when in counterpoint to Penny’s monologues about her personal losses to AIDS. 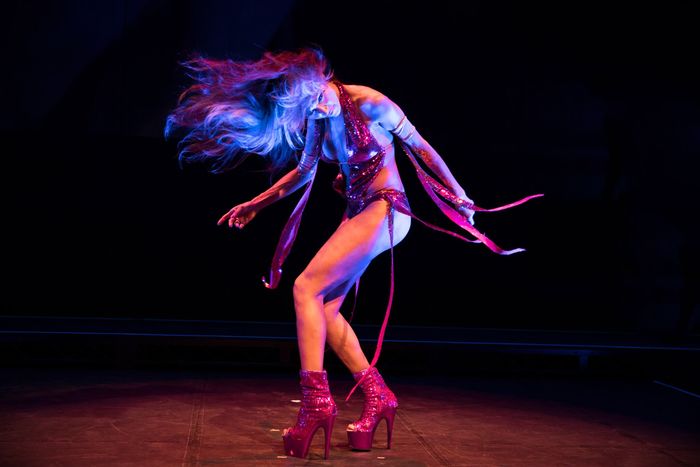 Penny herself says, “To create a transformational experience in the theater, there has to be love” in the United States of Penny Arcade, love abounds.

Penny Arcade’s next show, Penny Arcade: The Faghag and Her Friends in The Summer of Love, will be at Joe’s Pub this July.