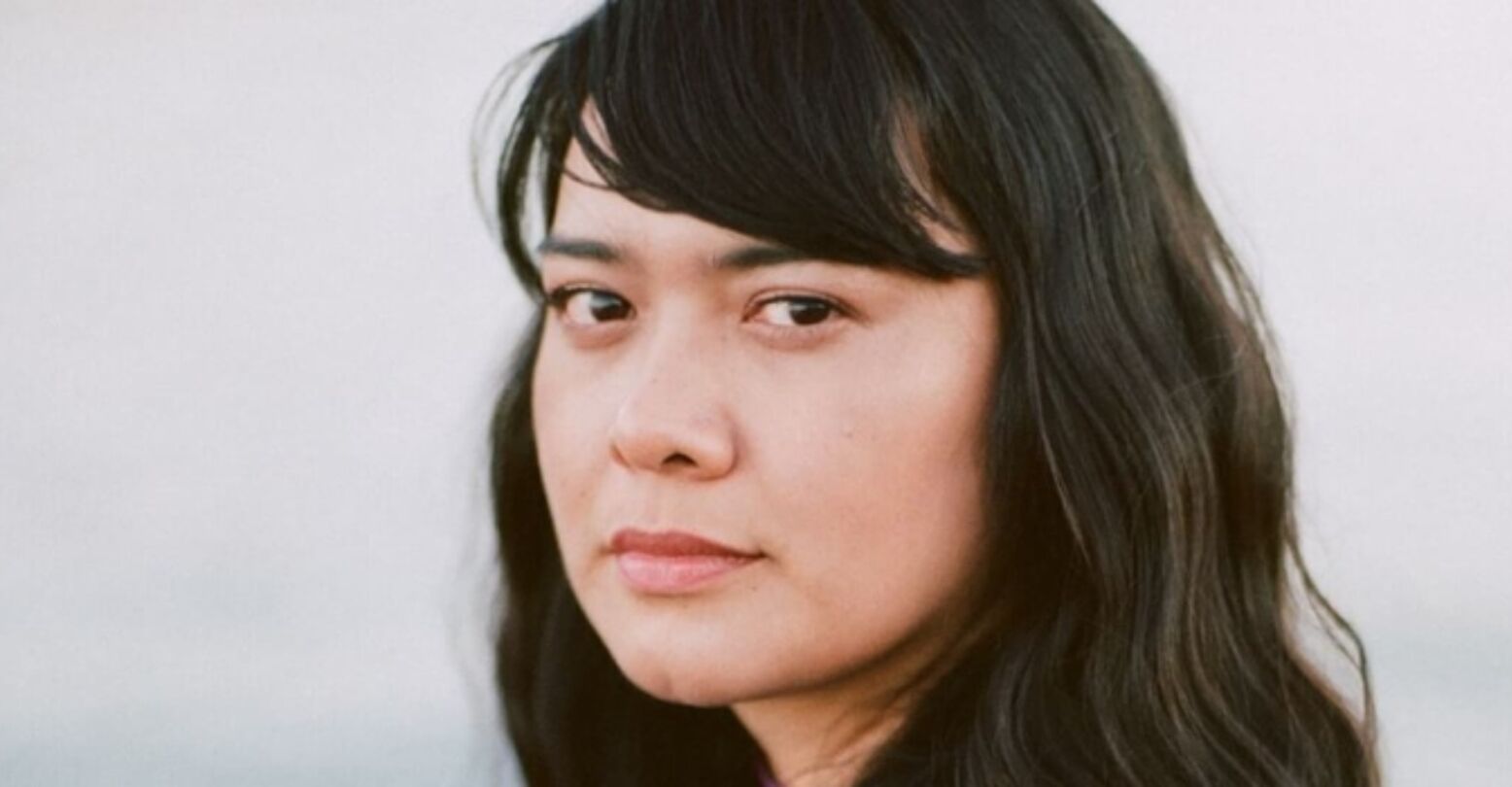 We caught up with Black Belt Eagle Scout after their Los Angeles tour stop at the Bootleg Theater and shortly following the release of their first solo album.

I read something about you not feeling any anxiety about being tokenized as Native American in this industry. Can you tell me a little about that, and does the same go for the other aspects that make up your intersectional identity like femininity, queerness, or openness as a polyamorist?

Black Belt Eagle Scout: It’s funny you’re asking me that because yesterday I had this terrible interview and somebody called my music “tribal.” That’s just not cool, especially if you’re this white guy that doesn’t know a lot about me. I think it depends on who I’m talking to, you know, about being an indigenous musician. To me, indigenous people and how I’ve been raised, like, I’ve been raised to be really proud of my identity and to be proud of it because I’m a survivor of genocide essentially, so that’s what I grew up with and that’s what I believe.

I want more indigenous people to know more about me. I want people to see how indigenous music can evolve and how it can be different than just our cultural music. I want to not just survive, but to thrive. 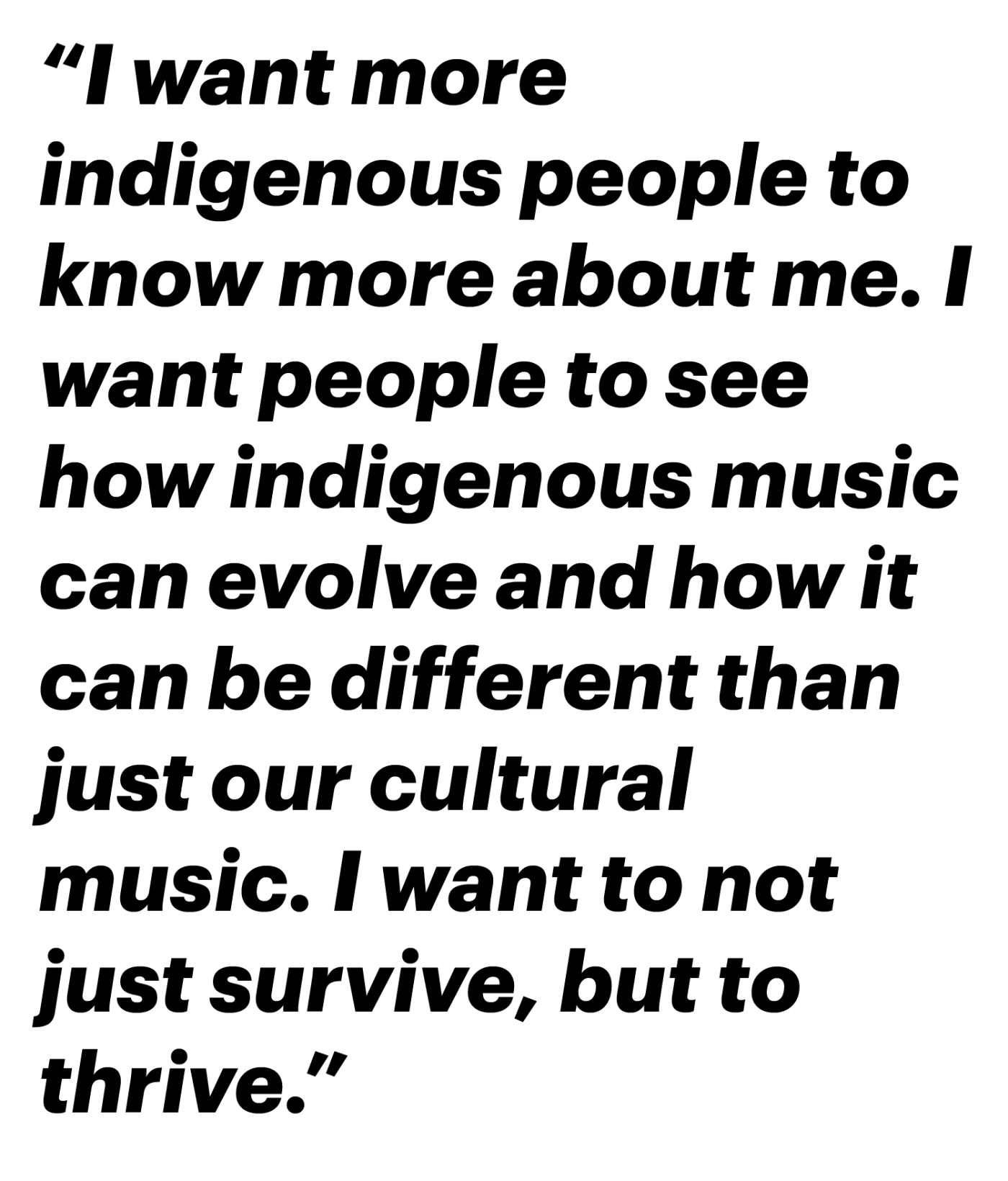 I think also that in terms of my sexuality and how I am in relationships, a lot of the feelings that went into the album Mother of My Children, those are feelings of openness and feeling and being loving to people and feeling heartbreak. That’s what the album is about, and I think it would be weird if I didn’t mention my identity because the album is definitely emotional. 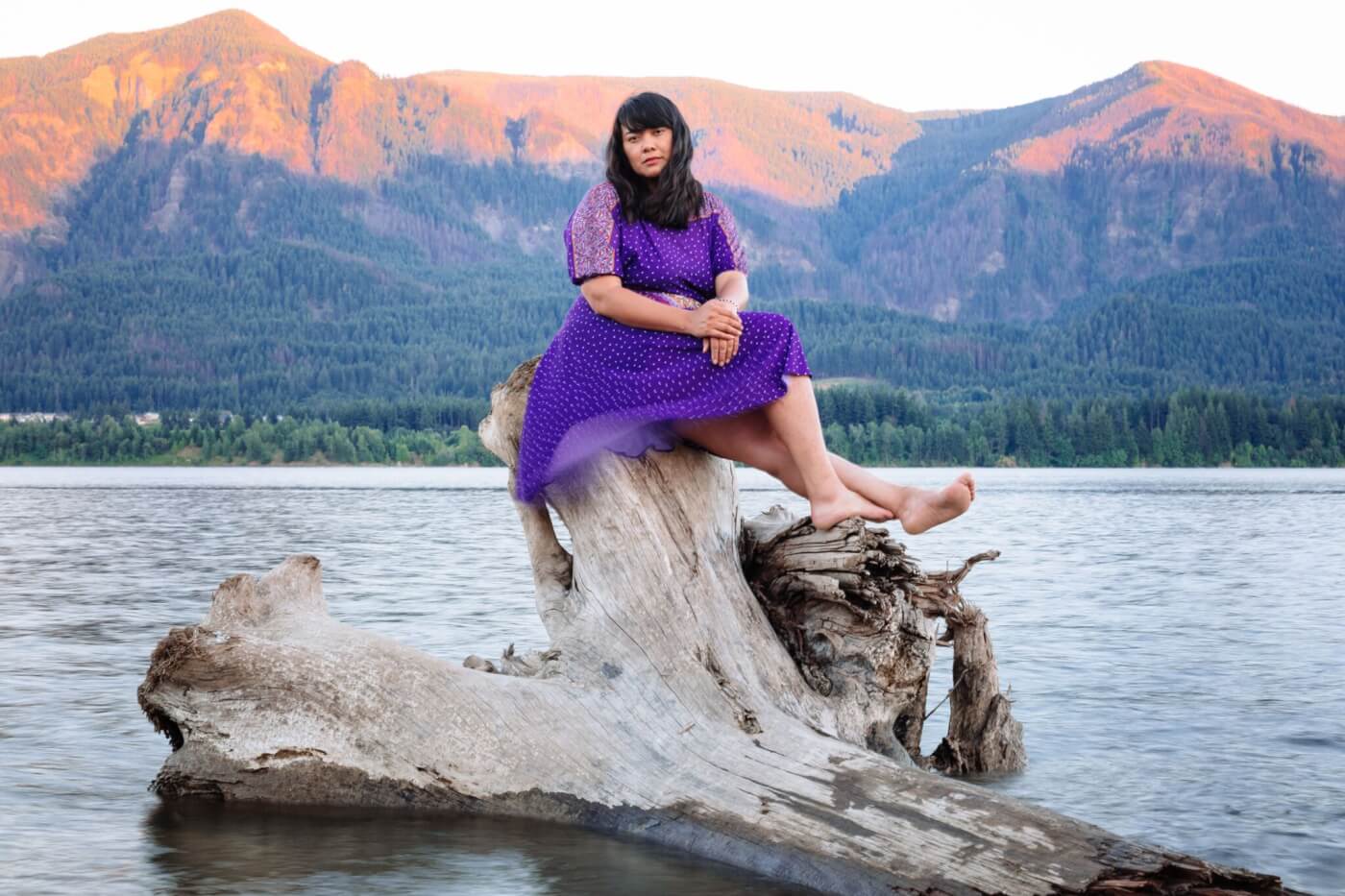 Can you tell me about “Soft Stud”?

I call it my queer anthem. “Soft Stud” is about somebody who has this identity of being like this very soft studly person. It was written about someone in particular, about my desire for them but also a feeling that I’m unable to have them and feeling frustrated with that. I call it my queer anthem because it’s essentially about how I felt in one period of time as a queer person in an open relationship and how that can get frustrating sometimes, especially if you’re sharing partners and feeling like you’re not the one who is the primary partner. So that song, the end of it, I go into this huge guitar solo. That is like, well, I’m feeling frustrated and you know, the only thing I can do is I can do this guitar solo. It’s freeing; it’s empowering. It’s me trying to get out that frustration.

Is there anything else you can share about Mother of My Children that you haven’t yet?

There is something interesting about the very last song “Sam, A Dream.” I discovered this after the record was put out initially by the local label. I was listening back to it and I realized that I forgot to record two verses, the singing part of it. So when I play it live, I sing the verses. When it’s recorded, it doesn’t have it. I don’t know if it was just like an oversight. I didn’t think about it because it was a projection and the recording of the album, it took a lot out of me. I wonder if people who come to my shows realize there’s something added because the only thing that they’ve heard is the studio recording.

What are the lyrics to this part of the song?

I have to sort of think about it. It’s hard to remember the lyrics when I’m not actually thinking about it. Can you read the first lyrics?

“I’d wait all night just to see you. Wait my whole life just to meet you.” 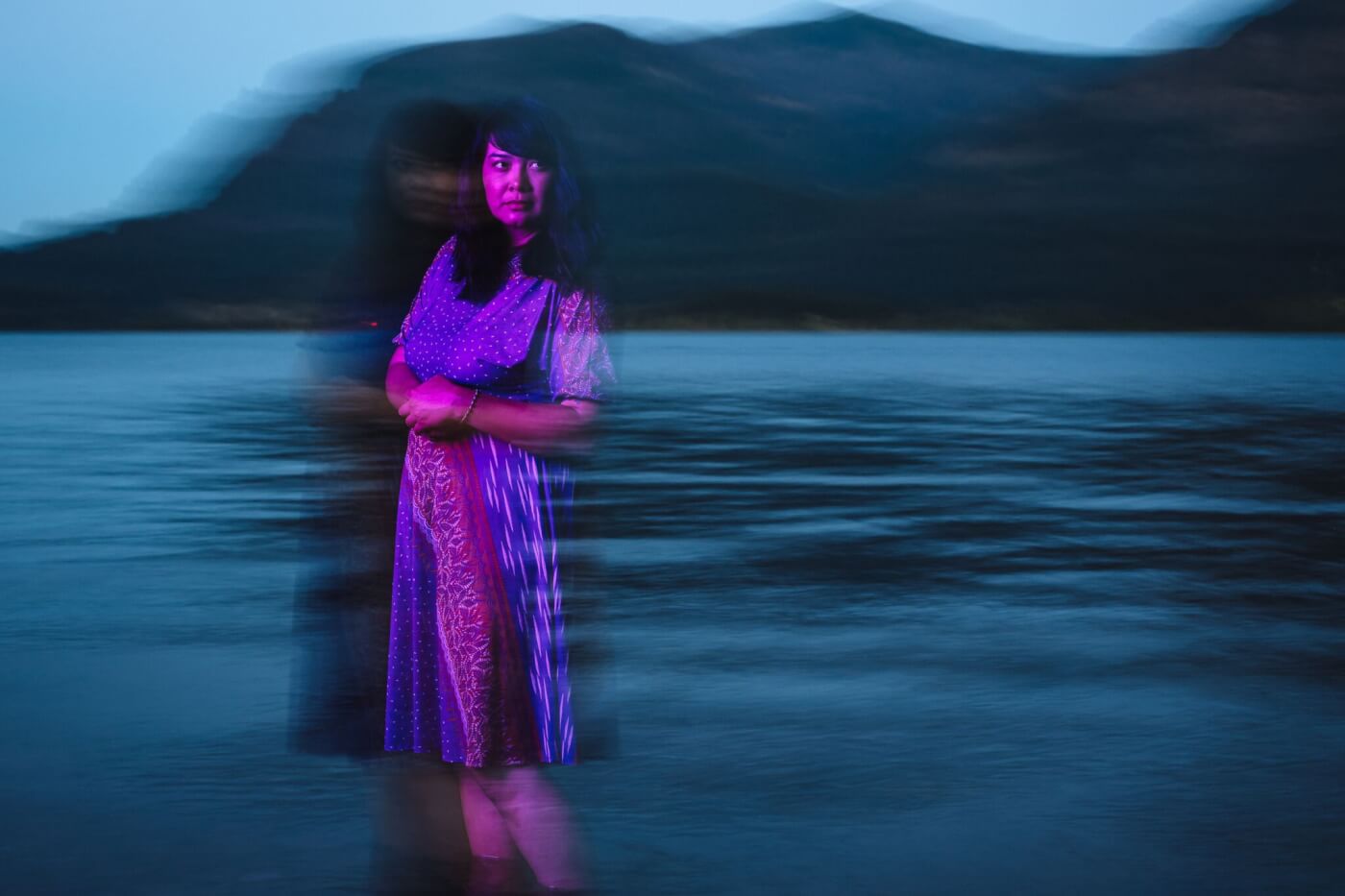 I read that you’re an activist. Recently at INTO, our newsroom covered a protest where members of a nationwide organization, TransLatina Coalition,  represented by and advocating for rights of trans Latinx people, unveiled a 20 x 15 foot banner at a World Series game stating: “Trans people deserve to live.” Did you hear about this?

I didn’t. Yeah, so that’s probably in response to the government. They think that our identities don’t matter. The fucking government, man, it’s just like always trying to kill marginalized people. Even Democrats — even Democrats in government will do shady things. Like I heard recently that Hillary Clinton is thinking about running for president again and I think she’s evil. I think that there are a lot of things, bad things, that she’s done officially as a leader in power. I think that once people have power, they just think they can do whatever they want. They can erase lives and they can do those things to people who are working so hard so that you know, they can take advantage of them. It’s not okay, and I feel like I want to be there for that protest saying that trans people matter. I have friends who identify as trans and especially within native culture. They can identify as two-spirit but they can also feel like they feel more comfortable identifying as trans. It makes me angry. I feel as somebody who has experienced the trauma of native indigenous history, I don’t know if we’re ever going to be in the position where that’s not going to happen as long as we have this government.

I was interested to hear your take since I think it was a very big deal.

I’m surprised I didn’t see that. I feel a lot of things, like local Portland things that happen and I wonder if it’s just like a city thing because I don’t — on my social media outlets, I’m not following a lot of people that live in this area. So sometimes what gets shared is mainly regional to me.

Do you have any queer indigenous people that you look up to?

I do. One of my really good friends, their name is Demian DineYazhi. I was introduced to them maybe about five years ago or so by a mutual friend in Portland who’s native and in the art scene. They’re a visual artist. My friend introduced us because I think that they thought I needed more queer, native friends. We decided to meet up and then we realized that we loved a lot of the same music and that we kind of had similar histories of growing up with music and we really bonded over that. Before that, I’d never really met another queer, native person who had similar history as me. I feel close with them and they’ve always been super supportive of me and their politics are super radical. They helped me figure out my identity as a radical, indigenous, queer feminist because that’s how they identify as well and I think that you should look them up. Follow everything that they do. I consider them somebody who people need to know more about and have present in their lives.

Were you fortunate enough to have any role models growing up that were queer and Native American?

No, I wasn’t. Only until I moved to Portland and immersed myself within native culture here in Portland did I sort of start to find people. And I think that within the past year or so I’ve been finding more, but it might just be because I’m being more open about who I am. People read stuff about me, or maybe because I’m playing music. Through the shows, too, like coming down here to California through the tour with Tacocat, there’s been so many queer native people who have showed up and that’s really special. It was definitely hard growing up because I felt afraid of coming out; I didn’t think I would be accepted. I grew up in a really small community and while everyone was super loving, because it was so small, I was still worried about what people would think. And I was a shy teenager. I wish that I had queer native mentors growing up — and I think about what I’m doing now and I think about if I’m out doing music, I want to be there for somebody and I want to be able to say it’s okay. It gets better. 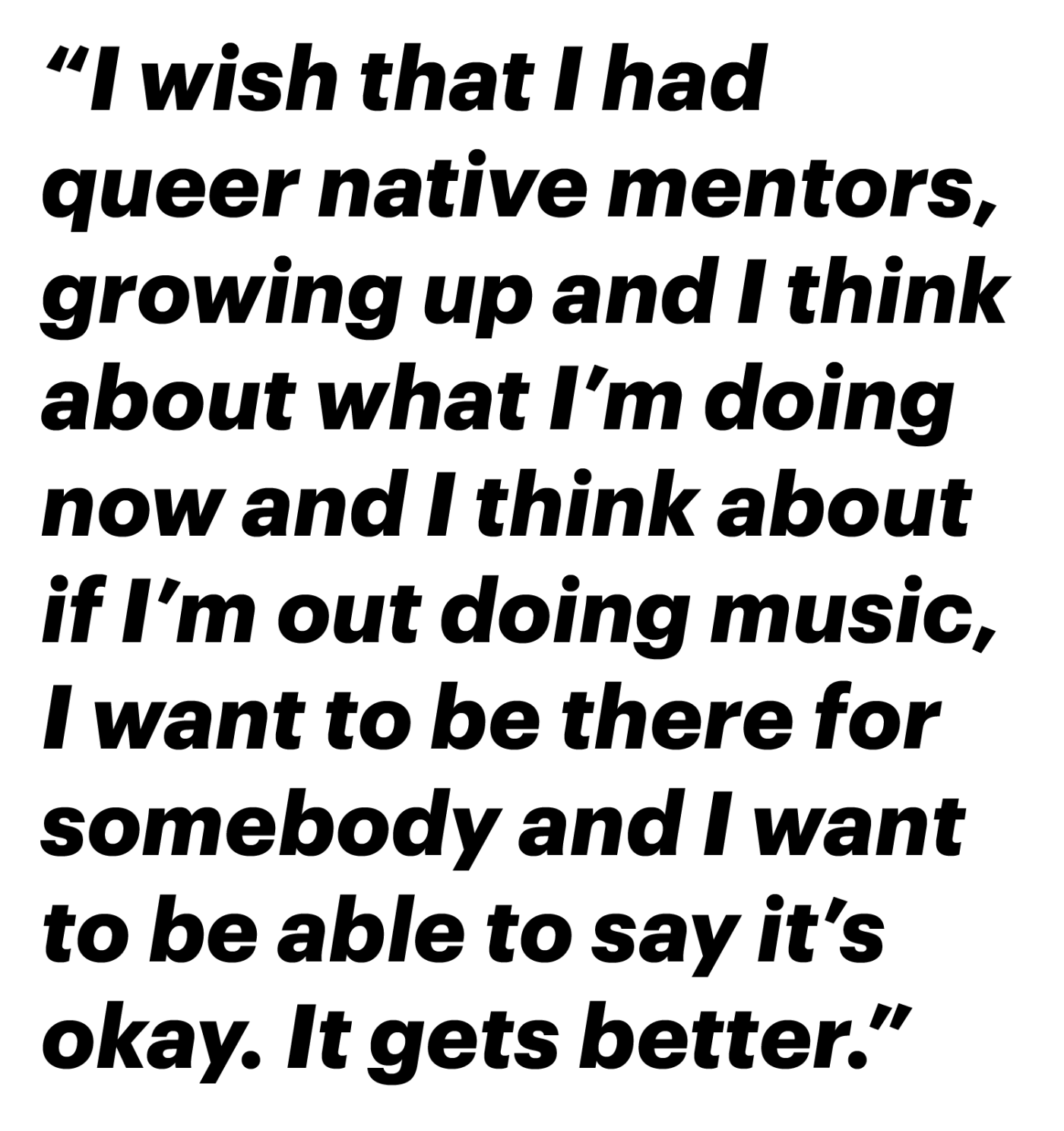 If someone’s struggling, if they’re a young, queer indigenous person and they’re struggling. The suicide rate for native people is high and I’ve definitely been in a spot where I’ve felt super depressed and felt alone and I survived. I know that there are other kids that are out there that might not feel okay. So I’m thinking about myself now because I didn’t have that growing up. Because I didn’t have that, I want to be that for people. 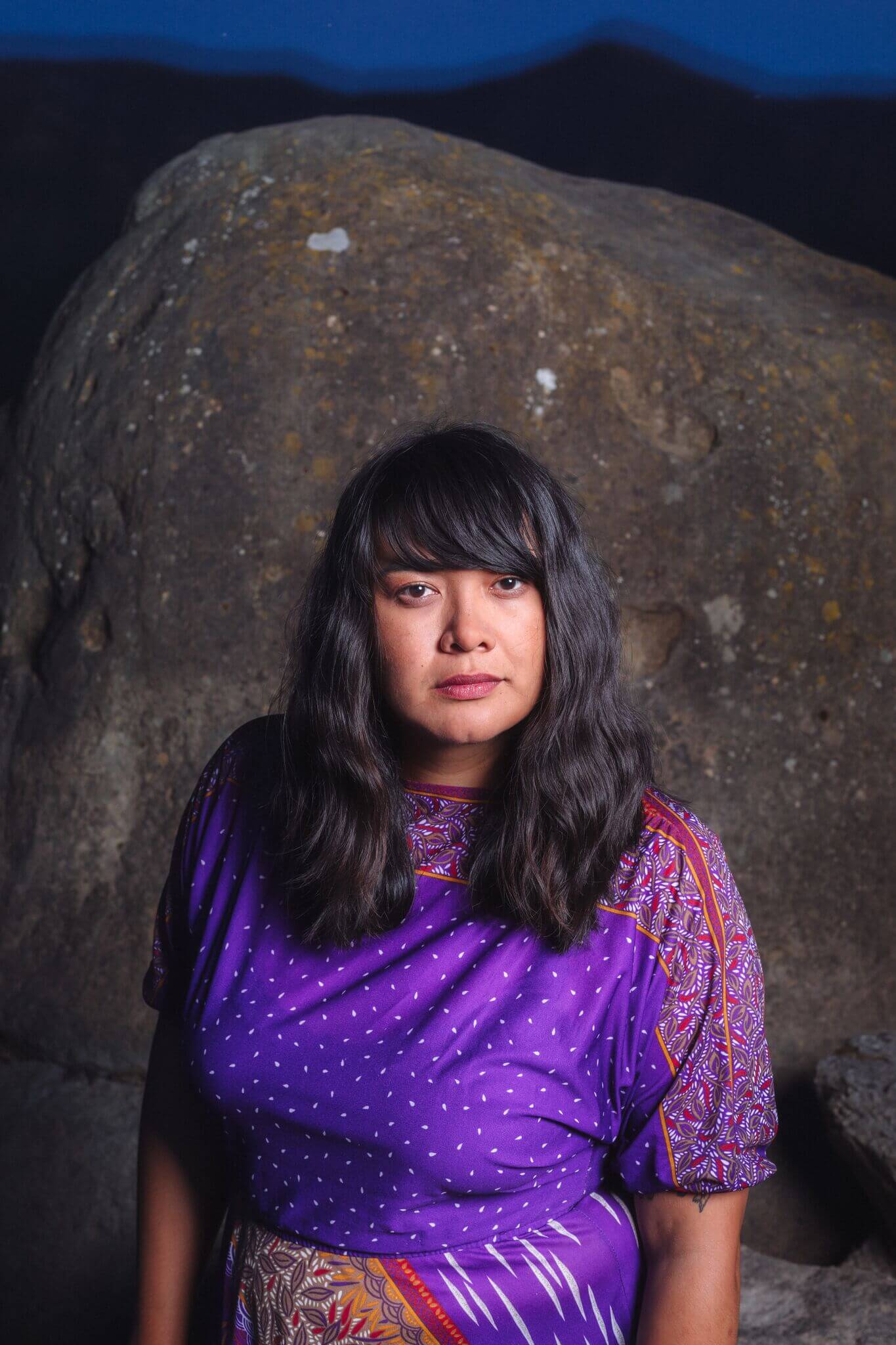 I’m continuing to work on my art and I’m getting ready for more tours like next year. I’ll be back in Los Angeles in May.