After speculations surfaced last year about a possible lesbian romance in Marvel’s Black Panther movie, the film’s screenwriter is finally speaking out, but fair warning, disappointment lies ahead.

Back in April of last year, an early clip of Black Panther was shown to critics, and the snippet depicted a moment of connection between two of the titular character’s bodyguards, Ayo (Florence Kasumba) and Okoye (Danai Gurira). In the comics, Ayo dates a female warrior named Aneka, and their relationship spawned a spinoff series, penned by Roxanne Gay, World of Wakanda. Because Ayo is canonically queer, the critic who got a first look (Joanna Robinson) interpreted this moment to be romantic.

“In the rough cut of this Black Panther scene, we see Gurira’s Okoye and Kasumba’s Ayo swaying rhythmically back in formation with the rest of their team,” Robinson wrote in Vanity Fair. “Okoye eyes Ayo flirtatiously for a long time as the camera pans in on them. Eventually, she says, appreciatively and appraisingly, ‘You look good.’ Ayo responds in kind. Okoye grins and replies, ‘I know.’”

Soon after, Marvel shut down the rumors that Ayo and Okoye would be in a relationship in the film, which engendered a social media firestorm from fans demanding we #LetAyoHaveAGirlfriend. Naturally, LGBTQ fans were let down, as Marvel has yet to feature a queer storyline in their cinematic universe. Now the scene in question has been cut from Black Panther entirely, and fans are accusing the film’s screenwriters of straight-washing. 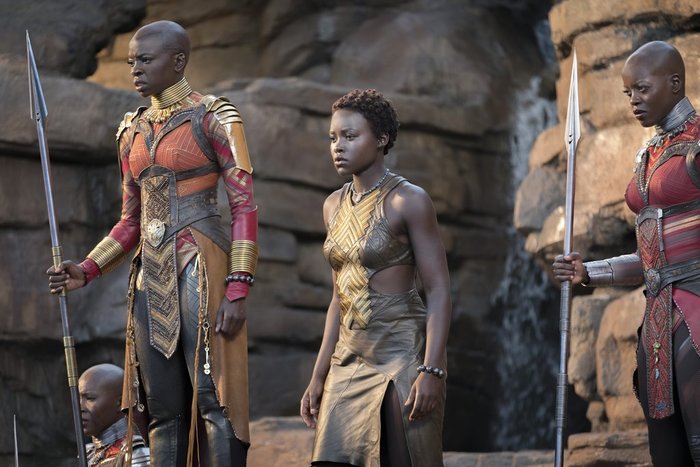 On Monday, the film’s co-writer Joe Robert Cole told Screen Crush that the film was originally written with a queer love story, but then his answers became increasingly dodgy.

“I think the short answer is yes,” Cole said. “I know that there were quite a few conversations around different things, different directions with different characters, and characters that we may have. We thought, ‘Well, maybe we’ll work it this way with an arc or work it that way with an arc.’”

“The scene you’re talking about,” he continued, “I don’t remember. I can’t remember the exact exchange you’re talking about, but I think it was really brief. I’m not sure. I know that it was not–there wasn’t some major theme through that we were looking to explore with that in terms of the story. We didn’t, like, pull out a full thread of some theme. But your friend quite possibly could be right, or I’m maybe having a brain fart here and just can’t remember.”

In the final cut of the film, which hits theaters February 16th, Okoye is actually dating W’Kabi, played by Daniel Kaluuya.

Marvel’s biggest competitor, DC, currently boasts a black lesbian superhero on their new CW series, Black Lightning. But both brands still have yet to tackle explicit LGBTQ themes on the big screen.

Hopefully, Ayo will get her lesbian due in the Black Panther sequel.