First, let’s get Bryan Singer out of the way.

We’re all aware that the production of Bohemian Rhapsody made a lot of headlines. Singer, who faced new allegations of sexual misconduct in the early weeks of the #MeToo movement, was fired and replaced before the film was wrapped. Per DGA requirements, he retains directorial credit, but it’s difficult to tell how much of the film is his. After all, Singer never had any distinctive style. His participation is one of many problems associated with this film, but like the other, better rock musical in theaters now – A Star Is Born – Bohemian Rhapsody went through years of development hell, script revisions, and casting foibles before eventually getting the green light. The resulting film is scarred by the debates that kept it out of production for so long. More on that later.

Bohemian Rhapsody is, of course, the story of Freddie Mercury and the band Queen. If there are any more beloved bands and more revered frontmen, you can count them on one hand. And because the music is wonderful and timeless, anyone who makes a film about it is already playing with a full deck, and naturally, the life of Freddie Mercury is biopic material. Mercury was a Parsi-English queer with a flamboyant stage persona and a four-octave vocal range. His musical innovations expanded upon Pink Floyd and Led Zeppelin, incorporated the classical and the operatic, and came to define the stadium anthem. And, of course, Mercury’s life was cut short by AIDS at the height of his global fame, and his legend has only grown since. This was a distinguished life marked by triumph and tragedy and vitalized by an extraordinary persona. 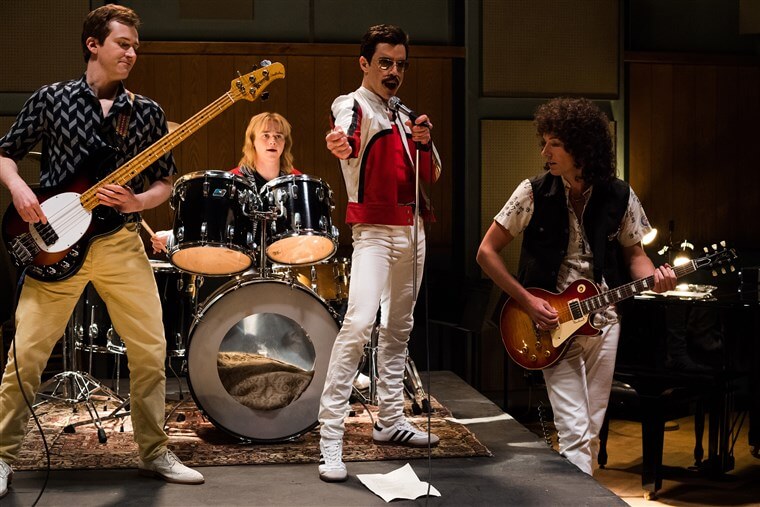 It is to the credit of Rami Malek that he does not evaporate under the demands of the role. In his first lead role in a studio film, Malek is largely convincing and charismatic. On stage – doing some of his own vocals – he captures Mercury’s electric constitution. He is all elbows and hips: pure sex. You want to reward him for the sheer physical energy needed to get the job done. You can see the sweat and the care.

Oh, and then there are the false teeth. You will hear a lot about this set of chompers, which were perhaps unavoidable. If there is a more distracting set of false teeth in cinema history, please point them out to me. Wearing them, Malek speaks slowly and methodically, sounding a bit like Freddie Mercury and a bit like someone with five dollars of dimes in his mouth. They never look natural, and we never adjust completely to them, but they’re certainly a daring choice.

The teeth are not the movie’s biggest problem, but there is a great deal to admire here. When Bohemian Rhapsody is telling the story of a band, its music, and the industry that made them famous, it knows exactly what it’s doing. The film begins when Freddie is a confident young working man – a baggage handler at Heathrow – who knows what he wants and pursues it. He meets guitarist Brian May (Gwilym Lee) and drummer Roger Taylor (Ben Hardy) and inserts himself at the front of their band Smile, which he quickly renames before adding bassist John Deacon (Joseph Mazzello). (None of the three bandmates is especially good, but their resemblances to their real-life counterparts are uncanny.) Starting small, Mercury insists the band sell its van to fund their debut album. Through chance and willpower, they sign a record deal and are on their way, and you believe it, because Bohemian Rhapsody wisely spends so much time mucking about with the band in the studio, depicting the freewheeling process that resulted in such unusual, expressive music. Soon after, when Queen visits their label head (an unrecognizable Mike Myers) and pitches the landmark album A Night At The Opera, Mercury puts on Maria Callas and makes the case for a new kind of rock music. He sounds equal parts idiotic and pretentious, and it all looks more absurd once they get into the studio.

But then we get a hilarious montage of endless “Galileo!” overdubs and a fabulous sequence replicating Queen’s famous “Dietrich lighting” promo video. The album’s bewildered reviews drift by. It’s a pleasure mostly because we’re asked to imagine hearing the song “Bohemian Rhapsody” for the first time, and it’s a welcome reminder of just how adventurous, demanding, and rigorous those songs are, their eventual ubiquity notwithstanding. And although there is little differentiating Mercury’s bandmates, Bohemian Rhapsody is quite good at depicting collaborative genius in the making. 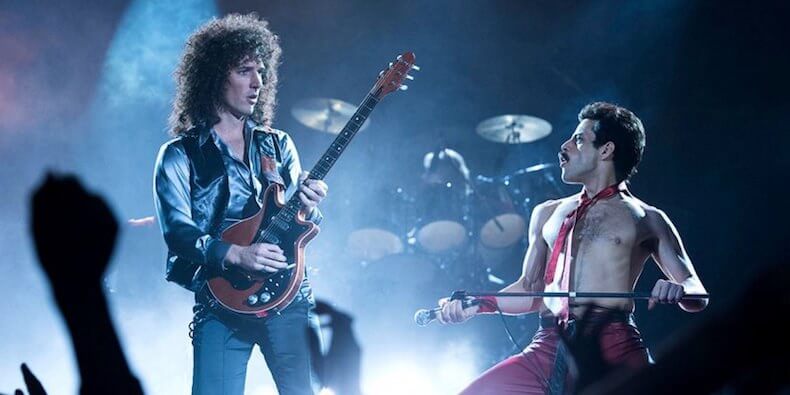 And yet I have the unfortunate duty of reporting that the film comes up short in the most obnoxious way possible. To at least some extent among Queen’s straight fans, Mercury’s queerness has always been something of an inconvenience, and Bohemian Rhapsody is written to privilege that straight audience. Now, it is well-documented that Mercury was queer, and also, that his most important relationship was with a woman, Mary Austin. Their romance lasted six years, though Mary remained his most intimate friend until his death. Though it’s accurate for Mary Austin to figure prominently in Mercury’s personal history, Freddie’s sexuality is handled with kid gloves, and the film’s angle on their relationship makes panicked sacrifices for the comforts of heteronormativity.

The film lavishes Mercury’s heterosexual romance with screen time. As written by Anthony McCarten and played by Lucy Boynton, Mary is a one-dimensional wholesome foil for Mercury’s gay partners, who are represented by a few unpleasant scenes of druggy debauchery in Germany, an unscrupulous, backstabbing manager, and one sweet same-sex kiss with Jim Hutton (Aaron McCusker), the other love of Mercury’s life. And there is not one whiff of gay sex in Bohemian Rhapsody, but as a matter of course, Malek and Boynton have many, many long, intimate scenes undressed in bed. When Freddie comes out to Mary, the result is an embarrassment of gay movie tropes.

Hampered by a (presumably studio-mandated and contractually obligated) PG-13 rating, Bohemian Rhapsody represses and marginalizes its own queer content, stigmatizing it by default. The hetero bent of Rhapsody might be forgivable if it eventually developed into a novel, convincing, or nuanced queer journey. Instead, it’s too evasive and tenuous to be anything but strategic. 20th Century Fox will keep straights in their seats: they’ve made Mercury straight enough for them to swallow and just gay enough for them to feel open-minded. But simply put, you cannot make a good film about a gay man if you are fanatically fretful about alienating a heterosexual audience. Bohemian Rhapsody effectively otherizes its own protagonist.

Furthermore, Bohemian Rhapsody makes the odd choice to wrap up in 1985. (Mercury died of AIDS-related complications in November 1991.) The finale is a spectacular concert sequence, replicating in real time Queen’s era-defining Live Aid performance. Malek is sensational here, and the well-executed scene will seal the deal with Queen fans, but it also conveniently avoids portraying Mercury’s declining years, not to mention his relationship with Hutton. As a result, the film pays the equivalent of lip service to Mercury’s diagnosis, twisting the historical timeline considerably in the process. We get the following short, obligatory scenes: Mercury watches a TV report about AIDS, Mercury suspects he is ill, Mercury is tested. And then, in the film’s most cringe-worthy scene, he returns from a dramatic Queen hiatus to tell his bandmates the bad news, and Mercury’s AIDS is used as a disingenuous shortcut to circumvent legitimate conflict resolution. It is so oblique and equivocal that audiences may leave knowing less about AIDS than they did going in.

Throughout the back half of Bohemian Rhapsody, I couldn’t help but think about the long early scene with Mike Myers in the offices at EMI. Short-sighted and fearful, the label whines about the commercial prospects of A Night at the Opera. (“But nobody likes opera.” “I like opera!”) I can imagine similar boardroom back-and-forths at Fox about awarding a big budget to an unambiguously queer biopic. All these years have passed, and we still remember and mourn Freddie Mercury for the kind of grand-scale artistic daring and conviction nobody involved with Bohemian Rhapsody has courage enough to replicate.

Except, perhaps, whoever designed those teeth. If only the rest of the film had half as much bite.