Bonnaroo announced its line-up for 2018 today and the top billed artists are cisgender straight guys for the fifth year in a row. 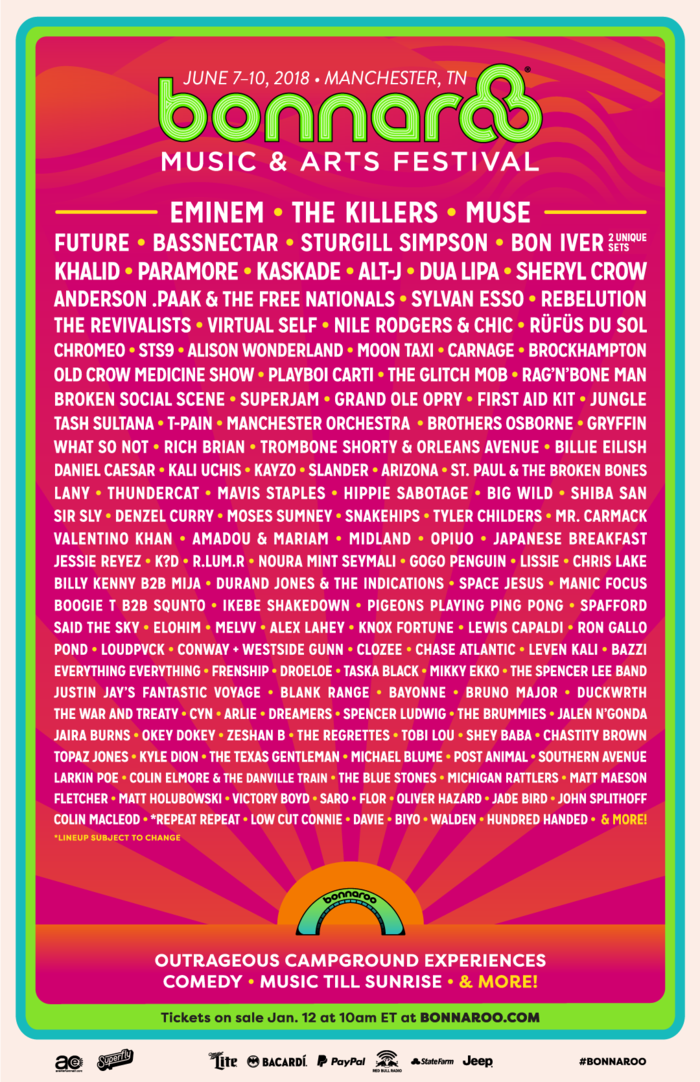 Adding insult to injury, almost every story published from major press announcing the line-up makeszero mention of how few women and/or LGBTQ artists are included, despite frequent criticism and complaints that major music festivals lean heavilymale and, as a consequence, make for a very unfriendly place for women and LGBTQs to be as participants or attendees. 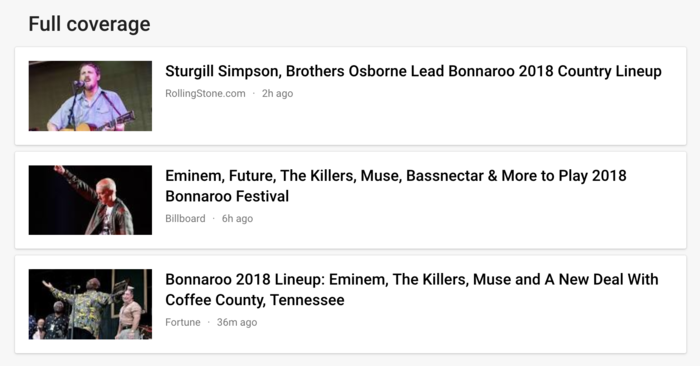 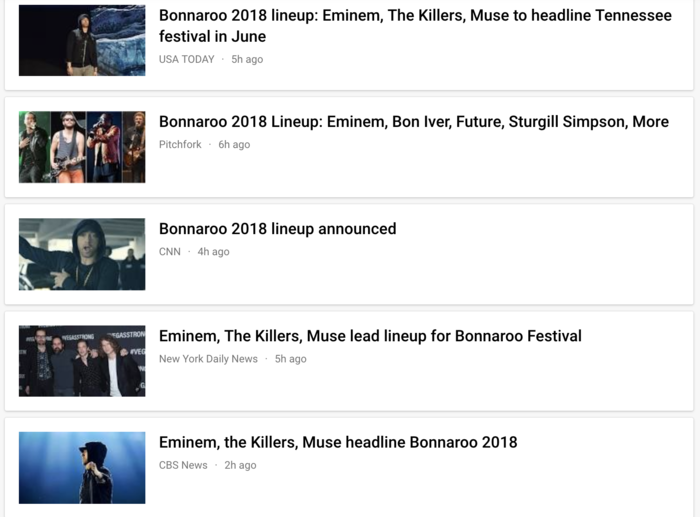 The only acts that have more than one woman is duos First Aid Kit and Larkin Poe; The Regrettes, Southern Avenue, and, possibly, Broken Social Scene, depending on their current rotation.

Otherwise, there are zero all-women bands, and zero women DJs. And as far as LGBTQs go, the only out artists that appear are in The Regrettes or singer/songwriters Tash Sultana and Chastity Brown.

This isn’t anything new for Bonnaroo, sadly, as this is the festival’s fifth consecutive year with no female headliner. And somehow, Sheryl Crow’s billing is lower than Eminem, The Killers, Muse, Future, Bassnectar, Sturgill Simpson, bon iver, Khalid, Kaskade, and Alt-J. In the past, Bonnaroo, which is owned and operated by Live Nation, has kept quiet about complaints not only of a lack of women on their bills, but allegations of sexual assault. In May, the L.A. Times spokewith music markete Sara St. Hilaire about the experiences she’d had at the festival.

“This guy was creeping up on me and groping me, and I had to get away,” she told the Times. “One time a guy even lifted up my shirt in the crowd,” she continued. “There’s a sense of community and ‘we’re all in this together’ that gets misconstrued at festivals. I remember being younger and not understanding that kind of thing as sexual assault. Society raises everyone to think ‘boys will be boys’ and it gets excused.”

Bonnaroo‘s website offers some helpful tips on how to protect yourself while attending the festival including, “Be aware of your surroundings. Trust your instincts. If you’re uncomfortable, move on” and “Don’t go it alone. Travel in pairs and stay in well-lit areas.” Lastly, “Date rape drugs are real. Don’t take drinks from strangers. Also don’t set your drink down and pick it up later.” It all sounds like a bunch of victim-blamey BS to me, TBH.

In the companion section, “Avoid Causing Harm to Yourself,” they speak to would-be predators saying “Remember, ‘no’ means ‘no'” and “Monitor yourself. Some people cross the line without realizing it.” It’s almost as if Bonnaroo is telling their fans, “We get ityou didn’t MEAN to assault someone, but hey, accidents happen.”

This year, Bonnaroo is actively courting “woman-identifying Bonnaroovians” at SheROO, a camp “full of activities and offerings uniquely tailored to Bonnaroovian womenour playful spirit, love of music, and positive drive to empower one another.” And while that camp says it will donate “a portion of the proceeds” to Tegan and Sara’s Foundation for LGBTQ Girls and Women, the overall festival does not read as women friendly (or LGBTQ friendly, for that matter) at all.

In fact, Bonnaroo’s track record with LGBTQs is also debatable. In 2015, when Tennessee Governor Bill Haslam signed a bill into law that allowed therapists to to refuse LGBTQ clients, many artists were cancelling shows in Tennessee or donating full proceeds from their performances to local LGBTQ organizations. While tweeting that they were “deeply disheartened” by the bill, the bookers decided to keep the festival in the state, saying, “Bonnaroo will continue to be a force for promoting and embracing openness and acceptance. We have forged a strong bond with the TN community and intend to use our voice to champion equal rights for everyone everywhere. We hope that our fans will join us in radiating positivity in the face of this unfortunate ruling.”

So what will it take to change how Bonnaroo operates, which is to say, creating an experience catering to non-straight cis men? Tegan and Sara Tweeted they believe it will come from the fans and the media.

“The festivals don’t seem to be under much external pressure to do much about this imbalance,” they said.

I think there will need to be a movement within the fan world and the press to truly change this. The festivals don’t seem to be under much external pressure to do much about this imbalance.

As conversations of #MeToo, #TimesUp, and other demands of equality for women, LGBTQs, and other disenfranchised groups and minorities are being had in the public sphere, it’s not only important that this translates into the music industry and music festivals, but imperative. Creating safe and inclusive experiences should be a priority, not an afterthought, and especially not something willfully ignored year after year.

My suggestion, based on Tegan and Sara’s: Skip Bonnaroo and donate directly to Tegan and Sara’s foundation. Then tag the festival in a social media post (bonus: tag your favorite music-focused outlet, too) letting them know that instead of a portion of the $50 the LGBTQ women would have received as part of the camp’s proceeds to will instead receive it entirely, benefitting women, LGBTQs, and women musicians who consistently hire and play with other women.

Requests for comment from Bonnaroo have gone unanswered as of publishing.