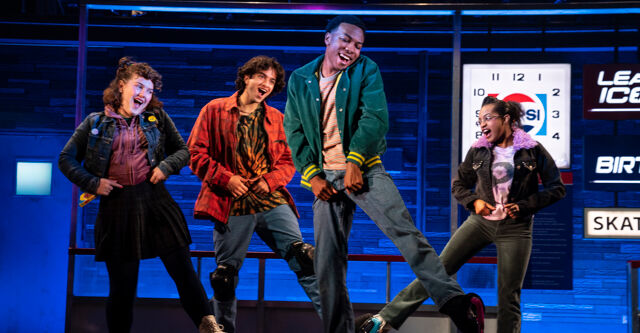 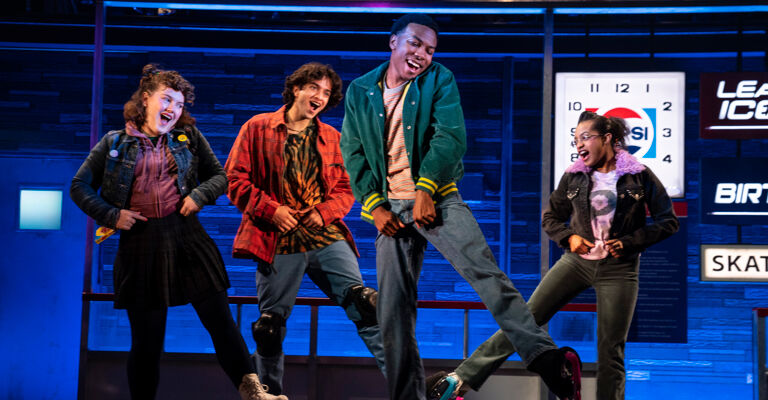 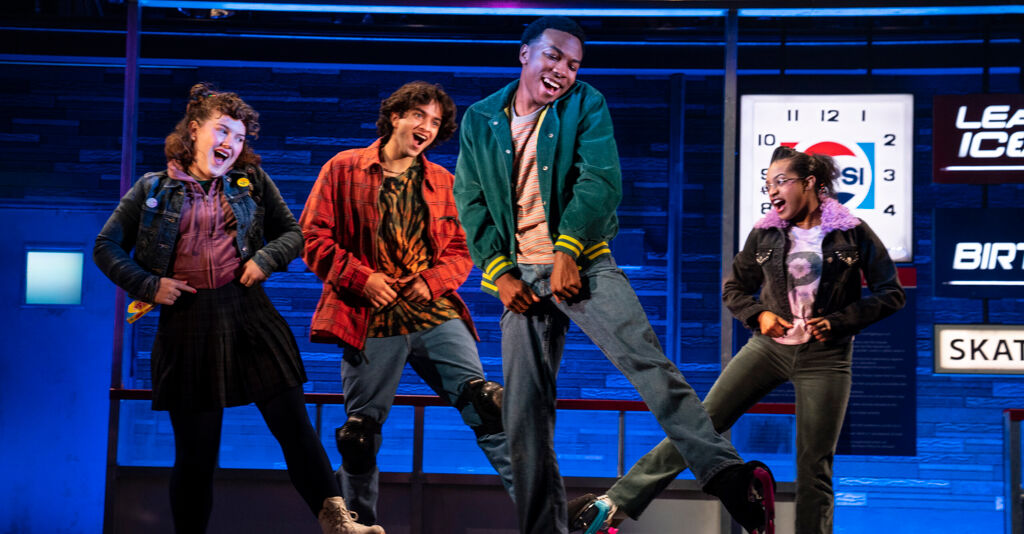 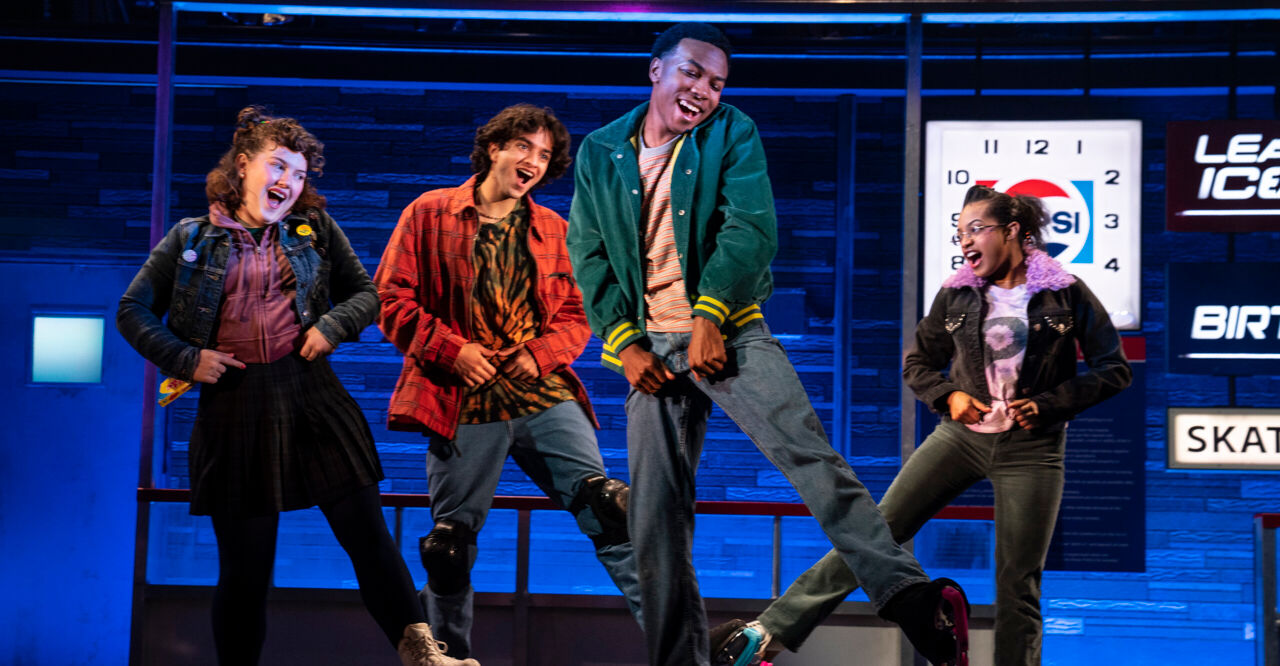 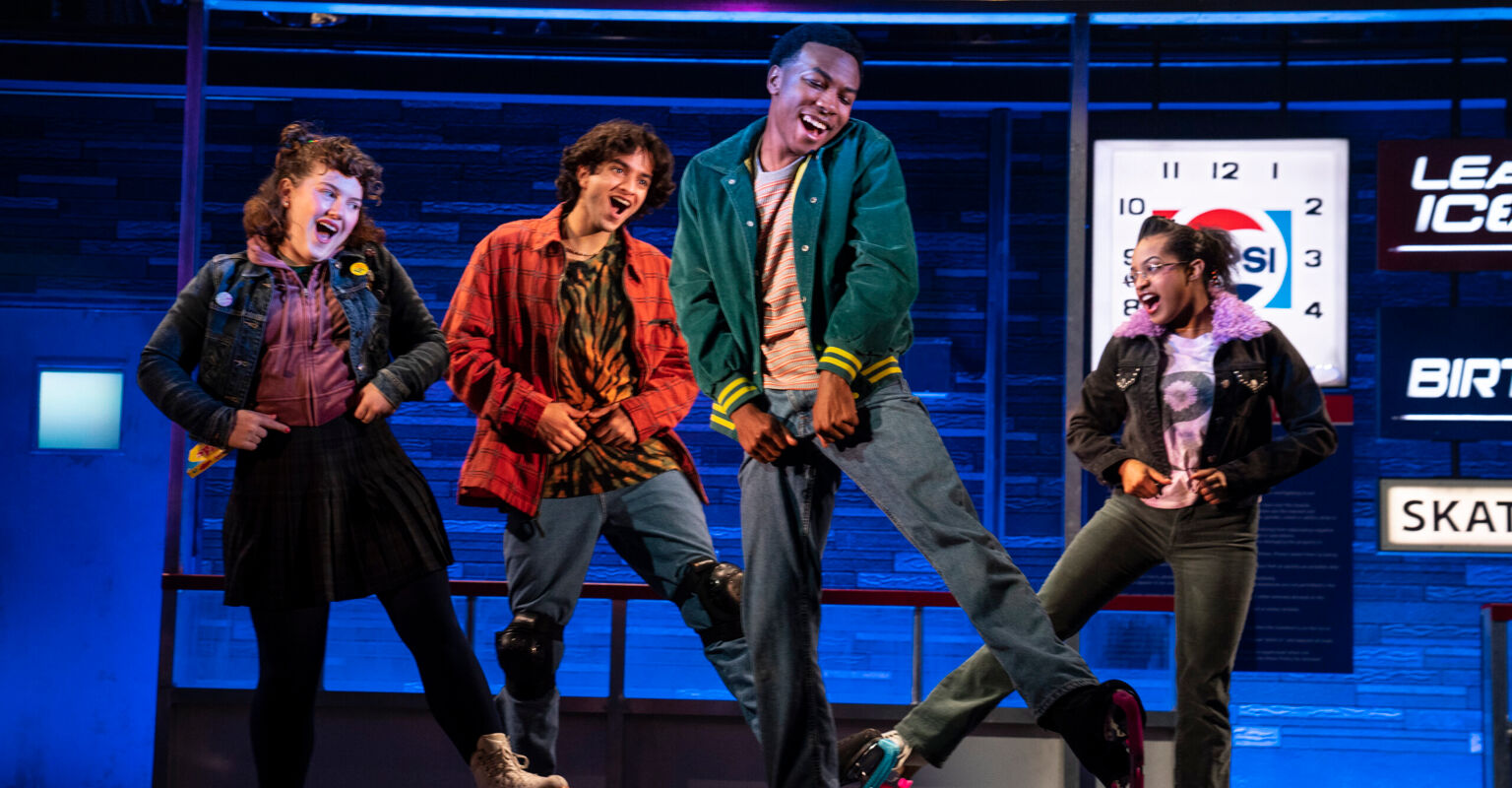 I missed the top step by just a few inches, but it was enough to send me tumbling across the linoleum floor, the contents of my Trapper Keeper spilling down the hallway.

Richard Vojticek had been taunting me in the lunchroom for weeks. The culmination of his pursuits: a multi-level chase through Mayfield Middle School resulting in a bruised leg and ego, along with the requisite public humiliation from dozens of 8th graders. I thought bullying was part of the deal when you’re creative, quirky, and enjoy show choir more than football. I didn’t have the vocabulary to identify as gay at the time. It was the 1980s, at the height of the AIDS crisis, and the word for this pre-teen was associated with a hollow-faced Rock Hudson, AZT, and a future of discrimination.

Kimberly Akimbo, the new Broadway musical about a 16-year-old with a degenerative disease in which she ages at four times the average rate (with plenty of laughs, believe it or not), includes a Greek chorus of four intertwined teens who crush on each other and offer a decidedly rose-tinted retrospective on queer teen identity.

Featuring a book by David Lindsay-Abaire and music by Jeanine Tesori (Fun Home), Kimberly Akimbo purposefully avoids the trauma tropes associated with coming out. There’s still plenty of unrequited love among the quartet, but their energy is equally focused on perfecting their show choir routine.

“If we wanna go to States then we really need to step it up — the harmonies, the ography, the costumes —” says Delia (Olivia Elease Hardy), assuming Martin (Fernell Hogan) could make their Motown-style costumes. “Why would you think I could design costumes?” he asks. An unspoken beat follows, telling the audience exactly what they need to know about who’s thinking what about whom.

Director Jessica Stone navigates the foursome’s delicate dance of self-discovery (with actual choreography by Danny Mefford), which complements the journey of the musical’s lead character. Kimberly (captivatingly played by 63-year-old Victoria Clark) also confronts a world that doesn’t understand her. Kimberly’s family is consumed with their own problems, including an alcoholic father, Buddy (Steven Boyer), hypochondriac mother, Pattie (Alli Mauzey), and deadbeat aunt Debra (Bonnie Milligan), who create a trifecta of self-absorption, leaving the terminally ill teen with no alternative but to claim her own happiness.

Kimberly begins to feel romantic rumblings when she partners with a tuba-playing schoolmate (Justin Cooley) for a science project, his unintentional tone-deafness emerging when he suggests they use her disease as the basis for their presentation. The teens reappear at the skating rink, in the library, and eventually, as part of a madcap check laundering scheme that aunt Debra ropes them into to pay for their sequined show choir costumes.

The foursome uses their developing powers of persuasion to align with their romantic interests, but the star-crossed crushes fail to materialize, and Debra finally intervenes.

“You’re smart kids, but not the most intuitive, so let’s just nip this in the bud,” she says. “Straight-gay-straight-gay. We done?” They stand silently until she chimes in, “If I’m wrong, someone speak up.” No one does.

Inside the Creative Process

“Honestly, it’s something I didn’t even really trip about the fact that it was there because it’s addressed so naturally. From our opening song, it’s just really light-hearted,” said Cooley, who paused his college education to make his Broadway debut. “I love that it’s not about the drama of it all but really about beautiful, fun, teen love and exploration. And it’s special to me at this age to be a part of something like this.”

Milligan, who starred in Broadway’s Head Over Heels (featuring the music of the Go-Go’s), playing a princess who discovers that a Prince Charming is not what she desires, says that director Michael Mayer was also intent on delivering a positive spin on queer love.

“Michael said he didn’t want to see a queer love story with trauma,” says Milligan of the 2018 production. “He wanted the character to fall in love, not realizing it’s a possibility because of the circumstances, and then all of a sudden, the discovery is pure joy. ‘I didn’t get to see that. And I want to see that and not tokenize it in a way.’”

“And so here we are, our show is set in 1999, and it was so funny talking to the kids because it is so different how we talk about our sexualities or our identities now. Kids are more comfortable; the world is — hopefully — more welcoming. I remember telling Nina White, who brilliantly plays Teresa and is in love with Martin, she was like, ‘How would I not know?’ And I said, let me tell you a story.”

“I was in high school, and my best friend, who’s now married to his husband — and they have twins and it’s beautiful — I just I loved him and he was artsy. And we went to the NSYNC concert where he hand-painted leather pants, and I didn’t know.” Milligan said. “And I had been doing community theater. I have met lovely gay men in my life. I knew what sexuality was. And yet, not him. He’s just ‘artsy.’ And Nina was like, ‘Wow.’ And I said, yeah, so it’s possible. When you’re young, and you have your feelings, you don’t know. We are so much more open about talking about our identities now. You know, 1999 … it was a little harder. And so we’re embracing that time, but with love and care.”

Lindsay-Abaire had originally written Kimberly Akimbo as a play with several successful regional productions and an Off-Broadway premiere. However, the script only showcased Kimberly’s core family — the teens’ addition was new.

“Honestly, those kids were my friends in high school,” said Lindsay-Abaire. “Like I just put my friends on stage, and their sexuality was just very matter of fact. There wasn’t an overt agenda.”

Tesori, whose Fun Home was nominated for the Pulitzer Prize and won the 2015 Tony Award for Best Original Score, recognizes that the evolution of queer narratives has exponentially changed in recent years.

“We did talk about a little of it because I think the intentionality and the responsibility,” Tesori recalled. “It’s very tricky because of the constant commodification of trauma that surrounds people of color and queer stories. We’re just now getting to more abundance of stories that contain, you know, the Netflix special where you see queer representation inside rom-coms. Was that possible five years ago? I had never seen it.”

“I think when you first start writing, at least when I did, it’s very confessional,” Tesori said. “It’s very based on — I think about my ninth-grade poetry — well, I burned it all — but then you get to the parts where you can explore the joy and the spectrum of experiences. Every time that we start something, it’s a question of why are we writing it? Why are we bringing it to the stage? And how is it going to hit its time? So we touched on it to ensure that we were very wide-eyed about that and then moved on.”

Kimberly Akimbo plays on Broadway at the Booth Theatre.