Perched atop a scrappy outdoor stage in a billowing dress of tarp and tape, performance artist Oozing Gloop’s visceral energy whipped up the crowd — and, accidentally, whipped out his dick. What may have been a wardrobe malfunction became a part of the show as the fully-untucked Gloop roared on about, among other things, wealth disparity and revolution as the crowd roared back in approval.

It was a startlingly appropriate sight to behold and signaled the disruptive, raucous undercurrent that helped electrify Bushwig’s first-ever foray into Berlin’s drag scene. Setting aside the usual two-day spectacle of drag they host in Brooklyn every year, the organizers hopped the ocean and settled in with the German city’s infamously wild queer community for a 24-hour festival of art, drag, and DJ sets that were as diverse as the crowd that packed the canal-side venue at Ipse.

Months ago, when Bushwig announced the festival’s foray into European waters, it became a cause for both celebration and concern among the queens in Berlin, whose drag community has cultivated an internationally-tinged scene. Talk of commodification of culture clashed with the very real desire to capture wider audiences and continued straight into the festival.

As performers from cities as far-ranging as Paris, Berlin, Helsinki, and Britain got ready backstage and traded greetings and some well-natured shade, excitement to perform for such a massive crowd mixed with a palpable frustration over a lack of adequate payment for the high-quality performances that brought Bushwig to Europe in the first place. “I don’t like that they charged €30 for a 24-hour party and barely paid their artists,” Austin Fagan of the Berlin-based FlaminGogos noted. “But as artists, unfortunately, we all make sacrifices for exposure.” 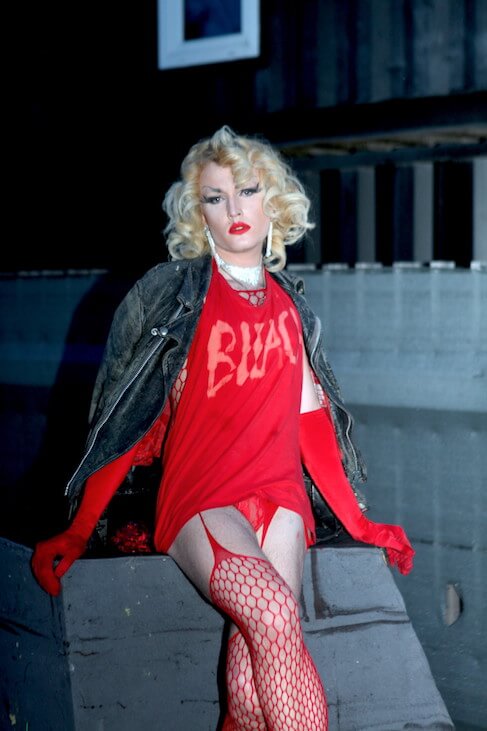 This thematic element of sacrificing payment that went toward bringing talent like RuPaul’s Drag Race winner Sasha Velour to Berlin in exchange for establishing a stronger community of international performers may have created a tension, but it ultimately gave way to a festival unlike anything the city has seen. As FlaminGogos member Ruby noted, “Bushwig means that so many of Berlin’s queens and drag performers are able to come together and celebrate each other under one roof and that doesn’t happen very often. We should be celebrating that what we do is being recognized enough for us to celebrate together on a bigger platform.”

And, for many, it became a platform to give their fellow queens a taste of what they’d cultivated in their own cities or communities. “It was my first time performing outside of Finland so it was huge,” Helsinki-based Vertti Vesala said. “I was able to share my art and talk about Finland’s amazing rising underground drag scene.” For Berlin-based entertainers like Cher Nobyl, who organizes a monthly performance art showcase aptly called Queerdos, Bushwig was representative of what she had grown accustomed to within the city’s thriving queer nightlife scene. “Parties are meeting spaces where otherwise isolated people come together and find safety,” she explained. “These are the community centres where queers start new ideas or create new families. Here no one will inquire about your past or question your identity construct.”

While the drag shows and DJ sets were often legendary, the chaotic creative energy that Bushwig had cultivated was palpable. Between outfit changes and trips to the bar for another drink, a visible bond was forming as people exchanged contact information and traded stories about their own communities. It was an idea that Gloop, after posing for a photo atop a pile of monster truck tires, was all too ready to dissect as he attempted to tape his tuck one more time. “Even if there are certain negative things about the way that it’s been organized, the bottom line is that us seeing ourselves come together to create these spectacles allows us the space to reflect on the organizations we have,” he said in his mile-a-minute intellectual dialect. 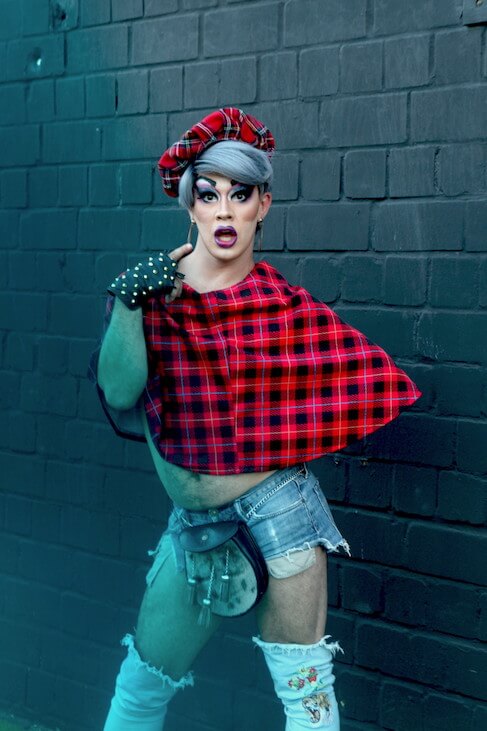 “It’s a moment and a space in which many different narratives come together. It’s also a situation in which drag is really shown to be able to be an engine of cultural material and worth. There’s a possibility here for a global hybridization to occur and to bring in a lot of disruptive energy.” Or, as Paris-based performer Parisienne Sasazuka asked after her performance, “You can whine on how drag has become a little bit mainstream, but isn’t that what we are fighting for?”

Finding out about drag had, after all, given them an outlet to explore the kaleidoscopic nature of their identities, and for many, that exposure came from the drag legend RuPaul’s now-infamous reality competition. With an armful of Emmys, Drag Race has become intrinsically tied to the drag scene and from that, it’s no stretch to say that New York City has become the drag community leading the pack thanks to a three-season streak of wins from Bob the Drag Queen, Sasha Velour, and now Aquaria on the show’s regular seasons. Across the ocean in America, drag communities have, at least in some part, become molded by what happens on that show, and so too has Bushwig’s Brooklyn-based festival, which is why the jump to Berlin has become so refreshingly necessary.

Situated in a city that has been at the forefront of European LGBTQ culture for decades, the drag scene here has become a melting pot for experimentation that feels far-removed from what’s happening on VH1’s hit drag show. “Berlin doesn’t have the same relationship or response to it,” Pansy said of Drag Race. “This allows for a much more open, loose, and sometimes messy interpretation of what drag can be.” It’s a statement that, coming from the Berlin-based queen, holds a metric ton of weight, given that she’s been producing drag shows in the city for over five years and witnessed firsthand the evolution of drag throughout the city.

Yet, even for queens who haven’t built their careers in Berlin, the kinetic energy of this fabled German city became the talk of the festival, with out-of-town performers like Paris-based Sasha Kills describing it as “rough and DIY” and the city’s own FlaminGogo member Valentin Braun summing it up as “experimental, non-conforming, questioning and interdisciplinary.”

As day stretched into dusk and hundreds of people settled into the space, the performances became a testament to that experimental, non-conforming, DIY spirit — and became a celebration of European drag as a whole. While death drops did occur sparingly, the crowd reveled in performance art showpieces and expertly choreographed dance sequences that elicited just as many screams of “yas” as they did cheers for powerful testaments to the transgender and gender-nonconforming communities that are often overlooked within the larger LGBTQ community.

By the end of the night, as hosts Olympia Bukkakis, The Real Housewives of Neukolln’s Cheryl, and Gieza Poke introduced the likes of Bjork-favorite Hungry and Sasha Velour as the final performers, not even the sweat dripping from thousands upon thousands of pores could stop the energy from shaking Ipse’s walls. It was a moment that solidified what Sasha Kills had observed earlier, saying: “Queer energy in Berlin is truly off the charts.” As Velour gave thanks to the drag community that had cultivated such an unforgettable night, the crowd filed outside where the buzz in the air was unmistakable. Far removed from the conventions of other cities, the drag shows gave way to DJs and dance floors as the clock stretched towards 3AM. For the queens and queers who had gathered that day, the night was only just beginning.