Master of None’s Lena Waithe became the first black woman to be honored for comedy writing at the yearly award show. During her acceptance speech for co-writing “Thanksgiving,” Waithe thanked both her girlfriend and the LGBTQ community. Donald Glover, the creator and star of Atlanta, was the first black man to win Best Comedy Actor in 32 years. Before Riz Ahmed took home a statuette for The Night Of, no Asian actor had ever won an acting Emmy. Ahmed is of Pakistani descent.

But one show that wasn’t able to join in the revelry was one of the year’s buzziest breakouts. Brown Girls, a web series about the friendship between a black woman and her queer Muslim best friend, went home empty handed at the Creative Arts Emmys, which are held on a separate evening. The trophy went to Los Pollos Hermanos Employee Training, a Breaking Bad spinoff.

After hitting the web in February, the show became a national trending topic despite almost no promotion and a very limited production budget. Even before landing a nomination, Brown Girls secured a development deal with HBO. The show, which was created by Fatimah Asghar and Samantha Bailey, hopes to follow in the path of Issa Rae, whose web series Awkward Black Girl would lead to the breakout hit Insecure. That show is now in its second season. 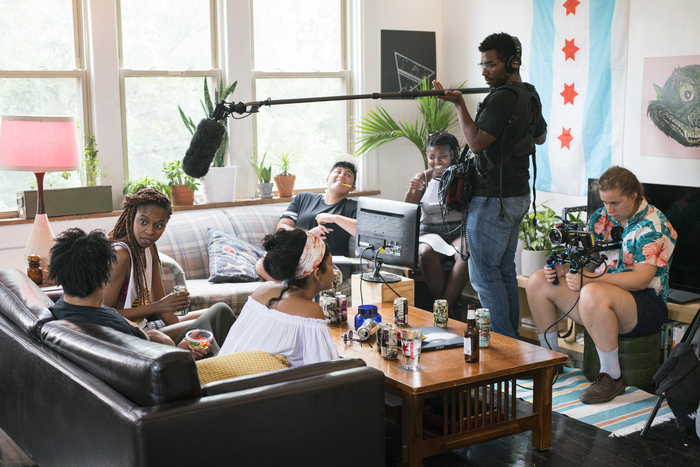 Part of Brown Girls’ success has to do with the innovative platform that helped give it life. Its distributor, Open TV, is the brainchild of Aymar Jean Christian, a Northwestern professor who has birthed a revolution in independent queer television. Christian first became involved with Brown Girls at a table read hosted by Asghar earlier this year.

After page three, Christian tells INTO that he was “hooked.”

“Fatimah’s writing is so real and engaging,” says Christian in a phone interview. “I had complete faith in their project from day one.”

Part of what appealed to him about the script is that it served as a long-overdue rejoinder to HBO’s own Girls. The Lena Dunham-created program is set an alternate-reality Brooklyn in which people of color are virtually non-existent, although that issue improved somewhat after the show became a lightning rod of cultural critique. In contrast, the entire cast of Brown Girls is non-whiteas are many of the members of its crew.

Christian says that the reason Brown Girls has resonated so profoundly with its audience is that the show offered women of color the “complex humanity” so often denied to them.

Asghar, the daughter of Pakistani parents, learned from a young age that TV provided limited choices for Muslim people. The South Asian characters she grew up seeing on the silver screen were damaging stereotypes, most often portrayed as terrorists. When you become used to “not being counted” in media, Asghar says, that erasure can have a profound impact on your feelings of worth. 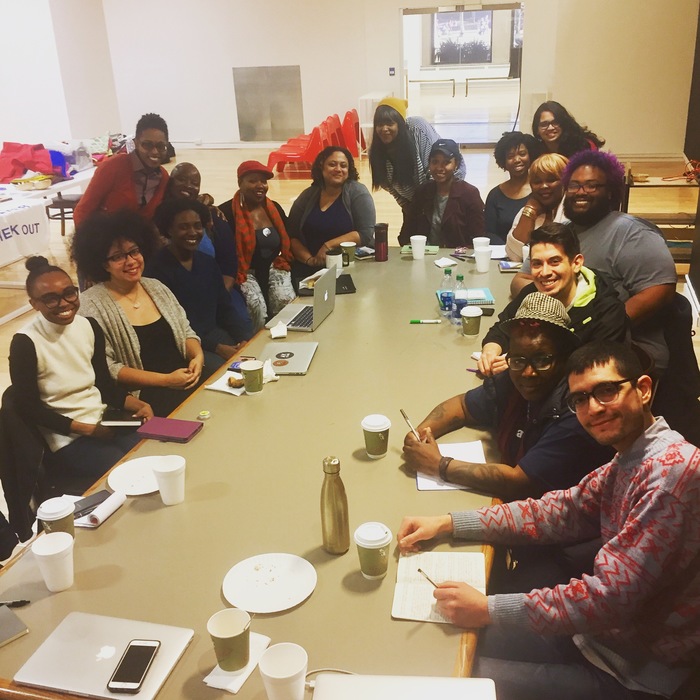 “They can really cause a lot of self-hate,” Ashgar says. “If I had something that I watched as I grew up that made me feel less alone, it would have made me feel a lot more humanlike I wasn’t on this journey by myself.”

What made the partnership with Open TV special, she claims, is that Christian is extremely “hands off” with the programs he shepherds into existence. During the initial read, he gave some minor feedback on the script. M Shelly Conner, whose Quare Life series is set to debut on the platform in 2018, says that Christian had one note for her show: Make it shorter. The original pilot script was intended as a half-hour program. He advised that 10-minute episodes would be more digestible for a digital-first audience.

That level of creative freedom is practically unheard of, as Conner points out.

“I’m always being told that [my work] isn’t black enough or it’s too black,” Conner explains during a phone call. “It’s not queer enough or it’s too queer. With Open TV, I haven’t had that experience at all. They understand that people like us exist, and therefore, characters like us need to exist.”

Christian says that Open TV, which was developed as a program through Northwestern, was originally going to focus on developing pilots. His first was Nupita Obama Creates Vogua, which Christian wrote and directed. It starred many of his close friends. But while working on that show, Bailey approached him with a different project. She had just wrapped You’re So Talented, a show about a struggling actress navigating her 20s. The production team needed funds to get their footage edited, and Christian stepped in to help.

“Once I realized that I could be distributing entire series that were produced by intersectional creators, I knew I needed to do a network,” he claims. “That’s how Open TV was born.”

But Christian says that the demand for an internet-based platform like Open TV was born out of necessity. Despite the historic diversity showcased at this year’s Emmy ceremony, statistics from within the TV industry aren’t encouraging. A 2016 report from Variety found that 80 percent of all showrunners are white men. Despite the success of shows like Empire and How to Get Away with Murder, actors of color account for just 11.4 percent of all leads on broadcast television.

Christian says television is particularly limited when it comes to queer representation.

“We see so many cisgender gay and lesbian people and not nearly enough trans or gender nonconforming people,” he says. “We almost never see trans or gender nonconforming people play themselves. It’s always cis people who are cast. That’s such a disservice to the talent within those communities. I know so many people across gender spectrums who could get big audiences if they only had the investment, production, and marketing.”

That’s where Open TV comes in. The network hopes to address those issues by creating space for communities that are historically underrepresented. Every single one of its shows feature protagonists that are queer, transgender, or people of color.

Two Queens in a Kitchen is like Bell Hooks meets Martha Stewart: A rotating stable of hosts prepare a meal while they discuss topics relevant to the LGBTQ community, including intersectional feminism, race, and the role of self-care in activism. Christian is a frequent guest. The T explores the friendship between a white transgender woman and her black best friend. The yet-to-be-released Brujos is about four Latino academics who are in a coven. 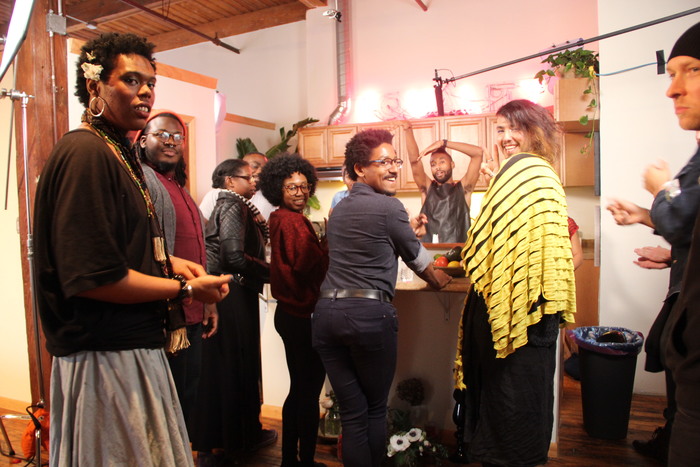 Two Queens in a Kitchen

The T creator Bea Cordelia says that the show, which is based off her relationship with her best friend, features “full-bodied portrayals” of identities often reduced to stereotypes.

“In the first episode alone, you see a young trans woman on a hookup, with her parents, at work, and with her best friend,” Cordelia tells INTO in a phone interview. “You normally don’t even get more than one side to a trans character, that side is the butt of a joke. It’s sad that’s considered radical. It should be common sense.”

Perhaps the most unique and revolutionary thing about OpenTV is that its creators are free to take their shows elsewhere. The network signs a non-exclusive contract with talent. When HBO announced that it would be optioning Brown Girls in June, OpenTV didn’t make a dime off the deal. Should the show get picked up, the platform will not receive a cut of the profits. Christian describes his role as a “nonprofit incubator,” someone who can help “creators of that initial form of investment to get them to take it to the next level.”

That ascent is not without its challenges. The trans web series Her Story, which was passed over at the Emmys in 2016, has yet to land at a network. Angelica Ross, who co-stars in the acclaimed YouTube show, says there has been interest from execs. But it’s important for Her Story to find a studio “who will allow [the show] to tell the story the way that we want to.”

Asghar says that giving marginalized communities the space to tell their own stories makes business sense for networks who want to stand out in the age of Peak TV. But for LGBTQ viewers, the opportunity to reach a wider audience means so much more.

“Television gives us permission to be able to exist,” says Asghar, who claims that a show like Brown Girls would have been a “game changer” for her as an adolescent coming to terms with her queerness. “I really hope that when people watch the web series, especially if they’re younger, it can feel that way for them. I hope they don’t feel like they’re all by themselves.”