If you’re a gay horse, a troubled teen girl, or interested in becoming one of 52 owners of a Midwestern horse sanctuary/vacation home, then Buffalo Bailey’s Ranch for Gay Horses, Troubled Teen Girls, and Other: A 90-Minute Timeshare Presentation may be exactly what the subprime mortgage broker ordered.

Having premiered in New York in January, Buffalo Bailey’s Ranch… returns to Brooklyn’s The Brick Theater this weekend before heading to Baltimore and Philadelphia for its tri-state “tour-de-timeshare.”

INTO sat down with Bailey Williams, the evil genius behind Buffalo Bailey, to learn how this bizarre, grotesque, and hysterical marketing presentation/after-school special/gay horse disco/mid-2000s period piece came to be.

What inspired you to write Buffalo Bailey’s Ranch for Gay Horses, Troubled Teen Girls, and Other: A 90-Minute Timeshare Presentation?

Oh, God. The real story is actually kind of sad, in a way. [laughs] So, about three years ago I was not in the best place, emotionally. I was working as an associate [theatrical] literary agent, and I had stopped writing. And I was sort of becoming increasingly depressed by watching my friends do theater on Facebook, like, watching people promote their shows and write things and get awards and stuff, so I was like, sort of crumbling in a social media-type jealousy. And it was really hard to exist online.

So one night, I think I drank a bottle of white wine [laughs] and I googled myself out of self-pity, and I found this woman named Bailey Williams. And she was a cowgirl and a rodeo princess and a playwright and an international humanitarian. She had these amazing rodeo princess photos that were taken where she’s wearing, like, this bejeweled cowgirl hat and these fabulous pink Western shirts that were incredible. And I’m like, “Look at this woman. She’s so happy, she’s doing theater, she’s helping people, she lives on a ranch. I’m not going to be me anymore online, I’m going to be her. I don’t want to be in my pajamas on my bed. I want to be a fabulous rodeo princess.”

So I just started Facebooking as this alternate personality that was also a real person. Originally, I was really just posting a bunch of horse quotes. I think I was trying to be, like, a very, very basic “horse girl.” But then like the gay horses moved in, and then the wolverines, and I think I lost a couple of fingers, and my eyebrows fell out. And then it just sort of spiraled out of control from there.

A couple of months later, [director] Derek Smith and I were at a friend’s birthday party, and Derek was like, “Let’s make it a show.” And I said OK.

What did playing Buffalo Bailey on Facebook change for you, the “real” Bailey Williams?

There was something super freeing about presenting myself publicly as Buffalo Bailey. I didn’t have to sort of wallow in my own despair, not being recognized as a playwright or something. I could sort of lose myself in this fantasy of being a rancher with gay horses and the troubled teen girls. And then it sort of turned into a story, and that tickled me in a completely different way. It was like I got freed from my own ego, in a lot of ways.

It also helped me understand, on a deeper level, that we’re all performing something for social media, that it’s all a ridiculous performance, that nobody’s this shining beacon of perfection and success. Everybody is making shit up. And the ridiculousness of what I was making up helped me sort of see how other people were approaching their successes on social media, basically.

And also, there’s just something really, I don’t know, magical, about giving up. I know so many people who, as soon as they were like, “Fuck it, I don’t care what anyone thinks,” [laughs] made something cool and successful. As soon as you’re like, “Well, obviously, since conscious striving isn’t being rewarded anyway, I’ll just let whatever weird goo exists in my subconscious bubble up,” that’s the good stuff. 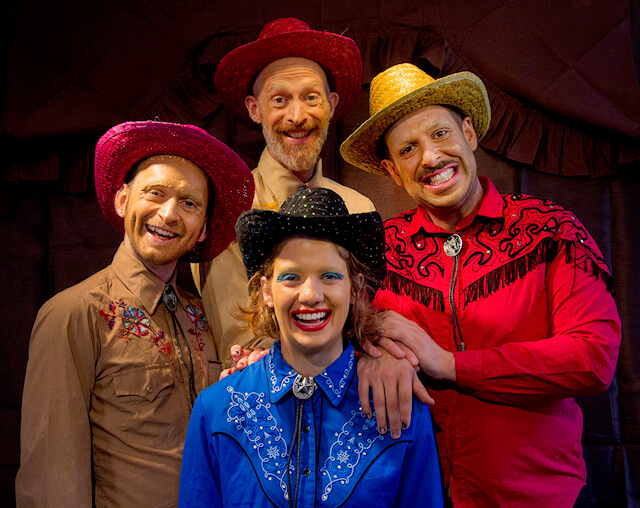 How did you adapt Buffalo Bailey as a theatrical character?

That was actually a challenge. When Derek first asked me if I wanted to turn it into a show, I really didn’t see how it could be a show, because the magic for me was being able to disappear in my computer and just have like this weird social media façade that nobody knew quite what was going on.

But then, with Derek’s help, we we sort of picked out parts of the story I had created on Facebook. Like, there’s these gay horses, and there’s 20 of them. And the ranch is also a place to therapize troubled teen girls who get caught smoking behind the middle school or something. And then there’s Buffalo Bailey’s enemies, which are the wolverines. They had to come into the show. And then there’s the idea that the ranch itself is a timeshare property, and that’s where we started with, was, like, “Wouldn’t it be cool if the show was a timeshare presentation?” Like, we were selling the ranch.

Derek went to a ton of timeshare presentations as a kid, so we watched a bunch of videos from those and we talked a lot with Alex Rodabaugh about his preoccupations, and for some reason, we were all kind of similarly obsessed with the mortgage crisis as being the reason behind all of these financial woes.

Also, over time, just operating as Buffalo Bailey on the Internet, my own problems were seeping into it as well. It was like we were feeding each other. Buffalo Bailey was making me weirder, and I was also giving her a lot of my problems, like financially, and my frustration with how many jobs I had, and stuff like that. So the finances were like the drama behind it, for sure. We all knew that money was the motivating factor.

Why structure it as a timeshare presentation?

There’s something just really, deliciously, terribly American about [a timeshare], isn’t there? Like, [laughs] you go into this room and you basically have to sit there for a couple of hours while people aggressively sales-tactic you into spending money that you don’t have on a vacation home that you likely won’t use. And I love sort of the con-man element and the revolving cast of characters, because when you’re in a timeshare presentation, there’ll be multiple people that come in and try to sell you. And there is something really theatrical about that.

Like, it’s the American Dream. It’s like, “Everyone can be a homeowner! You just have to purchase this weird apartment in the Las Vegas Wynn Hotel for seven days. You’re a homeowner! You own a vacation home!” So absurd, the obsession with home ownership and what it means to people. And the fact that it’s completely unattainable now for so many people in this world. I don’t know. It seems like the perfect way to sort of exorcise all these feelings we have, [of frustration] with the American Dream, the way life is expected to be: You get a job, then you can buy a house, and you have healthcare, and you’re just totally fine.

And I think it helps that Buffalo Bailey believes in that that dream. She believes in it for herself, not for anybody she’s selling a timeshare to. So there’s multiple dreams at play there.

The play is set in 2006, right, just before the real estate bubble explodes, right?

Yeah. So there’s a lot of “wink-wink, nudge-nudge” about that, about how she bought the ranch for basically nothing with subprime mortgage rates that they were handing out like candy in the mid-2000s, and it’s about to basically balloon, and the bank will foreclose on the ranch. And so the idea is like, sort of the ‘90s rom com plot, so like, if they can just do the pageant, they’ll save the ranch!

And it’s like, that’s not how the world works. The banks always win. You’re always playing the long con game set up by powers that are so much bigger than you.

What do you hope to leave your audiences with at the end of the show?

Ultimately, I would like people to leave with a renewed impetus to treasure their DIY queer spaces — like, their local performance venue, their shops, and stuff like that. But I think it’s also, “There’s no ethical consumption under capitalism.” [laughs] And to cling to the people you love and the places you love and do what you can to keep the gay alive. To keep happy. To celebrate. 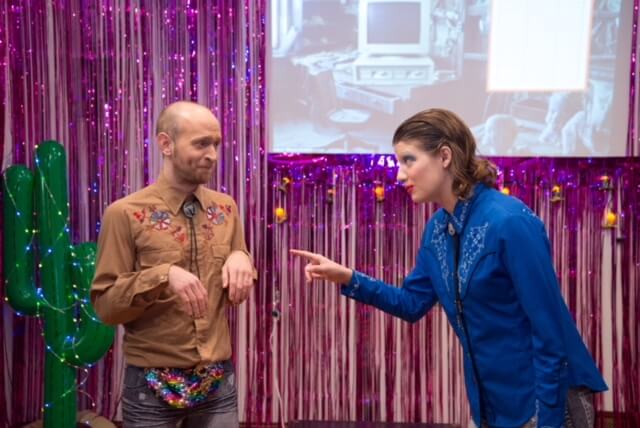 Or, like, our bodies are the real timeshares, in a way?

Yeah. Your body is the ultimate timeshare.

What’s next for you after this three-city tour?

Well, we’re actually all quitting theater. We’ve met a really wonderful group of people. It’s not a cult. It’s a group of likeminded people who are concerned about the challenges of climate change, and the way the environment is going, and basically, have provided us with an answer that we feel very satisfied with. So we are all moving to New Jersey to work with them on spreading The Good Word.

What is The Good Word?

Well, you’d have to come to a meeting to find out. We’ll be posting information about the meeting pretty soon. Or you can email me. Let me give you my special group email. If you want to keep updated on future meetings, you can email me at [email protected].

And we can publish that?

Yeah, 100 percent. And it’s all good news. Like, if you’re worried about climate change, the environment, war, social issues, what’s going to happen to your children when the oceans drown us all, you’re going to want to hear about this, because it’s really good news.

And it’s not a cult.

Yeah. Most importantly, it’s not a cult.

Buffalo Bailey’s Ranch for Gay Horses, Troubled Teen Girls and Other: a 90 Minute Timeshare Presentation is written by Bailey Williams, directed by Derek Smith, and features Jack Raymond, Alex Rodabaugh, Derek Smith, and Bailey Williams, with sound design and composition by Alex Kuncl. It plays at The Brick Theater, 579 Metropolitan Ave, Brooklyn, NY 11211, on August 10 at 7 p.m., and August 12 at 2 p.m. and 8 p.m. Tickets are $20. For more information on the show, as well as details on its performances in Baltimore and Philadelphia, visit buffalobaileysranch.biz.