For LGBTQ pro wrestling fans, it’s been fascinating (and frustrating) to watch the ways that mainstream federations have only just begun to slowly shift their stances on progressive politics, including their commitment to diversity and representation. But while traditionally conservative companies like the WWE have been hesitant to embrace queer audiences and performers, clever artists in the underground are way ahead of the game.

Enter Bunny Buxom: a New York City-based burlesque performer and producer. In her role as Commissioner of Rabbit Hole Productions, Buxom has created and curated a groundbreaking hybrid showcase which combines the narratological devices of pro-wrestling with the art of the striptease. Buxom has already held two wildly successful Tasselmania events and hopes to expand her endeavor even further in the future.

At Tasselmania 2, held in the dimly lit basement of DROM NYC on July 7, Commissioner Buxom jeered on the predominantly queer audience as she pitted talented dancers against each other in vicious striptease battles. After the dancers performed to the same song at the same time, audiences voted for winners of each duel. But the nefarious Buxom had plans of her own and manipulated the outcomes of the matches – that is, until her lovable assistant, Qualms Galore, turned on her to thwart the authority figure at her own game!

This felt quite unlike other burlesque shows, which generally present isolated, self-contained performances sometimes organized around a theme. But much like pro wrestling, Tasselmania presented a coherent narrative about betrayal and honor, in which the audience is encouraged to root for the underdog. The queer crowd was quick to embrace the over-the-top dramatic structure, perhaps already familiar with many of the tropes.

Buxom first came up with the idea for her chimerical experiment after attending her first live wrestling show with her partner and co-producer, rapper Schaffer The Darklord, she recalled.

“I had never watched [wrestling] before and suddenly I thought, ‘This is a thing.’ It’s a whole universe with a crazy fandom. From afar it sounds just like guys fighting in a ring. But it’s so much more: there’s a story, there’s theatricality, there’s costuming, there’s audience participation, signature moves,” she remembered. “I turned to Schaffer and said, ‘This feels like burlesque to me,’ and he responded, ‘Yeah, wrestling is the burlesque of sports.'” 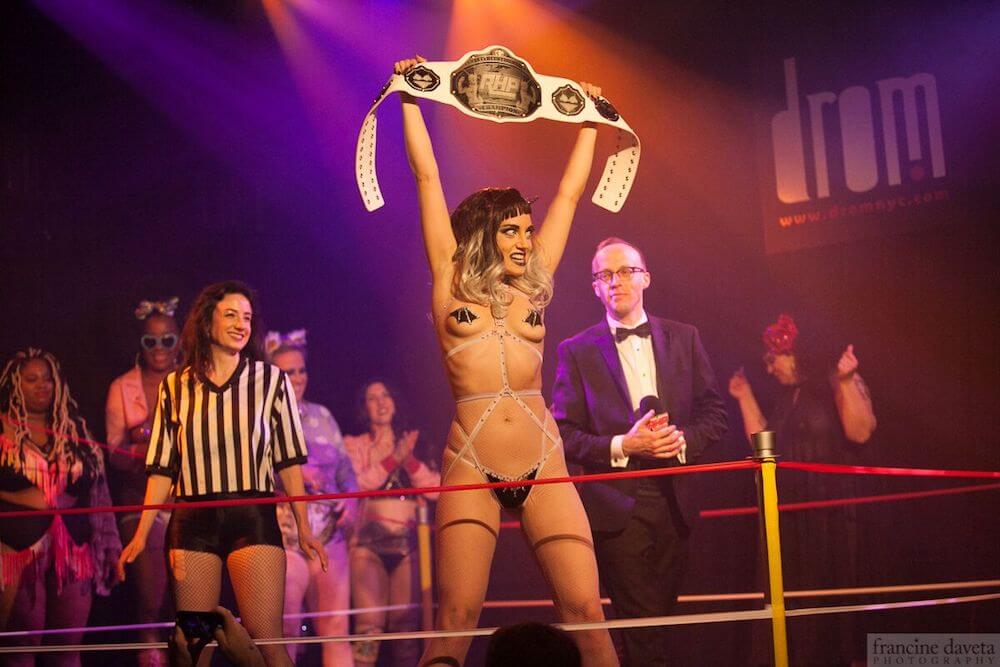 At first, it was unclear how exactly the show would take shape.

“We weren’t really sure if it was going to work,” Buxom said. “The idea of having two strippers perform at the same time, to the same song, in the same space – a lot can go wrong there. The audience may not know where to focus, and the performers’ egos could get in the way. But we’re lucky that everyone in the cast is awesome and gracious, so that didn’t happen.”

At Tasselmania 2, burlesquers arrived with their own fully-formed personas and ring entrances, delivered sniping promos against each, and formed covert alliances to outdo their enemies. The audience booed the heels (that’s wrestling slang for bad guys) and cheered the faces (good guys) as the alignment of each character became clear through video packages and mid-match antics.

Both wrestling and burlesque are often perceived as lowbrow art forms, both with penchants for glittery, over-the-top costuming and physicality. But given the obvious, campy similarities, it certainly seems curious that queer audiences tend to flock to burlesque but shy away from pro wrestling.

“[In burlesque] there is the idea of solidarity in a safe space and a safe mindset … We’re professional people who expose our bodies and in a sense put ourselves at risk because people still don’t understand the concept of consent. [Burlesque is] an understanding space where we respect boundaries and are open to mutual love. And that makes it easier for queer audiences to enjoy – everyone is welcome with open arms,” Bunny said. “[But] when I go to live wrestling events, I’m definitely a little physically uncomfortable. If I felt unsafe at live events then there must be other people who have an even harder time. I’m trying to escape reality at these shows – and I don’t want to have to think about that. It’s frustrating to have my fantasy encroached on by my fear.” 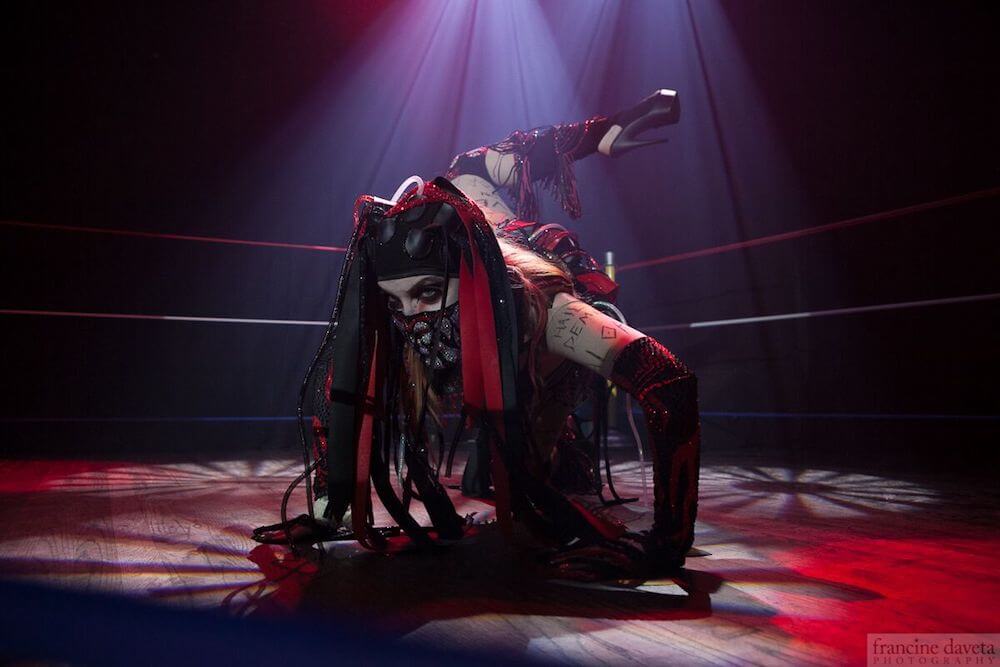 “I don’t know how to make those places safer,” Bunny continued. “It’s gotta start small, as simple as signs like at Comic-Con that say ‘Cosplay is not consent.’ Just something that instructs everyone to respect each other.”

Tasselmania arrives at a particularly strange time in pop-culture history: while our country’s politics careen ever-rightward, entertainment industries face pressure to at least seem more liberal. This dynamic is deeply complicated in the world of pro wrestling: despite donating millions to Republican organizations, the WWE has pledged to work harder on integrating LGBTQ talent into their products — and we’re just starting to see the results of that promise. But while the WWE drags its feet on actual queer storylines, Buxom’s production showed that LGBTQ people are ready and willing to embrace at least parts of the art form of wrestling itself.

For Bunny, who remains a huge WWE fan despite what she describes as the company’s “problematic” aspects, the answer to WWE’s questions about how to handle diversity are somewhat difficult to answer.

“When I produce a show, my mission statement is to represent all types of bodies and all types of people,” Bunny. said “Understandably, this is probably harder with pro wrestling because it requires a different type of training and different people who are interested. But it’s not hard to have more people on your roster who identify or look a certain way. I feel like it shouldn’t be hard to have fewer superstars who look like the stereotypical Victoria’s Secret fantasy. Add some more people of color and push them. That kind of variety and diversity is easily transferable to the queer community. Everyone is all different types of things [and] seeing yourself on stage in other performers is important. Have more superstars be open about their sexualities. Maybe produce a Pride event!”

The burlesque battles at Tasselmania often devolved from carefully choreographed routines into coquettish spanking or raucous twerking. Ultimately, it was the gothic beauty and classic dark-sided babyface Logan Laveau who emerged victorious and took the RHP Intercuntintenal Championship, posing devilishly at the center of the ring with her prize. The audience revived the classic “This is awesome!” and “Fight forever!” wrestling chants as she victoriously exited the stage. But who will be her next challenger?!

With the success of Tasselmania 2, plans are already underway for expanding the scope of the project.

“We’re in the works of setting a date for a Tasselmania 3 that coincides with Wrestlemania weekend!” Bunny said. “I’m basically building a roster. Logan has to come back and defend her title. Do we want more belts? Do we want to have a men’s match? Can we figure out how a tag team would work in this setting? We’re just striving to figure out how to make it more true to wrestling while keeping the burlesque qualities that make it so fun for us.”