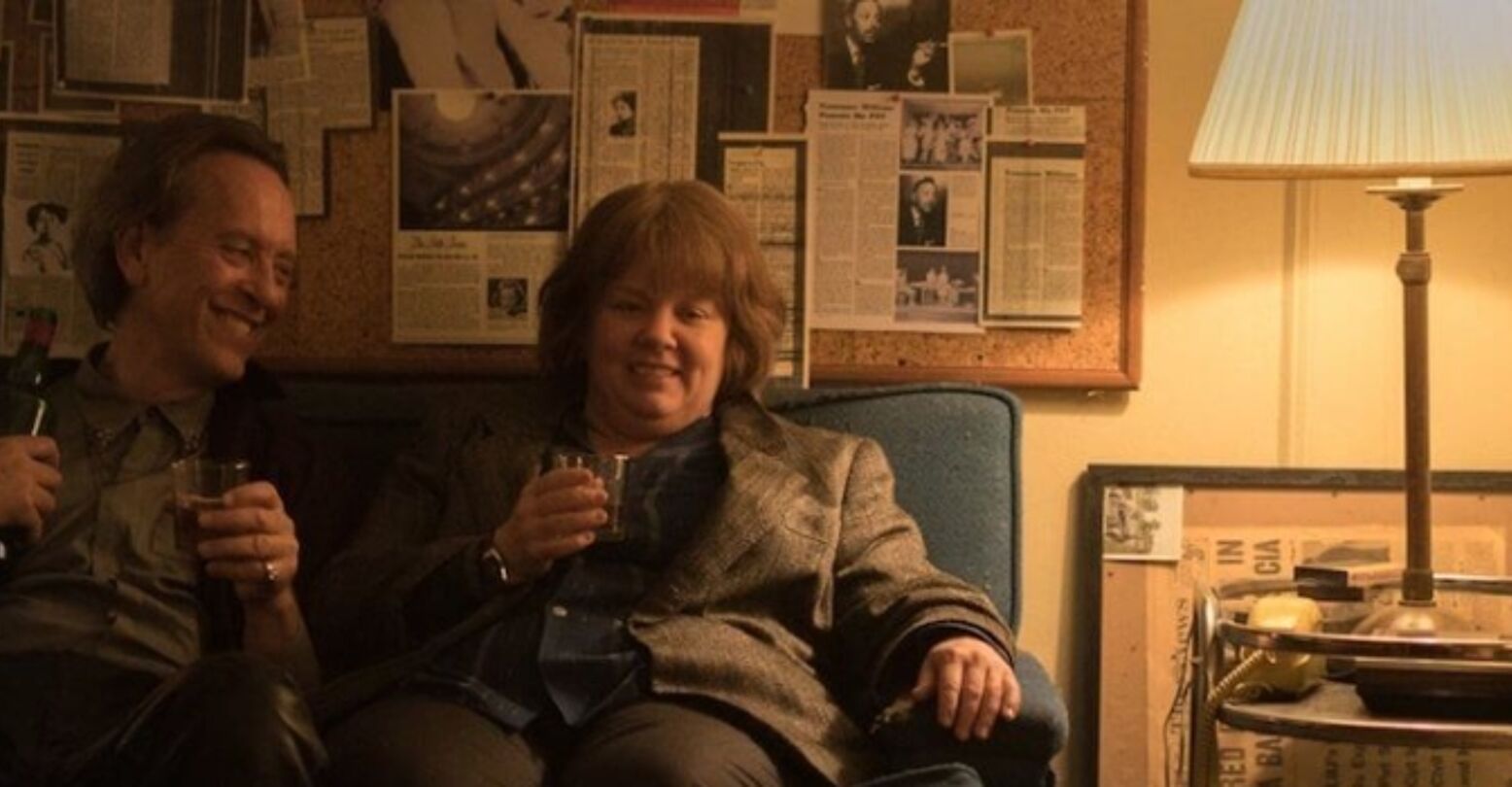 What is Can You Ever Forgive Me? Lee Israel, a biographer of famous and powerful women, is out of work. Her Estée Lauder biography was a critical and commercial failure, and her agent isn’t interested in her upcoming Fanny Brice biography. What is a woman to do when she can’t make ends meet through selling books?

She sells letters. Forged letters, to be exact, purporting to be from famous figures. What starts as just an added postscript to a dull letter becomes a fully fledged forging factory, with different typewriters for each writer, and different buyers for each letter. It all catches up to her, of course, but for a while it’s quite the thrill. As Lee herself says in the film, “In many ways, this has been the best time of my life.”

Who’s in it? Melissa McCarthy plays Lee Israel, in her single best performance ever. This is what fans of McCarthy’s from the Gilmore Girls days have been waiting for — not just the comic timing that’s come to define most of her post-Bridesmaids roles, but a deep gravitas. She’s joined by British character actor Richard E. Grant, who plays Lee’s best friend Jack Hock. I don’t want to spoil much more of the cast, because there are some joyous surprises — West Wing fans will particularly love who plays Lee’s ex — but suffice it to say this is a deep ensemble.

Why should I see it? For McCarthy and Grant, certainly, who both will likely find themselves on the Academy’s shortlist come Oscar nominations time. But director Marielle Heller’s film is far more than just them. This is a moody little portrait of New York City — particularly queer New York City — at a very specific point in its history. Can You Ever Forgive Me? is the kind of movie you can settle into and spend a while in. It’s chilly, but ultimately quite cozy once you get adjusted to the mood.

But how gay is it? Oh, it’s the gayest thing you’ll see this year. Lee Israel is a lesbian who embarks on a flirtation with one of her female buyers, and is still very much recovering from her breakup with a serious ex. Grant is also gay, and has a fling with a much younger man. Moreover, the film’s sensibility is remarkably queer. It’s got the kind of bitter warmth that feels way too familiar to me as a former gay New York resident. You know what I’m talking about: the camaraderie of reading your best friends, shading your nemeses, and doing it all over drinks at Julius. (New York’s oldest gay bar prominently features in the film, acting as the setting for multiple scenes.)

I can’t quite describe it; it’s just a familiar, wonderful feeling. Can You Ever Forgive Me? has a great story, but its mood and setting are, to me, its greatest strengths.

Is it a problem that neither McCarthy nor Grant is gay, and they’re playing gay characters? I personally don’t think so, but my friend Will Kellogg brought up the point that Gay Media and Gay Twitter sure did bitch a lot when the same happened for Call Me By Your Name. So why isn’t it a big deal now? Maybe it’s just that general reception to the film is fairly muted — or, as Will posited, is it because they’re not young, white men? In other words, do we only care when we’re thirsty?

I don’t feel like we know enough to make a judgment, but it’s an interesting thing to keep in mind as we move forward. It’s not just what do we care about, but when do we care about it that’s worth dissecting.

Is McCarthy still funny in this movie? Oh, it’s one of her funniest performances ever. It’s just an entirely different kind of comedy than you’ve come to expect from her. It’s dark, specific comedy. Her final joke in particular is such a howler, I’m still thinking about it weeks after seeing the movie.

How would you rank McCarthy’s other performances? So I haven’t seen all of them, but I’d say her best performances are in this, Spy, GIlmore Girls, and Bridesmaids. Then I’d rank, in some order, her work in the Saturday Night Live Lulu Diamonds sketch (iconic), The Heat, and the highly underrated John August sci-fi movie The Nines. I’d also cite among her best her small part in Go, plus her work in the short-lived ABC sitcom Samantha Who?.

That is far longer an answer than I thought I was going to give, but there you go!

Can You Ever Forgive Me? is in theaters now.