In a special TV edition of “But How Gay Is It?”, we seek to answer the biggest questions you have about Netflix’s newest show — including, most crucially, our titular question. Does the new series have any queer characters? Are there stories involving same-sex lovers? Which gay icons star in the show? We’re bringing you all that and more.

What is Insatiable? If you’ve heard of Insatiable, it’s probably for one thing: the petition circling calling for Netflix to axe it because of its fat shaming. Before a second of the show dropped on the streaming platform, Insatiable churned up a whole mess of controversy — a controversy that, having seen the show, feels a bit shallow. But more on that in a second.

Insatiable follows Patty, played by Debby Ryan, a formerly big girl who gets skinny after an incident and becomes a would-be pageant queen. The series is deeper than that — it’s really about the battle for Patty’s soul, as melodramatic as that sounds — but the overarching plot is pretty simple: Patty tries to learn a new skill or talent that will help her in the pageant world, her coach gets frustrated with her, and they get through it together.

There are also gay affairs, sex with minors, drag queens at a car wash, and more. But the tone of Lauren Gussis’ series (which was originally developed for the CW before moving to Netflix) is very light and wacky, even when dealing with darker subject matter.

Who’s in it? If you live in Los Angeles, chances are you’ve seen one of the billboards that announces that “Debby Ryan Is: Insatiable.” If you’re under, say, 22, this likely means something to you, since Ryan starred on the Disney Channel series Jessie from 2011-2015. If you’re like me, and slightly over that age barrier, you’ll likely be left scratching your head as to why Ryan is being sold as a name. But then you see that she has over eight million Instagram followers, and it all makes a bit more sense.

I was more familiar with the adult cast, including The Good Wife recurring star Dallas Roberts as pageant coach and lawyer Bob, and Ugly Betty nerd heartthrob Christopher Gorham as rival lawyer Bob. (Yes, they’re both named Bob.) Gorham is looking particularly daddy now, and spends most of the show either in a perfectly tailored suit or with his shirt off. So, I guess you know the show’s pretty gay already.

Why should I watch it? If you like the irreverence of Ryan Murphy’s earlier, lighter work — like Glee, Popular, and even Scream Queens — Insatiable is probably for you. It’s inconsistent, and even arguably poorly written at times, but coasts heavily on the charm of its cast and zany, anything-goes attitude.

I wouldn’t watch it if you’re just trying to get a rise out of the fat-shaming controversy, though. Honestly, the show isn’t either good or bad enough, nor is its treatment of weight thoughtful or egregious enough, to be worth the breath.

Let’s unpack that a bit. We’re in a time where people from marginalized groups have an increasingly large platform to call out the lazy, hurtful jokes and judgments that have continued unchecked for too long. I think that’s incredibly vital, and is challenging creators in culture to be smarter in their humor. I certainly have appreciated the ways gay-panic jokes have mostly gone the way of the dinosaur, while movies like Blockers have mined far richer comedy as a result. I do think there’s an element of “pick your battles,” though. I don’t love the way The Real Housewives of Atlanta cast repeatedly shames queer housewife Kandi Burruss for her relations with women, but I also recognize that expecting intelligent inclusion from The Real Housewives of Atlanta is maybe not the way to go.

So Insatiable just doesn’t quite seem worth the fight. And honestly? The controversy has given it publicity that it wouldn’t have had otherwise. It’s entirely possible that by trying to get it cancelled, petitioners have given it a better chance at future seasons than it had before.

But how gay is it? Okay, so some spoilers ahead. Turn away if you feel the need. 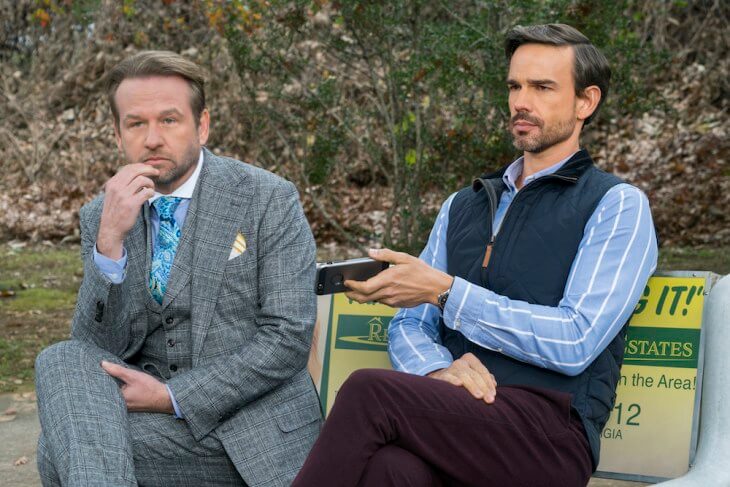 So there’s a gay undercurrent to the Bobs’ relationship — lots of rivalry tinged with attraction — but it isn’t acted on for most of the series. Then, in a crucial moment, they do, and the entire dynamic of the series changes. As a result, it’s a show that is queer in theme, in aesthetic, and in content. A triple crown of gayness!

That doesn’t make the series better, but it certainly makes it quite notable. And difficult to talk about without getting into spoilers, to say the least.

So … is the show good? Again, it’s just kind of mediocre. To pull back the curtain a bit: Netflix sent out the screeners for Insatiable at the very beginning of June. The series premieres Friday. The embargo for reviews broke Wednesday — two days before release. That doesn’t suggest the utmost confidence, to say the least. To compare: The upcoming fifth season of Bojack Horseman comes out on September 14, with the review embargo breaking a full eight days before. New Matt Groening Netflix series Disenchantment’s embargo breaks 10 days before the series drops.

That said, I don’t think Insatiable is that bad. It’s the kind of show you’d leave on in the background while doing other things. And honestly, in the era of Peak TV, we could use more shows like that.