What is Love, Simon?

If Call Me By Your Name was the prestige gay event of last year, Love, Simon is the commercial gay event of this year. Greg Berlanti’s adaptation of Becky Albertalli’s 2015 novel Simon vs. the Homo Sapiens Agenda has a fairly simple presence: Simon Spier is gay, and he doesn’t quite know how to come out. An unexpected, anonymous connection with another gay guy at his school, known only as Blue, inspires him to inch out of the closet. But before he has a chance to come out on his own terms, he’s caught emailing Blue by the school creep, who blackmails him with his secret. What follows is a remarkably mature approach to the stress of the closet, the politics of coming out, and more.

It’s still a teen movie, complete with a cute teen lead you’re rooting for, but Love, Simon is a bit deeper than it looks on the surface.

Nick Robinson, who you likely last saw in 2015’s Jurassic World, plays Simon, and he’s a surprisingly good fit. From the trailers, I expected that he’d feel too straight-playing-gay, complete with deeper voice, lack of any queer affect, and so on. But what works so well about his performance is that you can feel him wanting to be more gay, like there’s a discomfort in his heteronormative skin. Plus, he really sells the longing to just be with someone else, which is incredibly relatable during that early phase of coming out. You can believe that in a few years, Simon will be bopping around West Hollywood, getting hit up constantly on the apps, and having a gay ol’ time. But he’s not there yet, and the movie knows he’s not there yet.

The ensemble is mostly relative newcomers and oh-that-guys, as can be expected in a teen movie. Of particular note are the potential three Blues, played by Joey Pollari (American Crime season two), Miles Heizer (13 Reasons Why), and Keiynan Lonsdale (The Flash). Alexandra Shipp, AKA Baby Storm from X-Men: Apocalypse, and Katherine Langford, also from 13 Reasons Why, play Simon’s best girl friends, while Spider-Man: Homecoming’s Jorge Lendeborg Jr. is his best guy friend. Rounding out the cast are Josh Duhamel and Jennifer Garner as Simon’s parents. Garner is terrific in this, easily the best she’s been since Juno. She’s warm, kind, quirky she’s so loving, you immediately want to come out to her. 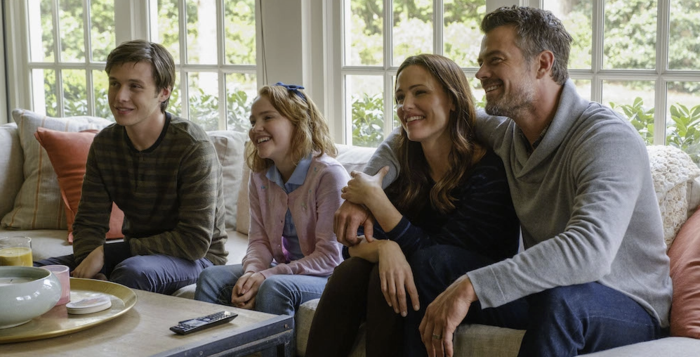 It’s really lovely! You’ll laugh, you’ll cry, you’ll be supporting the queer movie industry as it moves into the mainstream. At the box office, your dollar is your support, and Love, Simon is the kind of movie that deserves your support.

It is a solid Gay. Again, I was worried there would be a tinge of no-homo to all of it, a gay-but-not-that-gay vibe. And I was wrong about that. In addition to Simon and Blue, there’s Ethan (Clark Moore), an out-and-proud gay kid who routinely reads his classmates to filth. (At one point, he says a straight bully’s outfit looks like he was “gangbanged by a T.J. Maxx,” and I haven’t stopped screaming about it since.) I wish the movie had more time for him, but he was a new character for the film as-is, so I appreciate how much of him we get.

This is a commercial teen movie, so you’re not going to get the most impressive queer theory or experimental characters. It’d be unfair to expect that, frankly. But generally, I was impressed by how unafraid of its gayness the movie is. Is it a little white, a little homonormative, a little cheesy? For sure. But for the first big, studio film with a lead gay character, this is a solid first step.

OH BOY DID I. Love, Simon pulls at your heartstrings hard. I don’t necessarily think of crying as a good thing plenty of movies emotionally manipulate and inspire unearned tears. But Love, Simon’s heart is so big, it’s tough to be cynical. Best to just give yourself over to the good vibes.

Love, Simon is in theaters now.