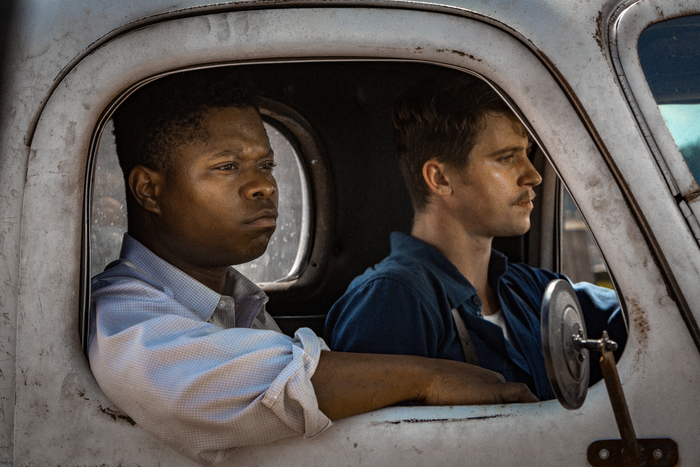 What is Mudbound?
Two families, both alike in geography but different in race, welcome home a World War II veteran. Upon their return, the vets experience battles with reentry, PTSD, and the racism you’d expect of 1940s Mississippi. The vets, Jamie McAllan and Ronsel Jackson, become friends during the war, but their friendship faces a tough road upon their return. One complicating factor: The black family, the Jacksons, lives on land owned by the white family, the McAllans, putting the Jacksons on even more unequal ground than their ethnicity already does.

Director Dee Rees, however, never gives in to that imbalance, instead spreading the narration of the film across three characters from each family. The result is a sprawling American epic that tells an all-too-familiar story in beautiful, brutal detail.

Who’s in it?
On the McAllan side, we have Jason Clarke, Garrett Hedlund, and Carey Mulligan interesting casting choices for their countries of origin. Hedlund is the only American, Clarke hailing from Australia and Mulligan from the United Kingdom. Through her casting choices, Rees has set up the McAllans as both American and representative of a kind of pan-global whiteness that has oppressed black people for centuries. It’s a novel choice, if a meta one.

On the Jackson side, we have Jason Mitchell, Rob Morgan, and, turning in the film’s best performance, Mary J. Blige. As matriarch Florence Jackson, Blige brings a tremendous warmth and heart to the film. She’s all but unrecognizable, fully transforming into Florence in a way that deflects any potential criticism of her casting as being a stunt.

Why should I see it?
From a cold, awards-obsessed perspective, this is one of the few films that has a chance of preventing a third #OscarsSoWhite debacle. Considering how good they are in the movie, one hopes Jason Mitchell and/or Mary J. Blige could find a way into their respective acting races.

From a warmer, cinephile perspective, Mudbound is an impressive fourth feature from Rees. Though the movie is sometimes too sprawling or too knotty, it manages to tell a complicated story with tremendous empathy for the people involved, if not for the era. At no time does Rees glorify the racist South; instead, she trains her camera on the people most affected.

But how gay is it?
As a lesbian director, and a black lesbian director at that, Rees’ voice is still a rarity in Hollywood. Her last two films, Pariah and Bessie, featured black, queer, female characters, and she told their stories with a masterful mix of gravitas and grace. That she tells this story effectively as well is a testament to her skill: She’s a gifted storyteller no matter what the sexualities of the characters.

But does a gay director really make a movie gay?
Great question! Quite frankly, Mudbound isn’t gay at all. That’s not the story here, nor was it the story novelist Hillary Jordan told in the 2008 book of the same name. But there’s tremendous value in supporting queer filmmakers even when their movies aren’t queer.

For one, the success of a movie like Mudbound shows once again that gay directors can tell more than gay stories. The fact that Rees’ biggest film yet is her straightest is both unsurprising and a testament that she’s slowly breaking into the mainstream. That’s not to devalue the importance of gay stories, of course; in fact, if Mudbound hits with viewers and the Academy of Motion Picture Arts and Sciences, it could give her a leg up in pitching future, gayer projects.

Will Mary J. Blige get an Oscar nomination for this?
My gut tells me yes. That category feels unsettled right now, with Allison Janney and Laurie Metcalf (for I, Tonya and Lady Bird, respectively) the only sure things. Holly Hunter has been predicted to get in for her work in The Big Sick for months, but that movie feels like a pretty distant memory as the year goes on. Blige will be battling for one of the other three slots with Hunter, Kristin Scott Thomas (Darkest Hour), Melissa Leo (Novitiate), and Octavia Spencer (The Shape of Water). In a better world, Tiffany Haddish would be in the conversation for Girls Trip, too, but that film is also fading in the awards conversation.

Should I see this in a theater or on Netflix?
Up to you. I’m not someone who cares very deeply about this debate. The lines between television and film are blurring, and both venues are valid for watching movies. However, there are certain scenes that are lit dimly they don’t play very well on TV.

This movie wasn’t very gay. When are you talking about Call Me By Your Name?
Next week, when it hits theaters in New York and Los Angeles. But I’d also like to hammer this message home: Support queer filmmakers, and not just the white men. Luca Guadagnino, Todd Haynes, Ryan Murphy all great. But Dee Rees represents the future in a gorgeous, surprising way. Mudbound deserves your attention every bit as much as Call Me By Your Name does.

Mudbound is in select theaters and streaming on Netflix now.