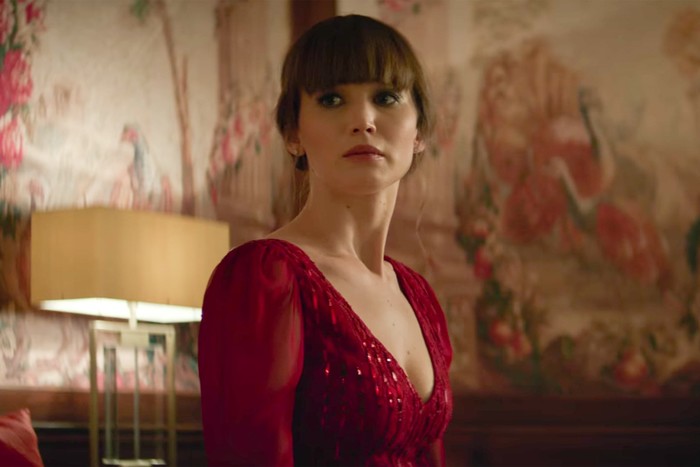 What is Red Sparrow?

I’ll be honest with y’all: I saw this movie less than 12 hours ago and I can’t really tell you what happens. But I will try to explain as best I can. For you, the readers.

Dominika Egorova, a Russian prima ballerina, sees her career disappear in a flash when her partner in a performance misses his mark and jumps onto her leg, irreparably damaging it. Her uncle, Ivan, decides this is her chance to become a spy a “sparrow,” or an agent primarily trained in the art of seduction. As Dominika herself tells her uncle: “You sent me to whore school.”

Anyway, Dominika falls in love with a CIA operative named Nate Nash (which honestly sounds like a Randy Blue model’s name). He tries to convince her to turn rogue, while her uncle keeps her on her toes. The whole movie is like a tug-of-war over Dominika’s loyalties, except she dies if either party starts winning too much.

Likely the reason you’ve heard of Red Sparrow at all is because star Jennifer Lawrence, who of course plays Dominika, has been on an aggressive press tour for the film. (The press tour has been better than the movie, for sure.) Joining her are Belgian hottie Matthias Schoenaerts as Ivan, and perpetually serious man Joel Edgerton as not-porn-star Nate Nash. Charlotte Rampling, Oscar nominee a couple of years ago for 45 Years, gets the hilariously thankless role of “whore school” taskmistress Matron.

But in the most bizarre turn, Mary-Louise Parker plays Stephanie Boucher, the chief of staff to a U.S. senator who feels like she waltzed into this movie by accident and never really tries to alter her performance to match Red Sparrow’s tone. And God bless her for it.

I didn’t say you should.

Okay. Why shouldn’t I see it?

Red Sparrow is nonsense. I mean that literally: It does not make sense. The entire concept of the “whore school” (a phrase I will keep repeating because it is the funniest thing that happens in all of Red Sparrow) is a bizarre premise for a blockbuster. The result is that you have Charlotte Rampling talking about seduction techniques and rubbing one of her student’s nipples in front of the class. But somehow, as strange as it is, it’s the best part of the movie. It’s so outlandish and unusual, which is more than I can say of the actual espionage plots of Red Sparrow. Everything about the post-school story feels generic, like someone found a stock Russian spy movie script and did some find-and-replace on the names.

Put simply: When a “whore school” is the most interesting thing a movie has going on, you know it’s bad.

But how gay is it? I’m so mad that it is somewhat gay, because that feels like a level of approval that this movie doesn’t deserve. Yes, there are two queer woman characters Dominika’s roommate Marta, and Parker’s Stephanie. We find out they’re together when Dominika discovers photos of them in Marta’s room; unfortunately, Marta dies a very grisly death shortly after, so we never get to find out if Dominika ships them.

Stephanie is a fucking trip, a deadpan drunk who briefly turns Red Sparrow into a comedy when she arrives on-screen. Unfortunately, she, um, exits the narrative quickly, shall we say, and the movie is worse without her.

There’s also a gay prisoner used as a test of sorts at the “whore school.” When one of the students calls him a degenerate, Rampling’s Matron insists that they “must’nt be judgmental.” #lovewins

How is Jennifer Lawrence in the movie?

Coming off her excellent performance in the divisive mother!, it’s a bummer to see Lawrence regress. She fails to give Dominika any kind of internal life. She’s so dour even before her accident that it lowers the dramatic stakes of the injury. What should be a life-changing event feels like just another inconvenience. When Dominika has some kind of angry outburst, it doesn’t feel like an organic expression of her emotion. It just feels like Lawrence reading her lines or doing her blocking a little more ferociously.

Moreover, Lawrence’s accent in this movie is a mess. I’m not a stickler for precision on this Nicole Kidman gave one of the best performances of 2017 in Big Little Lies with an accent that I’d generously call “stoned Australian pretending to be British.” The key is that the acting has to be so unforgettably great that you don’t mind the distraction. With such a thin performance behind an accent that alternately sounds Russian, American, British, and German, Lawrence’s slippery dialect is likely all you’ll be able to focus on.

Is there an inappropriately sexual vibe between niece and uncle in Red Sparrow?

There sure is! And I honestly couldn’t begin to tell you why it’s necessary!

Is there anything good about Red Sparrow?

Dominika serves some fire looks. Her wigs are bad, though. If you’re not wearing [good] wigs, then you’re not doing drag, Dominika!

Red Sparrow is in theaters now.