As a band, they’re a Gordian knot of contradictions: they’re called Shopping, but they write catchy songs subtly criticizing consumerist culture, some of them earworm-y enough that it wouldn’t surprise anyone if they ended up in an Apple commercial selling you some overpriced iPhone accessory. Eager fans can purchase a “Shopping” bag at their merch table, a goofy, unintended visual pun that nevertheless captures the band’s strange position within a world so driven by buying stuff.

All the above could make the band seem too earnest, ironic, or even cynical. But that’s their beauty, and precisely what cuts through any over-analysis of their work: Shopping is exciting. So damn exciting that they’ll get a crowd, at first stiff and only liable to sway a few inches in each direction, gradually bopping up and down to their ping-pong, dance-punk rhythms.

“This is so much fun!” someone spontaneously shouted at a recent show. They were right.

At the end of the day, that’s the band’s main M.O.: making sure their fans, many of them queer or people of color, or both, are having a good time. It’s a remarkable feat, considering that they’ve been touring relentlessly since their third album, The Official Body, came out in January. INTO caught the group in Chicago at the tail end of their 26-date North American tour, one that saw them driving, on average, at least four to five hours a day with a show almost every single night. (Typical day-long drives would stretch from Phoenix to San Diego, or, even worse, Atlanta to New Orleans.)

But if you didn’t know any better, you’d think they were just getting started: the music was taut and high-tempo, and the band was clearly in a celebratory mood, happy to see their fans coming to life in front of them.

Amidst those infectious grooves, you might not even notice the subtle ways in which they challenge the world we live in, at certain moments even tackling the band’s namesake activity. On “Why Wait?” off the band’s 2015 release Why Choose? they ask , “Why pay?/ For what you never even needed.” Elsewhere on the song, bassist/singer Billy Easter asks, “Why choose? When I just want it both ways.” Somehow, the words simultaneously capture the seductive powers of an advertising slogan and a protest chant, almost begging the question: why can’t things be better, and why can’t we just be happy in spite of it all anyways?

Such an approach speaks directly to the group’s political outlook. While they’re ready to see a world transformed, they’re also quick to emphasize that they have no intention of belittling anyone else’s way of life. Buoyed by a wholesome queerness that just wants to make sure everyone is happy and safe, they’re not afraid to make subtle moves to challenge those that might hurt them, like on the track “My Dad’s a Dancer,” when Easter provocatively asks, “Would you like me, if I looked like you?”

“We’re not like, speaking as if from on high, you know, as if we’re outside the system,” says guitarist/singer Rachel Aggs. “We’re fully in it, and dealing with it, and processing it, and also aware of all of our weaknesses, and the fact that buying stuff feels really good sometimes. You kind of feel gross, but also you’ve got to look after yourself, so fuck it. It’s all messy.”

A perfect example of this is the band’s perspective on cell phone usage at their shows. The group recognizes that they’re likely to start filming things when they’re bored, but they don’t bemoan their fans for experiencing the show in that way. Still, they joke that they want to make their shows a safe space for “everyone but iPhones,” and that they’re happy when they see their fans put down their phones and become a little more present, getting lost in the groove.

“It’s not about pointing the finger,” says Easter. “Let’s just get everyone else to dance, and then at least we can get some of our frustrations out in that way, ‘cause we alone do not have the power to change it.” 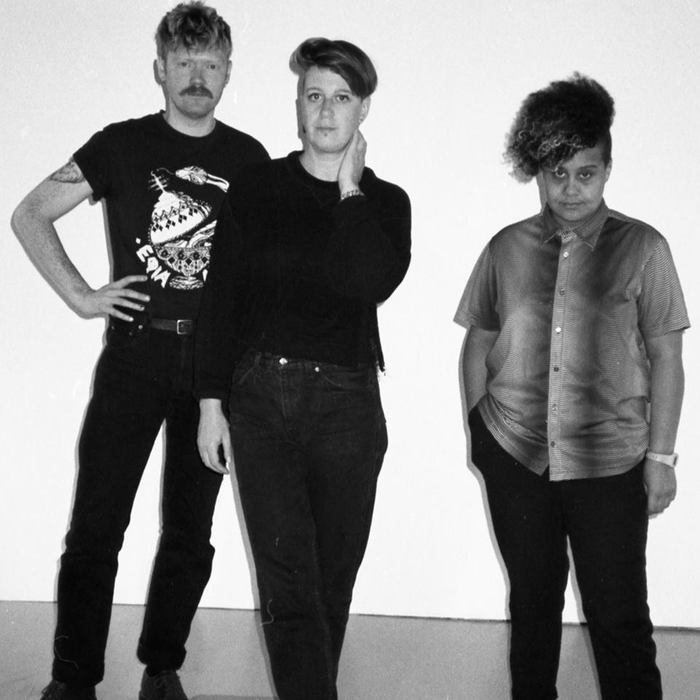 The group’s roots are in Britain’s DIY scene, where they’ve all been in different bands over the past several years. They remain deeply invested in the DIY ethos–selling their own merchandise, sticking around after the show to talk to eager fans. Above all, you can sense that the band’s not in it for money or fame, merely for the chance to enjoy themselves and share an exhilarating experience with their fans.

“I can’t imagine making music any other way,” says Milk. “You just wouldn’t be invested in it.”

“It just wouldn’t have the same energy,” Easter adds.

Most tangibly, there’s not a group that shares the stage more cohesively. There’s a tight-knit connection that the group shares that comes across live, as the group trades off vocal duties or uses call-and-response to heighten the energy levels. You can sense the emotional investment they’ve made in their work and in each other. Or, as Aggs puts it: “The camaraderie is what keeps us going.”

Though the casual listener might miss on some of the group’s embedded concerns, on stage they emphasize what’s important to them. On two separate occasions between songs, Aggs asked for queer audience members to make some noise, as well as expressing her support for any other punks of color in the crowd. You probably won’t catch the group sloganeering anytime soon, but there’s no mistaking where their priorities are: taking care of their community, putting on a good show, and pushing back against the shitty world we live in, even if it’s not immediately apparent.

“We’re not that kind of political, crass or dogmatic, but who isn’t political?” Aggs asks. “It’s probably not that interesting if it’s not at all engaged, made by people who are very comfortable in their lives and are not marginalized in any way.”