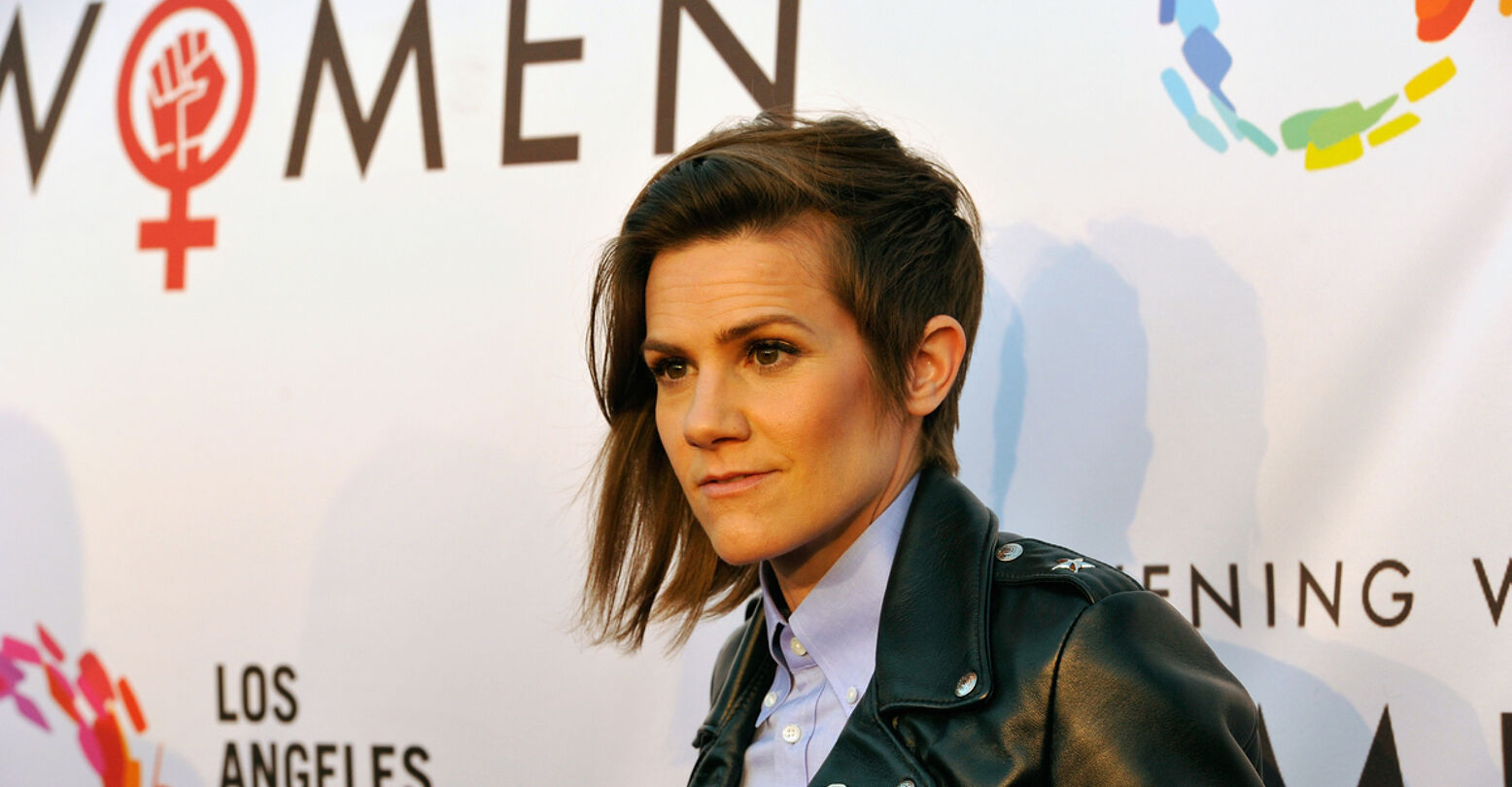 In this week’s LGBTQ, Jeffrey Masters sits down with Cameron Esposito to talk about the daily stress of having to come out to strangers, why she feels like David Bowie when she wears makeup, and she describes her own “gender fuckage”.

Cameron Esposito is a standup comic, actor, and writer. She co-created and co-starred in the television show, Take My Wife, with her wife, Rhea Butcher.

You can listen to the full interview with Cameron as podcast or read the interview below.

Jeffrey Masters: Thinking about your comedy and the way you present, I imagine you don’t have to come out to people very often.

Cameron Esposito: Do I have to come out to friends or people that I meet through the entertainment industry, probably not. Do I have to come out to a bagel salesman? Sometimes. You go into a bagel shop and you’re like, “Oh, can I get two of the poppy seed?” And then they say, “Oh, are you buying that for your boyfriend?” And then you’re like, “Uh. What do I do here?” Do I come out to the bagelier? Or do I just let it go? And then how do I come out? “Actually, it’s my wife!” It’s the simple stress of that. So I still have that thing, which I think a lot of queer people can relate to, those tiny moments.

Jeffrey Masters: I can’t relate to that actually, because in my experience, they immediately clock me as being gay. It’s all of my queer female friends that have to continually prove and let people know that they’re queer.

Cameron Esposito: You know, I’ve never had anybody say that to me before, but I believe you and I think that’s the other side of the coin. What I have often thought to be true is if you’re a young dude, you’re labeled before you label yourself. People call you names or stuff you into a locker, then for women, we get none of that, because sportiness doesn’t really indicate anything. You’re allowed to have sleepovers with your best friend, you can touch each other. Massages are fine. There are a number of things that are fine when you’re a young woman that don’t come with being labeled. So when you’re a young man, you’re spending your whole life like, “Please don’t label me.” And when you’re a young woman you’re like, “Could somebody just label me?” And then it just continues for the rest of your life.

Jeffrey Masters: Because you could be a tomgirl and be straight, but there’s not a male equivalent.

Cameron Esposito: Absolutely. This is also the root of homophobia; this is the root of transphobia. We patrol what masculinity and maleness is. I wish I had better words than masculinity and maleness, but I don’t right now. We patrol it so much that any deviation from that is disgusting, because the worst thing that a man could be would be a woman. Right? That’s why people make jokes about penetrative gay sex, because it’s like, “Why would you want to be a woman.” So, homophobia and transphobia all have roots in misogyny. If we just liked women a little bit more and if we just let dudes be themselves a little bit more, I really think we could massively reduce violence in this country. This is getting so serious. Are you ready for how serious that got? But it’s true.

I’m a pretty serious guy. What a serious asshole you have to be to be so serious about joking around that you make it a profession, that you’re like, “I want to get so good at joking around with friends that I write it word for word and sell it as a trade.” That’s ridiculous.

Jeffrey Masters: We have a strong history of queer female comics. I’m thinking about Rosie, Wanda, Ellen, Margaret. When you were growing up, were you aware and following them?

Cameron Esposito: Well, when I was a kid living in my parent’s house, I wasn’t allowed to watch Ellen or Rosie.

Cameron Esposito: I don’t know why. I don’t know if it was that they knew about them or if it was that they knew about me. When I was on my own in college and with my first girlfriend, we really loved Margaret Cho. She’s actually the first comic I ever saw perform live. We would use old-fashioned Netflix to get Margaret Cho’s specials or Ellen’s specials delivered.

Jeffrey Masters: I could be wrong, but didn’t all of those women come out after they became successful?

Cameron Esposito: All of them, yeah.

Jeffrey Masters: Does that make you part of the first generation of queer women who became successful while also being out of the closet?

Cameron Esposito: Yes, the only other person who might be my contemporary is Fortune Feimster. Those women gave us this; they gave us this opportunity. I also know Lily Tomlin has spent decades working for LGBTQ rights, but I don’t know when she first started talking about it. Either way, there was certainly a delay between when somebody thought they were marketable and when they wanted to tell you who they really were, and that just doesn’t exist anymore for us.

In comedy, there used to be mainstream rooms and then the gay circuit. The gay circuit was on cruise ships, or at clubs and bars in Provincetown or Palm Springs or West Hollywood, and then there were comedy clubs, and you couldn’t be out and play comedy clubs. You had to pick. That’s why Ellen wasn’t out, because she wanted to be on the Tonight Show.

Jeffrey Masters: I assume you’re talking about it with your wife, but is there ever a moment of, “Hey, can we just figure this out before you talk to an audience about it?”

Cameron Esposito: You know, I don’t know. I mean, not really between us. There are certainly things I don’t share on stage about our relationship. But that’s kind of the thing: when you are dating a stand-up comic, you just have to know that they’re going to talk about their life.

Jeffrey Masters: It’s radical to hear a queer woman talk about having kids, let alone seeing a queer woman pregnant in the media.

Cameron Esposito: Dude, I know. Do not delude yourself for a moment and think that we haven’t in our most disgusting and cynical moments looked at each other and been like, “It would be great for the career.” Like, “I do not want to have a baby grow in my body. But wouldn’t it be great?” It would be great. People would notice.

Jeffrey Masters: You’ve called yourself a guy as we’ve been talking. Your wife is beginning to talk about their gender and being genderqueer. I wonder, are you also thinking about that?

Cameron Esposito: No, I just am a lucky enough person to have had many really evolved conversations with people on many different parts of the spectrum. I think the thing that Rhea [Butcher] and I have in common and why I’m happy calling myself “this guy” or whatever is that I’m in the middle of the spectrum. I don’t know if that meansI think some people are using the word non-binary. That doesn’t necessarily feel

Cameron Esposito: Not not sexy, I guess it feels new and I already think I know who I am, so adding words doesn’t feel important to me right now. That doesn’t mean it’s not important for other people. I really see myself as a woman, but the haircut that I used to have is all of it: it’s long and short and weird and rock and roll and nerdy and the past and the future. All of those things. I don’t really see myself as any one thing.

This interview has been edited and condensed. The full LGBTQ interview is available as a podcast here.