“This is the wedding gift I really wanted,” coos Griselda to her female lover on her wedding nightwhile her new husband is asleep in the other room with her children.

Tonight on Lifetime, Cocaine Godmother tells “the real life story” of Griselda Blanco (Catherine Zeta-Jones), a bisexual 1980s Colombian drug lord and associate of Pablo Escobar. Zeta-Jones is an odd casting decision as she is not, in fact, Colombian. She has, however, played bisexual characters before, in both High Fidelity and The Haunting, but mostly as a titilating mention benefiting the men in both films.

Unfortunately, the Lifetime biopic is more concerned with histrionics than, you know, dialogue, reality, or treating queer women like people. This movie is literally the “Medellin” movie from Entourage, except all of Vince’s scenes were cut and replaced with tragically embarrassing lesbian content. 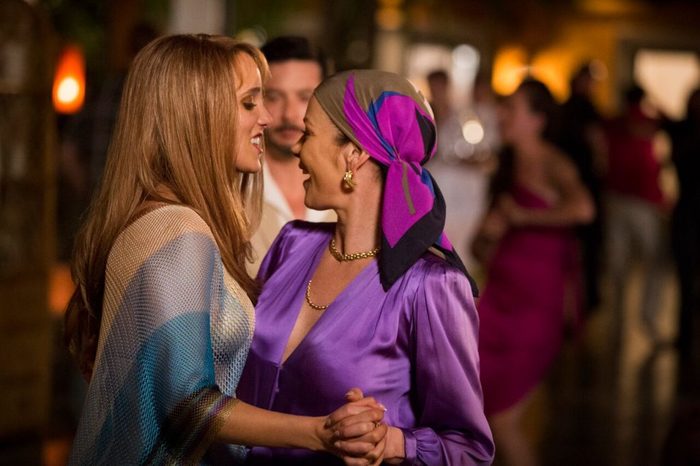 The story of Griselda is ludicrous and arduous. In her early days as an innovator in drug smuggling, she marries Alberto, her first husband, while developing somewhat of a crush on Carolina, a young woman she meets in a nightclub. Up until her wedding night, Griselda’s relationship with Carolina is strictly emotional. She promises to protect Carolina for the rest of her life, and Carolina is wholeheartedly indebted to her, for no visible reason other than the promise of romanceokay, maybe this movie does do queer women justice.

While dancing with her husband at their wedding reception, Griselda can’t stop staring at Carolina. She fully ditches Alberto on the dance-floor to interrupt Carolina, who’s dancing with Griselda’s son. She kicks her son to the curb and grabs hold of her young love. While dancing with Carolina, Griselda slowly and dramatically moves her hand past her waist and on to her butt. Alberto is devastatedbecause it’s their literal weddingand her son is confused.

I’ve seen some pretty terrible lesbian sex scenes, but at least sex is usually implied: hands in dark places, girls going down on each other, and mismatched grinding motions. This scene had zilch. Afterwards, things do not get better for Carolina. She follows Griselda on her insane transformation from drug mule to psychotic, cocaine-addicted murderer, and eventually acquiesces into a polyamorous relationship with Griselda and her husband. We see the two women flirt and kiss on each other a little throughout the movie, but nothing comes close to the brave and provocative wedding night scene. 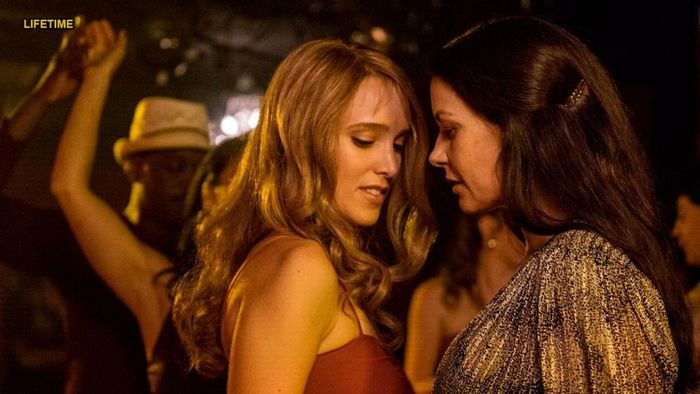 Soon after, Griselda becomes enchanted by another mana co-hort of Pablo Escobarand pulls the same move she pulled on Alberto. To Carolina’s dismay, Griselda succumbs to the seductive dance moves of Darío, and makes out with him right in front of her. Nine months later, she gives birth to Darío’s son, who she endearingly calls Michael Corleoneone of the many heavy-handed ways in which she obsesses over The Godfather franchise.

Outside of nonconsensual polyamory, a series of murders, and quipping things like, “Oh no, this was my favorite blouse!” after getting blood on her shirt from murdering her ex-husband, the movie was also mired in misogyny. From the very beginning, Griselda treats Carolina like a disposable Bond Girl. When they first meet in the nightclub, Griselda tells Carolina that a face that pretty deserves “the good life.” Later, she spoils Carolina with gold watches and asks her what she wants: “Another car? A horse?” Griselda objectifies her, leaves her sitting around the house like used chattel, and tries to wine and dine her with shows of 1970s toxic masculinity.

Honestly, I’m not sure how much of this is a reflection of the real Griselda or the time period, and how much is sexist writing that just isn’t true to (most) women-loving-women relationships.

Not that I’d expect better from this unintentionally hilarious Lifetime drama, but at the end, Carolina falls victim to the Bury Your Gays trope. Cocaine Godmother disposes of Carolina with ease and carelessness. After arbitrarily cutting from a scene where her second husband is murdered, we transition to Griselda in lingerie, kissing from Carolina’s abdomen to her neck. By the time Griselda makes it to her mouth, she suddenly realizes Carolina is dead. She overdosed, we assume, but who cares, I guess.

If you’re looking for a fun, leave-on-in-the-background-type movie that you and your friends can talk over and make a drinking game out of, watch Cocaine Godmother. It’s brimming with harmful tropes, clichés, and frivolous murders. Drink every time a character calls the evil bisexual murderess “La Madrina.”